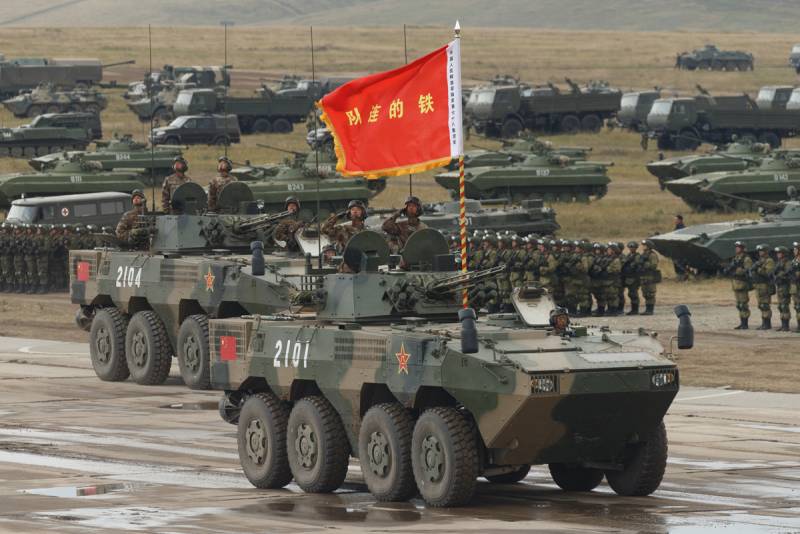 BMP ZBL-08 at the Vostok-2018 exercise. Photo of the Ministry of Defense of the Russian Federation

In order to simplify production and operation, in recent years, projects of unified families of armored vehicles on a common platform are increasingly being proposed. One of the most interesting developments of this kind is the Chinese line of equipment "Type 08", created by the NORINCO corporation. In her case, almost 30 different types of equipment were created on the basis of a single chassis. Some of them have already entered service, while others are still on paper.

Base for the family

The base model for the Type 08 family is the ZBL-08 wheeled infantry fighting vehicle. It was her chassis with minor changes that was used in the construction of all other samples. Moreover, as follows from the available data, the BMP is the most massive representative of the line.

The ZBL-08 is a four-wheel drive vehicle. The armored body provides protection against large-caliber bullets when fired from front angles and against normal calibers from other angles. The front-engine layout is used, which made it possible to free the center and stern of the hull to accommodate the payload - weapons or troops. 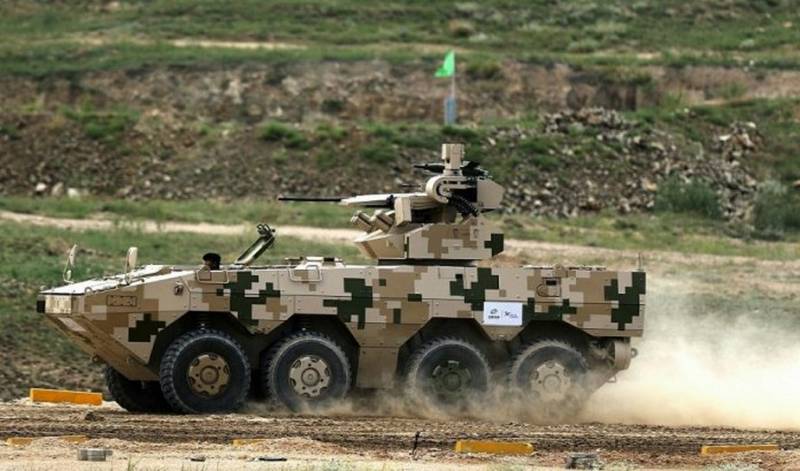 The export version of the VN-1 BMP with other weapons. Photo by NORINCO
The chassis is equipped with a 6 hp Deutz BF1015M440C diesel engine. Semi-automatic transmission distributes torque to all wheels. Forage water cannons for swimming are provided. The chassis "Type 08" provides speed on the highway up to 100 km / h and on water up to 8-10 km / h. The power reserve is about 800 km.

In the BMP configuration, the troop compartment with aft exit accommodates 7 people. In front of him is a fighting compartment with a tower. BMP ZBL-08 is armed with a 30-mm cannon, a copy of the 2A72, and a machine gun. The use of HJ-73C missiles is also possible. Modern optical and optical-electronic means are used to control the fire.

The ZSL-08 wheeled armored personnel carrier was created directly on the basis of the ZBL-08. It is distinguished by the increased height of the troop compartment, and also carries other weapons and can accommodate 10 soldiers. The armored personnel carrier is equipped with a compact, open-top turret with a large-caliber machine gun. Despite the change in key parameters, the characteristics of the car remained the same. 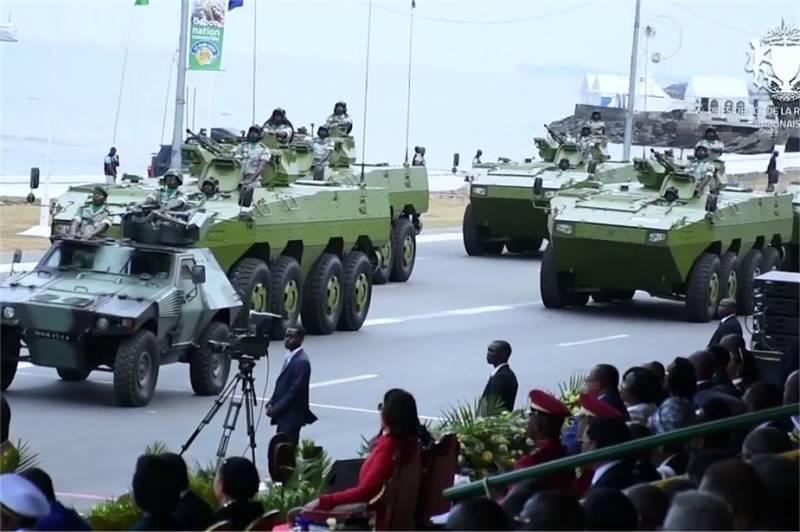 VN-1 of the Gabonese Army. Photo of AP Gabon
Also noteworthy is the Type 08 command and control vehicle. It is distinguished by a superstructure over the troop compartment and the lack of advanced weapons. In addition, various communication equipment and its antenna systems are installed on it.

Some of the projects of the "Type 08" family are made on the chassis of the base BMP. In other developments, an armored personnel carrier chassis with a different body is used. Also, a number of special equipment turned out to be more profitable to do in the KShM building. This approach provides certain engineering and manufacturing advantages. The design results in various samples weighing from 15-17 to 23-25 ​​tons with similar characteristics.

The greatest "popularity" within the family is the BMP chassis. On its basis, a reconnaissance vehicle, several samples of self-propelled artillery and engineering equipment were created.

ZSL-08 armored personnel carrier. Figure Tanks-encyclopedia.com
BRM "Type 08" is an infantry fighting vehicle with some new equipment. In addition to the standard systems, a telescopic mast with a compact radar and an optoelectronic unit is installed on the tower. BRM is capable of monitoring the terrain and at the same time retains the firepower of the BMP.

The PLL-09 self-propelled howitzer with modular armament architecture is offered. A large unified turret can be equipped with a 122 or 155 mm gun with a barrel up to 52 calibers. The ZTL-11 "wheeled tank" is built in a similar way, but it uses a 105mm rifled gun. This vehicle is intended for direct fire and subunit fire support. The self-propelled artillery subfamily also includes the PLL-120 05mm mortar. Weapon is located inside the fighting compartment and fires through an open sunroof.

In the field of anti-aircraft artillery, the Type 09 self-propelled gun was first presented. It is armed with a 35mm autocannon and carries radar and optical surveillance equipment. Later, an export version of the ZSU was developed, distinguished by the presence of short-range missiles. The CS / SA5 self-propelled gun, armed with a six-barreled automatic cannon, is of great interest. 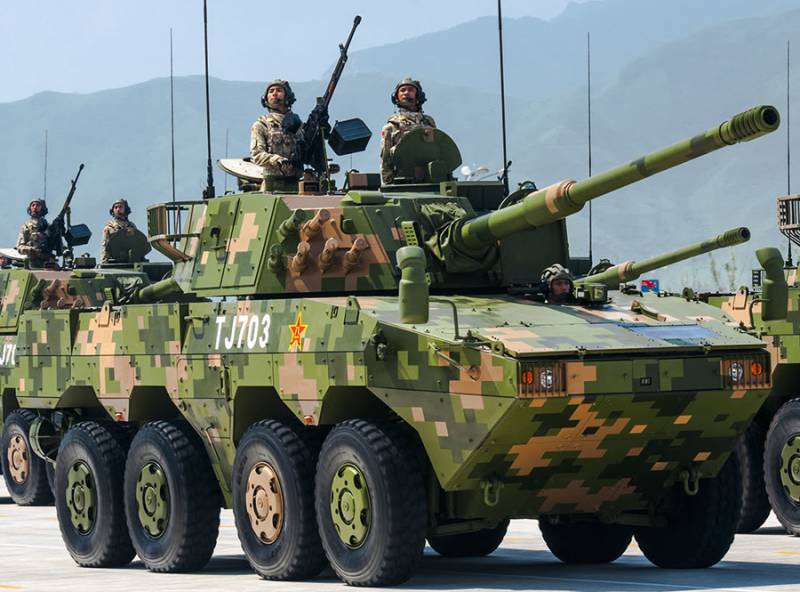 "Wheeled tank" ZTL-11. Photo Tanks-encyclopedia.com
Also BMP became the basis for special and engineering equipment. By installing the appropriate equipment, it was turned into a repair and recovery vehicle, an engineering barrage vehicle, and even a bridgelayer. Also in this subfamily there is a multipurpose armored transport - but it was made on the basis of the ZSL-08 armored personnel carrier with a more voluminous troop compartment.

The revised KShM Type 08 hull has found application in a number of projects. First of all, a specialized communication machine was built on its basis. It is equipped with equipment for communication at the level of a tank or motorized rifle battalion. An electronic warfare machine has also been developed. Against the background of other samples, it stands out with antennas of a characteristic shape, lying on the roof in the stowed position.

An ambulance with a spacious compartment for the wounded was created on the basis of the KShM. These passengers can be seated or loaded onto a stretcher. A place for a physician and some medical equipment is provided. Another development on the same basis is a radiation, chemical and biological reconnaissance vehicle equipped with the necessary sensors, a marking device, etc. 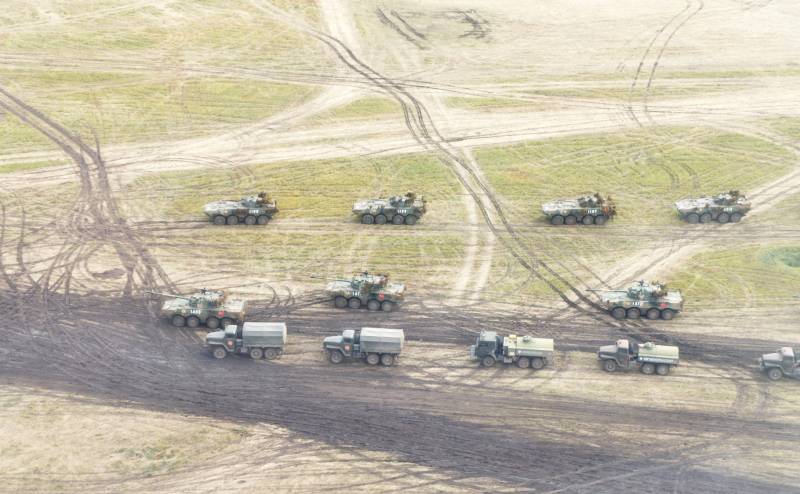 BMP and fire support vehicles during the Vostok-2018 exercise. Photo of the Ministry of Defense of the Russian Federation

The "Type 08" family was created not only for the PRC's own needs, but also for sale to third countries. Foreign buyers can be offered both existing modifications of equipment and special export developments. Some of them have already become the subject of contracts.

The base BMP ZBL-08 is supplied abroad under the name VN-1 or VN-1C. The letter "C" indicates the presence of guided missiles. Sold ZSU SWS-2 - version "Type 09" with the preservation of the standard gun and the installation of missiles.

The export SH-09 is based on the PLL-11 howitzer self-propelled gun. It uses only a 155-mm gun with a barrel length of 39 clb, which makes this installation a direct competitor to well-known foreign models. For the same purpose, the ST-1 fire support vehicle was created, armed with the British L7 cannon or its copy. 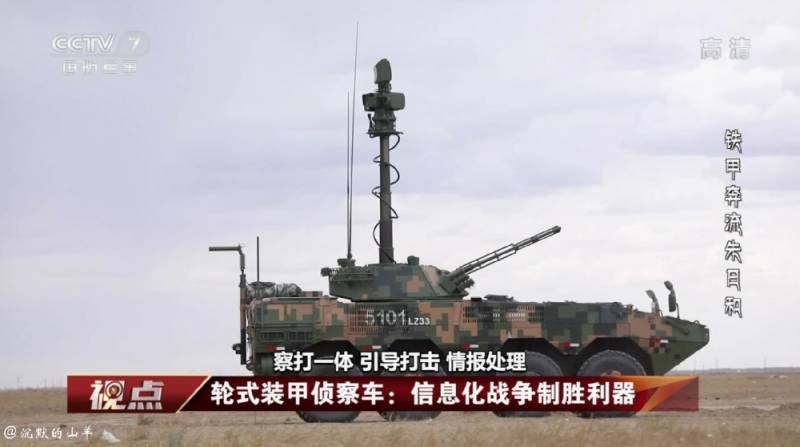 Family in the army

Armored vehicles of the "Type 08" line were developed primarily in the interests of the PLA, and it was she who became the first customer and operator. Serial production of BMPs and other vehicles has been going on since the end of the XNUMXs and has led to very interesting results by now.

According to the IISS The Military Balance 2020, the PLA currently has 1600 infantry fighting vehicles and 500 armored personnel carriers of the Type 08 line. Active deliveries of ACS ZTL-11 are underway - the troops already have 800 units. such a technique. Delivered 350 PLL-09 self-propelled guns with 122 mm cannon; there is no information about 155 mm self-propelled howitzers.

Equipment "Type 08" is supplied to foreign countries. The first buyer was Venezuela. For her Marine Corps, she acquired 11 VN-1 BMPs. New orders for armored vehicles of the line have not yet followed. Last year, the Gabon army first showed its new VN-1. The volume of this order is unknown, but at least 5-6 vehicles are mentioned. 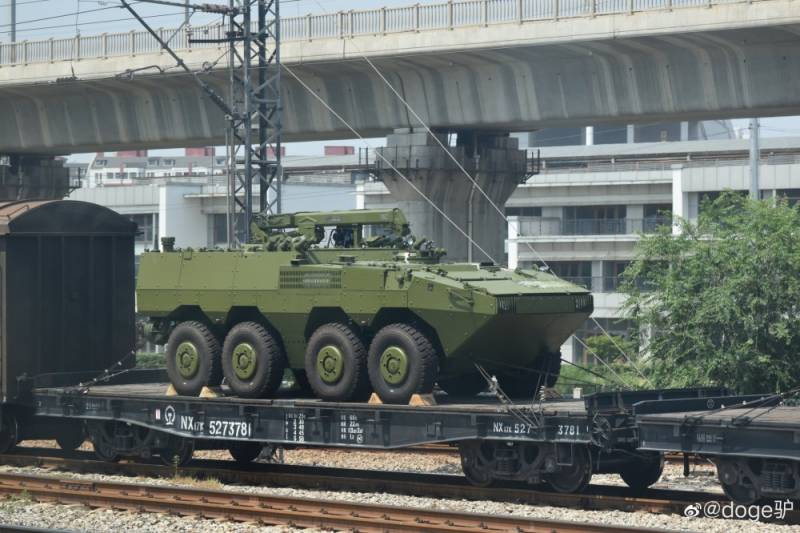 A transport vehicle based on an armored personnel carrier. Photo Sina.com.cn
The Royal Thai Army became a profitable customer. In 2017, she ordered 38 infantry fighting vehicles and armored vehicles. In 2019, a second contract appeared, for 41 armored vehicles. At the beginning of December last year, the customer received the first batch of equipment. Deliveries will continue until 2021. It should be noted that Thailand bought not only the equipment of the "Type 08" family. The existing package of contracts provides for the supply tanks and heavy ARVs.

The idea of ​​developing a unified platform for the subsequent creation of armored vehicles for various purposes is no longer a novelty and is actively used by different countries. China strives to take into account current trends and use them both for its own needs and for export. A very interesting result of this approach is the Type 08 family.

The wheeled chassis, which has become the basis of the line, has a number of characteristic features. Its power plant and undercarriage were originally designed taking into account the maximum loads corresponding to the largest combat masses and the most powerful of the planned weapons. Inside the hull, maximum space is allocated for the "payload" - first of all, troops and combat modules. At first, all the advantages of such a chassis were realized during the construction of infantry fighting vehicles and armored personnel carriers, and then an ACS, ZSU, KShM, etc. were created on its basis. 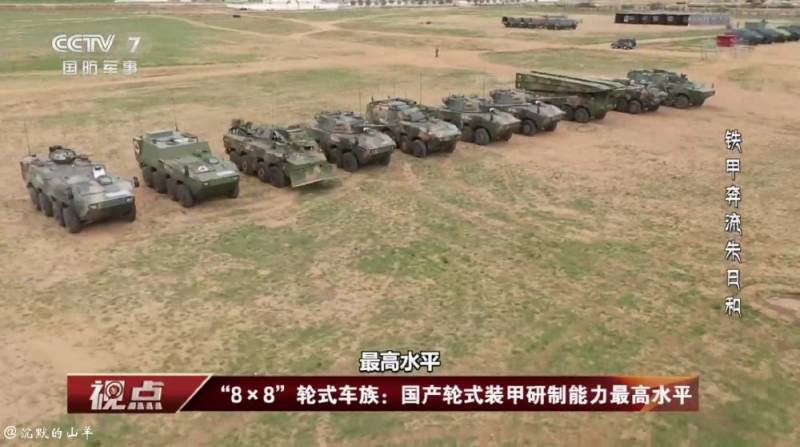 Various samples of the family. Still from CCTV report
Within the “Type 08” family, almost 30 projects of equipment of different classes and different purposes have been created. Some of these projects have reached the series and service; others are unlikely to get out of the development stage. The equipment is produced in large quantities in the interests of the PLA and foreign armies.

Apparently, the number of Type 08 vehicles in China's own army will continue to grow and new foreign orders may appear. All this shows that the concept of armored vehicles of different classes on a single platform justifies itself and is really of interest for different armies. However, foreign orders for it are not yet received too often.

Ctrl Enter
Noticed oshЫbku Highlight text and press. Ctrl + Enter
We are
Armored vehicles of Ukraine: results, potential, prospects ...Is the "old" well forgotten to become the "new"? Part-2. At the call of honor and duty
Military Reviewin Yandex News
Military Reviewin Google News
21 comment
Information
Dear reader, to leave comments on the publication, you must to register.