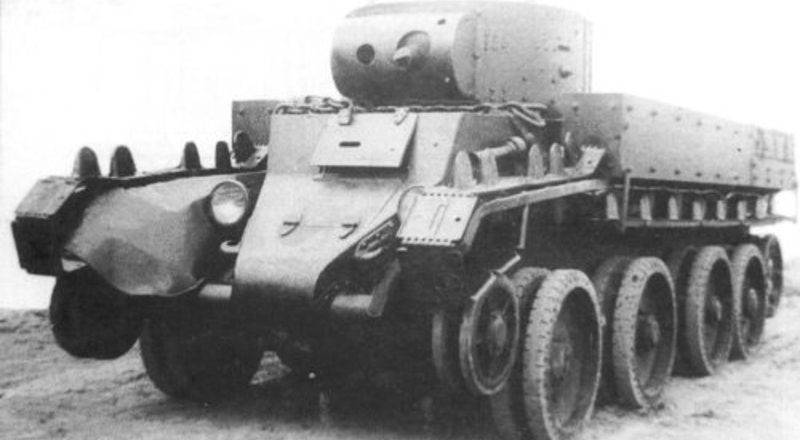 HBT-7 wheeled. Part of the tracks are suspended under the shelves

In the thirties, Soviet engineers worked on the direction of chemical tanks... As part of an extensive program, several variants of such equipment were developed based on the BT series tanks. Early examples of this kind carried smoke equipment or flamethrowers, which allowed them to solve various problems. Then they created the HBT-7 tank, capable of performing both flamethrowing and smoke release.

The BT series tanks became the basis for chemical vehicles in the mid-thirties. The first projects of this kind provided for the installation of a flamethrower or tank smoke equipment. So, light chemical tanks HBT-2 and HBT-5 could hit targets with a jet of burning liquid or machine gun fire. At the same time, another tank was created, called the HBT-5, on a similar base. With the help of a standard TDP-3 device, he could set up smoke screens, and used a machine gun for self-defense.

The processing of BT tanks into chemical vehicles provided for the removal of some of the units, main armament and ammunition storage with the subsequent installation of new devices. The resulting vehicle retained its external resemblance to the base model and had similar tactical and technical characteristics. At the same time, there was a certain margin for modernization.

A logical continuation of the already implemented ideas was the combination of smoke and flamethrower equipment on one chassis. Such a sample was developed in 1936 at the SKB of the Compressor plant, which already had extensive experience in the development of chemical armored vehicles and systems for it. The new tank was based on the BT-7 design, as a result of which it received the HBT-7 index. The designation HBT-III is also known, indicating the serial number of such a development.

During the development of the new project, the basic BT-7 retained the hull, turret, power plant and chassis. At the same time, the 45-mm gun and its ammunition, as well as the radio station, had to be removed. The project involved the use of fenders to install new units. For this reason, the removed tracks were proposed to be transported not on the shelves, but under them.

Inside and outside the hull and tower, various devices and devices from the KS-40 chemical system developed by SKB Kompressor were mounted. 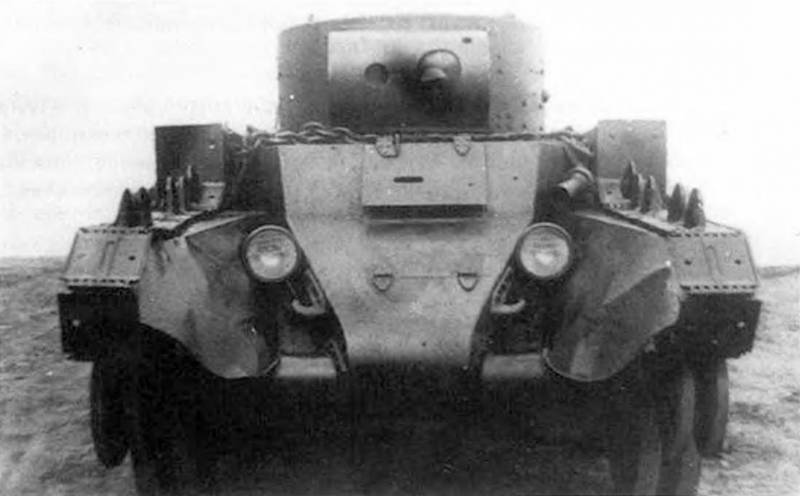 The turret retained the standard 7,62 mm DT machine gun. The gun mount was used to mount a flamethrower. The flamethrower hose was equipped with an armored casing-mask. It was equipped with a pneumatically actuated Pitot shut-off valve. The ignition was carried out with two candles powered by the tank battery.

A pair of nozzles was placed on the roof of the engine compartment for spraying a toxic substance, degassing or smoke mixture. The pipes to the nozzles were located next to the exhaust manifolds, which provided heating of the chemicals and made it possible to efficiently spray them at any ambient temperature.

The liquid payload was transported in two tanks with a capacity of 300 liters. They were placed on fenders inside casings made of 10 mm armor and connected to a common system using pipelines. The supply of liquids to the fire hose or sprayers was carried out using a pump and other devices. HBT-7 could take on board only one type of liquid chemicals to solve a particular problem. The tank could either attack the enemy with a fire mixture, or treat the area with chemicals.

The KS-40 flamethrower provided the release of the burning mixture at a distance of up to 70 m. The liquid supply was enough for several dozen shots. 600 l of the smoke mixture allowed the curtain to be put on for 40 minutes. Feed sprayers were used to contaminate or degass the area. At an optimal speed of 12-15 km / h, the tank could process the CWA in a strip up to 25 m wide. Degassing was carried out in a strip of 8 m.

The removal of part of the standard equipment made it possible to lighten the base chassis, but the new equipment fully utilized this load capacity and even went beyond it. The original BT-7 weighed 13,7 tons, while its chemical version - 15 tons. The increase in mass hit the mobility. The average speed on tracks was reduced to 16,5 km / h, on wheels - to 21 km / h.

In 1396, "Compressor" prepared an experimental tank HBT-7 and brought it to the test. It was found that the resulting armored vehicle is capable of solving the assigned tasks, but its characteristics are far from ideal. There were a lot of problems of various kinds that made it difficult to operate or worsened the overall potential. 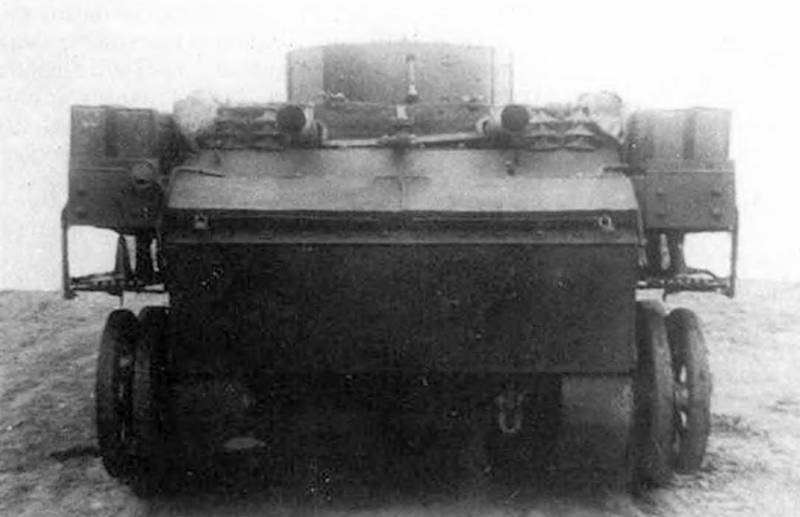 One of the main problems of the HBT-7 was its excess weight. The power plant was still able to cope with the loads, but the speed and cross-country ability on the ground dropped. Also, the load on the chassis increased, and its maintenance and adjustment were now more difficult.

The chemical apparatus, in turn, showed high performance. The flamethrower made it possible to hit targets at the required ranges, and the spray devices ensured effective treatment of the terrain. However, insufficient tightness of the pipelines appeared, which could lead to the leakage of dangerous liquids, which threatened the safety of the crew.

Tanks HBT-7 could accept only one type of liquid at a time and, accordingly, the tank could solve only one combat mission. To perform another, it was required to drain the liquid cargo, process the tanks and refuel, which took a lot of time. Thus, the formally universal chemical tank did not differ in particular flexibility of use and ease of operation.

There were also problems with weapons for self-defense. Recycling tower weapons led to the fact that the DT machine gun lost the ability to aim fire.

According to the test results, the HBT-7 chemical tank was criticized and did not receive a recommendation for adoption. At the same time, the built prototype was handed over to the Red Army for trial operation. With his help, the troops had to gain experience for the subsequent development of the expected serial equipment. 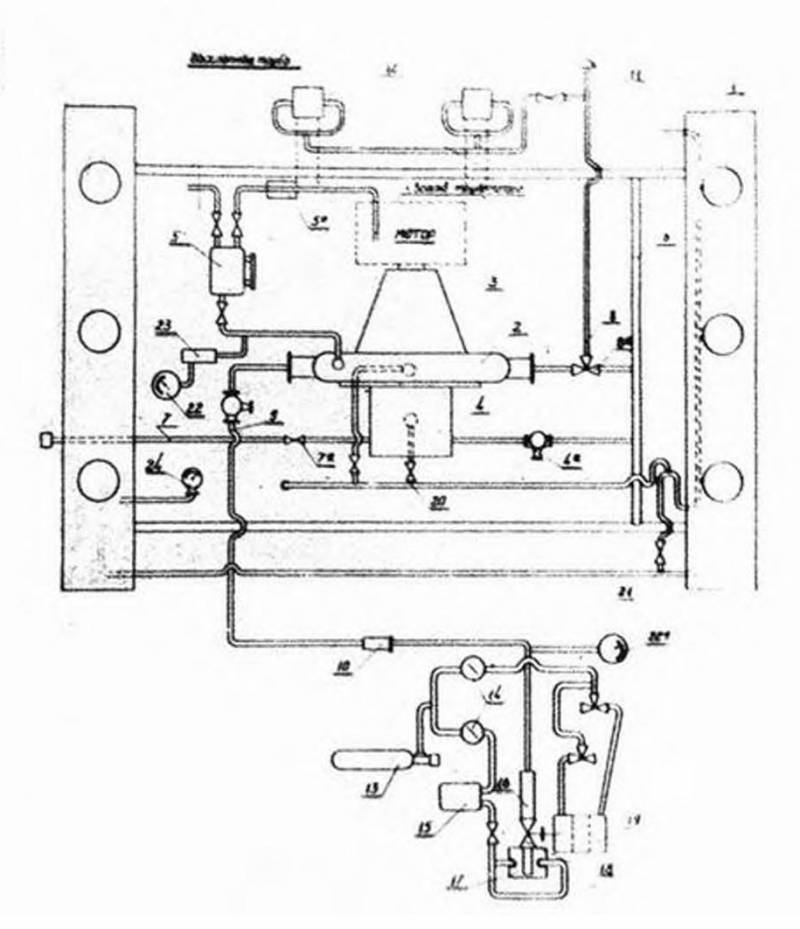 Scheme of chemical equipment KS-40, built using a pump
Already in 1937, the Kompressor plant developed an improved version of the chemical apparatus called KS-50. The main feature of this project was the abandonment of an engine driven pump, instead of which a pneumatic displacement system based on a compressed gas cylinder was now used. In addition, the tanks were slightly altered. Their total capacity was increased by 50 liters.

Soon an experienced HBT-7 appeared with KS-50 equipment. It was built on a new serial assembly chassis - the first prototype was not altered. Tests have shown that the KS-50 system is easier to operate and much more efficient than the previous KS-40. With the same level of performance, the upgraded HBT-7 was simpler and more reliable. However, the problems with the weight of the armored vehicle and the loads on the chassis were not resolved.

Tests of two experimental HBT-7 showed the fundamental possibility of building a chemical tank with a flamethrower and spray equipment. At the same time, they demonstrated insufficient characteristics of the BT-7 chassis. Important conclusions were drawn based on the results of the HBT-7 / HBT-III project and other developments.

It was decided to stop the development of the HBT-7 project due to the impossibility of obtaining the desired results when using the available components. It was also decided to abandon the idea of ​​a universal chemical tank carrying a flamethrower and smoke devices. As a result, the HBT-7 turned out to be the first and last Soviet model of its kind. In addition, they abandoned further work on specialized tanks with smoke extinguishing equipment - it was proposed to mount such means on linear tanks.

Two built chemical tanks on the basis of BT-7 with KS-40 and KS-50 equipment were transferred for trial operation to one of the units of the Red Army. The mastery of this technique and the accumulation of the necessary experience continued for several years. The last mentions of two chemical tanks date back to the end of 1940. It is not known whether the experienced HBT-7s managed to stay in service until the start of World War II and take part in battles. However, the limited technical and operational characteristics would not allow them to realize their full potential.