"Stop, I will dazzle!" Combat lasers warn one last time 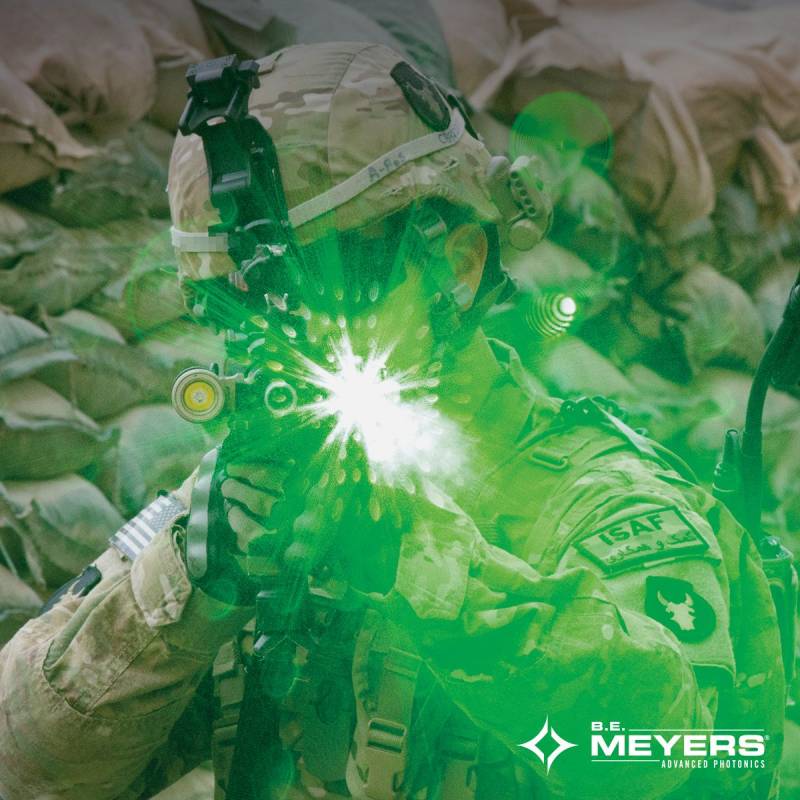 Imagine a conditional checkpoint and a conditional car approaching it, very reminiscent of a terrorist chariot. How do I warn my car to stop at a safe distance? Screaming is useless, turn from automatic weapons or single shots into the air also do not always enlighten offenders. The way out seems to be found in the USA. For more than fifteen years, BE Meyers has been developing non-lethal small-sized lasers capable of temporarily neutralizing enemy activity. And at the same time to warn about the possible use of lethal weapons against him. Thrifty Americans note that a few warning green laser flashes are much cheaper than warning shots. I would like to add, it is also ecologically cleaner: no powder gases into the atmosphere and no toxic lead in the soil. 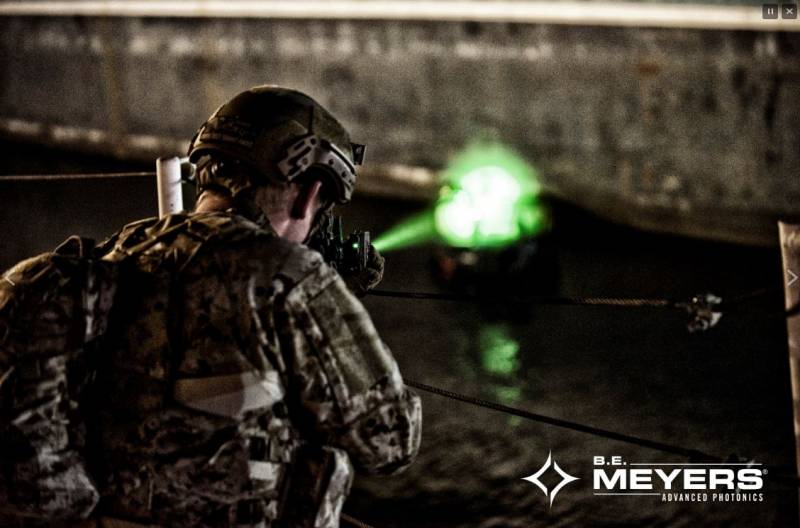 Source: soldiersystems.com
Now the US army in Afghanistan and Iraq uses about 12 thousand GLARE MOUT Plus portable lasers, capable of convincing a foreign-language enemy of the seriousness of their intentions. In total, the military operates more than 36 thousand different emitters not only from BE Meyers, but also from Thales. The Americans are positioning the gadget as the previously missing link between verbal and non-verbal warnings and the opening of fire to kill. The GLARE MOUT Plus, which can be attached to the M4, M16A4 and M27 automatic rifles, is based on the generation of green laser flashes with a wavelength of 532 nm. This length was not chosen by chance. The human eye is most susceptible to the green range. Remember the "interface" of night vision devices and sighting optics. The maximum sensitivity of an eye adapted to daylight lies near the length of 560 nm, and for an eye adapted to night it is about 510 nm. Developers from BE Meyers with 532 nm have chosen a universal sweet spot. Even in the daytime, the green end of light is able to unambiguously make it clear to a person that he is required not to come closer. It seems that there is no need to explain what effect such a laser show has in the dark. If non-lethal laser weapons will at least slightly reduce civilian casualties from "friendly" American fire, it may well be possible to erect a monument to it. According to the developers, until 2005, an average of 1 civilian was killed at checkpoints in Iraq per day, and after that the figure was 1 killed per week. Was it really a consequence of the use of laser "scarecrows" or these are the features of marketing statistics, is not fully known. 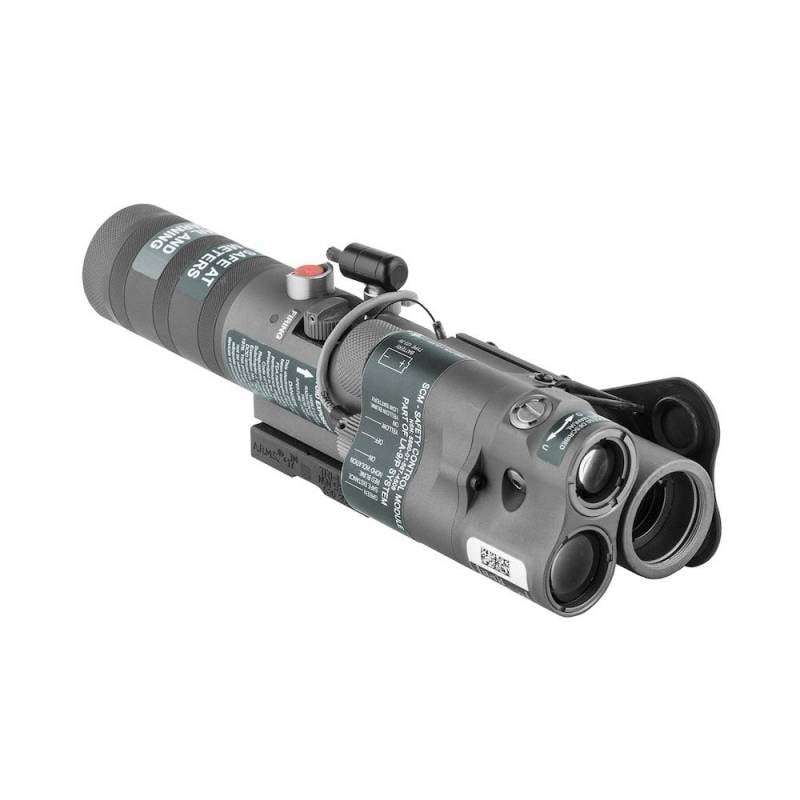 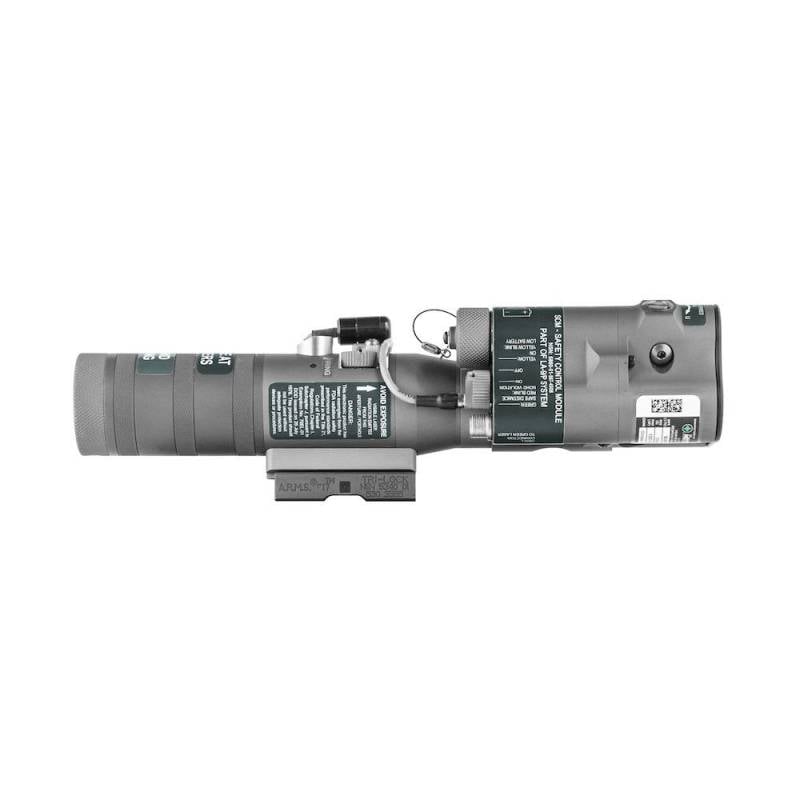 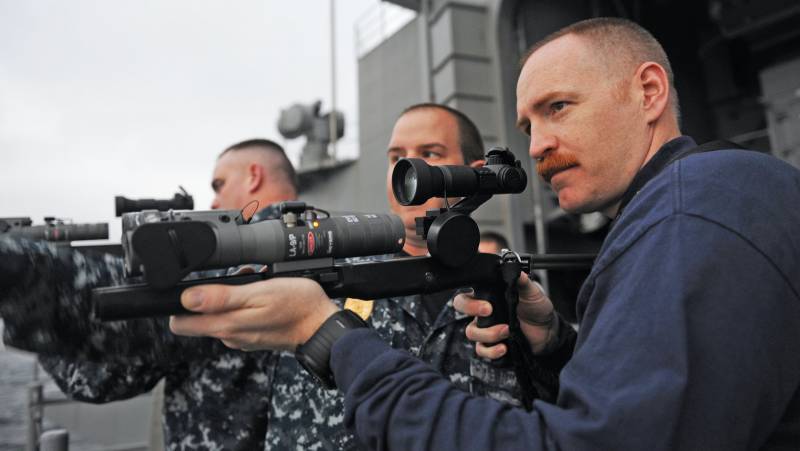 Sailors master the GLARE LA-9 / P on the aircraft carrier Nimitz. Source: thedrive.com
Non-lethal "laser pointers" BE Meyers are able not only to scare away and warn, but also to temporarily blind the enemy. According to the developers, laser flashes aimed at a person's eyes at a distance of up to 600 meters can both disable vision for a while and disorient them. Users will not have any difficulties with aiming the laser emitter at the target: at maximum distances, taking into account the beam divergence of 0,45 degrees, the spot diameter will be about 15 meters. This can cover a group of goals. The development program is called the Ocular Interruption System (OIS), and is not limited to one implementation.

The GLARE LA-9 / P device is more powerful, capable of reaching a potential enemy at a distance of up to 4 km at night and 1,5 km during the day. The laser energy at such ranges, of course, is already quite capable of damaging the retina, so the developers had to create an automatic power control system. With the help of a rangefinder, the emitter determines a safe distance to the biological object and accordingly adjusts the power in order to only frighten, but not permanently deprive of sight. It can be used both as an attachment to small arms and as an independent device. At the moment, there is information that in the United States, these lasers are armed not only with the marines, but also the crews of submarines and surface ships. The approach of small boats to US warships can be regarded as one option for an asymmetric threat (read: from Iran), so a small laser show near such objects may become common in the future. If this warning turns out to be insufficient, people on the boat will be purposefully blinded to make them more convincing. Few? Then already fire to kill.

The mechanism of action of a non-lethal laser on vision causes both loss of vision immediately at the moment the beam enters the eye and the formation of an afterimage (trail image, shadow image) that remains in the field of view after the laser is turned off. The laser can burn the retina only when the power exceeds 500 mW and the exposure time is several milliseconds. And if the power suddenly jumps 20 times, then the laser will cause hemorrhage in the fundus in a nanosecond. 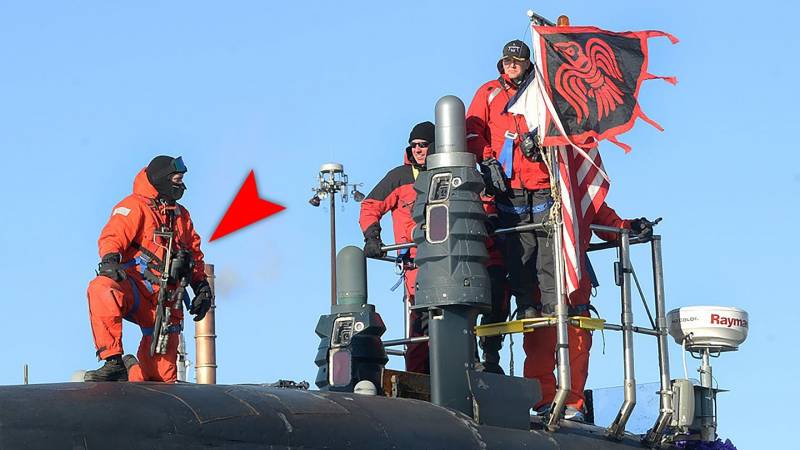 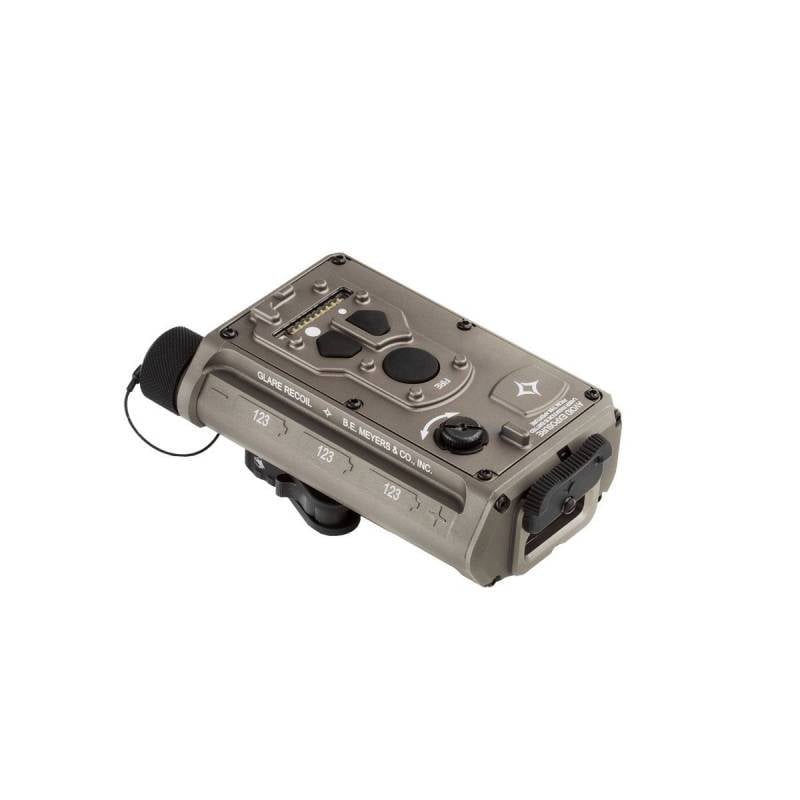 GLARE RECOIL by BE Meyers. Source: bemeyers.com
For the marines and military sailors BE Meyers created a small-sized laser with a range of up to 20 km, that is, in fact, at the line-of-sight limit. At ranges from 2 to 4 km, the device can both suppress and blind a biological object for a fraction of a second, and at a distance of 4 to 200 meters it can cause temporary blindness. This is GLARE RECOIL and, judging by the range, can blind not only the terrorist, but also the pilot of the enemy aviation.

Russia has also developed and adopted a laser repelling emitter capable of stopping an intruder and even making it difficult to aim with a weapon. This is a torch "Potok" from the St. Petersburg NGO of special materials, which was adopted by the Ministry of Internal Affairs of Russia. The emitter is compact, weighs only 180 grams and, if necessary, is mounted on small arms. The laser dazzles biological objects at a distance of up to 30 meters, and warns at a distance of up to 100 meters. The developers point out the versatility of Stream. The flashlight can not only frighten and temporarily deprive of sight, but also determine at a distance metal objects by their characteristic luster, give signals and indicate targets. Signals can be sent at a distance of up to 10 km. A characteristic feature of the domestic laser is the red color of the beam - the wavelength is in the region of 635-660 nm. 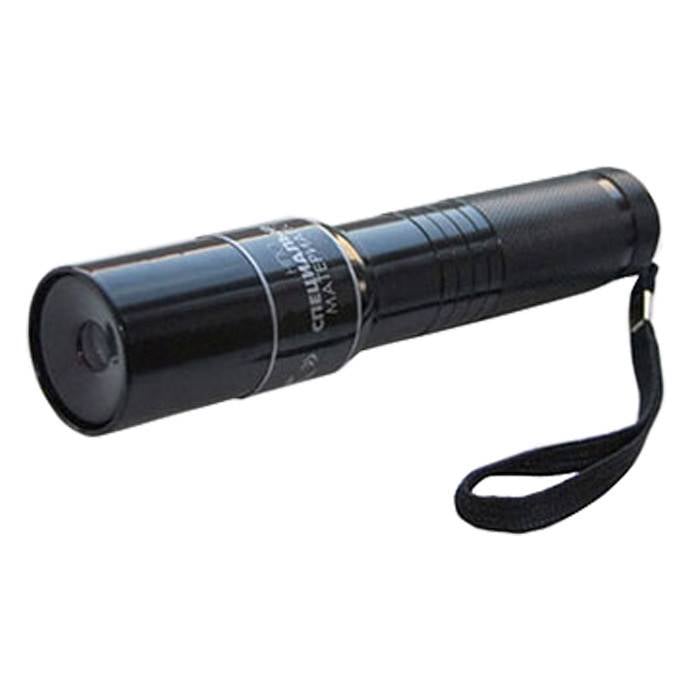 Russian laser torch "Potok". Source: vpk.name
No matter how much the Americans praise their non-lethal lasers, the technology has a number of undeniable drawbacks. First of all, this is the use of mainly one frequency, which is leveled by protective goggles with special filtering glasses. In addition, emitters work well only in hot climates: most often the operating temperature range varies from -5 to +50 degrees. And only the most perfect are able to withstand twenty-degree frosts. In any case, the use of a laser show in order to warn and temporarily blind is effective only against a less equipped enemy. In a conflict of developed states, such means will rather have a police function - to keep territories under control.