What could be a BMPT "Terminator-3"? 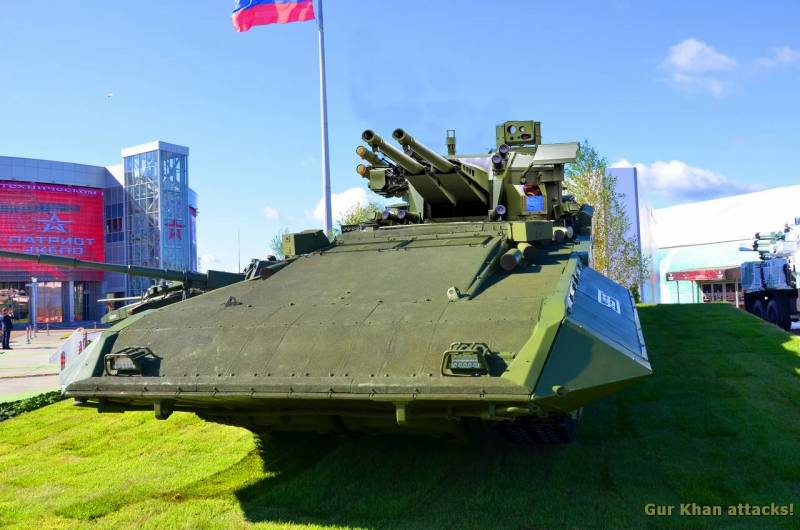 "Fantasy on a theme": TBMP T-15 with two 57-mm cannons. Collage from Gurkhan.blogspot.com

For many years, Russian industry has demonstrated a support combat vehicle at exhibitions tanks (or combat vehicle fire support) "Terminator". The first contract for the supply of such machines appeared only in 2017 and was soon completed. At the same time, the industry has already begun developing a new version of BMPT / BMOP - "Terminator-3". This project can be completed in the very near future.

Since the beginning of the tenth years, the possibility of creating new versions of the "Terminator" with certain features has been regularly mentioned. In particular, at the level of general thoughts and rumors, the construction of an BMPT on the promising Armata platform appeared. However, until a certain time, no official information on this matter was received.

In the spring of 2016, the management of the NPK Uralvagonzavod spoke about their plans to develop a new BMPT based on the Armata with the working title Terminator-3. At that time, almost 30 samples of equipment for various purposes were created on the basis of this platform, and one of them was to be a fire support vehicle. The new project also planned to use new developments in the field of weapons. It was proposed to replace the 30-mm cannon with the 57-mm system.

Soon, UVZ clarified that several options for the appearance of the new BMPT based on different chassis and with different weapons were being worked out. The final appearance of the car was to be determined by the customer. At the same time, a full-fledged development of the project was not carried out at that time. It was planned to start after receiving the order for "Terminator 2". 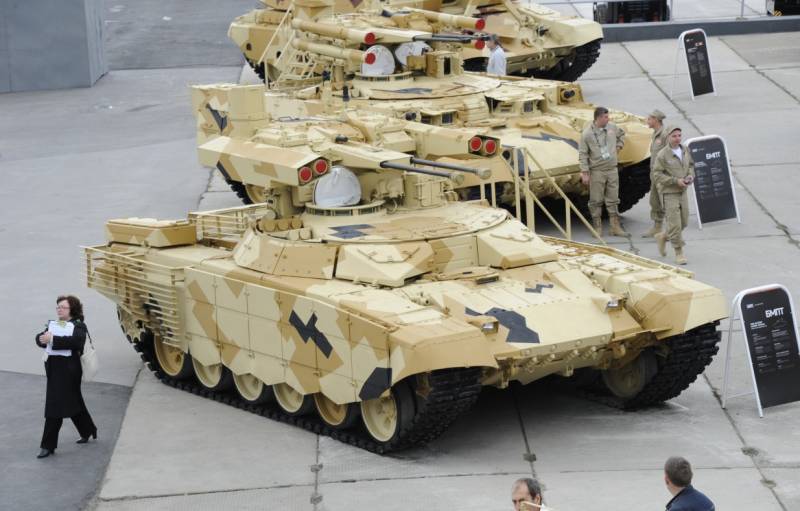 A late version of The Terminator is on display. Photo by NPK "UVZ"
In November of the same year, UVZ published a book dedicated to the 80th anniversary of the enterprise. In this edition, a new modification of the Terminator was again mentioned - based on the Armata, with two 57-mm cannons and guided missiles.

In 2017, several BMPTs were tested in Syria. In the same year, the Ministry of Defense ordered the delivery of 12 BMPTs of the current modification, and the next year the finished vehicles were shown at the Victory Parade. Probably, in the wake of these events, UVZ began work on the formation of the appearance of "Terminator-3".

At the beginning of 2019, a surge of interest in Terminator-3 was again observed in the domestic and foreign media, but this time no new data was published. NPK Uralvagonzavod was also silent. Hopes for a demonstration of the new BMPT at the Army-2019 forum did not come true. This year, a similar sample was also not announced.

The current status of the Terminator 3 project remains unknown, and there is not much information about it. However, already now you can imagine what such an BMPT could be and how it will differ from its predecessors. The innovations announced earlier point to the most serious benefits of various kinds.

"Terminator-3" can receive the chassis of serial T-72 or T-90 tanks, but such a machine on the Armata platform is of the greatest interest. It is a versatile tracked chassis with combined armor and an engine with an output of 1200 to 1800 hp. The chassis architecture allows mounting various target equipment, incl. combat module "tank support". 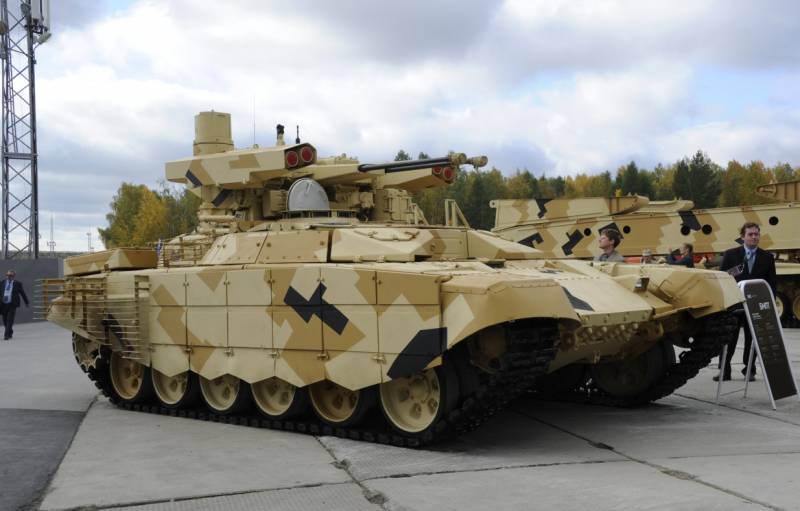 The same car from a different angle. Photo by NPK "UVZ"
It can be assumed that "Terminator-3" will retain all the means of protection inherent in "Armata". Its own armoring of the hull will be supplemented with reactive armor "Malachite" and active "Afganit". The crew will remain inside the hull, so the combat stability and survivability will remain at a high level.

The first "Terminators" have a turret of a characteristic design with a remote mounting of weapons. The new BMPT could retain this architecture - adjusted for the change weapons... It is possible to use one or two 2A91 57 mm cannons developed by the Central Research Institute "Burevestnik", which has already found application in a number of projects. Combat characteristics can be increased by using new types of shells.

For "soft" targets, the machine gun must be preserved; it is possible to use automatic grenade launchers. The installation of guided anti-tank missiles is mandatory. It can be the "Attack" complex, as on the current BMPT, or the "Cornet", which is now entering the troops.

The armament will have to be installed on a completely uninhabited tower, which imposes some restrictions on the formation of a complex of optical means and a fire control system. However, similar developments are already available and used in the T-14 MBT project. 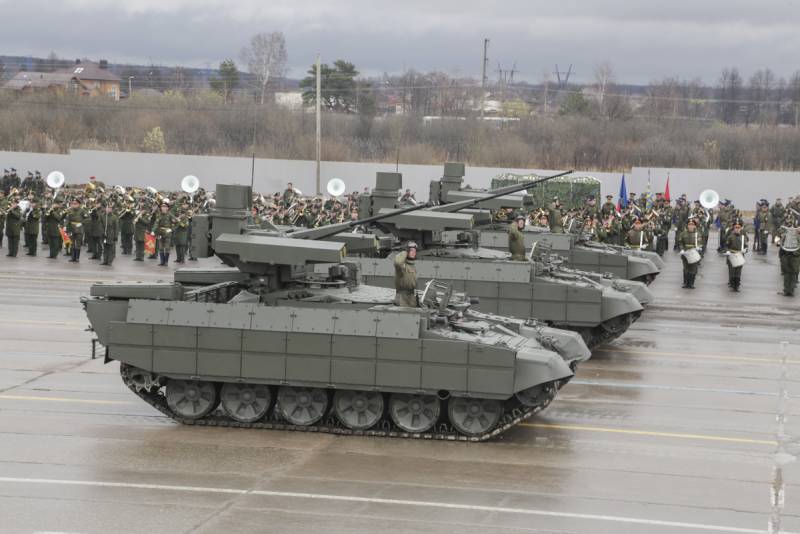 First Army Terminators in training before the Parade. Photo of the Ministry of Defense of the Russian Federation

The use of the Armata platform promises significant advantages. It can help increase the mobility of the BMPT, as well as reduce risks when working on the front lines. The distinctive layout improves crew protection. An important feature of such a platform is the open architecture of the onboard equipment. This simplifies the creation or modernization of samples for various purposes, incl. BMPT.

The use of 57-mm guns instead of the existing 30-mm 2A42 will lead to obvious advantages. By increasing the caliber, it will be possible to increase the firing range and the power of the shells. In addition, according to the experience of the Baikal project, it is possible to introduce new functions such as programmable detonation. With such a weapon, Terminator 3 will become even more dangerous for any objects on the battlefield.

According to various sources, the new BMPT / BMOP can receive one or two larger caliber guns. Which option is more interesting to the army is unclear. Both have their own advantages and disadvantages. Two cannons will provide an increase in the rate of fire and firepower, but will increase the mass of the gun mount and require more ammunition. The question of the number of weapons should be decided at the stage of developing the technical specifications.

Machine-gun and guided missile weapons on the BMPT have confirmed their capabilities both during long-term tests and during deployment in a real conflict zone. With their help, "Terminator-3" will be able to fight manpower at short distances and with heavy equipment at maximum. 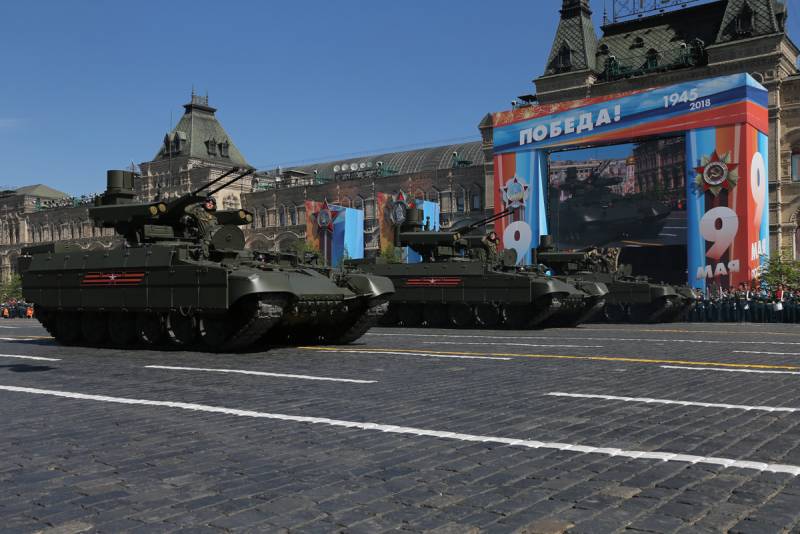 BMPT on Red Square. Photo of the Ministry of Defense of the Russian Federation
BMPTs of the first modifications with 2A42 cannons and "Attack" missiles are capable of hitting targets at ranges of up to 4 and up to 8 km, respectively. Terminator 3 with 2A91 and Kornet will increase these characteristics to 16 and 10 km. At the same time, the number of target channels does not change.

In general, BMPT / BMOP "Terminator-3" on a new base and with new weapons has great prospects and may be of interest to both Russian and foreign armies. However, the realization of the potential of such a machine is hampered by one "trifle" - the project is not yet ready. Moreover, not only the timing of its appearance, but also the very likelihood of successful completion of the work remains unclear.

In the recent past, NPK Uralvagonzavod has repeatedly raised the topic of creating an updated BMPT, but recently there have been no new messages in this regard. The Ministry of Defense also does not address this topic and does not show an obvious interest in the new Terminator. It should be remembered that this machine for a very long time could not get into the army, and after the order of the first batch of new purchases did not follow. It is not known whether the new BMPT will succeed in becoming more widespread.

It is very likely that UVZ will soon present the first real materials on the next version of BMPT, and they will contain all the most interesting details. However, the timing of such a presentation is unknown. "Terminator-3" can be presented at the next exhibitions this year or later - if the project is completed and they decide to show it publicly.

Thus, around the developed BMPT / BMOS "Terminator-3" there is an ambiguous situation. This project, judging by the declared characteristics and features, is of great interest, at least in terms of technology and capabilities. It is quite capable of arousing the interest of potential customers in the face of our army or other states. However, the development of this BMPT is delayed, and the hypothetical adoption into service is postponed indefinitely. Time will tell whether it will be possible to change this situation and give the army all the new opportunities and advantages.