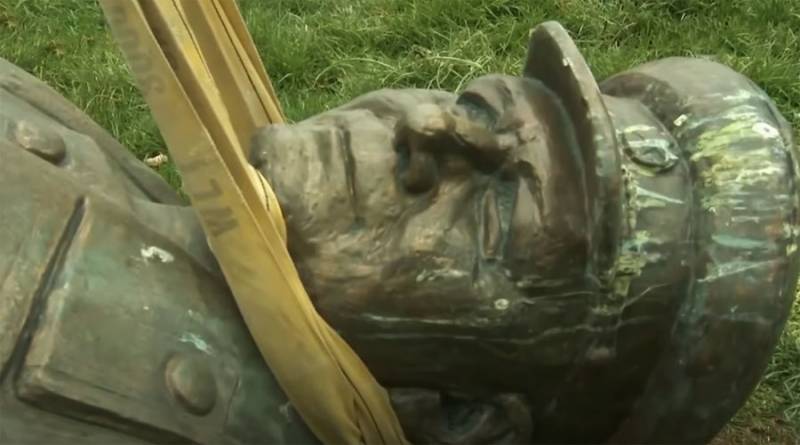 The Czech press published an article by the observer David Klimes about the situation with monuments in the country. The journalist writes that, removing the monuments from the pedestals, in the Czech Republic they are only now beginning to think about who should be erected instead of them.


According to the author of Aktualne, David Klimes, 30 years after the complete collapse of the socialist system in the Czech Republic, they have not been able to form their own version of the pantheon of heroes who could be immortalized in the form of monuments.

One gets the impression that we were not celebrating the anniversary of the Czech Republic, but of the Austro-Hungarian monarchy in Vienna.
Further, the author cites as an example the initiative of the authorities of the Prague-1 district to install a monument to Marshal Josef Radetzky in the center of the Czech capital. This man in the XNUMXth century was in the service of the Austro-Hungarian crown, was the Viceroy of Lombardy-Venice. At one time, this monument was already in Prague.

In the Czech Republic, there are disputes over the monument to Radetzky. On the one hand, he was a Czech nobleman, but on the other, which today especially oppresses local nationalists, he had no intention of speaking out for independence and served the Austrian court.

The author also writes about a memorial column in honor of the Archduchess of Austria Maria Theresa, Empress of the Holy Roman Empire.

According to the Czech journalist, after that it will remain "to restore the position of the Prague governor", hinting at the times when governors from Vienna were appointed to rule on the territory of modern Czech Republic.

Instead of a monument to Marshal Konev in Prague-6, there is now an ugly chipboard.
At the same time, the author calls Konev a "Soviet executioner", adding that at the same time, there are many monuments and memorial plaques around the country to "Czech executioners from among the representatives of the Communist Party." In particular, Antonin Zapotocki is mentioned, who headed the Czech government in 1948-1953. According to the author, they decided to remove the monuments to the leaders of the communist regime, but even here they did not go to the end.

Klimesh immediately adds that the previously erected monuments "have the right to remain in their places."

In general, it is worth pondering why the monuments of the past suddenly began to excite us.
The author notes that in the Czech Republic there is no systematic approach in this regard. Klimes believes that a new approach could bring the layers of Czech society together.

Certainly, there is a lack of modern public sacred work that would be much better than a war for old and new columns. We must ask the question to whom in general in the Czech Republic we would like to erect monuments today.
Ctrl Enter
Noticed oshЫbku Highlight text and press. Ctrl + Enter
We are
Reports from the militia of New Russia for 27-28 September 2014 of the yearDecember 2010 years. Russian March. Senseless and merciless? Notes not a Russian person
Military Reviewin Yandex News
Military Reviewin Google News
52 comments
Information
Dear reader, to leave comments on the publication, you must to register.