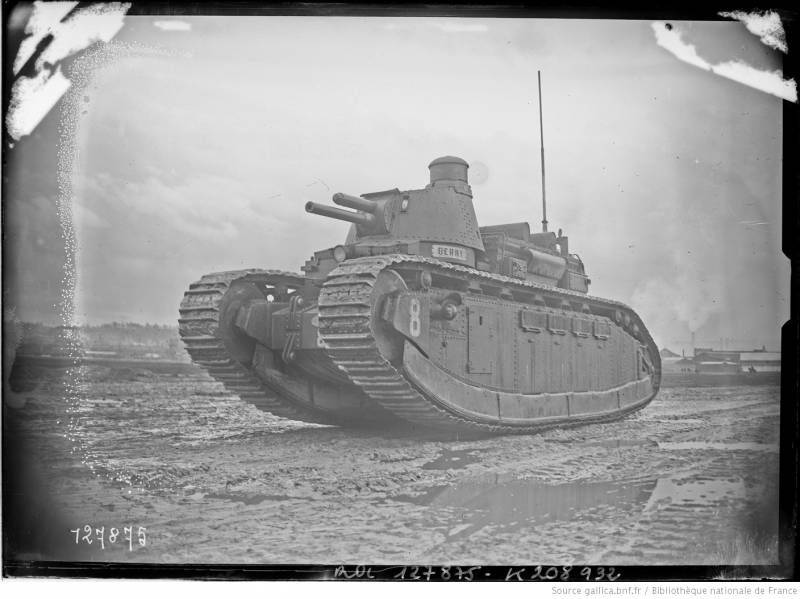 In the interwar period, several countries at once worked out the issue of creating a super-heavy tank... An armored vehicle with powerful protection and heavy weapons could seriously affect the course of the battle and therefore was of interest to the armies. However, almost all of these projects did not progress beyond prototype testing. The exception was France, which was able to put the super-heavy tank into service. However, he did not live up to expectations - like the whole direction.

First of its kind

The first super-heavy tank in France was the Char 2C (also known under the factory designation FCM 2C). It was the first tank in the world with anti-cannon armor, and was also the first to use a three-man turret. The Char 2C still retains its status as the heaviest production tank in French production, and also remains the largest tank in the world to come into service.

Development of the future Char 2C began at the turn of 1916-17. taking into account the operating experience of early tanks. The army needed a heavily armed and well-protected vehicle to break through enemy lines of defense on a typical battlefield of an ongoing war with all its obstacles and threats.

At the beginning of 1917, Forges et Chantiers de la Méditerranée (FCM) presented three projects of heavy tanks with different characteristics and similar weapons. The largest was the FCM 1C - it was a vehicle over 9 m long and weighing 62 tons with a 75 mm cannon in the turret and four machine guns. The thickness of the armor reached 45 mm. 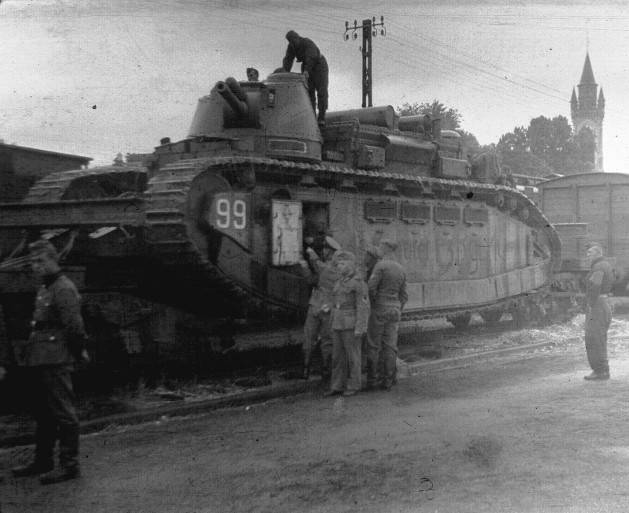 The Germans are examining a captured Char 2C # 99 Champagne tank. It was this vehicle that previously carried the 155mm cannon. Photo Wikimedia Commons
The processes of creating armored vehicles were seriously delayed, and until the end of the First World Army, the desired tanks did not receive. It was only in the spring of 1919 that an order appeared to start production of the modified FCM 1C, which was designated the Char 2C in the army. Until 1921, only 10 tanks were built, and they all served in the same regiment. 8 vehicles became linear, two others - training and command.

Despite its weight, dimensions and operational complexity, the Char 2C was a very successful armored vehicle for its time. Meeting the requirements of the army, it remained in service for a long time. At the same time, attempts were made to improve the design. So, in 1926, one of the tanks received a 155-mm howitzer (later dismantled), and in the late thirties, experiments with overhead armor were conducted.

Char 2C tanks remained in service until 1940, before the German attack. The tanks failed to take part in the hostilities. Due to logistical problems, the 51st Tank Battalion, equipped with the FCM 2C, was unable to reach the front. Nine tanks were destroyed right on the railway, another went to the enemy intact.

Since 1928, the development of new super-heavy tanks began. This time they were considered not as a means of breaking through someone else's defense, but as an addition to their own. This technique was proposed to be used as "mobile forts" to reinforce the stationary structures of the Maginot Line. The first stage of such a program continued until 1932, after which the work was curtailed due to the restrictions provided for by international agreements. 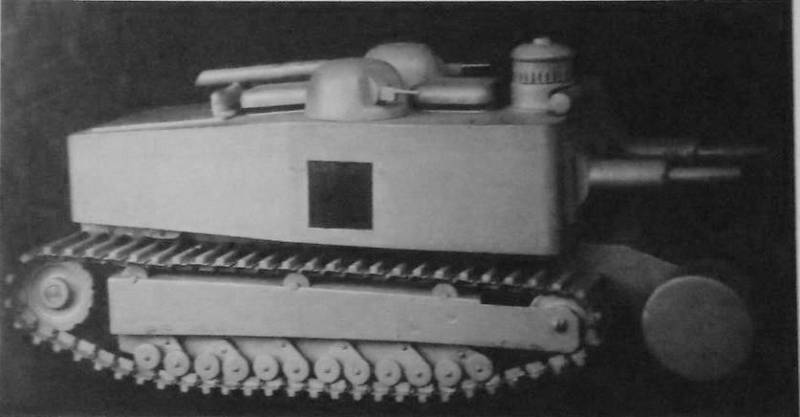 Char BB tank model. Photo Ftr.wot-news.com
The main result of the program is the Char BB project from FCM. It was a 60-ton tank with armor up to 60 mm thick. He received a box-shaped body with a pair of gun mounts in the front plate. The main armament of the tank was seen by two long-barreled 75-mm cannons. A pair of turrets with machine guns were provided on the roof. The crew included eight people. The project did not progress further than making a model.

The topic of "forts" for the Maginot Line returned already in 1936, and this time the work was more solid. It was proposed to create a tank weighing 45 tons, similar in architecture to the serial Char 2C. Due to modern components and strengthening of the booking, it was possible to obtain significant advantages over it. In the future, the concept was refined and developed, which led to very interesting results.

One of the participants in the new program is the Ateliers de construction d'Issy-les-Moulineaux (AMX) bureau. The first version of the "mobile fort", called the Char Lourd ("heavy tank"), was proposed in 1937. In fact, it was an enlarged and reinforced Char 2C tank. The key differences were thicker armor, an increased caliber turret gun, and a cannon in the frontal hull. For a number of reasons, such a project was not approved, and the work continued. 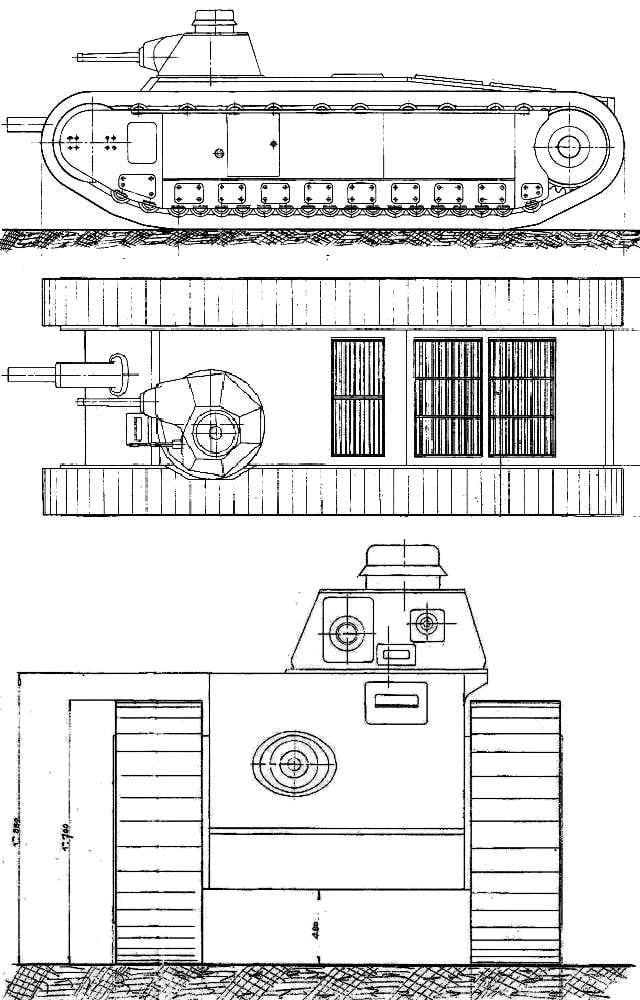 The scheme of the AMX Char Lourd tank mod. 1937 Figure Alternathistory.com
In 1939, AMX designed a tank with the tentative name Tracteur C. The existing concepts were revised and the appearance of the vehicle changed. A 140-ton tank with armor up to 100 mm m thick with two turrets was proposed. The main front was armed with a 105-mm cannon, and a 47-mm one was placed in the stern. There were also four machine guns.

Due to the large mass, it was proposed to equip the tank with several engines of an unknown type with an electric transmission. At the same time, an archaic undercarriage was used with many small road wheels without a suspension. According to calculations, the speed on the highway would not exceed 20 km / h. Crew - 6 people.

In parallel with AMX, the Atelier de Construction de Rueil (ARL) bureau worked on Tracteur C. The first version of his project was presented in 1939, and then a modified version appeared. As the tank developed, it received more powerful armor - and at the same time it became heavier. The first version of the project provided for a combat weight of 120 tons, and later it increased to 145 tons.

The latest version of the AMX Tracteur C. Drawing Wardrawings.be
A vehicle with a long body (approx. 12 m) and a turret in the bow was again proposed. Armament included 90 and 47 mm cannons, as well as several machine guns. The thickness of the frontal armor reached 120 mm and guaranteed protection against all existing tank and anti-tank guns. Due to two 550 hp engines. managed to get the design speed at 25 km / h. Crew - 8 people.

In April 1940 ARL presented a mockup of its tank to the customer. It was compared to a competing project from FCM and was considered insufficiently successful. ARL's Tracteur C project was closed following the AMX development of the same name.

Together with other organizations, the "mobile fort" was developed by the FCM enterprise; his project bore the designation F1. By the spring of 1940, the shape of a 139-ton tank with powerful anti-cannon armor and two turrets with weapons for different purposes.

Once again, it was proposed to build a super-heavy tank on a long chassis. The frontal armor was 120 mm thick, the sides were 100 mm thick. Unlike other models, the FCM F1 received a spring suspension on the road wheels. The main turret with a 90- or 105-mm cannon was placed in the stern, in the bow there was an additional turret with a 47-mm gun. The crew included nine tankers. 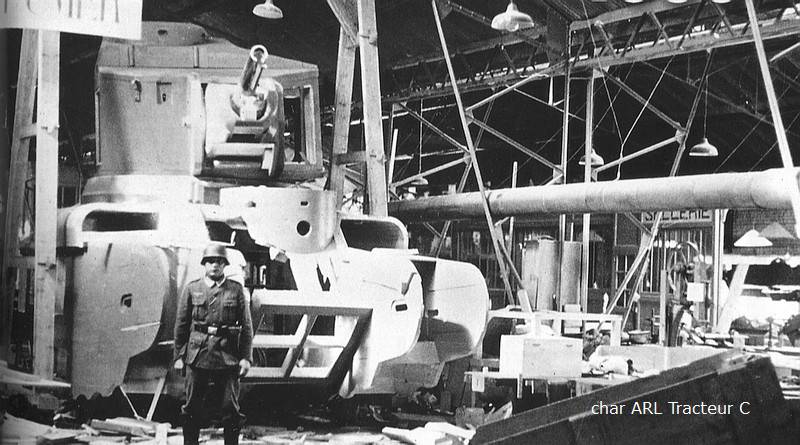 Tracteur C model from ARL factory. German soldier allows you to estimate the size of the product. Photo Chars-francais.net
In the spring of 1940, according to the F1 project, a wooden model was built for demonstration to the military. The FCM tank had a number of important advantages over the ARL development and was of greater interest to the army. Its development was supposed to continue, but these plans were not implemented in time.

On June 10, 1940, Hitler's Germany launched an offensive against France. All the forces of the French tank building were thrown into increasing the rate of production of serial equipment. The continued development of new samples, let alone the launch of the series, proved impossible. The army had to fight in cash armored vehicles - not always meeting current requirements.

The battles were soon over, and German specialists gained access to the French super-heavy tanks. They were able to examine crashed Char 2Cs as well as trophy dummies from ARL and FCM. None of these samples interested the German army - its plans at that time did not provide for the construction of super-heavy equipment. 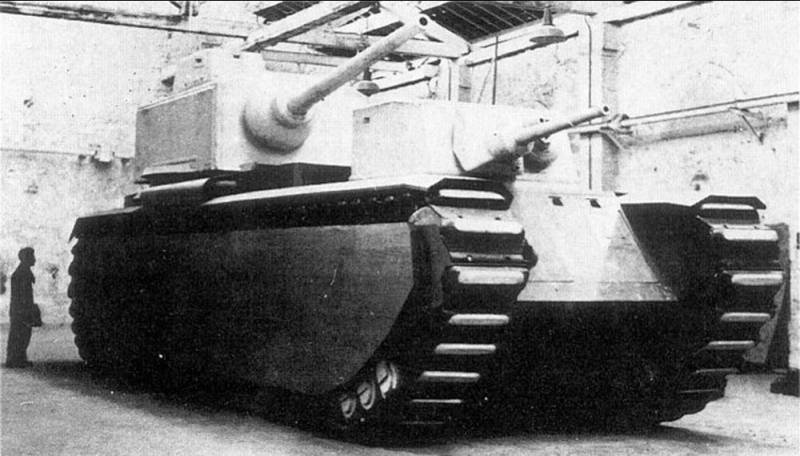 FCM F1 tank model. Photo Militaryfactory.com
In this история French super-heavy tank building is over. Only one sample was delivered to the series, but it did not become mass. After a long development, several more projects stopped at the stage of demonstrating layouts. Thus, France spent a lot of time and resources, but got no real benefit.

Several main reasons led to the unsatisfactory results of the superheavy direction. First of all, these are the limited economic and technological capabilities of France. The army could not order the desired number of tanks, and the industry until the end of the interwar period experienced difficulties in increasing the rate of production, which made it unable to fulfill orders on time.

Another problem was the lack of a competent policy for the development of armored forces. In the twenties and thirties, there were disputes in the highest circles of the French command, often leading to ambiguous results.

So, a direct consequence of this can be considered the fact that almost all of the French tanks built were based on the Renault FT design - with all its limitations. The latter manifested themselves especially clearly in the creation of super-heavy tanks. Fundamentally new ideas were not actively implemented or were absent altogether.

With all this, it should be borne in mind that the very idea of ​​a super-heavy tank at that time was dubious and did not have clear prospects. As it became clear during the Second World War, such a technique in terms of the totality of characteristics and qualities turned out to be unnecessary for a modern and developed army. Thus, the French army wasted time and resources on questionable projects - instead of programs with real benefits.