Who will win the "war" for water in Crimea: life without Dnieper water 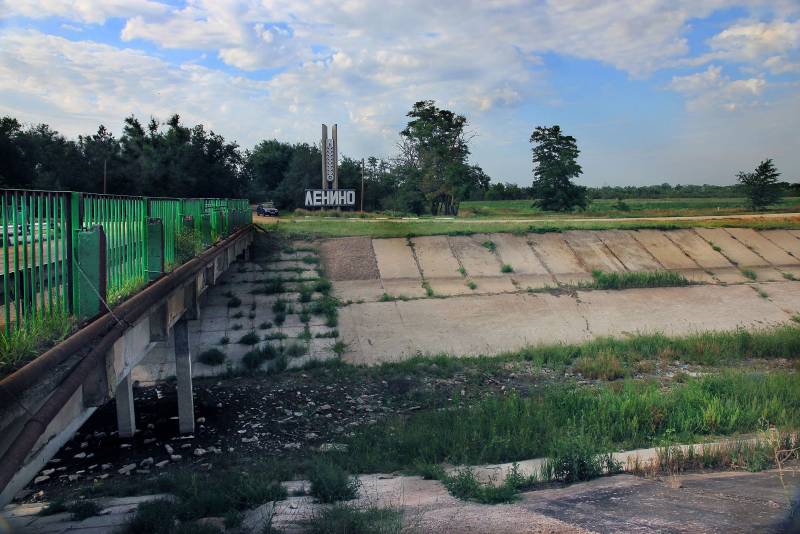 Very often, topics for publications appear from conversations, disputes, some opinions that quite often arise in the process of communicating with readers. Fortunately, modern means of communication allow us to conduct discussions not only with supporters, but also with opponents. This article was the result of several such disputes on the eve of the Day of the Russian Navy. The subject of the dispute: the impending "war" between Ukraine and Russia for water in the Crimean Canal.


It is clear that for most readers this question seems to be closed. Numerous statements by the political and military leadership of Russia give a clear understanding that at the present time the issue of water on the peninsula does not arise. Consequently, Russia does not intend to fight with Ukraine. This is the opinion of the majority of Russians.

Ukrainians, on the contrary, are confident that Crimea is dying without water, and the accelerated development of Crimean resorts, the restoration of Crimean enterprises, and the agriculture of the peninsula will require more and more industrial water. Indeed, in Soviet times, it was the canal that provided the Crimea with water by 84%. This means that with the pace of development that Crimea demonstrates, the war for water is a matter of time.

Whose point of view is correct

At first glance, both points of view are quite realistic. Moreover, based on past experience, the Ukrainian point of view even has some priority. There is even evidence of this point. I'm talking about an accident at one of the factories of the peninsula, which occurred precisely because of the lack of water. In theory, such accidents should be repeated in the future.

And the agriculture of the Crimea has changed, in the opinion of the Ukrainians, not for the better. The lack of water forced the farmers to change production radically. Now in Crimea, crops are grown that do not require a lot of water. Cultures traditional for Soviet times are a thing of the past. What's next? Further, according to the Ukrainians, Crimea should generally lose its fertile soil layer. It will turn to dust and just be blown away by the winds.

Another argument of supporters of the death of non-Ukrainian Crimea looks somewhat ridiculous. Remember, "we will wait until Russia collapses and simply take the territory with the help of the army"? We will not talk about the collapse of Russia today. But you can talk about the "Armed Forces in Crimea". Already today, the peninsula has on its territory a military grouping, which surpasses in its power the armies of most European states. Moreover, for all components.

And what about us? Let's start with industry. President Putin recently attended the laying of two large ships. Russia has revived the shipbuilding of the Crimea. Such production requires, among other things, a fairly large amount of industrial water. Agree, it is doubtful that the authorities of Russia and Crimea took a risk and limited the supply of drinking water to the resorts.

In terms of comfort, the modern Russian tourist is not much different from tourists from other countries. The "chicken coops" of Soviet times are a thing of the past. And they will never return. Russians, for the same money that they leave in Crimea, can quite safely rest in other countries. "Greenhouse conditions", which were in Soviet times, are no longer there. For a tourist you have to fight with competitors.

So what happened in the Crimean industry? An ordinary technical revolution. Old Soviet technologies were replaced with modern ones. No fanfare, no noisy festivities, no loud statements at a high level. We just created a new production. And this process, in my opinion, will continue in this direction.

Agriculture. Indeed, the range of products manufactured in Crimea has changed. The transfer of production was painful for the peasants for some time. But what is happening today? It is not yet possible to say that Crimeans ride like cheese in butter. Difficult, difficult, but already profitable. Perhaps this is how you can describe peasant labor on the peninsula.

The war for water is already underway

Yes, the war is already underway. And it began with the "victory of Ukraine" in 2014. From the closing of the locks of the Crimean Canal. Only the war is going on not only on the peninsula, but also on the territory of Ukraine. The Kherson region has already turned into an abnormal area for agriculture. And the place where the Dnieper water was discharged from the canal in the Karkinitsky Bay into the zone of ecological disaster. This has become a significant "addition" to the uncontrolled waste disposal of Ukrainian enterprises.

Alas, it is simply impossible to restore the ecosystem of the bay. Desalination and other negative phenomena in this bay have already led to a sharp decrease in the number of marine life in this part of the Black Sea. Fishermen have always worked in the bay. Even with a predatory attitude towards the marine fauna, the number of mullet, flounder, goby practically did not change. Today even the goby leaves these places. It's a shame to mention the famous Black Sea herbal shrimp.

Moreover, river water washes away the territory of Ukraine. I have no data for 2020, but for 2019, more than 15 hectares of land were simply "washed away" from the coast, that is, under water! They try not to speak openly about this, but this is the data of Ukrainian scientists!

For some reason, we always talk only about the positive aspects of our projects. They drained the swamp. It's so good that you can now plant potatoes in its place! And the fact that the nearby rivers for some reason dried up, we do not notice. They watered the desert. Now there will be melons for watermelons and melons. And the fact that animals have disappeared somewhere does not interest us.

Ukrainians are beginning to realize that deforestation in the Carpathians has led to climate change. This comes through death, through the loss of villages, destruction of roads, destruction of infrastructure. But for some reason it doesn't reach other places. The Black Sea "blooms" along the coast no worse than a rural fire pond. So what? Everything is good.

Has the climate changed in the Kherson region? Yes, everything is fine. Global warming or cooling. Your choice. For some reason, natural disasters began to occur regularly in the country, which had never been heard of before? Nature! Nobody knows what she will throw out the next moment.

So is this war or not? But who is fighting whom and why?

The instability of the political situation in Ukraine, the search for "one's own path" of development, disorder in society, and, to be honest, the absence of this very society leads the country to destruction. In such a situation, there is no time to think about any environmental problems. Think about climate change too. The main thing is to win! It doesn't even matter who to defeat.

The situation can change only when Ukraine finally decides what it is. Whose ally is she and how is she going to live on. All these slogans, which are ultimately just variations on the theme "for all good, against all bad", lead nowhere. More precisely, they only aggravate the country's situation. Lead to the loss of population, economic and military potential, to the loss of territories in the long run.

Today, almost everyone is sure that the water will return to the Crimean Canal. When will this happen and whose Crimea will be? Russians and Ukrainians have different opinions on this issue. Only now we completely forget about nature. About its capabilities and ability to adapt.

Crimea will soon completely solve the problem of water. How this happens is not important. The ecological system of the peninsula will adapt to the changed conditions. Naturally, there will be some climate change in Crimea. And Crimeans will learn to live without any discomfort in conditions of limited water consumption.

Then another question arises. Will the Dnieper water be needed on the peninsula? Is it really necessary to change everything again? The question has not been answered yet ...

Ctrl Enter
Noticed oshЫbku Highlight text and press. Ctrl + Enter
We are
A great interview with Sergey Lavrov: about Ukraine, Obama and IranWhat you didn't want to know about England
Military Reviewin Yandex News
Military Reviewin Google News
160 comments
Information
Dear reader, to leave comments on the publication, you must to register.