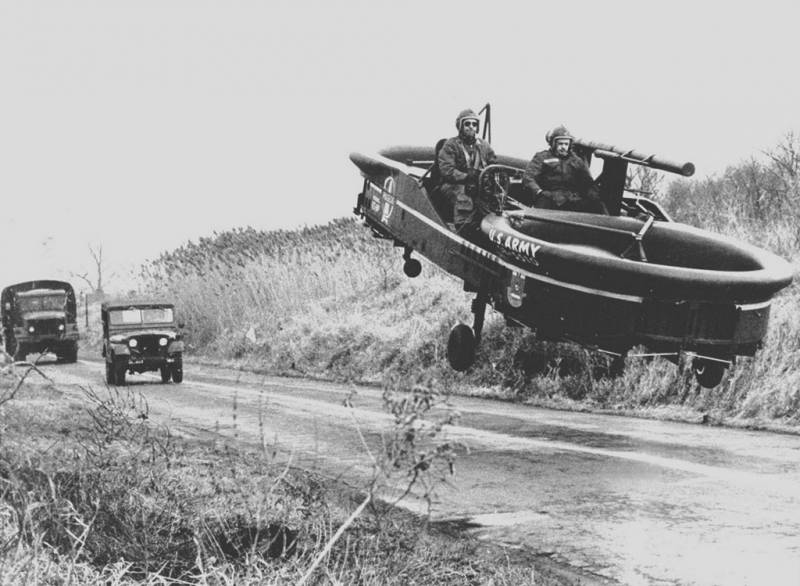 In 1957, the US Army Transportation Research Command issued an assignment to industry to develop a flying jeep. Only a few years remained before the mass use of helicopters in combat conditions. The Vietnam War clearly confirmed the high efficiency of such equipment for solving various tasks on the battlefield. In this regard, an order for the development of a military flying jeep looks strange. But in the late 1950s, the American military believed that such a vehicle would be more affordable and smaller than a helicopter, which would allow the production of flying jeeps in large quantities, and their use would be justified.

How the idea of ​​a flying jeep appeared in the USA

The very idea of ​​creating a flying jeep settled in the heads of the American military command during the Second World War. Attempts to create the first flying machines ended in failure, but they were regularly undertaken. True, until 1958, none of the prototypes could take off. Another driver of a rather unusual program is the fact that the Americans were afraid that the first flying car would appear in the USSR. Not a moon race, of course, but also a kind of competition.

The start of the new program, which received the official name "Flying Jeeps", that is "Flying Jeeps", was announced in 1957. Design contracts and terms of reference were awarded to Curtiss-Wright, Chrysler and Piasecki Aircraft. Unlike some modern flying car concepts that continue to appear from time to time around the world, the US military was planning a vertical takeoff and landing aircraft. This made a flying jeep akin to helicopters, and also gave an advantage to use even from small unprepared sites in areas that are difficult to access for other equipment. An important advantage of this vehicle was the ability to efficiently transport goods and conduct reconnaissance in off-road conditions.

Piasecki Aircraft, founded in 1936 and specializing in the creation of helicopters, was initially involved in the development of a new aircraft for the US military. The company still exists today as a subsidiary of the Boeing Corporation and continues to work with the Pentagon. The company was founded by Frank Nicholas Piasecki, a native of Poland. This American aircraft designer of Polish origin was one of the pioneers in the field of longitudinal helicopter design. He created his first PV-2 helicopter already in 1943. At the same time, the novelty made an impression on the military, primarily interested in the representatives of the US Navy. Later, the same designer participated in the creation of such legendary helicopters as the CH-46 Sea Knight and CH-47 Chinook. 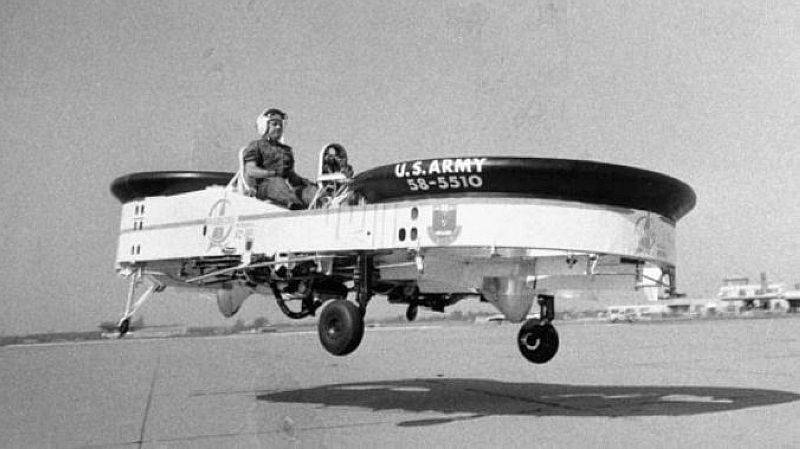 Already in the 1950s, Piasecki Aircraft had a wealth of experience in creating various rotorcraft, and its founder proved to be a prominent designer who, along with Sikorsky, did a lot to establish the American helicopter industry. It was Pyasetsky's company that had to solve the problem of providing the American military with an unusual flying jeep. The new vehicle, which could also carry some weapons systems, today seems to be a very unusual project, especially with an eye to the 1950s. But then the military and developers believed that the new aircraft with vertical takeoff and landing would be lighter and cheaper than a helicopter, while retaining the main advantages of rotary-wing vehicles. At the same time, the device will be very useful for transporting various goods and conducting reconnaissance.

Piasecki Aircraft has achieved the greatest success among all the American companies that have worked on the creation of a flying jeep. Within the framework of the program, the engineers of this company prepared two vertical take-off and landing aircraft, which were modernized several times and underwent full tests. The first of the Piasecki Aircraft aerojips took off for the first time on September 22, 1958, and in October began full-fledged army tests.

Initially, the new development was called Model 59K Skycar, but rather quickly the company changed its name to Airgeep. Army designation - VZ-8P. Externally, the novelty was similar to the model presented by Chrysler: the Chrysler VZ-6. The resulting flying jeep had an easily recognizable rectangular body with characteristic curves in the bow and stern. In these curves, the designers placed tunnel three-bladed propellers with a diameter of 2,26 meters each. At the same time, the total length of the VZ-8P Airgeep model was 7,95 meters, width - 2,87 meters, height - 2,1 meters. The car could remain in the air even after the failure of one of the engines. At the same time, the maximum take-off weight of the vehicle reached 1065 kg.

The aircraft was designed for two people, while the control of the machine was helicopter. This was supposed to facilitate the process of training pilots. Any helicopter pilot could easily master the control of the novelty. The two propellers of the flying jeep were originally powered by a pair of 360 hp Lycoming O-2-A180A four-cylinder engines. every. This was enough for the aircraft, inferior in size to classical helicopters, to confidently fly at low altitudes at speeds up to 110 km / h. 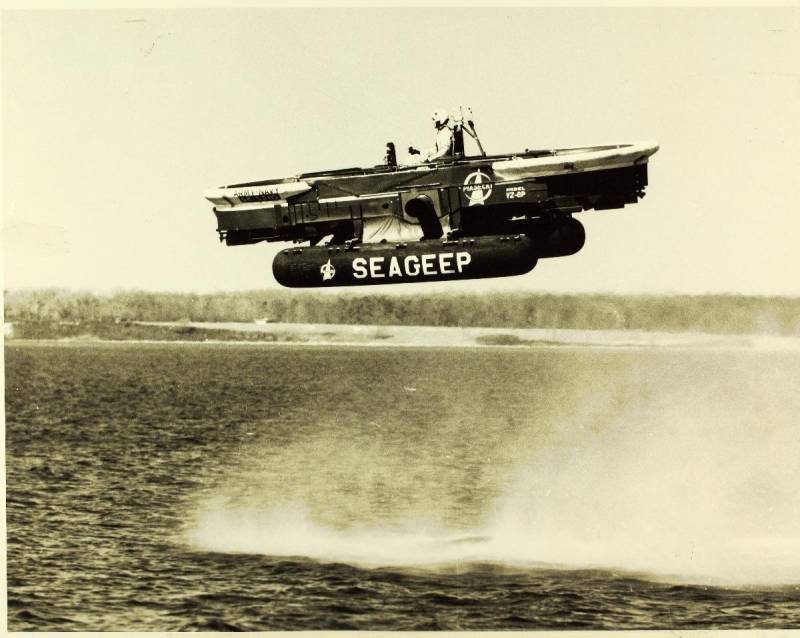 At the same time, when the apparatus was handed over to the military in the summer of 1959, the power plant was replaced with a more powerful one. Two piston engines gave way to the Turbomeca Artouste turboshaft engine producing 425 hp. With this engine, the car was tested on navy... Especially for the Navy, the tricycle chassis was replaced with a float one. After the return of the flying sample from the fleet, the army leadership again initiated an engine replacement. This gave the Airgeep an even more powerful yet lightweight engine: the Garrett AiResearch TPE331-6 with 550 hp. The device, which was originally planned to be used at altitudes from 1,5 to 4 meters, could easily rise and higher, hundreds of meters above the earth's surface, quietly flying around almost all obstacles. The ceiling was about 900 meters high.

In parallel, the US military considered the novelty as a carrier of light weapons systems. They even wanted to install a recoilless gun on a flying jeep. It was planned that the nimble aircraft would be able to jump out from behind cover and attack an armored target after landing. However, the vehicle had no reservation, so the crew had clearly little time to aim. In this case, the verdict for a relatively large aircraft could be ordinary fire from small arms weapons, not necessarily even from anti-aircraft machine guns that were installed on tanks.

The fate of the Airgeep project

Over time, Piasecki Aircraft stopped trying to improve the first prototype by simply busting the engines and introduced a second model of the aircraft. The model, which also took into account all the wishes of the American military, received the designation AirGeep II, or, in the military classification, - VZ-8P (B) "Airgeep II". The novelty received an even more powerful power plant: two turboshaft engines Turbomeca Artouste IIC with a capacity of 550 hp. every. At the same time, the maximum flight speed increased to 136 km / h, which was a good indicator, given that the maximum take-off weight of the flying jeep exceeded two tons: 2177 kg. A distinctive feature of the model is the ejection seat for the crew and the ability to carry up to three paratroopers or equivalent cargo. The tricycle chassis provided the vehicle with the necessary mobility on land, but only on paved roads. 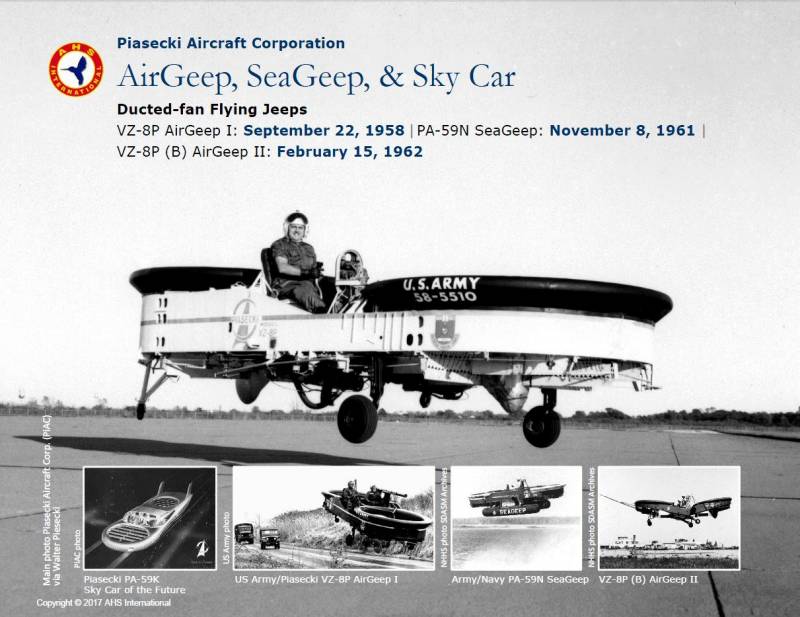 The first flight of the updated model took place on February 15, 1962. At the same time, all the positive qualities of the already created and tested specimens were taken into account, and the controllability and stabilization in flight were improved. Despite the work done and quite active tests in the army and navy, the vehicle was not in demand. At the same time, all Airgeep models had their obvious advantages. These included excellent visibility, the ability to take off and land from almost any unprepared site. Separately, it was noted that low flight altitude helps to avoid enemy radars. However, it all came down to the actual use of such equipment in combat conditions. The tests carried out clearly demonstrated that the concept of "flying jeeps" is not suitable for modern combat. Therefore, the program was closed in the same 1962 year, fully focusing on the development of combat helicopters for various purposes.