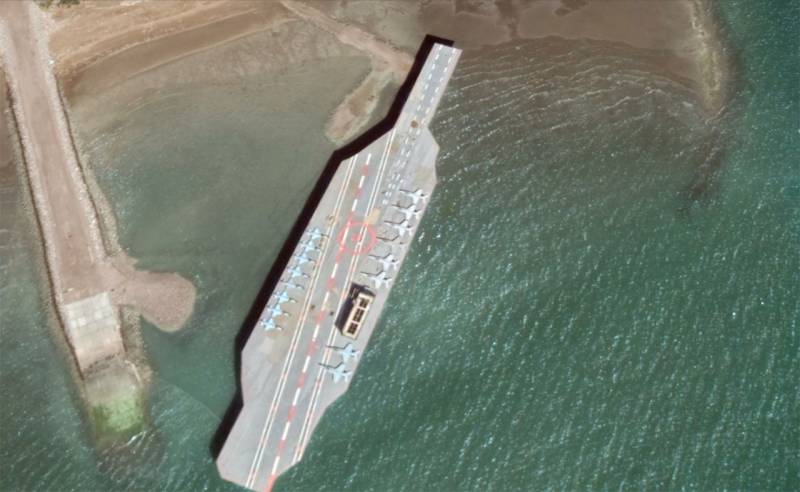 Previously, Iran had already conducted exercises of this kind. So, about five years ago, Iranian troops destroyed a previously created model of an aircraft carrier of the US Navy using missiles and artillery installations. During combat training maneuvers, the Iranians used the so-called mosquito tactics fleet, attacking the "aircraft carrier" with several high-speed boats.

According to US media estimates, based on data from satellites, the copy of the aircraft carrier, created by Iran, has the following dimensions: about 200 meters long and 45-50 meters wide.

The model aircraft carrier was towed to the area of ​​the Strait of Hormuz, a strategic waterway through which a large traffic of oil products is carried out. Initially, the model of the ship was located in the area of ​​the port of Bandar Abbas.

On board the imitation of the Nimitz-class aircraft carrier, the Iranians placed 16 copies of carrier-based fighters, some of which are similar to the F / A-18.

The United States of America reacted by calling the Iranian actions "blatant provocation." The American press adds that the preparation of the imitation of the US Navy aircraft carrier Iran "represents as a signal to Washington."

Ctrl Enter
Noticed oshЫbku Highlight text and press. Ctrl + Enter
We are
Joint exercises of the ships of the Navy of Iran and Pakistan in the Strait of Hormuz"Varyag" in China. View from Ukraine
46 comments
Information
Dear reader, to leave comments on the publication, you must to register.