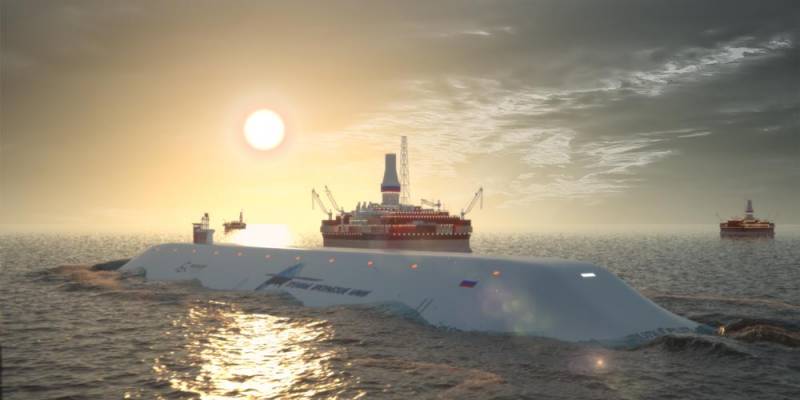 With all the skepticism about the creativity of domestic design bureaus, it must be admitted that sometimes they have original ideas. Skepticism largely stems from the fact that often old Soviet developments taken from voluminous safes painted with red lead are given as innovations. But not at this time.

In July 2019, the Malakhit St. Petersburg Maritime Bureau of Mechanical Engineering developed a nuclear-powered underwater gas carrier for the export of liquefied natural gas (LNG) from fields in the Arctic. Then they wrote about it and even tried to discuss the prospects for an underwater tanker fleet (the idea is also not new, but was put forward in Soviet times). Dmitry Sidorenkov, Head of the Advanced Design Sector at Malachite, told us something about this project. The boat is 360 meters long, 70 meters wide, 30 meters high, and has a draft of 12-13 meters. Capacity 170-180 thousand cubic meters of LNG. Underwater speed - 17 knots. 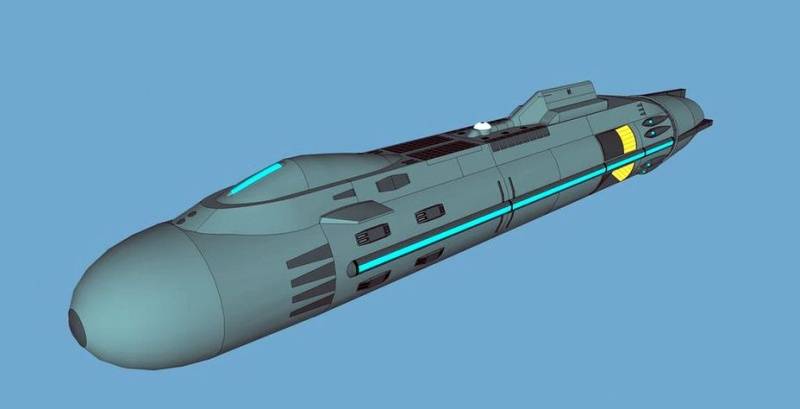 However, there was an interesting nuance in this case, which was then paid little attention. The company report said about this project:

In support of negotiations with a potential foreign customer, the company carried out studies on the creation of an underwater nuclear gas carrier for the submerged transportation of liquefied natural gas from northern fields to the east.
And this is interesting. This circumstance - a foreign customer and LNG transportation in the eastern direction, translates the whole topic into a military-economic plane.

We could not have been shy. There are not so many foreign customers who are potentially interested in a nuclear-powered underwater gas carrier, transporting LNG from the Arctic to the east, as well as being able to pay for such an order: a dozen companies or so. They are backed by the Central Military Council of the PRC and the Military Council of the Central Committee of the CPC.

This topic has its own important circumstances, which allow us to confidently assert that it is precisely China's strategic interests that are at stake and that a potential order for nuclear-powered underwater gas carriers comes from the highest military authorities of the PRC.

Long-term contracts prevail in LNG supplies. For example, South Korea has supply contracts that run until 2030. Under these contracts, a fleet of gas carriers is being built, ports are being equipped, gas liquefaction units are being built at the ports of dispatch and regasification units at the ports of destination. Within the framework of the existing structure of the LNG market in this region, there is no particular need to communicate with nuclear powered underwater gas carriers (this is a new, untested, rather risky method of delivery). Even Russian LNG from Sakhalin, which is closer to the Arctic and is exported by conventional surface gas carriers, in which there are Japanese shareholders, the countries of the region are not quite willing to take, and in 2019 shipments from Sakhalin decreased by 11,1 million tons of LNG, or 16% (by 2018). The Arctic, undeveloped fields, underwater gas carriers are something of a fantasy.

There are ports in Russia where nuclear-powered icebreakers and the nuclear-powered lighter carrier Sevmorput can enter. There are 19 ports in total. For each of them, permission to enter such vessels was issued by a decree of the government of the Russian Federation. But this does not mean that a ship with a nuclear power plant can enter such a permitted port just like that. For example, in 2019, Sevmorput called twice at the Big Port of St. Petersburg. For the first time with refrigerated fish containers from Petropavlovsk-Kamchatsky. He was met by the vice-governor of St. Petersburg, Eduard Batalov, and a special commission was formed to check the port. You never know what? Suddenly something radioactive will flow from it ... The second time the lighter carrier entered to replace the propellers, and the captain of the St. Petersburg Seaport, Alexander Volkov, issued a special order defining the list of berths for an atomic lighter carrier. And in general, according to the General Rules for Navigation and Anchorage of Vessels in the Seaports of the Russian Federation, the captain of a ship with a nuclear power plant must notify Rosgvardia and the ship in the port must be protected by Rosgvardia units. Fuss with them a lot.

And here - a ship with a nuclear power plant, and also an underwater one. Any call to a foreign port for unloading will inevitably be associated with complex procedures, correspondence and bureaucracy. All these problems can be solved, but why? There are, after all, ordinary gas carriers that can enter ports with their own precautions, but without such difficulties. 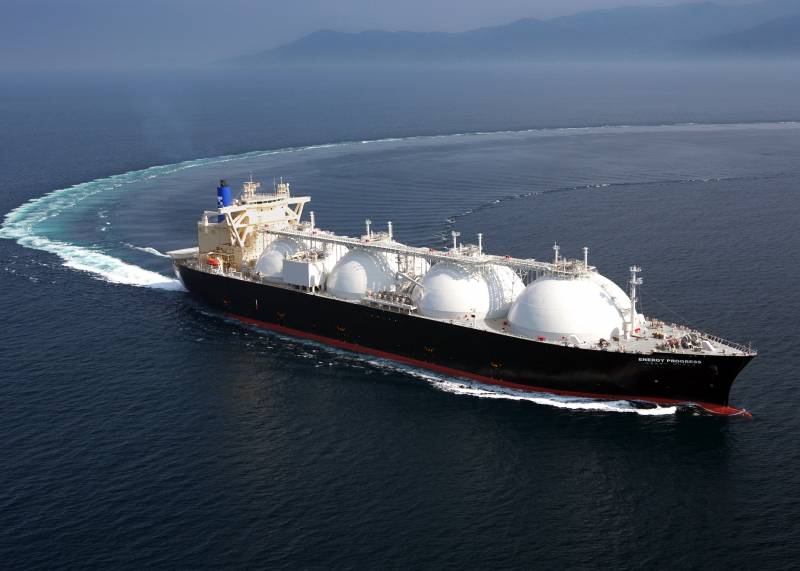 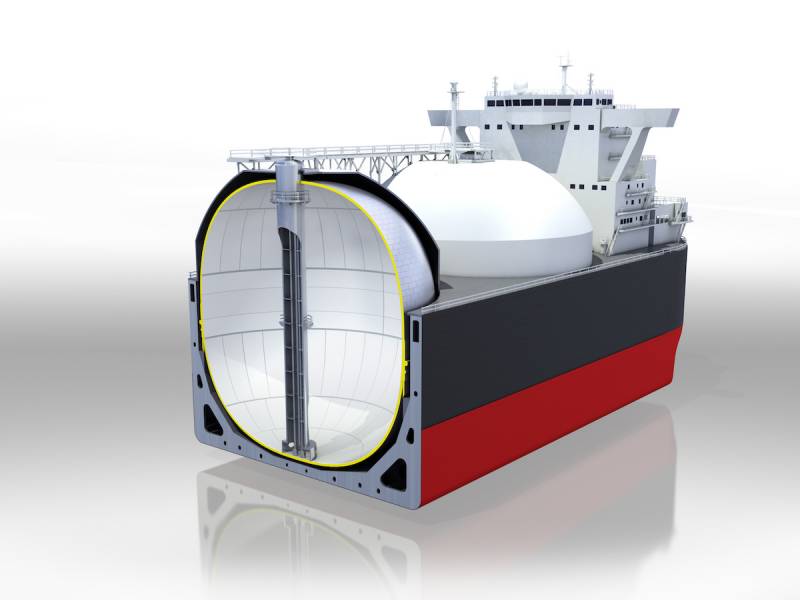 Устройство tank for liquefied gas in section
Therefore, any foreign customer of a nuclear-powered underwater gas carrier can decide to operate such a vessel or vessels only if he needs gas desperately, delivery by conventional means is impossible and there is a fundamental willingness to solve all emerging problems at the level of top government officials. Neither Japan nor South Korea needs this. Only China remains.

Yes, I heard that Malachite allegedly collaborated with the South Koreans. However, firstly, South Koreans often start projects, from which nothing comes of it later (I even participated in one of these myself), and, secondly, South Korea does not need such a ship at the level of business and government.

Under the conditions of a naval blockade, a nuclear-powered underwater gas carrier becomes very valuable due to the fact that it can not only pass under the ice of the Arctic, but in general all the way to China can be done underwater. That is, covertly, with a minimal risk of the vessel being detected by the hostile party. Actually, you need to go through the Arctic, go through the Bering Strait to the Pacific Ocean, bypass Japan and enter the East China Sea through the Miyagi Strait. Passage through the Miyagi Strait and following in the East China Sea can be provided by the underwater export of the Chinese Navy.

With regard to submarines, the prospect of underwater loading has been much discussed. Technically, it is quite possible both from the drilling platform and from the subsea gas production complex. If it is possible to load an underwater tanker under water, it is also possible to load it under water and to unload it by equipping it with a special underwater port with the necessary devices. Thus, a nuclear powered underwater gas carrier can not only covertly approach, but also covertly unload. This circumstance is extremely important from a military-economic point of view for breaking the naval blockade of China.

How many such boats do you need?

From the Arctic (from Sabetta) to China (Shanghai), the route is 5600 nautical miles. At 17 underwater nodes, the nuclear-powered underwater gas carrier will cover this distance in 330 running hours, or 14 days. Thus, one ship can have one voyage to and from China per month. China's monthly demand for LNG is 7,5 million tons. Thus, to cover the current consumption of China in LNG, bringing it from the Arctic under water, 98 nuclear powered underwater gas carriers will be required.

The requirements of war or blockade times are significantly reduced in comparison with peacetime. We hardly have the opportunity to estimate how much China will consume LNG during the blockade at the most necessary minimum. But we can roughly estimate. If the needs of the blockade time will be approximately 25% of the peacetime, or 22,5 million tons per year - 1,8 million tons per month, then 24 nuclear underwater gas carriers will be required for delivery.

Compared to a military nuclear submarine, a nuclear submarine gas carrier is much simpler in design and equipment; it does not require torpedoes and missiles along with the equipment serving them. The crew is greatly reduced in comparison with the crew of a military nuclear submarine and will fit in a compact manned compartment. Therefore, the construction of nuclear-powered underwater gas carriers can proceed significantly faster than military nuclear submarines. With Chinese money and Chinese technical assistance, building 24 such boats looks like a technically feasible task at first approximation. In addition, China with its shipbuilding capacities, having taken a ready-made project, can rivet them in the required quantity itself. By the way, Malachite assumes that 5-8 such underwater gas tankers will be built for the Russian Arctic alone.

Yes, that would be an extremely unpleasant surprise for the United States and its allies. Such a vessel makes the naval blockade much less effective than expected. It is one thing to deploy surface gas carriers, threatening to shoot them with anti-ship missiles, and quite another thing to chase submarines at sea, manned by crews with experience in the submarine fleet and experience in breaking through the enemy's anti-submarine defense.

It is possible, after all, to build an oil-loading modification on the basis of a gas carrier project. The 180 thousand cubic meter tank can hold about 150 thousand tons of light oil.

Scheme of tanks of the project 927 nuclear submarine tanker, the design of which was started in 1973, but then discontinued
It can also be underwater transport. The hold volume of 180 thousand cubic meters is the equivalent of a very large cargo ship. For example, the previously considered Sunrise Ace and Carnation Ace car carriers had approximately the same cargo volume. The nuclear submarine can be redesigned from a gas carrier into a dry cargo ship capable of transporting, say, equipment, ammunition, fuel, in other words, it will open up the possibility of covert delivery of supplies to troops on a bridgehead somewhere far over the sea. It will be much more difficult for the enemy to find and sink it than a surface transport.