August 6 2012
10
The name of General Rajewski has been heard by anyone who has ever encountered history World War 1812 of the year. Napoleon himself noted the military art and the unbending will of Nikolai Nikolayevich, saying about him: "This Russian general is made of the material from which the marshal is made."


Rajewski comes from a noble family with Polish roots, who entered the service of the Russian sovereigns under Vasily III.

He was born in 1771 year and received an excellent home education. At the age of 3, he was enrolled in the Preobrazhensky regiment, and began his service at the age of 14 in the rank of ensign, in the army of his great-uncle, the Most High Prince Grigory Potemkin.

By the 16 years, 1787, volunteered for the army and was assigned to the Cossack detachment Orlov, with instructions from Potemkin "to use the service as a simple Cossack, and then by rank of lieutenant guard." For a young officer, service alongside the Cossacks became an excellent school. In addition to the vast experience of action in the composition of light cavalry, Rajewski learned along with the lower ranks to endure the soldier’s life. The first years of service, laid in Raevsky so deep understanding of ordinary soldiers, which much later will allow to inspire soldiers to feats at critical moments of battle, breaking his tide in their favor. 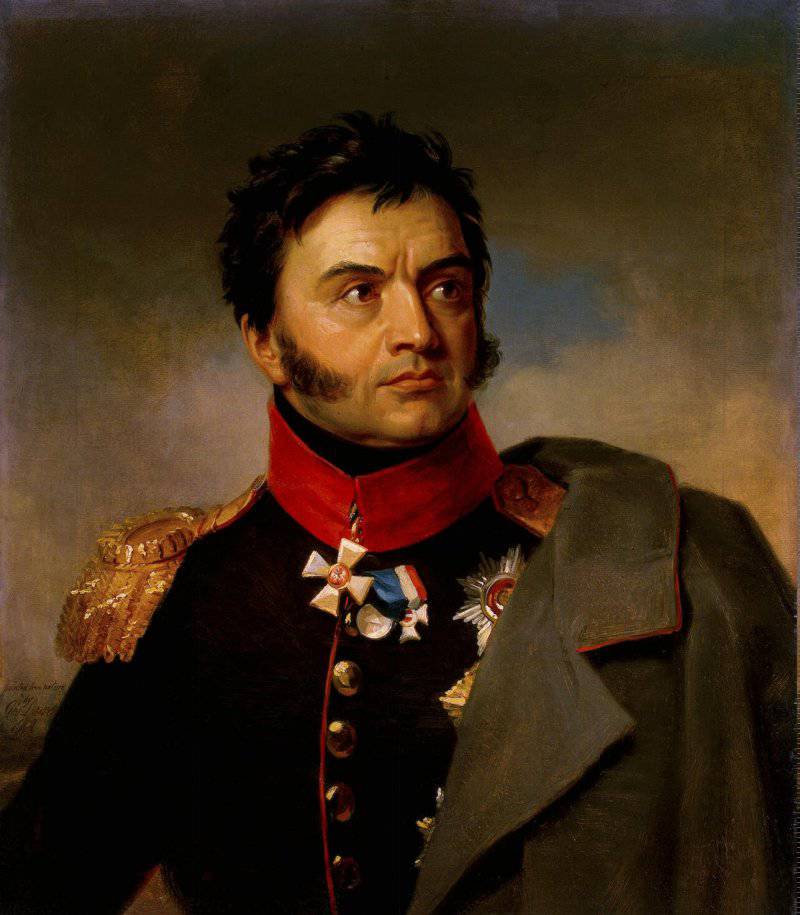 Fighting against the Turks, Rajewski participated in campaigns in Moldova, battles near the Larga and Cahul rivers, and in the sieges of the Bender and Akkerman fortresses. Potemkin’s success of his great-bred thoroughbred did not leave unattended and entrusted to him the command of the Cossack regiment of the Great Hetman. The Turkish war brought Nikolai Nikolayevich the rank of lieutenant colonel.

One year after the end of the Russian-Turkish war, for participation in the Polish campaign, he received the rank of colonel.

In 1794, Raevsky was sent to the Caucasus, to command the Nizhny Novgorod Dragoon Regiment. The regiment was stationed in Georgievsk. At that time there was no active hostilities, and Nikolai Nikolayevich takes a vacation and departs for the capital for the upcoming marriage.

In the summer of 1795, together with his wife Sophia Alekseevna, returns to Georgievsk. Less than a year after arriving at the Raevsky fortress, as part of the Zubov's corps, he marches on Derbent. The regiment of Nikolai Nikolayevich protects communications, conducts reconnaissance and security of carts. The 23 summer commander copes well with the tasks assigned to him, managing to maintain the discipline and combat capability of the detachment during a long and exhausting march. With the main forces reached the Kura River.

With the death of Catherine, the foreign policy of the Russian Empire abruptly changed. The 30-thousandth corps of Zubov, ready for a campaign deep into Iran, was recalled.

Rajewski, like many generals of the Catherine epoch, was dismissed. Paul was extremely hostile to his relationship with Potemkin, seeing in the prince the closest devotee of his very unloved mother.

Until 1801, Nikolai Nikolayevich Rajewski lives in his estates, combining the affairs of their arrangement with the reading of military literature and analysis of past wars.

With the accession of Alexander I enters the service and receives the rank of major general, but only six months later returns to peaceful life in the family circle.

In February 1807, Rajevsky again goes to the army and participates in the wars of the Fourth Coalition.

He is determined to command the Jaeger brigade, covering the corps of Bagration - a close friend of Nikolai Nikolayevich. This summer, Rajevsky visited all the major battles from Amstetten to Friedland. For the campaign 1807 year was submitted to the orders of St.. Vladimir 3 degree and of St. Anna 1 degree.

The world of Tilsit liberated the troops of the Russian Empire for solving other strategic tasks.

In 1808-1809, the war with Sweden, in which General Rajewski fights in Finland: in Kumo and in the battles for Vaasa, Kristinestad, Normark, Bjorneborg. Produced to lieutenant general.

1810 year brought another war with the Turks. Nikolai Nikolayevich was seconded to the Danube Army N.M. Kamensky. Here Rajewski distinguished himself at the siege of Silistra. His detachment under the cover of darkness managed to pull up the siege weapons for a short distance, from which the fortress was perfectly sweeping. The next morning a powerful artillery preparation was undertaken on the positions of the Turks. The fortress, as a result, surrendered during the week. For carrying out this dangerous operation, Nikolai Nikolayevich was awarded a gold sword with diamonds and the inscription “For Bravery”.

Passing through the Neman, Napoleon planned to prevent the unification of the Russian armies and smash them one by one. To prevent the unification should have been 50-thousandth corps of Marshal Davout. Almost a month later, the stubborn rearguard battles Davout managed to reach the city of Mogilyov, ahead of Bagration. The latter was forced to turn south and to ensure the safe crossing of the Dnieper he detached the Raevskii corps, which, if possible, had to recapture the city or at least detain the French until the 2 Army entered the direct route to Vitebsk.

23 July in 11 km from Mogilev, a battle took place near the village of Saltanovka. During 10-hours, Raevsky’s corps fought against the 5 divisions of the French. At the moment when the outcome of the battle hung in the balance, Rajevsky personally led the attack of the Smolensk regiment. The French were overthrown. According to legend, at the moment of the attack, both his sons were next to Nikolai Nikolayevich, but he himself later said that they did not take part in the battle that morning. 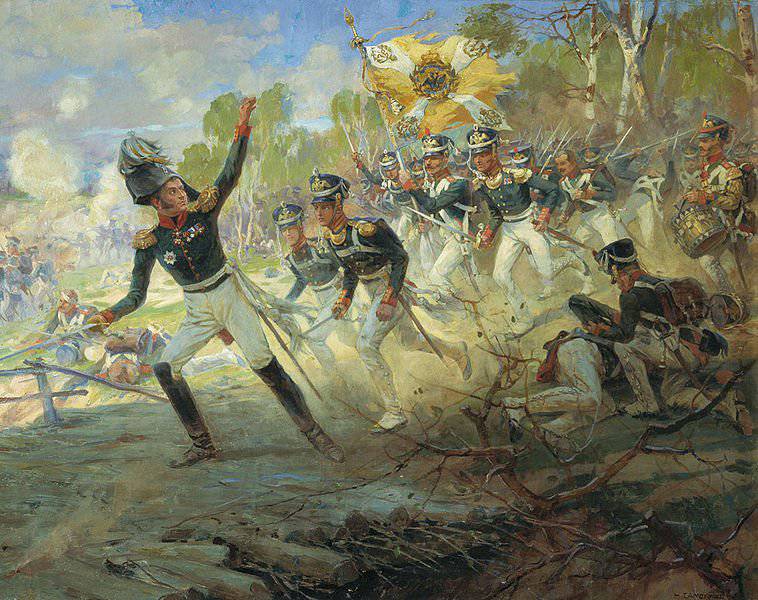 By night Raevsky’s corps, retaining combat capability, managed to retreat, while Davout remained in position, waiting for the main forces of Bagration’s army, which at that moment was shipped across the Dnieper, much to the south of Mogilyov, at Novyi Bykhovo.

Further events would also have developed dangerously for the Russian army, if not for the successful actions of General Neverovsky’s division near Krasny, thanks to which Raevsky’s corps was in Smolensk before the French. Nevertheless, before the approach of the main forces, he had to hold out for at least a day against the 180-thousandth army commanded by Napoleon.

A fierce battle unfolded outside the city. The 15-thousandth corps of Raevsky steadfastly held the fortifications erected during the time of Godunov, and did not allow the French to seize the key strategic position.

On the following day, Raevsky's corps replaced the 3 Infantry Division of General Dokhturov.

The battle near Smolensk allowed the 1 and 2 Russian armies to unite and continue the organized retreat inland, to Moscow ...
Borodino was one of the bloodiest battles of the time, military historians call it "the beginning of the artillery era." It is not surprising, because at the front of the entire length of 5 km, on both sides, almost 160 thousands of people came together in combat and about 700 guns. Losses from artillery fire on that day were simply monstrous.

Kurgan height (or the Rayevsky battery as it was called later) was in the center of the Russian position and dominated the whole area.
Understanding the importance of the position, on it all day, on the eve of the battle, earthen fortifications were built, in addition a ditch was dug. By the beginning of the battle, the already profitable hill had become a small fortress with 18 guns and a brave garrison.

Borodino. The attack on the battery Rajewski. F.A. Rubo, 1913

... In the middle of the day, Napoleon transferred the main blow from the left flank to the center of the Russian army - to the Raevsky battery. After a powerful artillery preparation, the French managed to briefly take the height by the forces of three infantry divisions and several cavalry regiments. The situation straightened General Yermolov, following on the orders of Kutuzov on the left flank.

Quickly assessing the seriousness of the situation, Yermolov, taking only one battalion of the Ufa regiment, attacked the French. It would have been a pure adventure without any hope of success if the glorified general had not stumbled upon two Chasseurs regiments along the way. These forces the French were knocked out of the battery. Later, the soldiers of the Great Army, will call Kurgan height "cemetery of the French cavalry."

By the end of the day, from the 10-thousandth corps, according to Nikolai Nikolayevich himself, there are hardly any 700 people left.

About four o'clock in the evening, the French, at the cost of enormous losses, still occupied the battery, but this was no longer of strategic importance.

After the battle of Borodino - at the council in Fili - Rajevsky spoke in favor of leaving Moscow, believing that it was more important to save the army.

When Napoleon left the ravaged city, the Russian army was faced with the task of blocking the French from entering the Kaluga road.

In the battle of Maloyaroslavtsy, Raevsky’s fresh corps was replaced by exhausted Dokhturov soldiers. By the time the French managed to take possession of the ruins of the town, the 70-thousandth Russian army had already strengthened its positions in 2-s from the city, blocking the exits to the road. Attacking a prepared enemy by Napoleon would be pure insanity. The French retreated.

In November, the corps of Nikolai Raevsky, in fact, completed the extermination of the corps of Marshal Ney in a three-day battle near Red.

After the battle, Nikolai Nikolayevich takes sick leave. The consequences of numerous wounds and overstrain of forces began to affect.
Raevsky will return to the army in the midst of a foreign campaign. Will take part in many battles, including the Battle of Kulm, the battles for Dresden and Paris ... and many others.

Separately, it is worth mentioning the “Battle of the Nations” under Leipzig, where, thanks to the courage and valor of the Grenadier Corps, under the command of Rajewski, the center of the Allied army survived.

With the end of the war, Rajewski went to Kiev, where the 4 th Infantry Corps was stationed. At this time, he often traveled with his family to the Crimea and the Caucasus.

In 1824, she is dismissed from the service “until the disease is cured”

The inscription on the tombstone is inscribed:
He was in Smolensk shield,
In Paris, the sword of Russia.