May 1941. Where are the German tanks and motorized infantry? 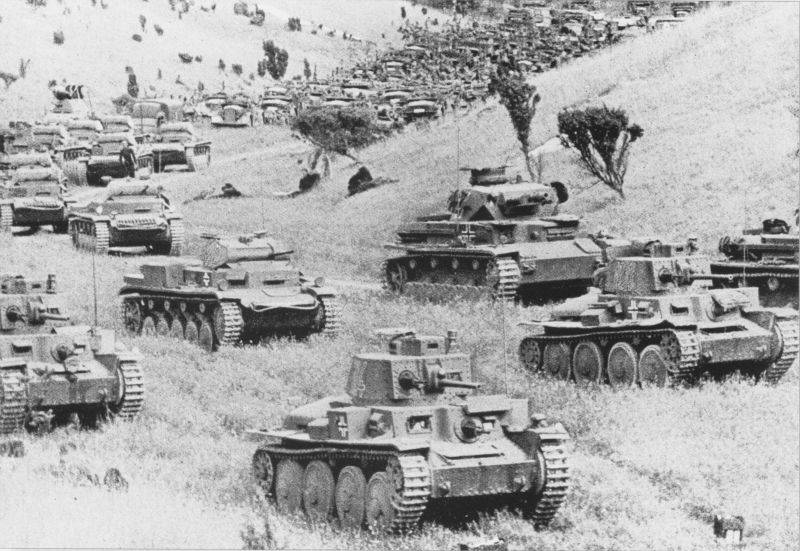 
In the previous part it was shown that in the majority of RMs that were included in the document "Dislocation of German units and formations by groupings in the border strip with the USSR on 1.6.41 (according to intelligence data and data from RO PribOVO, RO headquarters ZAPOVO, RO headquarters KOVO", it was said about the deployment of troops as of May 27. Therefore, the materials from this document can be compared with the data shown on the map of the operational department of the General Staff of the Wehrmacht ground forces from 27.5.41. Read the document "Dislocation of German units ..." can in this article.

Since May 1941, in the Republic of Uzbekistan it was believed that the German grouping concentrated against the USSR was deployed on the territory of East Prussia, former Poland, Romania (in Moldova and Northern Dobrudja), the Carpathian Ukraine (Hungary) and Slovakia.

The German command did not hide the presence of large infantry groupings at the border, reinforced with artillery, cavalry and tank units. Probably, with this approach, it tried to hide from our command the preparation for the blitzkrieg, which was to take place in less than a month.

In the new part, we will begin our consideration of RMs concerning German armored and motorized divisions. Let me remind you that on 25.4.41 our intelligence knew about the presence of nine tank and seven motorized divisions at the border. In fact, at this time in East Prussia, since the fall of 1940, there were the 1st and 6th etc. At the end of April 1941, the 4th TD began to arrive in the Poznan region. There were no other panzer or motorized German divisions near our border.

Earlier, the author promised to provide links to German maps that he used in his materials. Most of the documents used are on the site "Russian-German project for the digitization of German documents in the archives of the Russian Federation"... Maps are in the section Inventory 12451 - General Command of the Ground Forces (OKH) in cases from No. 799 to No. 844. Especially for Comrade I inform you that in the listed cases there are also German maps with a plotted intelligence situation. I wish all the readers who like to understand the maps of the Second World War success in this difficult field !!

On June 15, in the report No. 5 (for the West) of the RU, the information about the mobile troops, which was given in the report of May 31, was repeated.

The figure shows a fragment cards of the operational department of the General Staff of the Wehrmacht ground forces from 27.5.41 g.

The combination of the figures below should be carried out by the "1st cd" icon in the orange rectangle. 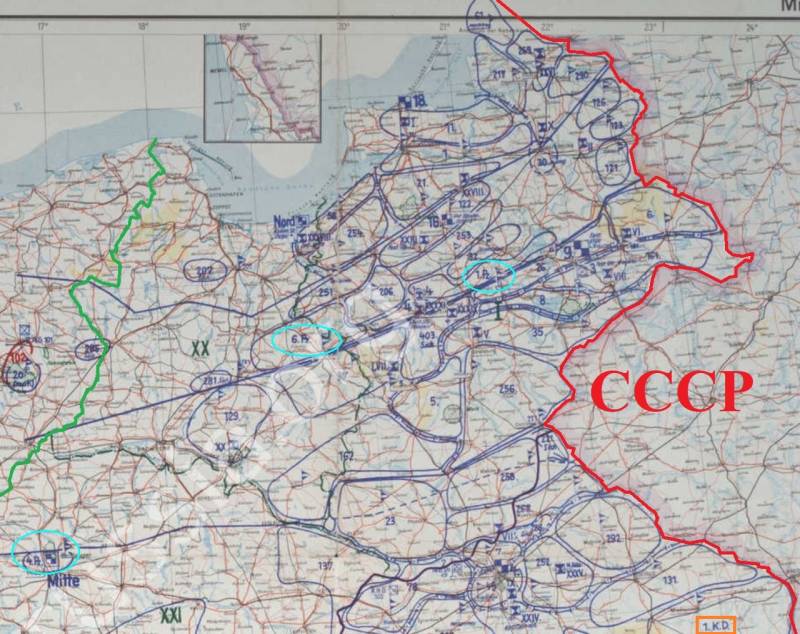 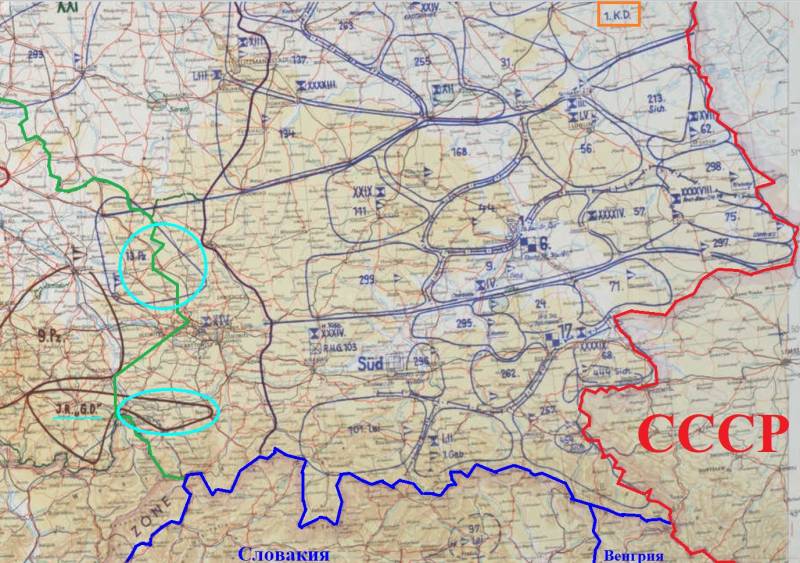 Connections that are being redeployed are easily identified on maps by their designations. 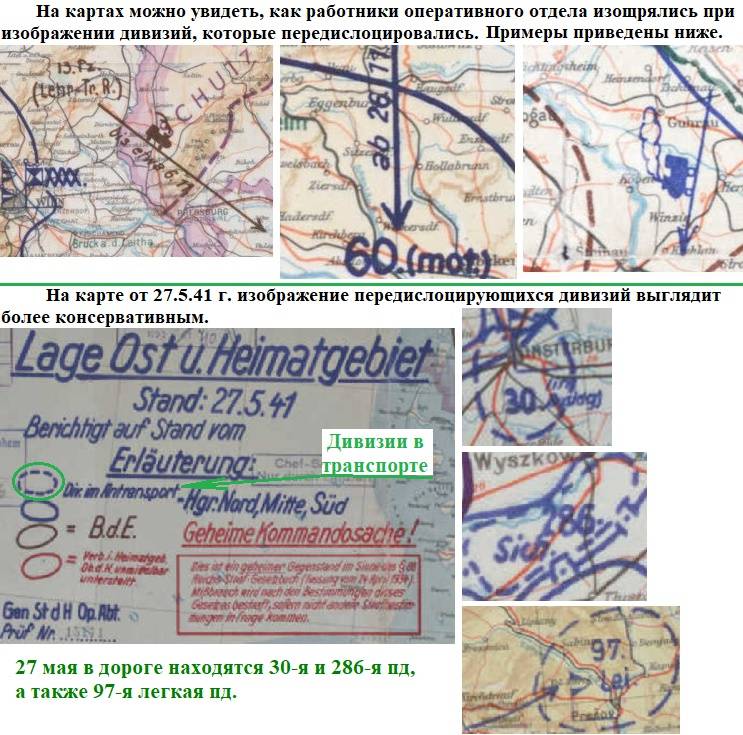 The picture below shows the locations of seventeen Wehrmacht armored divisions as of 27.5.41/5/15. Three divisions (16th, XNUMXth and XNUMXth) have information that they were outside East Prussia and the former Poland. 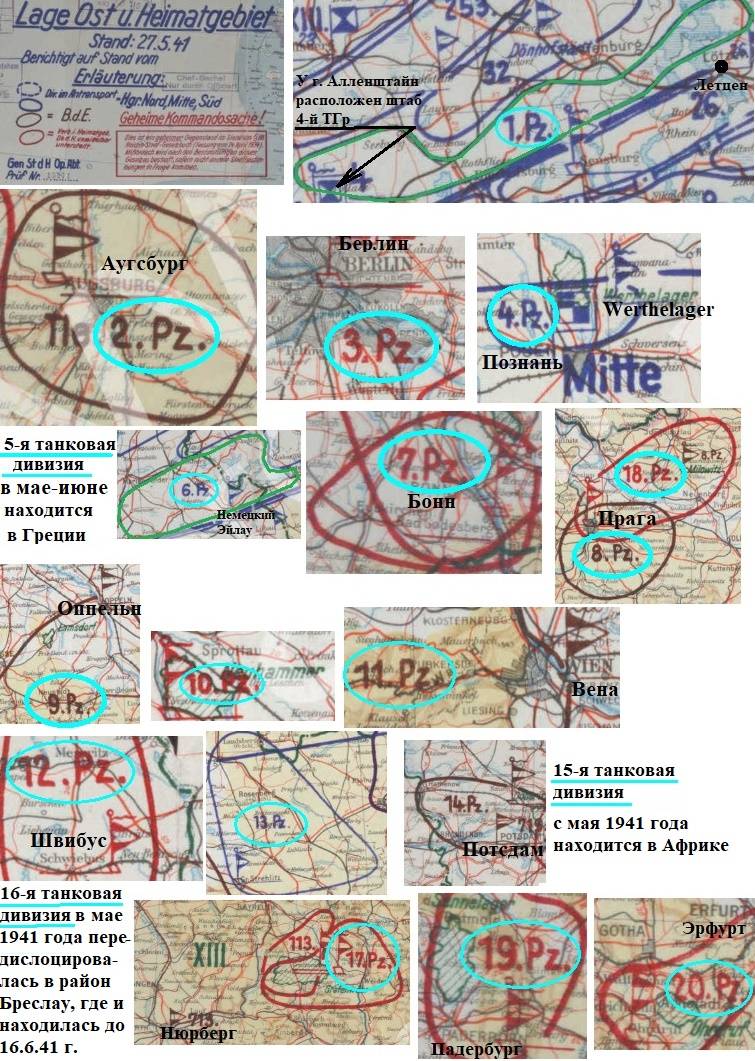 From the figure it can be concluded that as of May 27, none of the tank divisions moved to the East. Thus, in addition to the 1st, 4th, 6th TD, parts of the 13th TD, other tank formations on the territory of East Prussia and former Poland did not have.

The figure below shows the locations of eleven motorized divisions and one motorized regiment as of 27.5.41. Three divisions have information that they were located outside East Prussia and the former Poland. 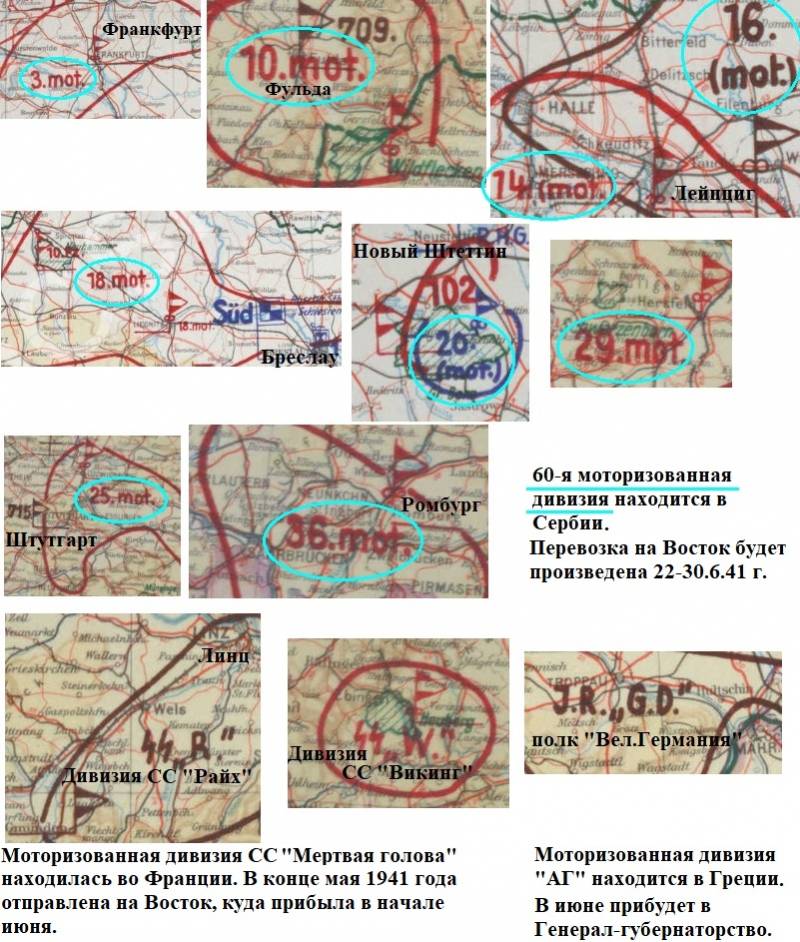 The presented fragments of the maps testify to the error of our reconnaissance in determining the number of tank and motorized divisions concentrated at our borders at the end of May 1941.

Of the six battalions, two were in Scandinavia, one was only formed on the island of Crete. We accept that the remaining three battalions are at our border. Even so, intelligence was wrong 4,3 times ...

What units and formations were issued for tank and motorized divisions?

The figures below will show the detected mobile German troops, which are plotted on the map of the operational department of the General Staff of the Wehrmacht Ground Forces from 27.5.41/XNUMX/XNUMX.

To the right, a motorized and tank regiment was found in Tomashov. This is again a mistake, since the city has the headquarters of the 297th Infantry Division and its units. The infantry division does not include motorized infantry and tank units. 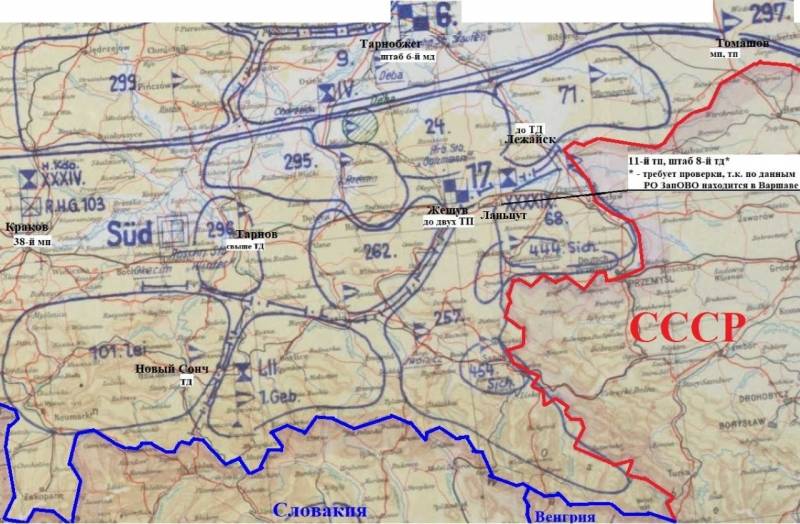 Up to a tank division was found in Lezhaisk. Apart from units of the 71st Infantry Division, there are no more enemy units in this area. Let me remind you that the uniform of the tankers is significantly different from the uniform of the military personnel of other troops, the military color (waffenfarbe) of the tankers is pink. The only explanation: someone portrayed this tank division or spread rumors about it ... 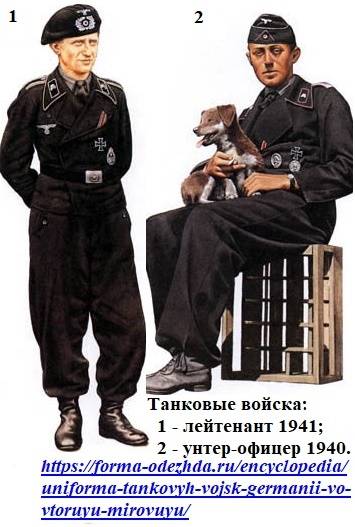 The headquarters of the 8th td and 11th tp are located in the town of Lancut. The data requires verification, since the second tank division with the same number, according to RO ZAPOVO, will be in Warsaw and will be there until the start of the war. It can be seen that the headquarters of the 49th Mountain Corps is stationed in Lancut and parts of the 68th Infantry Division may be located. But they have no tanks? .. If the intelligence knew about the colors of the army (waffenfarbe), they could confuse the shades of green: mountain riflemen or motorized infantry ...

There are up to two tank regiments in the city of Rzeszow. The headquarters of the 17th Army is located in Rzeszow, which is confused with tank regiments ...

Consider the following figure. The headquarters of a tank brigade was found in Dombrow, where it will remain until 21 June. There was no longer such a connection in the German armed forces. A motorized regiment was found in the city of Radzyn. In this area, except for the 1st Cavalry Division, there are no other divisions and, therefore, there are no other units. It is most likely that intelligence could mistake one of the units of the cavalry division for a motorized regiment, but what kind of unit it is is difficult to imagine ...

2nd MP in the city of Lublin. It couldn't be there. It is most likely that one of the vehicle supply columns of the 3rd or 55th Army Corps or a subdivision of these headquarters is confused with this regiment. 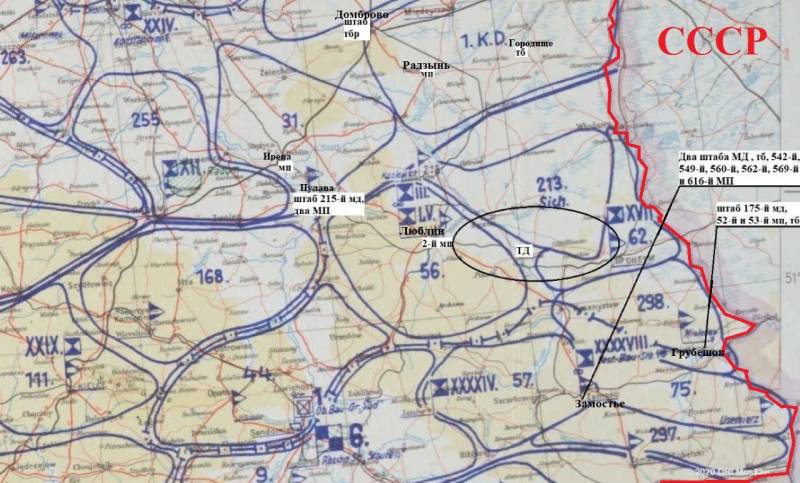 According to intelligence, a tank division is located between Lublin and Chelm. There is, of course, no tank division here, but there are units of the 56th and 62nd infantry divisions, as well as the 213rd security division.

In Zamoć, reconnaissance found two headquarters of motorized divisions and six regiments from their composition with exact numbers. In fact, the headquarters of the 48th Army Corps and the 57th Infantry Division are stationed in Zamoć. As part of the 57th Infantry Division, there are no parts with the indicated numbers. Since six "exact" numbers of non-existent motorized regiments are known at once, this can only be a deliberate misinformation of the German command.

The headquarters of the 175th md, 52nd and 53rd md are located in the town of Grubieshove. The 298th Infantry Division is stationed in this area, which does not include units numbered 175, 52 or 53. The exact name of a non-existent motorized division and two motorized regiments, which cannot be here, is again German disinformation.

New drawing. In Allenstein, according to intelligence, there is a tank regiment. Most likely, he was confused with the headquarters of the 4th TGR. The 4th TGr was in this area from February to mid-June 1941 and was not detected by our intelligence.

In Naidenburg, the 48th MP was discovered. There are many parts here, but not a single motorized one. It is difficult to say what was taken for this regiment ... One can only say that the 48th regiment is not among the motorized regiments of the MD and among the rifle regiments, etc. 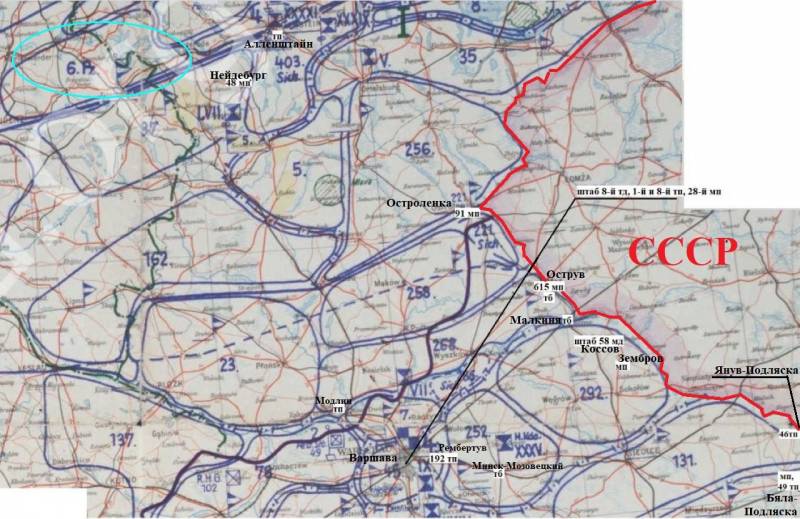 In Ostrolenka, the 91st battalion was found. A unit with this number is not among the units of the 221st Infantry and 221st Security Divisions.

In Ostrow the 615th battalion was found. A part with this number is also missing in the 268th pd.

The headquarters of the 58th MD was found in Kossovo, and a motorized regiment in Zembrov. There are no such units in this area.

Motorized regiments with numbers 91 and 615, as well as the 58th MD did not exist in the Wehrmacht.

In Janow Podlaski, the 46th tank regiment was discovered, and in Biala Podlaski the 49th tank and motorized regiments. The Wehrmacht has neither the 46th nor the 49th TP. Apart from units of the 131st Infantry Division and the 1st CD, there are no other mobile troops in this area.

Many tank units were found in the Warsaw area: the 8th tank division, the 1st, 8th and 192nd tank regiments, a tank regiment with an unknown number and the 28th battalion regiment. In total, up to two tank divisions are recruited, which are not here. Up to two panzer divisions in the area will be tracked by our reconnaissance before the start of the war. Unfortunately, intelligence would never have been able to timely detect the movement of these non-existent troops to the border and warn their command ...

At the same time, you can see that the 6th TD, which is located in the same area, has not been discovered by any of our intelligence services since the fall of 1940. Therefore, we can say that the measures of counteraction to our intelligence on the part of the German special services were very effective.

The last drawing. In Shilute, the 61st road is confused with the 161st road. The error will not be disclosed because in the RU document of 22.6.41, the 161st MD will appear against the troops of the North-Western Front. There was no motorized division with this number in the German armed forces.

In the area of ​​Tilsit and its environs, according to intelligence, many mobile troops are deployed: units of the 20th TD, 44th, 202nd, 204th, 206th, 227th, 291st, 350th and 510th mp. Although the summary indicates regarding the 202nd, 204th and 227th regiments that the data require verification, but in the report of RO PribOVO dated June 18, almost all of these regiments will be located in the same areas. Only the number of one regiment will change - from the 510th to the 210th MP. There were no regiments with the indicated numbers among the motorized and rifle regiments of the Wehrmacht. We are again faced with very large-scale disinformation ... 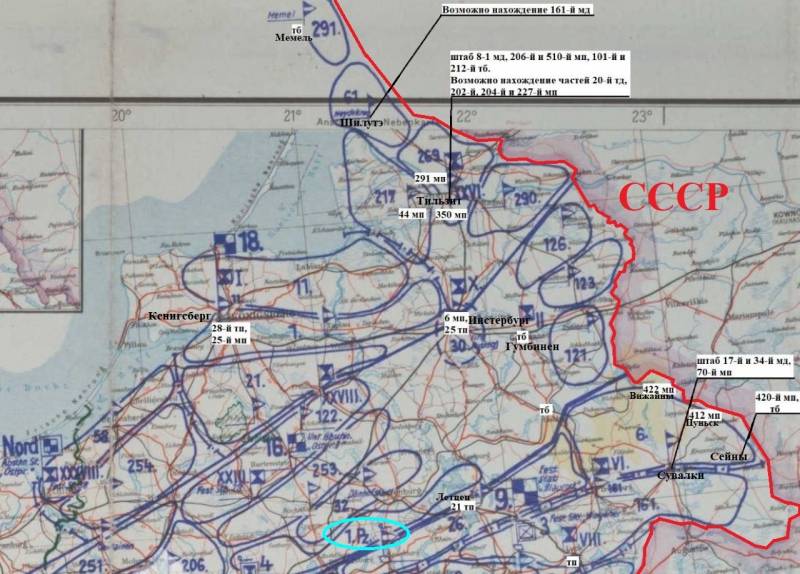 A tank regiment in the Letzen area could be confused with the advance group of the headquarters of the 3rd TGr.

Number 21 TP could be confused with parts of the 1st etc.

Thus, we can conclude that, at best, our intelligence was able to accurately detect only one tank regiment in the area of ​​the town of Letzen. All other RM on the presence of 27 tank and motorized divisions, unfortunately, turned out to be false and disinformation of the German command ...

In the next parts we will try to understand the question of how whether something has changed in the authentic RM in June 1941.

Author:
Eugene
Articles from this series:
Reconnaissance about German infantry and cavalry near the border of the USSR
Intelligence gathering on the eve of the war

Ctrl Enter
Noticed oshЫbku Highlight text and press. Ctrl + Enter
We are
Intelligence gathering on the eve of the war1941. Intelligence on the headquarters of the German armies and tank groups
Military Reviewin Yandex News
Military Reviewin Google News
126 comments
Information
Dear reader, to leave comments on the publication, you must sign in.