August 6 2012
11
In the descriptions of the Iraqi armed forces and in military conflicts with the participation of Iraq, the reference to the Al-Fao and Majnun self-propelled artillery installations now and then flashes, but there is very little information about this technique. This article will bring together the few information that is available on the ACS to date.

The beginning of the development of technology - 1987 year. Spanish and French designers take part in the work on self-propelled artillery systems. In Spain (the Tribiland company) they worked on the undercarriage of the ACS, in France they were working on the guns of the future ACS. Both combat vehicles were created on the basis of the South African machine “Rhino”, on which the South African self-propelled artillery gun G6 was built. 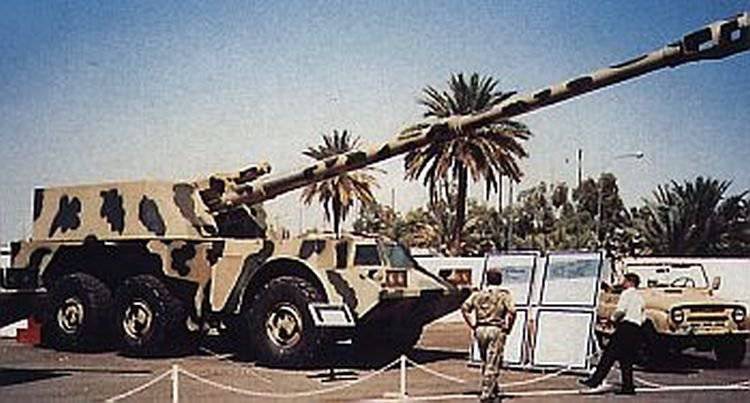 The first public appearance of the new ACS is the spring of 1989. Two prototypes were transported from Spain to Iraq on the An-124 transport aircraft, to the second international exhibition of military equipment, held in the capital of Iraq - Baghdad. Accurate data on the adoption of the two SAU data in the ground forces of Iraq is not, according to some data, only these two samples were accepted. Data on serial production is not. In subsequent military conflicts, self-propelled howitzers did not participate.

Before we continue the story, we note that the creation of new self-propelled guns for the Iraqi SV was not without the participation of a talented Canadian design engineer Gerald Bull, who was engaged in the creation of long-range guns. Under his personal leadership, the Babylon project was launched in Iraq - the creation of a supergun with a caliber 350mm with a barrel length of 160 meters. The estimated firing range of up to one thousand kilometers of conventional shells and up to two thousand - rocket ammunition. Such weapon could hold the entire region at gunpoint, so it is not surprising that the assassination of a Canadian engineer in 1990 was attributed to Israeli security forces. Based on the opinions of specialists who examined the remnants of super-weapons, after the end of the military conflict in the Persian Gulf, D. Bull had every chance to finish building his gun, but after his death all the work on gun completion was stopped, perhaps Iraq did not have enough time and money - in 1991, the Persian Gulf War began. 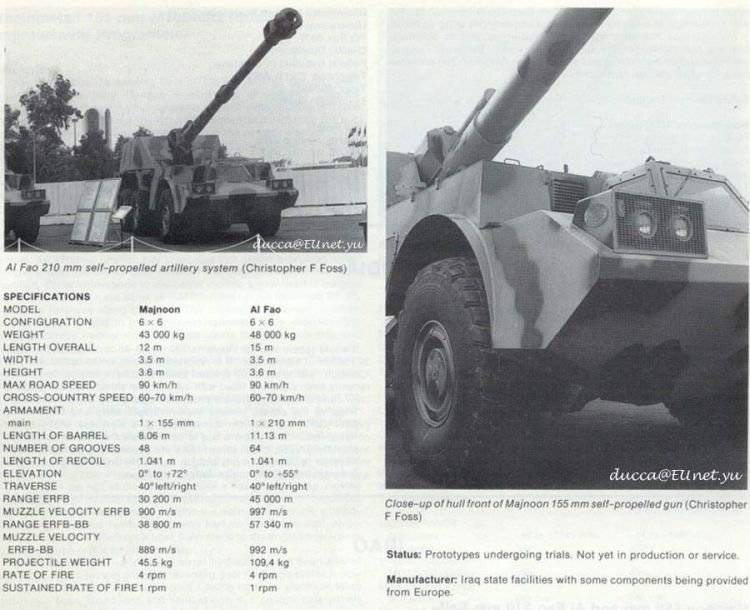 Design and construction of Iraqi self-propelled howitzers
Both howitzers have the same chassis. Department of management performed in the front of the case in which the driver-mechanic. The driver-mechanic's seat is made according to the type of ACS G6, the review is carried out through three armored windows, the driver-mechanic is seated through a hatch in the upper part of the cab. Next is MTO, in which a diesel engine was installed from the German company Mercedes-Benz, with the power characteristics of the HP 560. OU is completely isolated from MTO. In the back of the case installed tower part. On each side there are access hatches for landing the crew of the car. In the back of the tower there is a special boot for loading ammunition into the car. At the bottom there are two hatches for emergency exit from the tower of the machine. The chassis is provided with wheels with 21.00 XR25 tires and an automatic pressure support system. For the firing of a howitzer, in additional supports, according to the calculations of designers, there is no need.