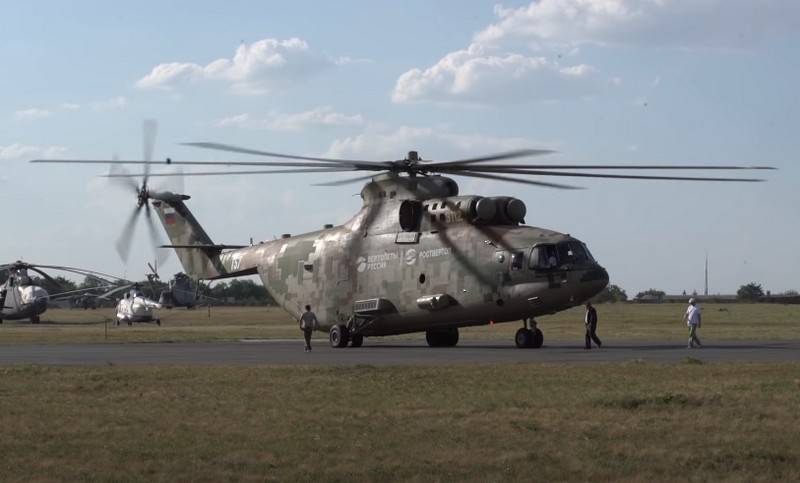 Serial production of the heavy military transport helicopter Mi-26T2V will begin in the first half of 2021 after the end of state tests. This was announced by Andrey Boginsky, CEO of the Russian Helicopters holding.

Our first task today is to complete tests under the contract concluded with the Ministry of Defense of the Mi-26T2V in order to receive the letter "O1" in the first half of next year (start of mass production - approx.). Joint flight tests are underway
- declared Boginsky.

Also, according to him, the issue of creating an Arctic version of the Mi-26 is currently being worked out. Work on the Arctic option is planned to begin after the completion of work on the Mi-26T2V.

At the end of December last year, Boginsky said that the factory tests of the Mi-26T2V helicopter were completed successfully and state tests are beginning, which will last throughout 2020 and will take place at four test ranges. A mixed crew of representatives of the holding and the Ministry of Defense will take part in the tests.

As previously reported, the first flight of the upgraded Mi-26T2V helicopter took place in August 2018, and preliminary tests, which confirmed the characteristics of the vehicle, were completed in January 2019.

With a maximum take-off weight of up to 56 tons, the helicopter can lift 20 tons of cargo into the air, both inside the cabin and on the external sling. The Ministry of Defense intends to purchase at least 10 Mi-26T2V.
Ctrl Enter
Noticed oshЫbku Highlight text and press. Ctrl + Enter
We are
The Ministry of Defense began state testing of a heavy helicopter Mi-26T2VThe world's heaviest helicopter MI-26Т2В will receive the arctic version
Military Reviewin Yandex News
Military Reviewin Google News
34 comments
Information
Dear reader, to leave comments on the publication, you must to register.