Armored car from the country of kangaroo 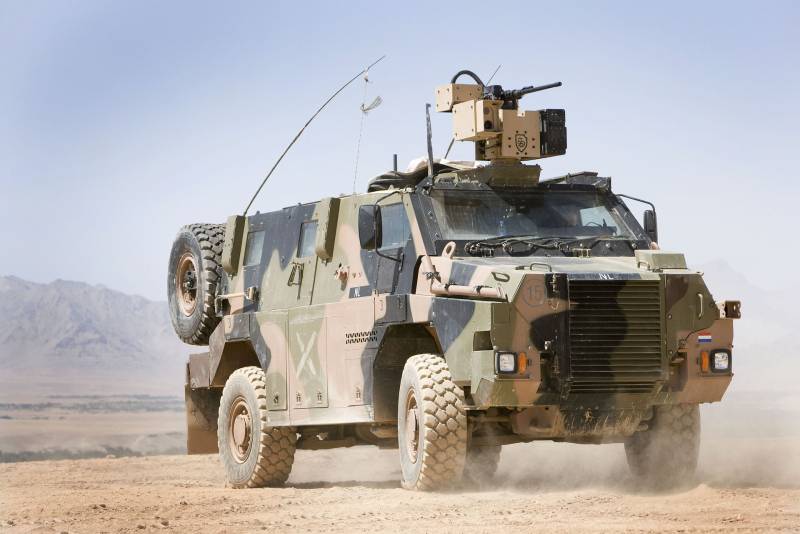 Armored car Bushmaster of the Dutch army in Afghanistan

The history of the armored car Bushmaster 4x4

It is important to understand that, first of all, the Australian army needed a new combat vehicle designed to transport troops, cargo and equipment over long distances; it was not intended to be used in battles. Before the outbreak of hostilities, the infantry had to drop out of the vehicle. Since only light armor was provided for, the designation IMV was invented for the new armored vehicle to distinguish the armored car from the heavier armored personnel carriers: the tracked M113 or the wheeled ASLAV. However, it soon became clear that the use of high-strength steel provided the Bushmaster 4x4 with better ballistic protection than the M113's aluminum armor. At the same time, the new Australian armored car also received mine protection, so the designation of the vehicle was soon changed from IMV to PMV (Protected Mobility Vehicle, protected vehicle). 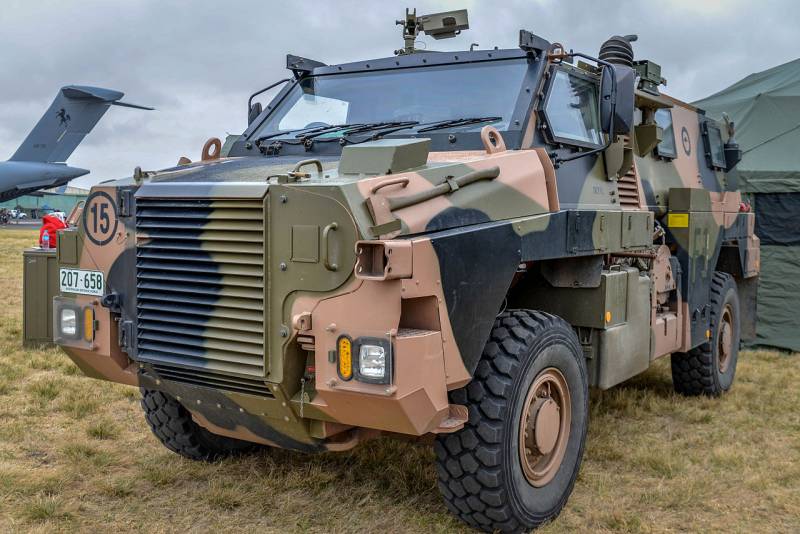 The first 11 serial combat vehicles underwent a series of extensive military trials from mid-2003 to mid-2004. Mass serial production of the new Bushmaster 4x4 armored vehicle began in Australia only in 2005. Since then, Thales Australia has already assembled about 1200 armored vehicles, the vast majority of which are in service with the Australian army.

Today, Thales Australia offers its customers various models of the Bushmaster 4x4 armored vehicle: armored personnel carrier, command post vehicle, patrol vehicle, transport vehicle, carrier of various weapons systems, and protected medical vehicle. According to the manufacturer's assurances, a combat vehicle with a maximum weight of 15,4 tons is able to provide reliable protection for up to 10 passengers and combines reliable ballistic protection and explosion protection with good mobility and maneuverability. At the same time, the armored car is in service with various countries and has already managed to take part in local conflicts in recent years, having confirmed its effectiveness in combat conditions. The armored vehicle really saved the lives of the landing party. 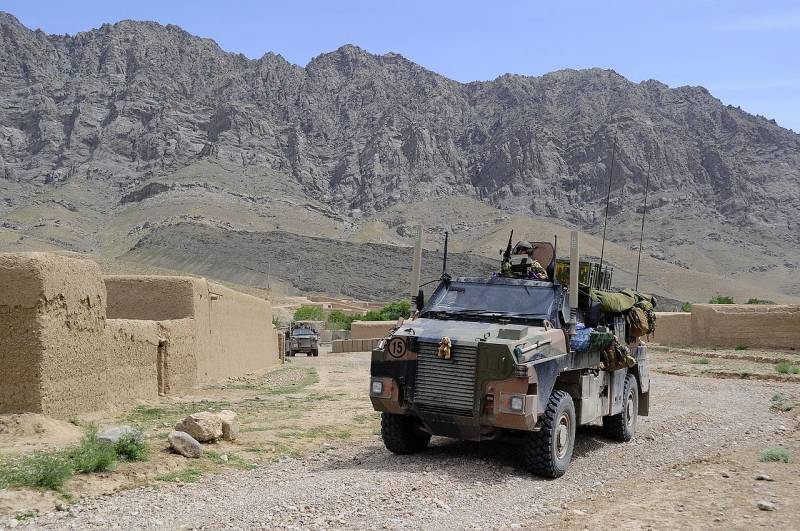 Bushmaster armored vehicles in Afghanistan
Bushmaster armored vehicles were operated in the Middle East, Africa and the Pacific Ocean, having proven themselves in various climatic conditions and combat situations. A feature of the armored vehicle is a large armored all-welded hull with a volume of 11 cubic meters. The entire space is air-conditioned and accommodates up to 10 people, including the driver. The bottom of the armored car has a V-shape and reliably protects the troops from explosive devices: both standard mines and homemade land mines. According to the developers, the armored vehicle is capable of surviving an explosion of up to 9,5 kg in TNT equivalent without a threat to the life of the crew and the landing force. At the same time, the standard level of ballistic protection is limited to 7,62 mm caliber bullets, but can be enhanced at the request of the customer.

Despite the impressive weight (the combat weight of the armored car reaches 15,4 tons), the car turned out to be quite mobile and fast. This is largely due to the installation of a Caterpillar turbocharged diesel engine with a volume of 7,2 liters and a capacity of 300 hp. from. The engine has enough capabilities to provide the armored vehicle with a maximum speed of 100 km / h. At the same time, the cruising range on the highway reaches 800 km. In turn, the presence of an independent suspension, four-wheel drive and high ground clearance (470 mm) provide the Bushmaster 4x4 armored car with high cross-country ability on various terrain.

The maximum vehicle length is 7,18 meters, width - 2,48 meters, height - 2,65 meters. The dimensions of the armored car made it possible to equip it with a spacious hull with a large useful internal volume. The car was originally created for the conditions of Northern Australia, including a desert area, so it immediately received air conditioning. The internal volume and carrying capacity of up to 4 tons make it possible to ensure the autonomy of the landing of 9 people for up to three days, for such a period there is enough fuel, provisions and ammunition. 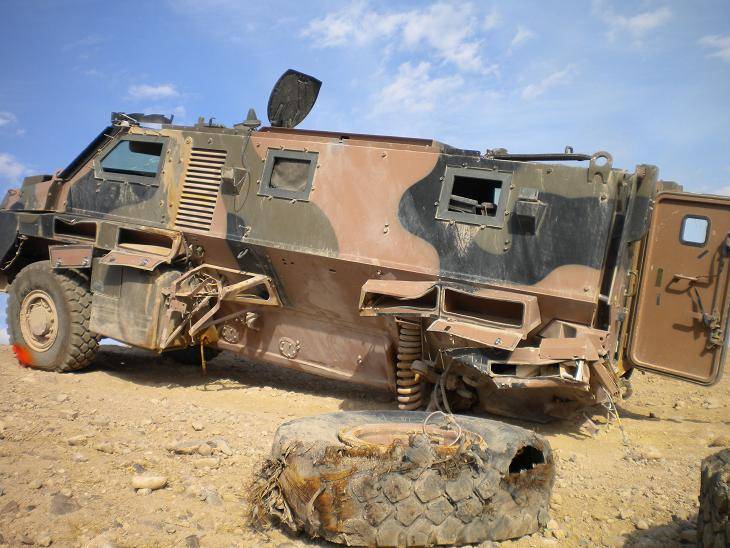 Bushmaster armored car after being blown up by an improvised explosive device
At the same time, the Bushmaster armored car is designed according to the scheme of conventional bonnet trucks. The armored vehicle has a front engine, behind it is the cockpit, followed by a compartment for the landing. An important feature is that the cockpit and the troop compartment are made in the same volume. Access to the armored car is through a door located in the aft armor plate of the hull. In addition, there are five hatches on the roof of the armored vehicle. A turret can be installed in front of the front hatch to accommodate a 7,62 mm or 12,7 mm heavy machine gun. It is possible to install remotely controlled weapon modules with machine-gun armament or a NATO-type 40-mm automatic grenade launcher instead of the turret. There is also the possibility of installing ATGM.

Contract for the supply of Bushmaster NZ5.5 to New Zealand 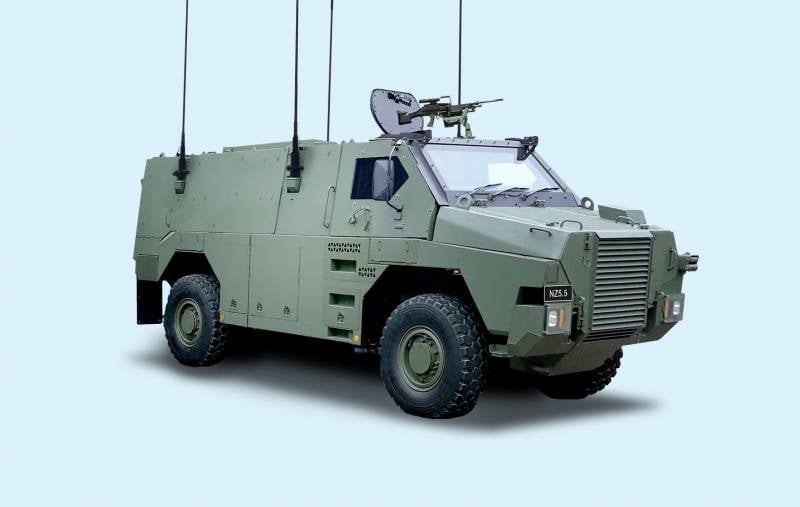