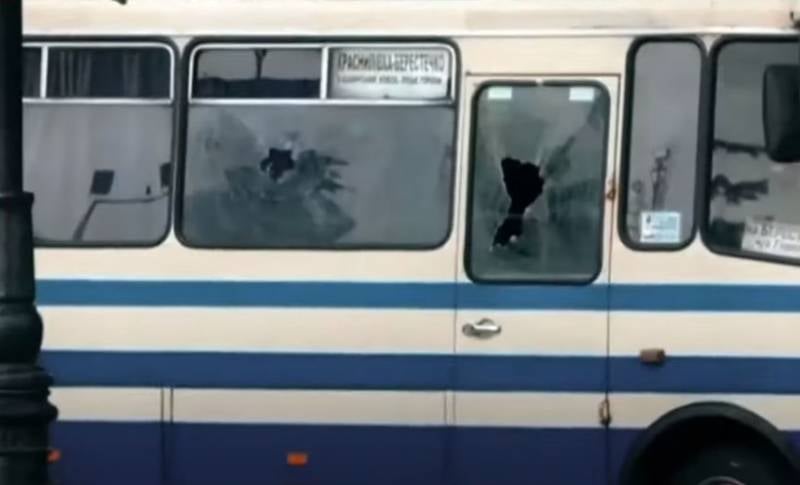 The Ukrainian media began to exaggerate the data that the terrorist who took hostages on the bus in Lutsk is a native of the Orenburg region. The notorious A. Biletskiy, representatives of the media and the blogosphere of Ukraine have already begun to link the birthplace of Maxim "Bad" (as the criminal calls himself) with the "Russian trace", "Lubyanka", etc. By this logic, it is strange that the natives of the RSFSR, who worked or continue to work in the structures of power in Ukraine, have not yet had time to connect with the "secret operation of the KGB-FSB." And the native of the Kursk region Pavel Klimkin (former Minister of Foreign Affairs) did not raise suspicions?


Maxim Krivosh (the real name of the hostage-taker in Lutsk) has been convicted twice, and he was subjected to compulsory psychiatric treatment. At the same time, the head of the Ministry of Internal Affairs of Ukraine Avakov, who arrived at the scene, said that "the journalists are spreading false information - Krivosh was not a patient in a psychiatric clinic." It can be assumed that broadcasting such data, which is broadcast by Arsen Avakov, was one of the terrorist's demands.

Let us recall that, on the whole, the range of Krivosh's requirements is rather strange. He demands from the representatives of the supreme power of Ukraine to issue appeals with the statement "I am a terrorist", and from President Zelensky he demands to post on the page on the social network a call to watch the film "Earthlings" of 2005 about the inhuman treatment of animals.

Krivosh previously gave half an hour to fulfill his requirements. As a result, the hostages have been on the bus for about 10 hours. At the same time, shots sound periodically in the center of Lutsk. One of the shots was fired when a Ukrainian police officer approached the bus and asked the terrorist to release a pregnant woman and a 15-year-old schoolboy. At the same time, Krivosh allowed to bring food and water to the bus.

Experts believe that the Ukrainian special services are not taking any action, waiting for dark. It is noted that the easiest option is to wait until the terrorist is simply exhausted and begins to fall asleep. But how much time must pass for this, and what Maxim "Bad" is ready to do if he feels that he is really falling asleep, and his requirements have not been met - the question is.

Moreover, it should be recalled that Krivosh announced the presence of several explosive devices located in different crowded places of Lutsk. According to him, they will be activated even if he himself perishes.

Some time ago, the Ministry of Internal Affairs of Ukraine reported that there was at least one wounded in the bus.

A recording of a conversation between Ukrainian journalists and a terrorist has appeared:


Krivosh says that if his demands are met, the hostages will be free. However, he adds that the hostages are in poor condition.

Ctrl Enter
Noticed oshЫbku Highlight text and press. Ctrl + Enter
We are
Reports from the militia of New Russia for 27-28 September 2014 of the yearYuri Drozdov: Russia prepared the role of the sacrificial calf
Military Reviewin Yandex News
Military Reviewin Google News
73 comments
Information
Dear reader, to leave comments on the publication, you must to register.