The first domestic military computer. How it all began 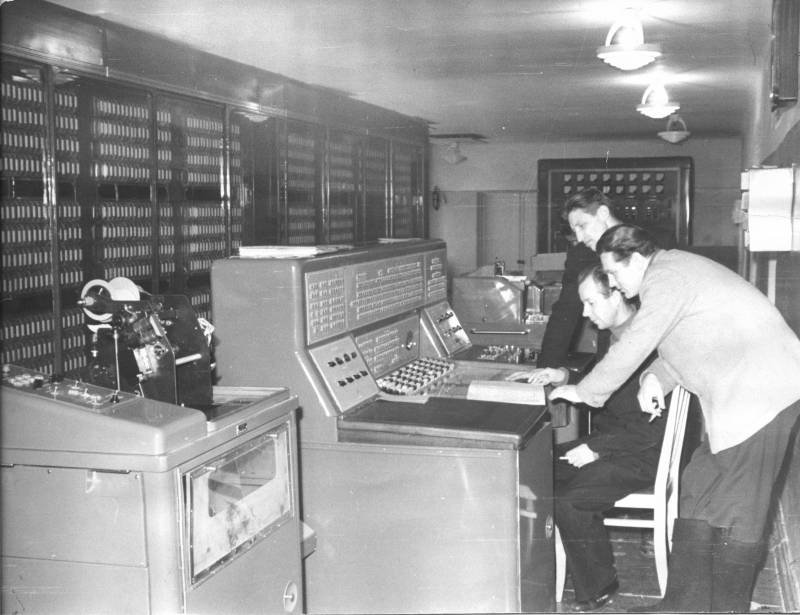 At the dawn of the advent of computer technology, the Soviet Union felt rather confident. In the first half of the 1950s, Soviet computers were the best in Europe, second only to some American commercial models. Electronic computers were widely used to solve various problems, primarily for calculations. They have found applications in science and industry. The military began to show interest in computers. The first Soviet military computers, which appeared in the late 1950s, were used in the country's missile defense and air defense systems.

Creation of the first Soviet computers

The famous Soviet scientist Sergei Alekseevich Lebedev, who was at the forefront of the birth of domestic computing technology, had a hand in the creation of the first Soviet computers. Today Sergei Lebedev is rightly considered the founder of the Soviet computer industry. It was under his direct supervision in 1948-1950 that the first in the country, as well as in continental Europe, the Small Electronic Counting Machine (MESM) was created. The development was carried out in Kiev at the Institute of Electrical Engineering of the Academy of Sciences of the Ukrainian SSR.

The development did not go unnoticed, and already in 1950 Sergei Alekseevich Lebedev moved to Moscow, to the Institute of Precision Mechanics and Computer Engineering of the USSR Academy of Sciences (ITMiVT). In the capital, the scientist began to develop an even more advanced computer, which was included in history as a Large (high-speed) electronic calculating machine (BESM-1). The chief designer of the new computer was Academician Sergei Alekseevich Lebedev, who quickly selected and united a team of like-minded people, including from promising students. In particular, students of the Moscow Power Engineering Institute Vsevolod Burtsev and Vladimir Melnikov were sent to practice at the institute, who in the future themselves will become outstanding domestic engineers, scientists and designers in the field of creating electronic computers.

The development of BESM-1 was fully completed by 1953. In total, one computer was assembled, the assembly was carried out at the Moscow plant of calculating and analytical machines. Assembled in a single copy, the computer was intended for solving large production and scientific problems. At the same time, it served as the basis for the development of future even more powerful computers, as well as specialized military computers. 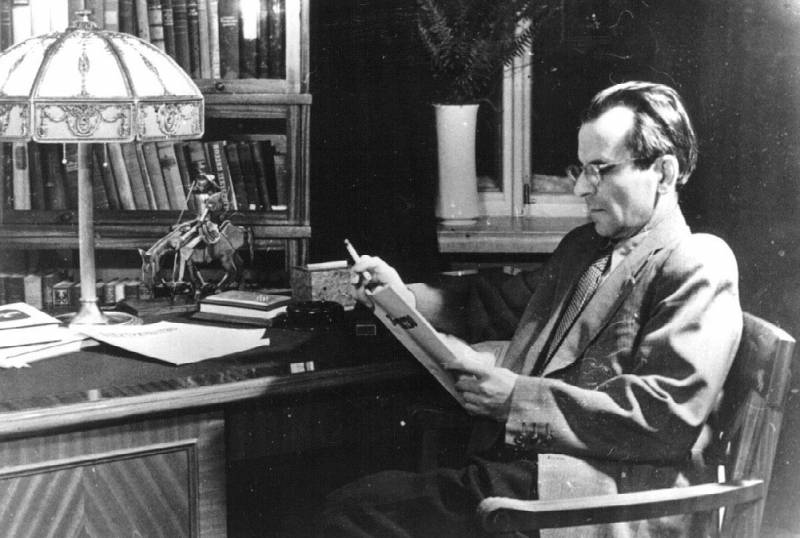 Sergei Alekseevich Lebedev, the founder of the Soviet computer industry
It should be noted that in the early 1950s, the USSR was rightly considered one of the leaders in the field of computer development. From the point of view of today, this sounds at least unusual, since by the end of its existence the USSR had lost this advantage, and modern Russia in the field of creating computer technology hopelessly lagged behind the most developed countries of the world. However, at the dawn of the formation of computers, everything was different. Assembled in 1953, BESM-1 was the fastest-operating electronic computer in Europe and one of the fastest-operating machines in the world. In terms of speed and memory capacity, this first Soviet supercomputer as of October 1953 was second only to the commercial model of the American company IBM - the IBM 701, whose deliveries to customers began in December 1952.

At the same time, computers of the early 1950s bear little resemblance to their modern counterparts. BESM-1 provided maximum performance at the level of 8-10 thousand operations per second. The computer received a parallel 39-bit floating point arithmetic logic device. The number of bits for instruction codes is 39. The operative memory (RAM) of the first full-fledged Soviet computer was based on ferrite cores, and its capacity was only 1024 words (earlier Soviet computers used memory on mercury tubes or potentioscopes).

In addition, the electronic computer received a long-term memory device (DZU) on semiconductor diodes, the capacity of the device was also 1024 words. Some of the most frequently encountered subroutines and constants were stored in DZU.

In addition, BESM-1 could work with information storage devices on magnetic tapes: four blocks designed for 30 thousand words each, and on an intermediate storage device on two magnetic drums, which ensured storage of 5120 words each. The speed of information exchange with the drum reached 800 numbers per second, with a magnetic tape - up to 400 numbers per second. The input of information into BESM-1 was carried out using a photo-reading device on a punched tape, and the output of information was made to a special electromechanical printing device. At the same time, there was no system software in the machine.

Outwardly, it was a fairly massive computing machine, the creation of which took about five thousand vacuum tubes. Structurally, this Soviet computer was mounted on one main rack, there was a separate DZU rack, as well as a power cabinet, since the computer consumed a fairly large amount of electricity - up to 30 kW (this excluding the cooling system). The size of the computer was also quite large: the occupied area was almost 100 square meters.

The appearance of the first Soviet full-fledged computer, the BESM-1, coincided with the beginning of the era of development in the Soviet Union of its own anti-missile defense (ABM) system. For the first time, they started talking about this in our country back in August 1953. It was then that seven marshals turned to ministries and institutions with instructions to create means of combating enemy ballistic missiles. Such weapon long-range action was rightly considered as the main means of delivering nuclear warheads to military and industrial facilities of the warring countries. For reliable interception of missiles, modern radars and new computers were needed, which would be responsible for calculating and controlling radar stations. 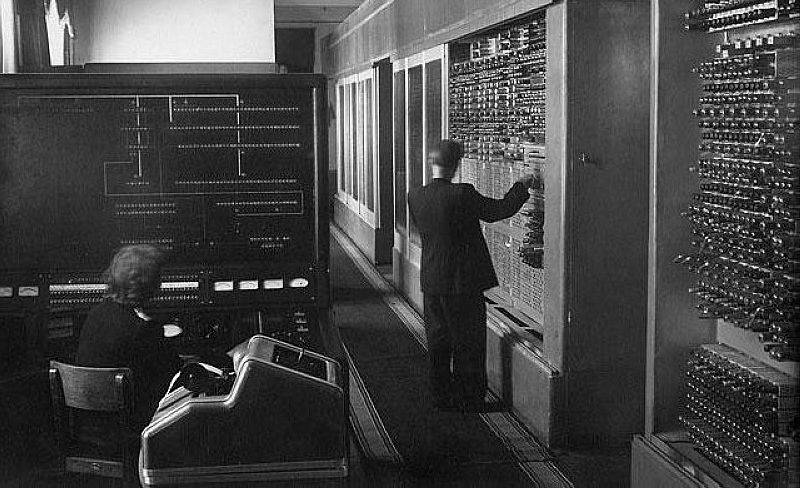 Computer BESM-1 on the first floor of the ITMiVT building in Moscow
Especially for the creation of the Soviet missile defense system as part of KB-1, a new special design bureau was formed - SKB-30. At the same time, the Soviet scientific base and industry expanded cooperation in the development of tools that could solve scientific and technical problems. In particular, the ITMiVT of the USSR Academy of Sciences received a special assignment from KB-1 to create a new digital machine, which, in terms of its speed, was supposed to surpass previous models and become the heart of the radar control system for long-range target tracking.

By 1956, the first work on the design of the new complex was completed, the defense of the draft design of the experimental missile defense system took place in March. In the same year, the USSR Ministry of Defense issued a permit not to build GNIIP-10 - the State Research and Development Testing Ground, which it was decided to place in the uninhabited Kazakh desert Betpak-Dala, between the western shore of the famous Lake Balkhash and the lower reaches of the Sarysu and Chu rivers. The experimental missile defense complex and the new anti-missile range were closely tied to each other, the chief designer of the entire system was Grigory Kisunko, a corresponding member of the USSR Academy of Sciences. At the same time, the director of ITMiVT Academician Sergei Lebedev issued a technical assignment for the creation of a new computer, which was designated M-40 and was originally intended for the "A" system. System "A" is the code name for the first strategic missile defense complex in the Soviet Union.

The task to develop a new supercomputer was given to two development groups, one of which was headed by Vsevolod Burtsev. Both groups successfully coped with the task. By 1958, two new M-40 electronic computers were ready. The computers were assembled by specialists from the Zagorsk Electromechanical Plant.

At the time of its creation, the M-40 machine became the fastest among all Soviet computers that were mass-produced in the country. At the same time, Vsevolod Burtsev proposed and implemented in practice a number of solutions that are very important for the development of domestic computer technology. In the military computer M-40, for the first time, the principles of parallelization of the computing process were implemented in practice at the hardware level of an electronic computer. All the main M-40 devices (arithmetic, external memory management, RAM, control) received autonomous control units and could work in parallel. Also, for the first time in the USSR, a multiplex data transmission channel was implemented. This solution made it possible, without slowing down the computing process of the computer, to receive and send the received information and data immediately from 10 asynchronously operating channels, the total throughput of which was estimated at one million bit / s. 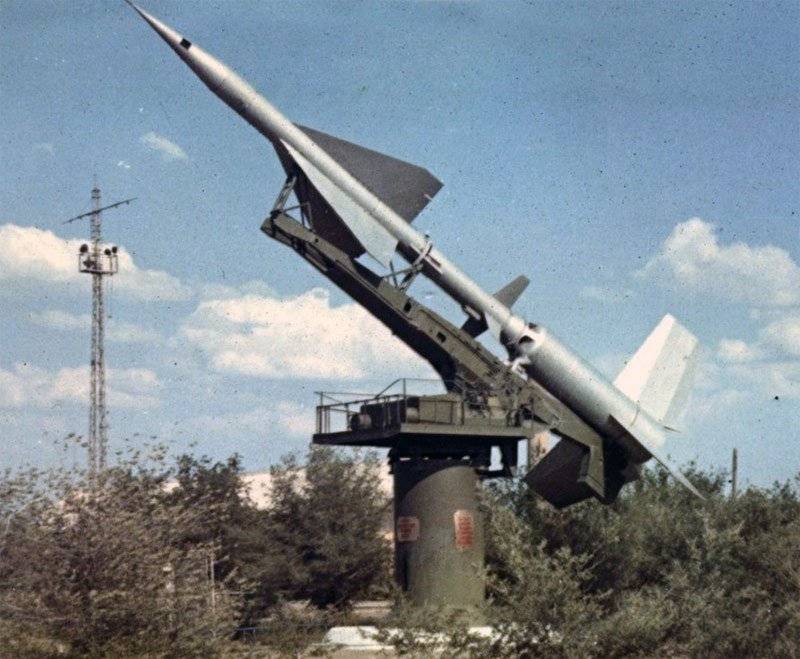 The first Soviet anti-missile V-1000
The M-40, as well as its further modernization, the M-50 (50 thousand floating point operations), were complex military complexes for the control of long-range radar and precise targeting of anti-missiles. They were responsible for the calculations required to build trajectories and target missiles at enemy ballistic missiles. On March 4, 1961, the first successful interception of a ballistic missile in world and domestic history was carried out at a specially created test site "A" in Kazakhstan. The system, in which the M-40 computer was responsible for calculating the trajectory of the anti-missile, was able to intercept the R-12 ballistic missile. The interception was carried out 60 kilometers from the launch site of the anti-missile. According to the data of the recording equipment, the missile missile miss was 31,8 meters to the left and 2,2 meters in height with an allowable radius of destruction of 75 meters. The fragmentation charge of the V-1000 anti-missile successfully destroyed the R-12 warhead, which contained a weight simulator of a nuclear charge.

Speaking about the technical aspects of the military computer M-40, it can be noted that it was created on a mixed element base, in which both vacuum tubes and ferrites, and semiconductor transistors and diodes were used. At the same time, the speed of the machine increased to 40 thousand operations per second with a fixed point, which was about 4 times higher than the peak values ​​for BESM-1. The first full-fledged military computer received random access memory on ferrite cores with a total capacity of 4096 40-bit words. The external memory was a magnetic drum with a capacity of 6 thousand words. The military computer M-40 worked in conjunction with the equipment of the processor for exchange with the system subscribers and the equipment for keeping time.

For the creation and successful testing of the complex, the brain of which was the M-40 and M-50 computers, the team of leading developers of the M-40 computer was awarded the prestigious Lenin Prize. It was received by Sergey Lebedev and Vladislav Burtsev.

Ctrl Enter
Noticed oshЫbku Highlight text and press. Ctrl + Enter
We are
Myths of the United States. The backwardness of the Soviet computer technologyHow to pull the rubber, or the history of the creation of synthetic rubber
46 comments
Information
Dear reader, to leave comments on the publication, you must to register.