Cahul. How Rumyantsev destroyed the army of the Ottoman Empire 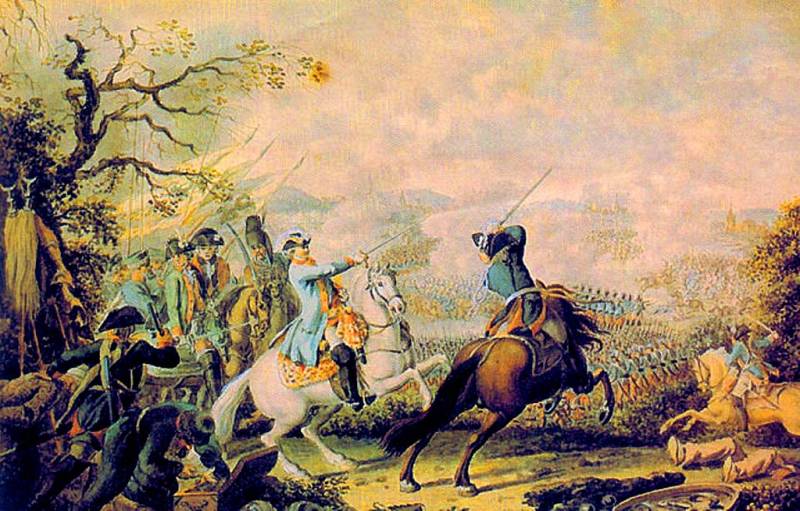 250 years ago, the Russian commander Rumyantsev defeated the six times superior Turkish army on the Cahul River. Russia returned the left bank of the Danube.

Victory on Larga ("Battle of Larga") brought the Russian army under the command of Peter Rumyantsev closer to solving the main task of the 1770 campaign - the destruction of enemy manpower and gaining control over the Danube estuary, the territory along the Prut and Dniester, Moldavia and Wallachia. The relatively small Russian army (about 30 thousand people: over 23 thousand infantry, about 3,5 thousand cavalry and about 3 thousand Cossacks; about 250 guns) were opposed by two enemy armies. The Ottoman army under the command of Grand Vizier Iwazzade Khalil Pasha: about 150 thousand people (100 thousand cavalry and 50 thousand infantry), over 200 cannons. It was located at Isakchi's. All the famous generals of the Ottoman Empire were with the army. And the second army - the troops of the Crimean Khan Kaplan-Girey: 80-100 thousand horsemen. After the defeat at Larga, the Crimean Khan retreated to the Danube. There the army was divided. The Tatar cavalry withdrew towards Ishmael and Kiliya, where their camp and families were. The Turkish corps on the left bank of the Cahul River went to join the Grand Vizier. The pogrom on Larga greatly disturbed the Ottoman command. However, the Turks were confident in their superiority, they knew that Rumyantsev had few people. Also, the Tatars announced that the enemy was experiencing supply problems. Therefore, the grand vizier decided to cross the Danube and attack the Russians.

On July 14, 1770, Ottoman troops crossed the Danube. Some military leaders suggested setting up camp and meeting the "infidels" at the Danube. The Grand Vizier decided to advance. He was confident in the superiority of his army. In addition, the Crimean Khan promised to support the offensive, intercept enemy communications and strike from the rear. The Crimean cavalry was located on the left side of Lake Yalpug (Yalpukh), intending to cross the river. Salchu (flows into the Yalpug river) to attack the Russian carts. On July 16, Khalil Pasha's army joined up with the corps in Cahul.

Rumyantsev at that time was solving two main tasks: to avoid a battle with two enemy armies at once and to cover communications. In order to prevent the Turks and Tatars from uniting, Rumyantsev's army crossed Cahul on July 17 and camped near the village of Grecheni. To protect the army stores (supplies) and the safe movement of the convoys that followed from Falchi with a 10-day supply of provisions, the Russian commander sent a detachment of General Glebov (4 grenadier battalions, part of the cavalry). Rumyantsev also ordered Potemkin and Gudovich's detachments to move to the Yalpug River, covering the main forces from this direction. Troop transports going to the r. Salche, instructed to go to the Cahul River. As a result, the main forces of the Russian army, which could participate in the battle with the troops of the vizier, were reduced to 17 thousand infantry and several thousand regular and irregular cavalry.

Rumyantsev wanted to attack the enemy immediately, but was waiting for the arrival of the convoy in order to increase the army's reserves. Therefore, he ordered to speed up the movement of transports, sent regimental carts to meet and increased the number of drivers and armed them. The Russian army was in danger. Provisions left for 2-4 days. A powerful enemy army stood in front, on the flanks were the large lakes Kagul and Yalpug. In case of failure, the Russian troops found themselves in a critical situation: rivers and lakes hindered free movement, much superior to the enemy's forces (the combined Turkish-Tatar forces had 10 times more soldiers) could attack from the front and rear. It was impossible to escape from the enemy's numerous cavalry. It was also impossible to hold a long defense in a fortified camp and wait for reinforcements in the absence of food. Rumyantsev could retreat to Falcha, secure supplies and choose a strong position. However, he chose an offensive strategy. As Petr Aleksandrovich noted, "do not endure the presence of the enemy without attacking him."

On July 20, 1770, the Turkish army headed for the village of Grecheni. The Ottomans stopped 2 versts from the Troyan Wall (fortification of the times of Ancient Rome). The Ottoman fortified camp was located east of the village of Vulcanesti, at heights on the left bank of the river. Cahul. From the west, the Turkish camp was covered by a river, from the east - a large hollow, from the front - the remains of the Troyanov shaft. The Turks also prepared field fortifications - retrenchment, installed batteries. The Turkish troops were crowded together. The Ottomans noticed that the Russians were standing still and decided that the enemy was afraid of the battle. On July 21, Khalil Pasha decided to attack: to imitate the main blow in the center, to throw the main forces on the left wing in order to overturn the Russians in Cahul. At the same time, Kaplan-Girey was supposed to force Salch and strike at the rear of the enemy.

The Russian commander decided to strike at the Turks before the appearance of the Tatar cavalry in the rear. On the night of July 21 (August 1), 1770, Russian troops reached Troyanov Val. At dawn, three Russian divisions crossed the rampart and formed a line of five separate squares. The cavalry was positioned in the intervals between the square and behind them, in the center was artillery. Each square had its own mission and direction of attack. The main blow to the left wing of Khalil Pasha was delivered by the Baur corps (jaeger and 7 grenadier battalions, two hussar and carabiner regiments, over 1 Cossacks) and Plemyannikov's 2nd division (grenadier and 4 musketeer regiments). The main artillery forces were concentrated here - about 100 guns. The 1st division Olytsa (2 grenadier and 6 musketeer regiments) was advancing from the front. Rumyantsev himself was with Olytsa's square and had as a reserve the cavalry of Saltykov and Dolgorukov (cuirassiers and carabinieri - about 3,5 thousand sabers), Melissino's artillery. That is, two-thirds of the forces of the Russian army were concentrated here. Bruce's 3rd division (2 grenadier battalions, 4 musketeer regiments) attacked the enemy's right wing; Repnin's corps (3 grenadier battalions, 3 musketeer regiments, 1,5 thousand Cossacks) covered the right flank and had to go to the rear of the enemy.

Having discovered the offensive of the "infidels", the Turks opened artillery fire, then their numerous cavalry (mostly light) attacked the center and the left flank of the enemy. Russian squares stopped and opened rifle and artillery fire. Melissino's artillery fire was especially effective. After the failure in the center, the Ottomans increased the pressure on the right flank, attacking the columns of General Bruce and Prince Repnin. Taking advantage of the area (hollow), they surrounded the Russian squares from all sides. Part of the Turkish cavalry crossed the Troyanov shaft and went into the rear of the Olytsa division. The Turks sat down along and opened rifle fire on the troops of General Olitsa.

Meanwhile, the Russian commander dispatched reserves to occupy the ravine and cut off the leading Turkish forces from the fortifications and camp. The Turks, fearing the encirclement, fled to the retrenchment. In doing so, they came under canister fire. The rest of the Ottoman cavalry, attacking on the left and right flanks, also rolled back. On the Russian right flank, Baur's troops not only repulsed the enemy's onslaught, but counterattacked, took a 25-gun battery by storm, and then a retrenchment with 93 guns.

After repelling the enemy attack along the entire front, at 8 o'clock the Russian army launched an offensive on the main fortifications of the Turkish camp. The troops of Baur, Plemyannikov and Saltykov, with the support of artillery, defeated the enemy's left flank. At this time, squares of Olytsa, Bruce and Repnin made a round of the right flank. When attacking an enemy camp 10-thous. The Janissary corps fiercely attacked Plemyannikov's square and crushed his ranks. There was a threat to Olitsa's punishment and the failure of the entire operation. Rumyantsev was able to rectify the situation with the help of the reserve. Baur and Bruce's square entered the battle. Then all squares went on the offensive. Repnin's troops reached a height south of the Turkish camp and opened fire. The Turks could not withstand the attack at the same time, panicked and fled. The army of the Crimean Khan did not dare to join the battle and retreated to Ackerman.

During the battle, Russian losses amounted to over 900 people. The losses of the Turkish army - according to various estimates, from 12 to 20 thousand people killed, drowned, wounded and captured. During the stampede and crossing the Danube, many people died. 56 banners and almost all of the enemy's artillery were captured.

In the Battle of Cahul, the Russian army showed a high level of military skill and fighting spirit. This made it possible to crush the significantly superior forces of the Turks with smaller forces. Rumyantsev concentrated his forces (including artillery) in the main direction, used a dismembered battle formation in the form of divisional squares, which interacted well with each other, artillery and cavalry.

The fatigue of the soldiers, who had been on their feet since the night, did not allow immediately organizing the pursuit of the enemy. After resting, the pursuit of the Turks continued. The Baur corps was sent in pursuit. On July 23 (August 3), Russian troops overtook the enemy at the crossing of the Danube at Kartal. The Ottomans still had a complete superiority in forces, but they were demoralized, disorder reigned in their ranks, they could not organize a defense and a quick crossing. Baur correctly assessed the situation and led the troops into the attack. The Ottomans were defeated again. The Russians captured the entire convoy, the remaining artillery (30 guns) and about 1 prisoners.

The Turkish army was unable to quickly recover from the crushing defeat. Now the Ottomans limited themselves to defense in fortresses. Rumyantsev used victory in a decisive battle to gain a foothold on the Danube. A detachment from Igelstrom was sent to persecute the Crimean Tatars. Repnin's corps, reinforced by Potemkin's detachment, headed towards Izmail. On July 26 (August 6), they took Ishmael and moved on, occupying enemy fortresses on the Lower Danube. In August, Repin took the important fortress of Kiliya, which covered the mouth of the Danube. In September Igelstrom took Ackerman, in November a detachment of General Glebov captured Brailov, and Gudovich entered Bucharest. As a result, the victorious Russian army settled down to winter in Moldavia and Wallachia. 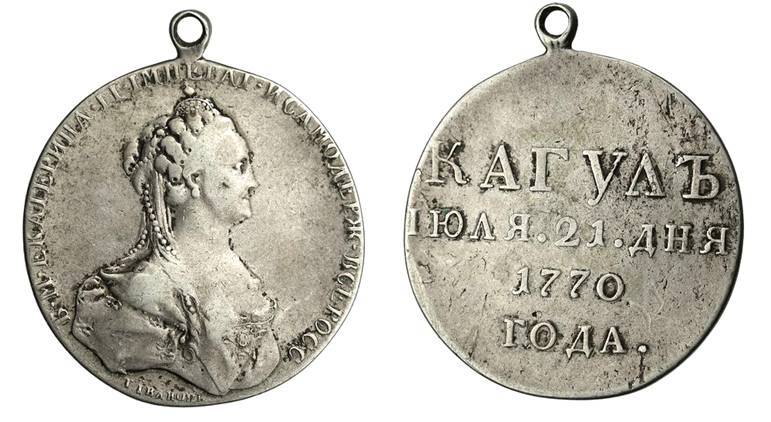 In memory of the battle, a medal "For the victory at Cahul" was minted. More than 18 thousand soldiers and non-commissioned officers were awarded her

Ctrl Enter
Noticed oshЫbku Highlight text and press. Ctrl + Enter
We are
The defeat of the Turkish army at KagulBrilliant victories of the Russian army under the leadership of P. A. Rumyantsev over the Turkish-Tatar troops: the battles at Ryaba Mohyla and Larga
Military Reviewin Yandex News
Military Reviewin Google News
16 comments
Information
Dear reader, to leave comments on the publication, you must to register.