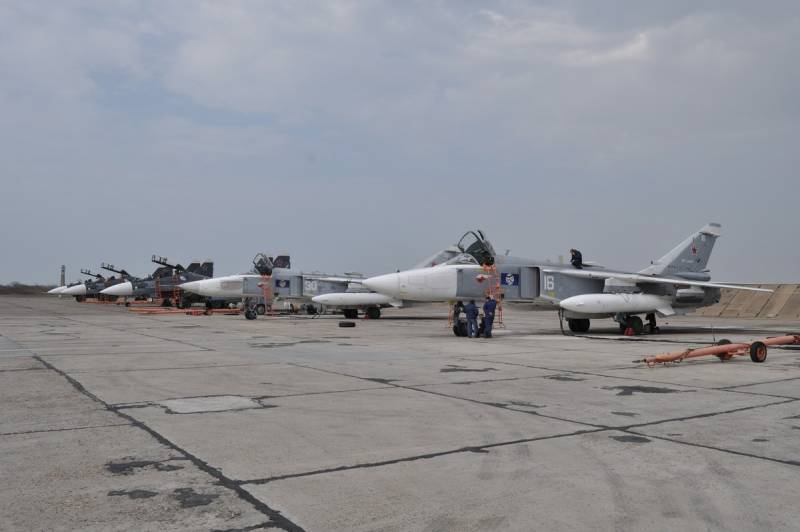 Several years ago, the aerospace forces began widespread adoption aviation specialized computing subsystem SVP-24 "Gefest". Soon, all its advantages were shown during the Syrian operation. Now such equipment is received by aircraft of the naval aviation. This year the pilots from the Black Sea were the first to start mastering the modernized equipment.

The first reports of work on the implementation of the Hephaestus subsystem in naval aviation appeared in 2017. Then it was said about the re-equipment of Su-33 carrier-based fighters using the SVP-24-33 equipment. It was also noted at that time that in the near future, "land" front-line bombers Su-24M will receive similar devices.

At the beginning of 2018, the chief of aviation of the Navy, Major General Igor Kozhin, in an interview with Krasnaya Zvezda, said that the modernization of the Su-24M and Su-33 aircraft with the help of Hephaestus had significantly increased their ability to defeat ground targets. However, at that time, there was no information about the re-equipment of the naval Su-24M.

The situation with the SVP-24 for naval aviation has become clear only now. On July 13, Major General Kozhin spoke about the Navy's plans to develop air groupings. Among other things, he noted that the flight personnel of the Black Sea Fleet had successfully mastered the new sighting systems installed on their aircraft. At the same time, no specific types of equipment, equipment or military units were named.

On July 20, Izvestia, citing its sources in the Defense Ministry, disclosed details of the current rearmament. According to them, we are talking about the modernization of Su-24M bombers using the SVP-24 subsystem. This technique belongs to the 43rd Separate Naval Assault Sevastopol Aviation Regiment, based in the Crimea. Modernization work was completed at the beginning of the year, and then the pilots began to master the new equipment. 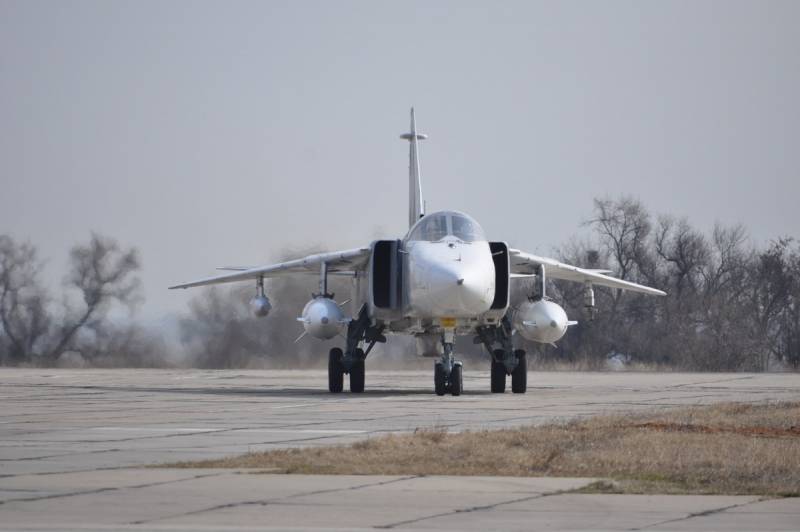 Not only Black Sea

At present, the 43rd Omshap is the only part of the naval aviation that has Su-24M aircraft with Hephaestus. In the near future, the regiment will have to test the upgraded equipment as part of a major exercise. In September, the Black Sea pilots will take part in the Kavkaz-2020 maneuvers, and the Su-24M will not be left without work.

It is reported about preparations for the modernization of the equipment of two more fleets - the Baltic and the Northern. As part of the Baltic Fleet's naval aviation, Su-24M aircraft serve in the 4th separate Guards Marine Attack Aviation Regiment, recreated in 2017. Together with them, the regiment operates modern Su-30SM fighters delivered in recent years.

Also, the bombers of the 98th Separate Guards Mixed Aviation Regiment of the 45th Army of the Air Force and Air Defense of the Northern Fleet will be upgraded. This regiment has two squadrons on Su-24M bombers and Su-24MR reconnaissance aircraft. Their modernization will also lead to understandable consequences.

According to The Military Balance 2020, 41 Su-24M bomber and 12 Su-24MR reconnaissance aircraft serve in the naval aviation of the Russian Navy. Taking into account the achieved successes in the re-equipment and modernization of the Aerospace Forces aircraft, it can be assumed that in the coming years a complete renewal of the fleet of naval Su-24M / Rs will be carried out with all the desired capabilities.

"Hephaestus" over the sea

Like the Air Force / Aerospace Forces several years earlier, the naval aviation is making the transition to modern on-board equipment that increases the combat qualities of equipment. So far, she lags behind her "land" colleagues, but the situation is gradually changing for the better. 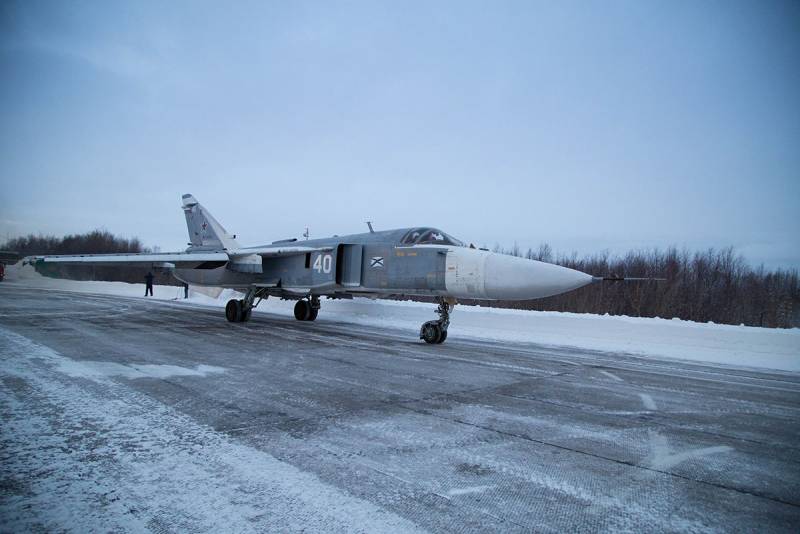 Su-24M at the Northern Fleet naval aviation exercise, January 2020
According to known data, to date, the SVP-24 Hephaestus subsystem has received a number of Su-33 carrier-based fighters. Last year it was reported about the beginning of modernization of Tu-142M patrol aircraft, also providing for the installation of Hephaestus. The first of the updated Su-24Ms returned to service a few months ago. Of all the compatible types, only the Su-25UTG has not yet received such equipment - however, the decision to start modernization (or abandon it) can be made at any time.

The exact number of modernized "naval" aircraft has not yet been announced. At the same time, the technical features of the SVP-24 and the capabilities of the Navy make it possible for several years to update all available compatible aircraft in the amount of several dozen.

The specialized computing subsystem "Hephaestus" is designed to improve the efficiency of the use of unguided air-to-surface weapons. Devices from its composition receive data from a number of sensors and devices, generate data for use weapons and provide dumping / firing at the optimum time. Due to this, bombs or rockets show the highest possible accuracy.

SVP-24 is designed as a set of products for installation on an existing aircraft. No major overhaul of technology is required. The installation of equipment can be carried out both at a repair plant simultaneously with the restoration of equipment, and in the conditions of a technical part. In the latter case, all procedures take only a few days.

When used on the Su-24M, the SVP-24 subsystem increases the accuracy of the ASP application up to three times. Such capabilities have been repeatedly confirmed in the conditions of landfills, and then were tested in Syria. "Hephaestus" in practice made it possible to solve the same combat missions faster and with less expenditure of weapons, and relatively cheap unguided. 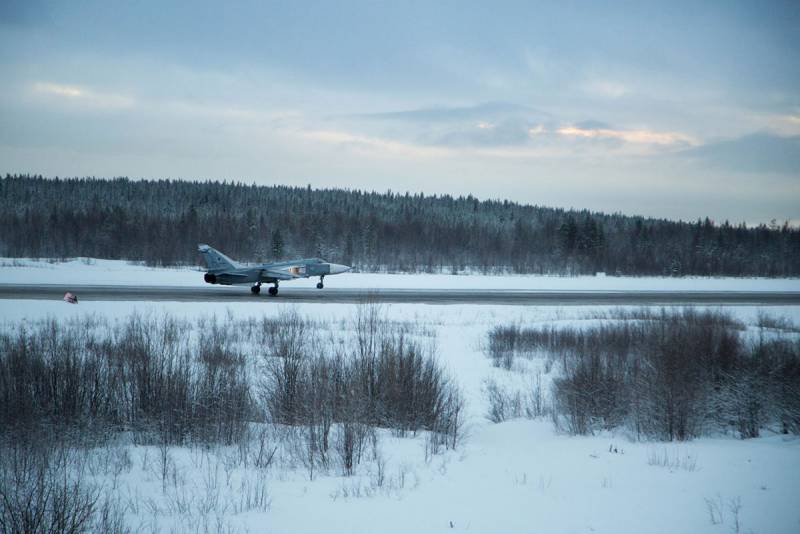 The tasks of naval aviation include the defeat of various surface or ground targets using the entire available range of ASPs. Thus, the Su-24M bombers must use guided and unguided missiles and bombs against coastal structures, equipment, ships and watercraft. Some of these tasks are effectively solved by unguided weapons, and "Hephaestus" increases the likelihood of defeat with minimal consumption.

Su-33 fighters are also capable of attacking coastal or surface targets. In their case, the SVP-24 fully justifies itself. Of greatest interest is the installation of Hephaestus on Tu-142M anti-submarine aircraft. The operation of such machines is also associated with the discharge of the payload, however, in their case, these are radio hydrobucks, explosive sound sources and anti-submarine bombs or mines. The high accuracy of dropping buoys or bombs is of great importance for the effective solution of combat missions - and the use of SVP-24 is also fully justified.

Recent ones news on the modernization of the Su-24M from the Black Sea Fleet and the expected renewal of the equipment of other fleets are fully consistent with the general strategy for the development of combat aviation of the Russian armed forces. In the interests of the Aerospace Forces and the Navy, purchases and deliveries of completely new aircraft of modern models are carried out, and in parallel, the existing equipment is being modernized.

In terms of the timing and pace of rearmament and modernization, naval aviation is still inferior to the VKS. In particular, the introduction of Hephaestus began with a delay of several years, and so far we are talking only about one regiment. However, the necessary processes are up and running. In the foreseeable future, the naval aviation of the Navy will be armed with several samples of aviation equipment for various purposes, but with similar capabilities for using air-to-surface weapons.