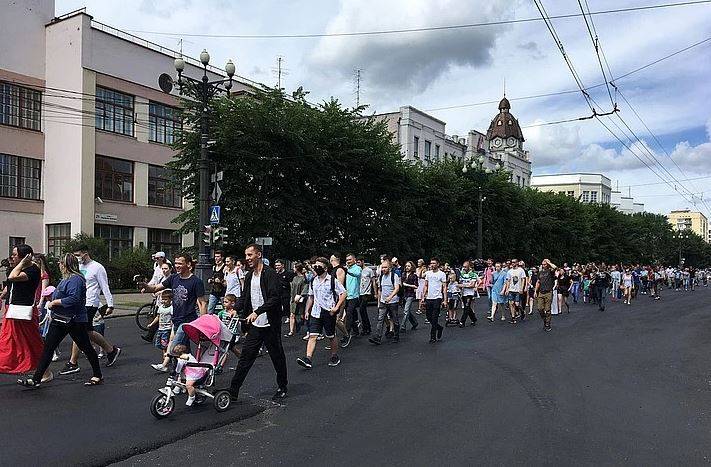 The protests in Khabarovsk, which have been going on for a week, could not but have reacted to local residents, central and local authorities, political parties and groups, and attempts to support in other regions.

The spontaneity of protests and their focus

The past time has shown that the protests were indeed spontaneous. At the initial stage, most likely, people from the governor's team launched this process, but, frightened by such a mass scale, they went into the shadows and try not to show themselves in any way. Feeling the support of the population, activists entered the arena, calling on people to come out to protests and launching simple symbols and posters.

The mass character is no longer the same as in the first days, but, nevertheless, sufficient to support the process that has begun. There is no doubt that in form it is, of course, a popular protest, no matter how they now shout about its custom-made nature. The population for the most part supports him, even if they do not even take to the streets. The protesters organized themselves, did not follow the lead of the extremists and provocateurs, suppress their actions themselves, do not support the slogans they put forward and do not allow rallies and protests according to their scenario. The provocateurs sent in from different parts of the country were rebuffed, and their activity was significantly reduced.

The protests are aimed, as it were, in the direction of resolving issues of regional importance, but they raise basic problems that require the central authorities to take measures to resolve them. The people were united by an excuse - the arrest of the governor, whom they had elected in a competitive struggle with Moscow's protege Shport, and his removal was perceived as ignoring their desire to have the power for which they voted. Under the pretext of supporting Furgal, they indirectly showed their disagreement with the policy of the central authorities, which disregard their opinion and pursue a policy not to meet the needs of the population, but to encourage the undivided rule of the ruling class. At the same time, the protesters do not raise questions about the country's disintegration or some kind of separatism, they just want normal conditions for their life.

The population has something to present to the authorities; in the same Khabarovsk Territory, two previous governors, Ishaev and Shport, being Moscow's henchmen, showed themselves far from the best and stained themselves in corruption. Ishaev, who was also the plenipotentiary in the Far Eastern Federal District, is still under investigation on corruption charges.

Furgal came to power contrary to the canons of the established political system, positioning himself as a man of the people. Quite objective information about him was given in an interview by one of the deputies of the regional legislative assembly. He confirmed that Furgal was very popular in the region, the governor's team competently represented him as a fighter for the interests of the region and the population. By his populist actions, such as cutting salaries for himself and regional officials, he gained prestige, as if defending the interests of the population from the arbitrariness of local and Moscow officials. At the same time, he did not have any serious successes as governor, because of his populist actions, the region's debt grew by tens of billions of rubles. According to the deputy, the protests are a reason to show the center that the choice of the region must be taken into account and the population is ready to seriously defend their interests.

It should be noted that the local and Far Eastern authorities have shown their helplessness and lack of understanding of the ongoing processes. Plenipotentiary Trutnev and the mayor of Khabarovsk Kravchuk showed a purely bureaucratic approach, which angered the townspeople. The mayor thought of accusing the protesters of participating in rallies for money, and an attempt to apologize only made the situation worse. We can confidently say that his political career ended there. Local officials, by their attitude and actions, have shown the inconsistency of their presence in these posts, unfortunately, this has become the norm for many regions, and the people see it well.

The reaction of political forces

Attempts to straddle the events in Khabarovsk were also made by representatives of the comprador liberal community. They joyfully inflated the scale of what was happening and unsuccessfully tried to integrate into this movement, but were rejected, because with their provocative appeals they were out of place there. Nevertheless, on the Web, they shouted that Khabarovsk had rebelled against the Kremlin, and called on other regions to follow this example, even promoted on the Web an excuse for rallies - “to feed the pigeons”. Full-time liberal propagandist Valery Solovey trilled in a series of videos that Russia had rebelled against Putin, presenting it as a "popular protest" against voting on amendments to the Constitution, and threatened that the current government would end in the fall. Only Vladivostok responded, only a few hundred protesters came out, and in form it was very reminiscent of a typical order. On a national scale, the calls of the liberals did not find support, these corrupt provocateurs have long been seen through and know their worth.

The rally of liberals in support of Furgal in Moscow looked parody and caricature. On Pushkinskaya Square, about a hundred paid "protesters" were gathered, and two trained young men of 18-20 years old and a young blonde repeated with memorized phrases about the support of Furgal and, as it were, inadvertently called everyone to go to Tverskaya and block it. Several women from the "city madmen" were circling around them, always ready to hold a meeting for anything and as if representing Muscovites who disagreed with the policy of the authorities. The provocation did not work, but in the evening they clashed with the police and, having filmed it, threw it into the Internet, telling everyone how the police are atrocities in Moscow and crack down on “peaceful Muscovites” who supported Furgal.

The pseudo-positional Communist Party of the Russian Federation also woke up, announced its disagreement with the authorities and held its rally in Khabarovsk on July 18. It is difficult to imagine a more anecdotal situation: several dozen party members came to the “grandiose” rally (the Communist Party announced 50 present), although there were significantly fewer in the video. Such rallies clearly show how popular this party is among the population.

Since the beginning of the protests, Zhirinovsky's party has continued to sit deep underground, remain silent, do not show itself in any way and does not even try to protect its party member Furgal.

All this suggests that attempts by various political forces to take control of the protests that had begun were unsuccessful. They passed and are passing spontaneously, there is no obvious headquarters there yet, and if there was one, they would probably already be interested in them.

The central authorities in Moscow are behaving in a rather interesting manner, no official statements are made, as if nothing is happening in Khabarovsk. There is not a word about the protests on federal TV channels, but every day there are stories about how Furgal is a pathological killer and the head of an organized criminal group. All the time they show the unfortunate mother of one of the murdered and denouncing comments of representatives of the Investigative Committee, while no evidence of his guilt is provided, only emotions against the accused.

Apparently, the authorities are still assessing what happened and are not taking any concrete steps. It is clear that they are not going to meet the residents of the region and bend their own line: Furgal is a murderer and should be in prison. He, of course, is not an angel, but the matter is no longer in the governor, the whole country is watching this confrontation of the rebellious population of the region. How will it end? The outcome will largely determine the process of the reforms announced by the President.

Unfortunately, no attempts are made to calm down the population, show respect for people, find a common language and extinguish the conflict. Such an ostrich policy will not lead to anything good, the problem will not go away by itself, it will have to be solved anyway. Apparently, they staked on the fact that people would rally, get tired and calm down. If no one leads the protests, so it will happen, a spontaneous popular revolt always ends in nothing.

Of course, protests can intercept political forces capable of directing them in the direction they need, but there are no such forces today. This does not mean that they will not appear in the future. With the unification of forces striving for real transformations in the country and putting forward slogans supported by the majority of the population, there will always be reasons for protests in any region. Discontent on any occasion can suddenly spill out on such a scale that it will be impossible to extinguish it, and a domino effect will begin. The central government should take into account this development of the situation and look for ways of real, and not declared, transformations that society has long awaited.

Ctrl Enter
Noticed oshЫbku Highlight text and press. Ctrl + Enter
We are
Situational analysis of the death of the MH17 flight (Malaysian Boeing 777), made on the basis of engineering analysis from 15.08.2014Syria: Americans scare themselves, and Asma Asad buys chairs
Military Reviewin Yandex News
Military Reviewin Google News
212 comments
Information
Dear reader, to leave comments on the publication, you must to register.