The defeat of the Turkish fleet in the Battle of Kerch 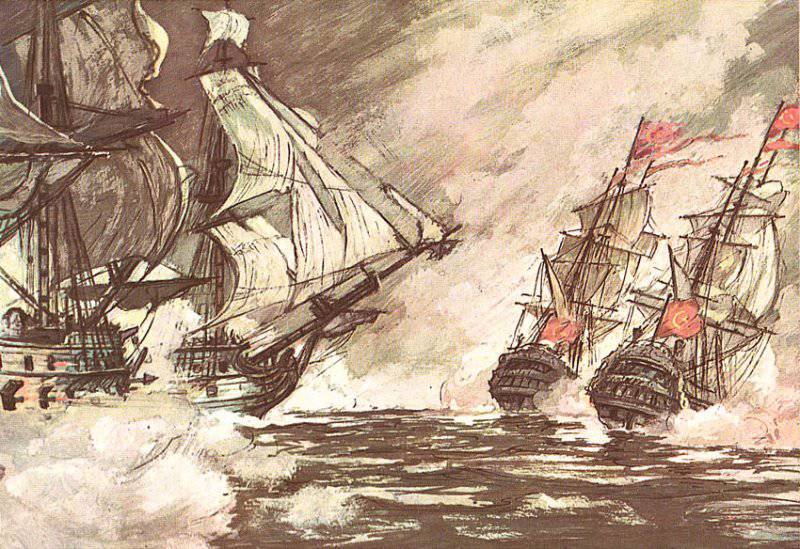 230 years ago, the Black Sea Fleet under the command of Ushakov defeated the Turkish Navy near the Kerch Strait. Russian victory fleet thwarted the plans of the Ottoman command to land troops in the Crimea.

Creation of the Black Sea Fleet

In 1783, a detachment of the Azov flotilla of Vice Admiral Klokachev in the southwestern part of the Crimean peninsula founded the port of Akhtiarsky. In 1784 it was renamed Sevastopol (from the Greek "City of Glory"). From this time begins история Of the Black Sea Fleet. First, it included the ships of the Azov flotilla, then new ships began to come from the shipyards of Kherson. The new port was founded in 1778 near the mouth of the Dnieper and became the main shipbuilding center in the south of the Russian Empire. In 1874, the first battleship was launched in Kherson, and the Black Sea Admiralty was also created here.

The task was extremely difficult. The northern Black Sea region has practically just returned to Russia. Its development proceeded at a rapid pace, but literally from scratch. New towns and villages, ports and shipyards, enterprises and roads were built. There was a large-scale resettlement of the people to the south, the development of fertile lands. The former "Wild Field" literally before our eyes turned into a prosperous land. To create the nucleus of the Black Sea Fleet, the Russian government was going to transfer the squadron from the Baltic. Six frigates passed around Europe, reached the Dardanelles, but Porta refused to let them into the Black Sea. The negotiations went on for a year, but without success. Constantinople hoped to take revenge in the Black Sea region, to return the lost territories, including the Crimea. Therefore, Russian ships from the Baltic to the Crimea were not allowed.

The warlike attitude of Turkey was supported by the great Western powers - France and England. The West wanted to return Russia to the past, when the country had no access to the Azov and Black Seas. In August 1778, the Turks demanded the return of the Crimea and the revision of the previously concluded agreements between St. Petersburg and Istanbul. The Russian ambassador Bulgakov rejected the impudent claims and was arrested. It was a declaration of war. The Turkish fleet under the command of Gassan Pasha (Hussein Pasha) headed for the Dnieper-Bug estuary.

Russia was not ready for a war on the Black Sea. The fleet and its infrastructure have just begun to be created. There was not enough experienced personnel, ships, weapons, materials, supplies, etc. The sea was poorly studied. The Turks had complete superiority. At the beginning of the war, Russia had only 4 battleships on the Black Sea, the Ottomans had about 20. Also, the Russian fleet was divided into two parts: the ship fleet was stationed in Sevastopol, the rowing flotilla with a part of sailing ships was in the Dnieper-Bug estuary. In order to somehow strengthen the Liman flotilla, the "armada" of Catherine II, on which she traveled from St. Petersburg in 1787, was converted into combat ships.

The Turkish command planned to seize the area of ​​the Dnieper-Bug estuary and break further into the Crimea. In October 1787, the Turkish fleet landed troops in the Kinburn area, but the Russian detachment under the command of Suvorov destroyed the enemy. In the spring of 1788, the Turks resumed their offensive. At the entrance to the estuary, a fleet of 100 ships and vessels with 2200 guns was concentrated. The Russian flotilla had here several sailing ships and about 50 rowing ships, about 460 guns. In June, the Russians inflicted a heavy defeat on the enemy in the Battle of Ochakov ("The defeat of the Turkish fleet in the battle of Ochakovo"). In July, near the island of Fidonisi, the Sevastopol squadron of Admiral Voinovich (de facto the battle was led by the captain of the brigadier rank Ushakov) forced the superior forces of the Turkish fleet to retreat ("Battle of Fidonisi"). Soon after this battle, the decisive naval commander Fyodor Fedorovich Ushakov was appointed chief of the Sevastopol squadron, and then commander of the Black Sea Fleet.

Thus, the battles at Ochakov and Fidonisi showed that Turkey had lost its superiority at sea. Russian ships began to make trips to the enemy shores. So, in September 1788 Senyavin's detachment reached Sinop and fired at the enemy fortifications. The Ottoman fleet left the Ochakov area, and in December the Russian army took the strategic fortress, taking control of the entire Dnieper-Bug estuary. In 1789, Russian troops under the command of Suvorov defeated the Turks at Foksani and at Rymnik. In the same year Nikolaev was founded, which became a new center of shipbuilding. Russian troops took Khadzhibey, where they began to build a port (Odessa).

The Turkish command believed that the offensive of the Russian army on the Danube front would weaken the defense of the coast. Therefore, the Ottomans decided to land troops on the coast, primarily in the Crimea. With the success of the operation, Russian forces were diverted from the main theater. Such an operation was dangerous for the Russian army, since its forces were small. From Sinop and Samsun and other ports of Turkey there were two days of travel, from Anapa to Kerch and Feodosia, only a few hours of travel for Turkish ships. Therefore, in Sevastopol and Kherson, they took this threat seriously.

In the spring of 1790, the Turks were preparing the fleet for the campaign. The Russian commander decided to march to the enemy's shores. The Sevastopol squadron went to sea with the aim of reconnaissance and disruption of enemy communications. Ushakov's ships approached Sinop, then moved along the coast to Samsun, then to Anapa and returned to Sevastopol. The Russians captured several Turkish ships and found out that intensive training of the fleet with amphibious forces was being conducted in Constantinople. At the end of June 1790, the main forces of the Turkish fleet left Constantinople under the command of Hussein Pasha - 10 battleships, 8 frigates (about 1100 guns) and 36 ships with a landing party. The Turkish fleet moved towards the Anapa fortress, where it took on board the infantry. On July 2 (13), the Sevastopol squadron of Ushakov - 10 ships and 6 frigates (about 830 guns), 16 auxiliary ships, again left the base.

On the morning of July 8 (19), 1790, Ushakov's squadron was located opposite the Yenikalsky (Kerch) Strait, between the Crimea and Taman. The enemy was soon discovered. Turkish ships went from Anapa to the Crimean Peninsula. Both squadrons had an equal number of battleships, but the Turks had the advantage. Firstly, the ships "St. George", "John the Theologian", "Alexander Nevsky", "Peter the Apostle" and "Apostle Andrew" were armed with 46-50 guns, that is, they were actually frigates. At the direction of the Russian commander-in-chief Potemkin, they were listed as battleships, later, as new 66-80 cannon ships were built, they were returned to the frigate class. Only 66 ships had 80-5 guns: "Mary Magdalene", "Transfiguration", "Vladimir", "Pavel" and "Nativity of Christ" (flagship, the only 80-gun ship). Therefore, the Russian fleet was inferior to the enemy in artillery armament. Secondly, the Turks had numerous crews and troops, that is, they could go on boarding. Also, the Ottoman ships occupied an upwind position, which gave them an advantage in maneuver. 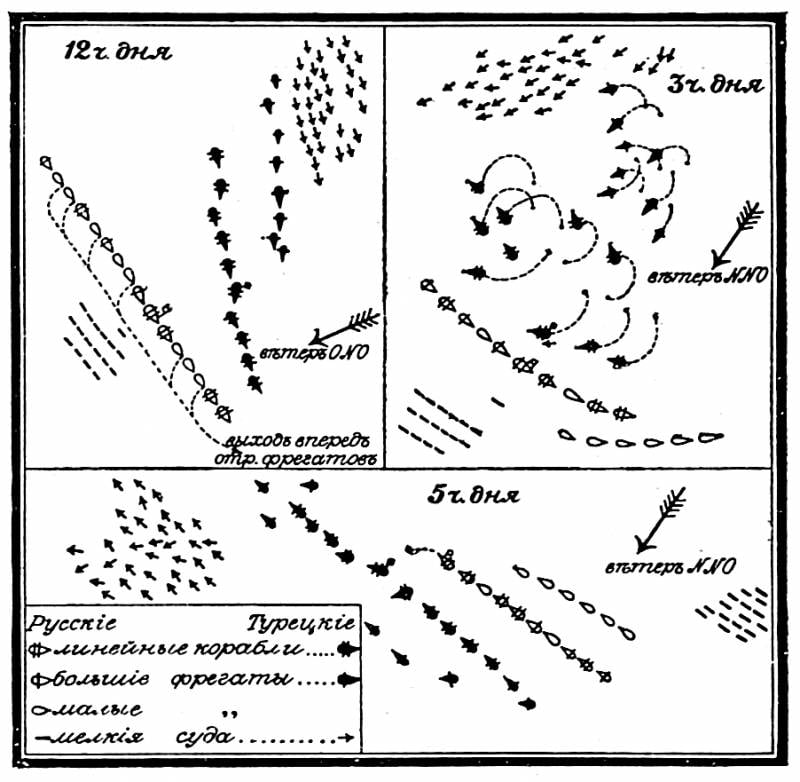 Scheme of the Battle of Kerch. Military encyclopedia of Sytin
Ushakov's ships lined up. Finding the Russians, Hussein Pasha gave the order to attack. At noon, Turkish ships approached the enemy within a shot range and opened fire. The main blow was directed at the Russian avant-garde under the command of the captain of the brigadier rank Golenkin (66-gun ship "Mary Magdalene"). Russian ships returned fire. Seeing that his forward forces could not defeat the Russian vanguard, the Turkish admiral directed fire against him and other ships. Then Ushakov ordered the frigates (they had 40 guns each) to leave the line. Frigates with small-caliber guns could not effectively resist the enemy from such a distance. The frigates "John the Warrior", "St. Jerome ”,“ Intercession of the Virgin ”,“ Ambrose ”and others. Left the battle line, creating a reserve, and the battleships closed the line. The Russian commander wanted the cordebatalia (the middle part of the squadron) to approach the vanguard.

At about 15:2 the wind changed, facilitating the maneuver of the Russian ships. Ushakov's ships approached the enemy at close range and could use all the artillery. They even fired with guns. Russian frigates led by “John” moved forward and supported the vanguard. The Ottomans, in order to improve their position relative to the enemy, began to turn. But this maneuver only worsened the position of Hussein Pasha's ships. At the moment of the turn, the Turks approached the Russian ships, which immediately increased the fire. The gunners of the ships "Rozhdestven Christovo" of captain 2nd rank Yelchaninov and "Transfiguration of the Lord" of captain XNUMXnd rank Sablin did especially well. Two Turkish ships were so badly damaged that they temporarily lost control. To protect his damaged ships, the Turkish commander changed course and went counter-tack parallel to the enemy. As a result, the Ottomans were able to save their damaged ships.

At about 17 o'clock Hussein Pasha ordered the retreat to begin. Taking advantage of the best high-speed qualities of their ships (they were sheathed with copper) and the ensuing darkness, the Turks fled. The most damaged ships went to Sinop, the other part of the squadron to Constantinople. Many Turkish ships were badly damaged, and the enemy suffered heavy damage in personnel. However, the Ottomans tried to hide their defeat, announced the victory and destruction of several Russian ships. The losses in the Russian squadron were about 100 people.

Thus, Ushakov defeated the Turkish fleet and foiled enemy plans for landing in the Crimea. The Black Sea Fleet has strengthened its positions in the region. Constantinople strengthened the defense of the capital, fearing the Russians. Ushakov acted unconventionally in battle, moved away from linear tactics: he broke the line, strengthened the vanguard with the main forces, brought frigates to reserve. That is, the Russian admiral was the first to use the principle of concentration of forces and mutual support. 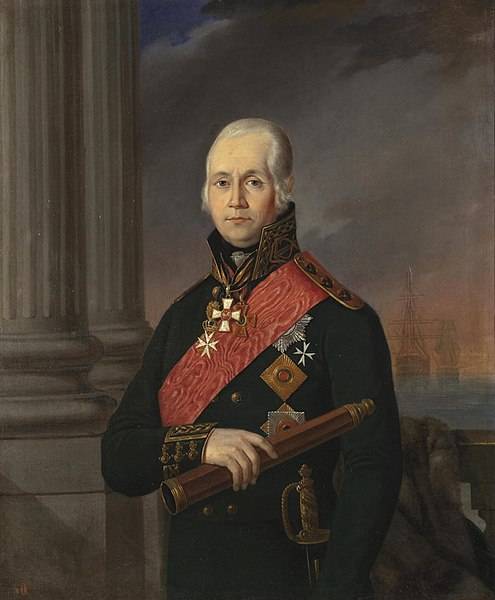