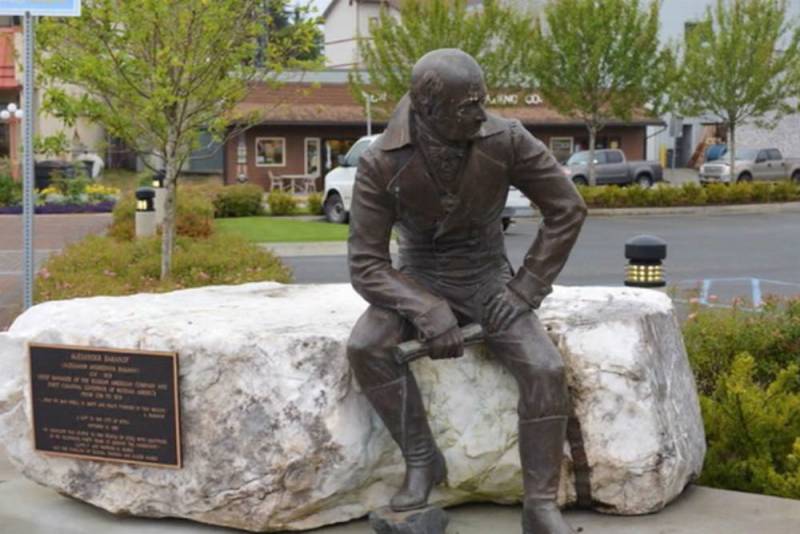 The monument to Baranov was erected in Sitka in 1989 as a symbol of the end of the Cold War.

In Alaska, they decided to remove the monument to the Russian statesman and the ruler of Russian settlements in America, Alexander Baranov. The event takes place against the backdrop of America’s split into Trump supporters and its opponents, Democrats and Republicans, in the wake of the fight against "racism", the confrontation of various socio-political, racial-ethnic groups.

The decision to move the monument

On July 14, 2020, the Council of the City and Sitka County of the US state of Alaska decided to dismantle the statue of Alexander Baranov, the ruler of settlements in Russian America, in the central park. Alexander Andreevich, a native of the Arkhangelsk province, a merchant and industrialist, led the Northeast campaign since 1791. In 1799, it was transformed into the Russian-American Campaign (RAC), he led the campaign until 1818. Baranov founded Fort Michael the Archangel (Novoarkhangelsk) on Sitka Island in 1799, and since 1808 he has been the capital of Russian America. In 1812, at his direction, Fort Ross was built in California.

As a result, thanks to the titanic efforts and tremendous energy of Alexander Baranov, Russian America gained significant development potential, established trade and economic ties with California, Hawaii and China. The Russians conducted significant research in several areas of the Pacific Ocean. Russian America could become an important part of the Russian Empire. Unfortunately, in St. Petersburg these works were not particularly appreciated, everyone looked at Europe.

Local authorities are going to move the monument to Baranov in the Sitka Museum. In a resolution adopted by the Sitka authorities, it was noted that the prominent position of the Baran statue in the center of the crowd causes disagreement in the local community. The monument to the Russian researcher allegedly gives “an incorrect message to residents and visitors of Sitka”, gives “normality” historical a figure involved in “racial separation, violence and injustice”. According to the local council, Alexander Baranov was involved in the enslavement of local Aborigines (Tlingit and Aleuts) in order to use them in the hunt for fur animals until their "complete extermination." And the violence caused by Baranov still hurts the indigenous people of Alaska. Now in Sitka they want to erect a monument to the representative of the indigenous population of Alaska.

At the same time, the petition for the preservation of the monument, drawn up in the Coordinating Council of the organizations of Russian compatriots in the USA (KSORS), received twice as many votes as for its demolition (about 6000 against 3000). The Coordination Council noted that the dismantling of Alexander Andreevich would mean "erasing the Russian historical heritage."

Erasing and blackening of Russian history

It is worth noting that the figure of the Russian explorer and ruler of Russian America has nothing to do with “racism”, “enslavement” and “genocide”. Indeed, between the warlike indigenous people of Alaska and the Russian settlers, military clashes took place. In particular, during the Russo-Tlingit war of 1802-1805. Indians massacred the Russian-Aleutian population of Fort Michael (Sitka). Killed over 200 people. In 1804, the Indians massacred the settlement of Yakutat, killing about 250 people. However, in general, the force was on the side of the Russians, and they won the war. At the same time, other local residents acted on the Russian side: Aleuts, Chugachs. Further skirmishes continued. Both sides suffered losses.

Such conflicts were commonplace in that era. At the same time, the Russians were more likely to differ in a positive way compared, for example, with the Spaniards, British or Americans. There was no total genocide of the Indians, both in the Caribbean, in Central America and in the colonies of the British and French in North America, and then in the USA. Russians, unlike Europeans, always looked at natives as people. There were no racial or religious prejudices. And on the west coast of America, “civilized” Europeans cut or drunk (weapon genocide - alcohol) almost all the great Indian tribes. In the depths of the mainland only the miserable remnants of large Native American peoples survived.

Obviously, the situation in Sitka is caused by the general unrest that swept the United States and spread already to Europe and other regions of the planet. The riots provoked by the death of Negro D. Floyd took on a "color", "anti-racial" (or rather, racial: directed against the "white enslavers") character. One of the methods of the “revolutionaries” is the struggle against the historical past. Pogromists or local authorities, at the suggestion of activists, demolish monuments and signs related to the slave trade, racism, etc.

In particular, in Oregon, even the statue of the founder of the United States, D. Washington, was dumped. In San Francisco - a monument to the founder of the city, the Spanish missionary Junipero Serra, who, through his activities, earned the title of "Apostle" and "Father of California." In the Vatican, the missionary was counted blessed and saints. Some states demolished the monuments to Christopher Columbus. The American Museum of Natural History in New York announced a decision to remove the monument to President Theodore Roosevelt. Dismantle monuments to figures of the Confederation. The question of renaming military bases named after the leaders of the Confederation (although Trump is resisting) is raised. In Alaska, they want to remove not only the statue of Baranov, but also the monument to the famous English explorer James Cook.

In fact, the United States is trying to repeat the “color revolution” that the West had previously launched in the republics of the former USSR, the socialist camps and developing countries. The methods are identical. For example, in the countries of the former Warsaw bloc, in the Baltic states, in Ukraine and in Georgia, decommunization, desovetization and derusification were carried out. Moreover, the process continues. So, in Prague, a monument was removed to the Soviet Marshal Konev - the liberator of the Czech capital.

In the USA, in the wake of the coronavirus epidemic, which sharply worsened the socio-economic situation of the population, there is a tough battle between the elites. Opponents of trump are trying to dump him at all costs. Until the revolution and civil war. All of these processes are superimposed on America’s complex racial, ideological, and economic problems. In the United States, the preconditions for a fierce civil war have developed. The elite is split into globalist cosmopolitans and patriots. Cosmopolitans are ready to arrange "perestroika" for the States. Trump and the patriots are trying to save the American empire.

Thus, as during the Civil War of 1861-1865, between the North and the South there is a split in the elite and a confrontation of economic structures. The first civil war was a conflict between the slave-plantation economy (mainly the agricultural sector and light industry) and the industrial structure, which needed the working hands of all people, including blacks. This is a former US industrial base. "Rusty belt" (or industrial) of the United States. The productive power of America in the face of the white majority ("deep people"). Trump is trying to carry out a new industrialization, return production to the country, make a breakthrough into the future based on neo-industrial ideas. To create an economy of the sixth way: production based on robotics, artificial intelligence, nano-, bio-, information and cognitive technologies (NBIC convergence). This requires a concentration of forces and resources. Hence the departure from obsolete and already hostile to the United States supranational structures like WHO, the UN. Hit the “NATO” so that the countries themselves pay for their defense. Attempts to withdraw military contingents from various regions of the world (Afghanistan, Iraq, Syria, Germany, etc.) in order to save.

Opponents of trump are on the basis of the fifth technological order, the economy of services and post-industrialism. However, the economy of services, a society of rampant consumption, has led to the current systemic crisis and a de facto catastrophe. The petrodollar system, lending interest, rampant dollar emissions, financial “bubbles” on the verge of collapse. They flood the whole world into disaster.

All this created two civil war camps. On the side of Trump is the "deep people" of the United States, whose productive forces created the American empire. His opponents are the electoral base of the Democrats. All minorities, migrants, various social dependents, occupational loafers and unemployed people on social benefits. On the one hand - the urban "bottom", on the other - the cosmopolitan wealthy elite of large cities, accustomed to a consumer society. Those who earn on the financially speculative, non-productive economy, the removal of production outside the United States. These contradictions are so deep that the world cannot solve them. Only the total destruction of the enemy, as during the war of the North and South.

Ctrl Enter
Noticed oshЫbku Highlight text and press. Ctrl + Enter
We are
P.I. Baranov: “I know this is a difficult matter, but our air fleet will be the first in the world”Tsarism was strong
Military Reviewin Yandex News
Military Reviewin Google News
108 comments
Information
Dear reader, to leave comments on the publication, you must to register.