What hide the electronic upgrade and ammunition of the updated MiG-29 Syrian Air Force. Bad news for the Israeli Air Force and Forbes 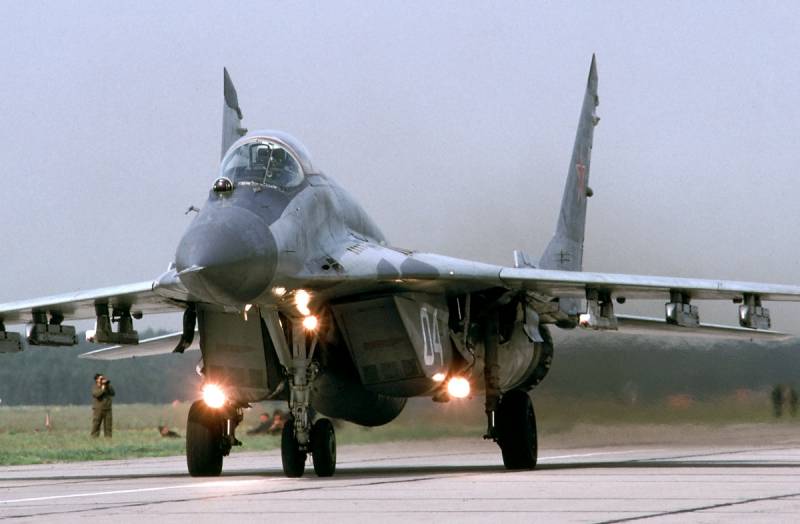 Undoubtedly, the delivery by the Syrian Arab news agency SANA on May 30, 2020 of the delivery to the combat units of the Syrian Air Force of a consignment of deeply improved multi-functional fighters of the MiG-29 family marked a turning point in the development of a promising component of the rapidly aging Syrian Air Force fleet. This is not surprising, because until recently the air force fleet of our key Middle Eastern ally was represented only by a limited number of combat-ready 3rd generation fighter-bombers MiG-23ML / D, fighter-bombers Su-22M3 / 4, front-line bombers Su-24M, equipped with outdated airborne optoelectronic sighting systems, Sapphire-23 airborne radars based on the Cassegrain and Orion-A antennas based on parabolic antenna arrays with extremely low noise immunity of the receiving paths, respectively (in relation to the Su-24 and MiG-23MLD), as well as The "ancient" display equipment of the cockpits, not to mention the lack of modern terminals for the exchange of information on tactical air and surface conditions on the theater of defense through secure radio channels.

And despite the fact that the number of “twenty-nine” packages of military-technical assistance provided to Damascus as part of the “package” of military assistance provided to Damascus, unfortunately, cannot guarantee the Syrian Air Force to confidently maintain air supremacy in probable air battles with dozens of F- multirole fighters The 16C / D Block 50/52 of the Turkish Air Force, as well as the F-16I Sufa Hel Haavir (Israel Air Force), even a pair of units of the upgraded multi-role fighters of the 4+ generation MiG-29SMT or MiG-29M2 are quite capable of effectively patrolling the most problematic and missile-hazardous southwestern air direction of the ATS.

A distinctive feature of this air route is the presence of the mountain ranges of the Anti-Lebanon, which allow the Israeli multifunctional fighters F-16I "Sufa" and F-15I "Ra'am" to almost freely penetrate the Syrian airspace in the terrain bend mode (hiding from the directional patterns of radar detectors 9С18М2 "Dome" and radar illumination of 9S36 military air defense systems "Buk-M2E" of the Syrian air defense forces), and then covertly go to the launching lines of unobtrusive tactical missiles "Delilah-AL" and planning UAB GBU-39 / B for the fortified areas of the Syrian army, strategically important military -industrial facilities and strongholds of the elite Iranian division of the IRGC "Al-Quds".

So, for example, even one flight of four MiG-29SMT / M2, equipped with terminals for the exchange of information on tactical air situation APD-518 of the K-DlAE family in relation to the MiG-29SMT and E502-20 "Turquoise" in relation to the MiG-29M2, respectively ( ensure the receipt of target designation from AWACS A-50U aircraft via secure radio communication channels in the frequency range from 0,96 to 1,215 GHz with further loading of target coordinates into the fighter's weapons control system), as well as advanced weapons control systems SUV-29M / 2 with software and hardware By adapting to the use of highly maneuverable medium-range air combat missiles RVV-AE (R-77), it is quite capable of displacing the link of the Israeli F-16Is that flew to the raid from the "blind" / obscure zones of the Anti-Lebanon. Moreover, the key help for the pilots of the Syrian MiG-29SMT / M2 in a duel battle with Israeli vehicles will be not only the terminals of the asynchronous two-way data exchange line K-DLAE and "Turquoise" for receiving target designation from AWACS aircraft, but also jamming-protected multispectral optical-optical -Navigation systems OEPrNK-29M (OLS-M) and OLS-UEM, capable of detecting infrared radiation from the torches of jet engines "Pratt & Whitney F-100-PW-229" Israeli F-16I at a distance of 65-80 km to the rear hemisphere and 30-35 km - to the front hemisphere.

Meanwhile, in the Western European and American media spaces, information about the arrival of the updated MiG-29 in the Syrian Air Force combat units has traditionally been met by a number of speculations regarding the ability of these vehicles to conduct long-range air battles and mid-range air battles with the Israeli F-16I and inconspicuous F-35I “Adir ", Which have significantly more noise immunity and 1,5-2 times more" farsighted "airborne AFAR radars AN / APG-80 and AN / APG-81, respectively, more advanced airborne defense systems based on high-energy electronic warfare stations SPJ-40" Elisra ”(installed on the F-16I), as well as the anti-jamming systems AN / ASQ-239“ Barracuda ”and the groups of transceiver modules AN / APG-81 of the F-35I fighters adapted for operation in EW mode.

In particular, according to British military expert Justin Bronk, voiced in a brief analytical note for the Forbes publication, even integration into the ammunition of the updated Syrian MiG-29 of the modern R-77 air defense missile system will not allow these vehicles to stop Israeli raids aviation in the position of CAA and its friendly units in the provinces of Damascus, Homs and Tartus, which will be caused by less perfect airborne radars and airborne defense systems of the MiG-29SMT and MiG-29M2 fighters. How objective is this conclusion?

The delivery of the upgraded MiG-29SMT / M2 to the combat units of the Syrian air force may become problem No. 1 for Hel Haavir flight crew

Indeed, the MiG-29SMT and MiG-29M2 multipurpose fighters have far from the most advanced airborne radars N019MP and Zhuk-M based on slot-waveguide antenna arrays that do not have the ability to form radiation pattern gaps in the direction of radiation sources of electronic interference, and it means that they are unable to neutralize the interference from the EJ stations SPJ-40 “Elisra” of F-16I fighters and “jamming arrays” integrated into the APG-81 radars of the 5th generation F-35I “Adir” fighters. Meanwhile, Mr. Bronk did not take into account several extremely important details.

He never mentioned the presence of MiG-29SMT / M2 fighters in the elemental base of the avionics base of the above-described network-centric K-DlAE and E502-20 Turquoise tactical information exchange terminals, through which Syrian MiG pilots can receive target designation for Israeli fighters from "air fighters radar "A-50U VKS of Russia, and then launch missiles R-77 without the need to use radar N019MP or" Zhuk-M ".

As for the ammunition of the MiG-29SMT / M2 fighters, the open architecture of the element base of their avionics provides the ability to integrate not only the early version of the R-77 URVB with an effective range of 55-80 km when launched from medium and high altitudes, respectively, but also more advanced RVV-SD medium / long-range missile propulsion system (“Product 170-1”) with a range of 110 km (when intercepting the enemy’s air attack means in the front hemisphere) when launching from heights of more than 8-10 km. In this parameter, the RVV-SD are comparable to the most popular American air-to-air missiles AIM-120C-7 in the Israeli Air Force and are noticeably (more than 2 times) superior to the Israeli Derby air defense missiles. What is even more remarkable, in addition to the standard active semi-active radar GSN 9B-1103M-200PA, RVV-SD missiles can be equipped with an active-passive modification of the 9G-1103M-200PS RSGN with an additional passive guidance channel to the source of electronic interference in the HOJ mode.

During the implementation of this mode, the GSN 9B-1103M-200PS slot antenna array can provide passive guidance to the Elisra REB emitting station up to the approachable segment of the terminal portion of the trajectory (3-5 km) without revealing its location for radiation warning stations / electronic intelligence SPS-3000, also installed on fighters F-16I "Sufa". The active guidance mode can be implemented in the immediate vicinity of the intercepted F-16I, leaving the pilot a minimum “window” of time for performing an anti-ballistic maneuver. The presence of the MIL-STD-29B multiplex data bus in the MiG-2SMT / M1553 radio-electronic “stuffing” allows integration of the REB MSP-418K small-sized container complexes operating in the GJ-frequency ranges of centimeter waves and capable of breaking with high probability “capture” mode of carrier aircraft by active radar seeker of AIM-120C-7 AMRAAM missiles.

Ctrl Enter
Noticed oshЫbku Highlight text and press. Ctrl + Enter
We are
The unique MiG-23-98 is able to replace the Turkish Air Force. The tool that was forgotten in the Ministry of Defense of the Russian FederationPresidents, general secretary, drug lord and other influential persons
Military Reviewin Yandex News
Military Reviewin Google News
113 comments
Information
Dear reader, to leave comments on the publication, you must to register.