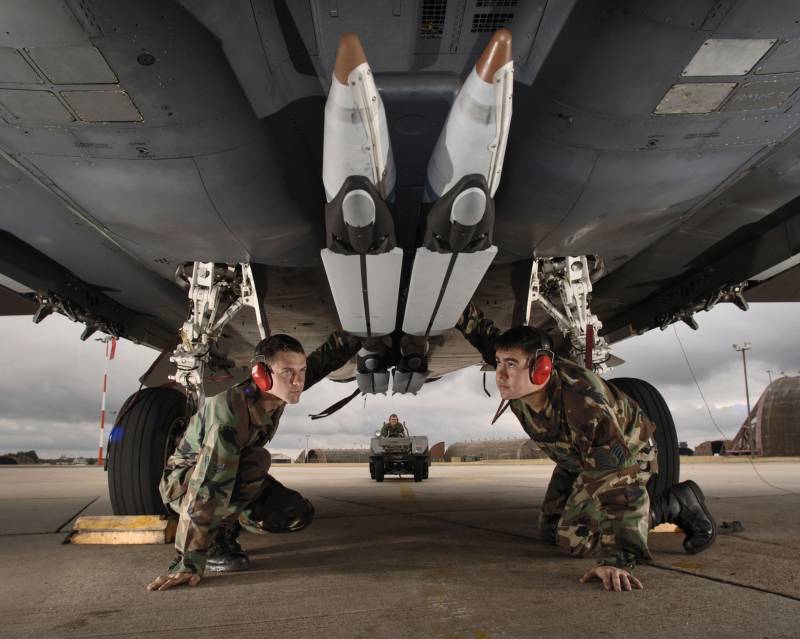 Currently, the US Air Force in the person of the Research Laboratory (AFRL) is engaged in several promising programs in the field of unmanned technology and guided weapons. One of them, Golden Horde ("Golden Horde"), is approaching the phase of flight tests. The first launches of “smart” weapons capable of interacting with each other will take place this year.

Up-to-date data on the Golden Horde was published on July 13 by Defense News. Information was received from AFRL Head of Ammunition, Colonel Harry A. Haase, who oversees a promising program.

Colonel Haase recalled that within the framework of Golden Horde, two types of aviation means of destruction (ASP). For one of them, the CSDB-1 bomb, the hardware of the control systems has already been developed. Now work is underway on software that can solve special problems. In parallel with the development, software testing is carried out, which makes it possible to identify all possible shortcomings in time.

AFRL is already planning flight tests of promising TSAs. The CSDB-1 bomb will be tested on an F-16 fighter. These events will begin next fall or winter. In the summer of next year, they will launch tests of the second product from the Golden Horde. A “smart” false CMALD target will be tested with the B-52 long-range bomber.

The purpose of the first aerial bomb dumps will be to test the operation of communications and to work out general issues of interaction between ammunition and carriers. In addition, products will be checked in the simplest situations. For example, investigate the ability weapons Change your route as you get new entries. Due to these functions, bombs will be able to bypass enemy air defense zones and more effectively hit designated targets. 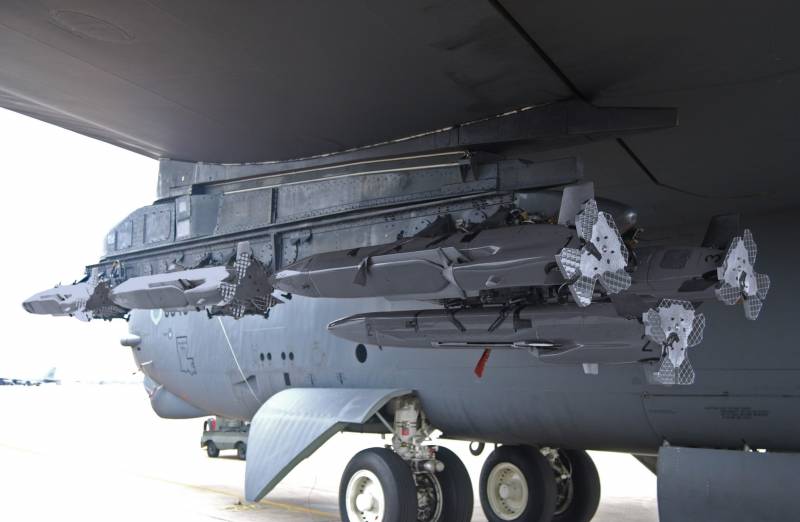 False targets ADM-160 MALD under wing B-52H. Photo Raytheon Corp.
In the near future, AFRL plans to place an order for the production of two types of experimental products for testing. There are no plans for serial production and deployment yet.

Less than two years are allotted to the study of the main design and application issues. In 2022, AFRL plans to begin a new phase of testing. This time, CSDB-1 and CMALD will be used together in a single operation. They have to work in a single "swarm", interact with each other and solve fairly complex combat missions.

The general management of the Golden Horde program is carried out by the Air Force Research Laboratory. Several commercial organizations were involved in the work. Some provided guided weapons of existing types, while others developed new control systems for them. The use of ready-made "platforms" and new management tools allows you to speed up and reduce the cost of work, as well as reduce some of the risks of a technical nature.

The CSDB-1 bomb project (Collaborative Small Diameter Bomb 1) is based on the Boeing GBU-39 SDB. New management hardware and software are being developed at Scientific Applications and Research Associates Inc. in conjunction with AFRL. The corresponding contract worth $ 100 million was signed last year.

The false target CMALD (Collaborative Miniature Air-Launched Decoy) is based on the Raytheon ADM-160 MALD project. In this project, Georgia Tech Applied Research is responsible for the control systems. The corporation received $ 85 million for the development and production of new funds. 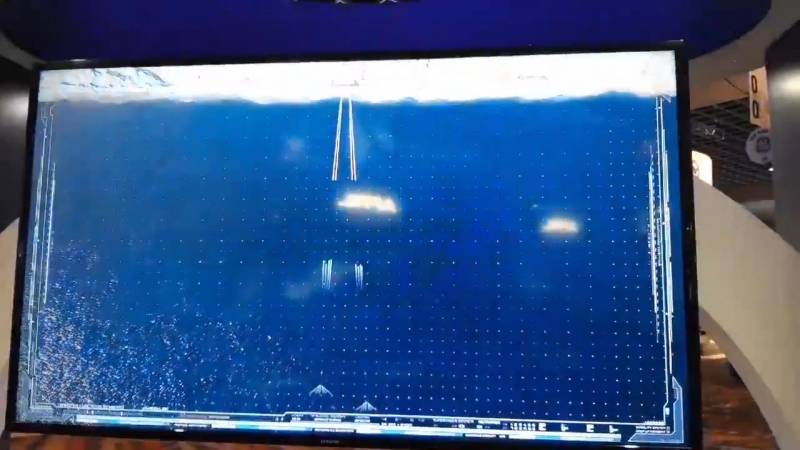 Joint attack of the "Horde" bombs. AFRL Demo Shot / twitter.com/pat_host
Refining existing ammunition involves replacing controls and guidance. The Golden Horde project uses more powerful computing systems. Brand new software is also being developed. It should provide not only the withdrawal of TSA to the goal, but also respond to emerging challenges and threats. For this, a so-called autonomy module - a collection of algorithms and reactions to all expected cases.

As carriers of the Golden Horde are considered serial tactical and strategic aircraft, armed with the US Air Force. For the use of new weapons, they do not need serious modernization. Compatibility is provided by a corresponding software update on-board weapons control equipment. At the same time, for a carrier aircraft, the use of Golden Horde will not fundamentally differ from the use of other aircraft weapons.

The main goal of the current project is to create promising aviation weapons that have elements of artificial intelligence and are able to work independently, as well as in a swarm or in a flock. It is expected that such TSA will be characterized by increased stability and survivability, as well as show benefits in efficiency.

The Golden Horde concept proposes to provide “smart” weapons with various data on the primary and secondary targets, the situation in the area of ​​its location, etc. At the same time, the bomb can receive additional data after dropping from the carrier, as well as transmit information to it and keep in touch with other ASP family.

After a reset, such a TSA should independently choose a route to the designated destination, taking into account the known data on the situation and bypassing the danger zones. Ammunition arriving at a given area will be able to exchange data and distribute identified targets to each other, increase the priority strike, etc. In addition, there is the possibility of retargeting the TSA after a reset or start. 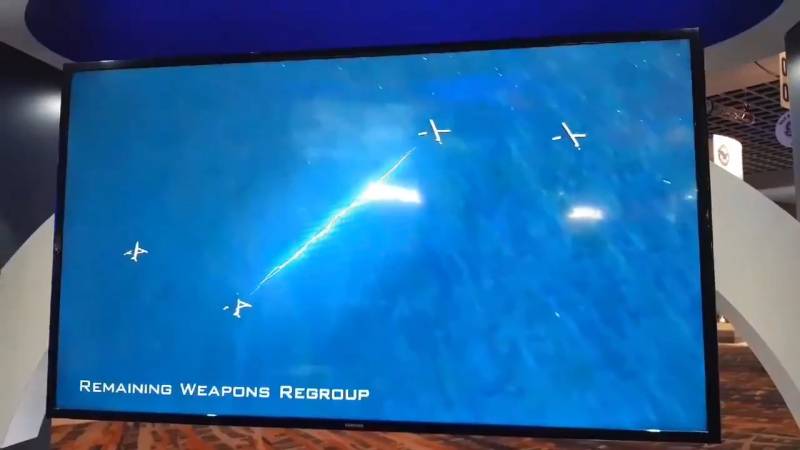 TSA interaction processes in flight. AFRL Demo Shot / twitter.com/pat_host
In the future, as the Golden Horde develops and improves, fundamentally new opportunities are possible. Tactical and strategic aviation planes, as well as their ammunition, can be integrated into an integrated information and control network, each element of which can fulfill its functions and fully interact with others. In particular, any aircraft will be able to transmit target data to any bombs or missiles - and they will be able to distribute missions among themselves in the most efficient way.

It should be recalled that now, under the leadership of AFRL, several programs are being carried out aimed at creating and improving network technologies for the air force. Projects Skyborg, Loyal Wingman, etc. provide for the creation of unmanned aerial vehicles capable of operating in a "flock", including led by a manned aircraft. They will have to take on the most dangerous tasks, reducing risks to humans.

Such UAV programs provide for the use of developed on-board computing tools, elements of artificial intelligence, etc. The Golden Horde program is based on similar principles, but in this case we are talking about the use of promising technologies on weapons.

Promising programs should lead to a serious change in the face of the US Air Force and the emergence of new unusual opportunities. Existing aircraft will be able to work with promising UAVs and use AI with artificial intelligence along with them. However, so far these are just plans. All promising programs are in their early stages and are still far from introducing technology into practice.

The Golden Horde is already preparing for flight tests, which will begin in the fall and will take the next few years. The development of only two ammunition of this family will continue, at least until 2022-23. The ways in which the further development of the program will go and how soon finished products will go into service is not known.