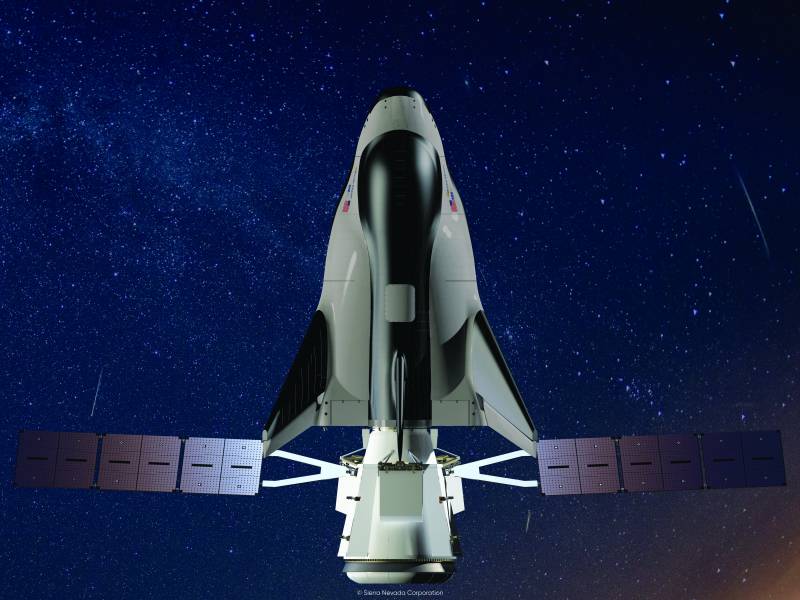 The Pentagon launches a new space project. Sierra Nevada has received an order to develop the light space station Unmanned Orbital Outpost (“Uninhabited Orbital Outpost”), which can carry various loads and provide a wide range of work. A promising project will be based on existing development.

Last July, the Defense Innovation Unit announced plans to create an “orbital outpost” based on one of the existing spacecraft. In the near future it was planned to study the available opportunities, receive proposals and launch design work.

The real launch of the new project on July 14, 2020 was reported by the press service of Sierra Nevada Corporation (SNC). DIU and SNC have signed an agreement to design, build and launch a UOO product for the Ministry of Defense. The cost of the contract and the timing of its implementation have not yet been disclosed. However, it should be remembered that last year stipulated the need for work within 24 months.

Under the terms of the contract, the new UOO station will be developed on the basis of the existing SNC Shooting Star transport ship project. The latter was originally created for operation with the reusable Dream Chaser ship and was supposed to provide flights to the ISS. Now it is proposed to redesign the structure and ensure the fulfillment of other tasks.

SNC notes that the Shooting Star project is already ready and has a high modernization potential. To create an “outpost” of type UOO, you will need only a slight alteration of the existing structure. However, the technical details of such improvements are not called. 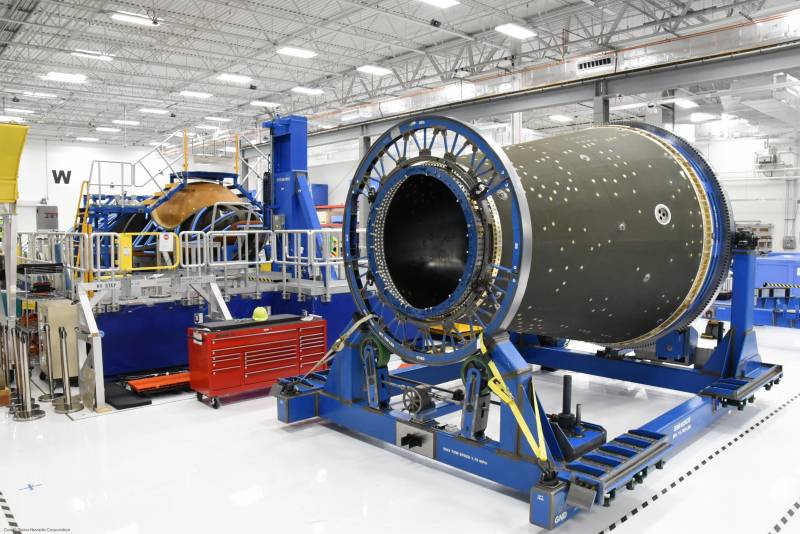 The hull of the first ship Shooting Star. UOO will get a similar unit
SNC Corporation is proud that the Pentagon has become interested in its project and will be able to get development in a new quality. Now Shooting Star will be able to find application not only in cargo missions with the Dream Chaser ship, but also in other areas.

The base for UOO will be the existing Shooting Star project, well known to specialists and the public. Available data on this ship allow us to imagine what the military “outpost” will be at its base. As the development company notes, fundamental design changes are not needed. Consequently, the characteristics will remain the same.

Shooting Star is a one-time cargo spaceship. It has been developed since 2016 as part of the NASA Commercial Resupply Services-2 program. The objective of the project was to create a “truck” capable of supporting the ISS.

The ship received a conical hull with a length of 15 feet (approx. 4,5 m). It accommodates a volumetric airtight compartment for the main payload, and on the outer surface provides for the installation of three leaky housings for cargo. The total carrying capacity of the ship is 10 thousand pounds (4,5 tons). The ship is equipped with a pair of folding solar panels with a total capacity of 6 kW. There are six shunting engines.

The Shooting Star product can be used either alone or with the reusable Dream Chaser. In the latter case, greater flexibility of application is provided, associated with the possibility of dividing goods into returnable and combustible in the atmosphere. 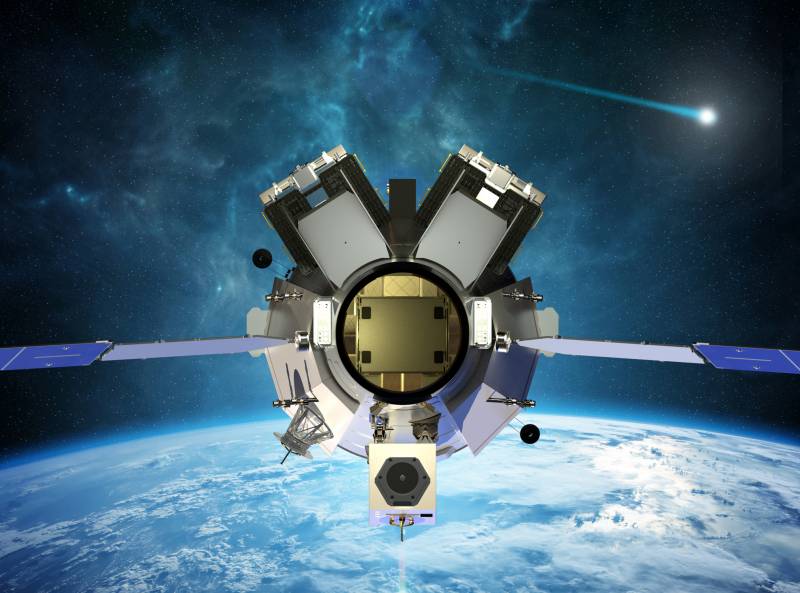 According to current plans, next year, Dream Chaser and Shooting Star in unmanned execution will make its first flight. Ships together will reach the ISS and deliver the necessary cargo to it. Then the reusable ship will pick up the necessary cargo, return to Earth and land, and the one-time “truck” will burn in dense layers of the atmosphere along with the waste.

It is alleged that the Shooting Star can deliver various loads into orbit, and in addition, the ship can be equipped with one or another equipment. The last opportunity forms the basis of the UOO project. However, specific payloads for such a station have not yet been called. Only the possibility of carrying out various experiments under microgravity conditions is indicated.

The SNC press service reports that the first version of the UOO station will operate in low Earth orbit. In the future, the emergence of new modifications that can work in other orbits, up to the flyby of the moon - depending on customer requirements.

Thus, UOO can primarily be considered as a research platform. With its help, DIU and the Pentagon will be able to conduct the necessary experiments, dramatically reducing their dependence on NASA and other structures. At their own research station, the military will be able to test communications, space reconnaissance, navigation systems, etc.

In the future, it is possible to use an “outpost” to solve specific military tasks. Having worked as a test platform and confirming the operability of its load, UOO can become a communications satellite, reconnaissance, etc. At such a station you can even place weapon - not violating existing international treaties. In the recent past, the possibility of further development of the project was mentioned, the result of which will be a manned outpost station for certain tasks. 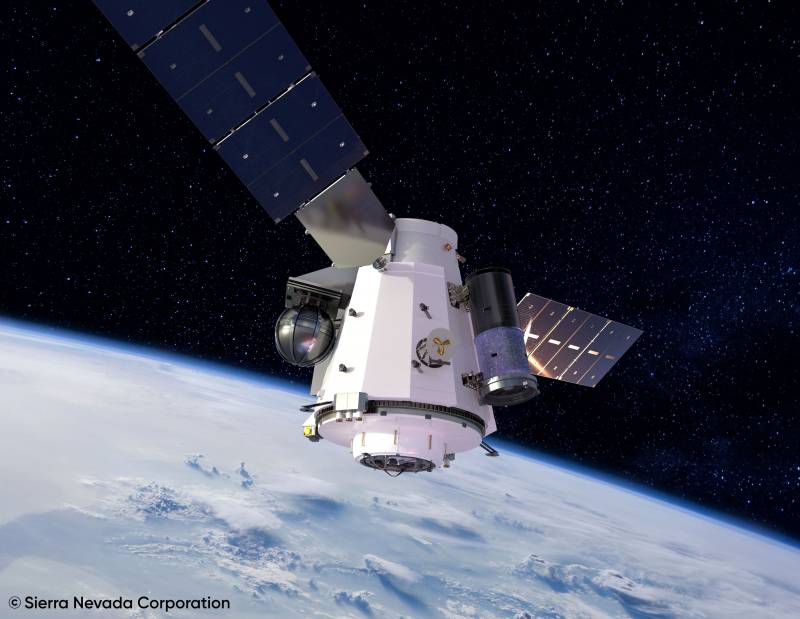 It is alleged that the development of UOO based on Shooting Star will not take much time, but specific dates have not yet been announced. Last year’s DIU statements suggest that the first flight of the “orbital outpost” will take place no later than 2022 - about a year after the launch of the base cargo ship. After this, it is possible to begin active operation with regular starts.

A new Pentagon order is of particular importance to the SNC. As part of the Dream Chaser and Shooting Star projects, she works in the non-military sphere - through NASA. Obtaining a contract from DIU allows you to transfer existing developments to the military field and get all the attendant advantages and opportunities. In fact, one project with some improvements can be implemented in two departments. Accordingly, SNC can count on more orders and additional revenue.

A military project from SNC may be more promising than a "commercial" one. As part of the NASA CRS-2 program, the Shooting Star ship has to deal with quite fierce competition. In the military sphere, the situation is simpler - an agreement on the creation of UOO has already been signed, and you can safely begin work without worrying about its future.

DIU's UOO program is also useful for the military. With its help, the Pentagon will receive its own multi-purpose space platform, suitable for experiments and practical activities. The Orbital Outpost will be a good addition to other military spacecraft, as well as ensure the further development of this area.

Thus, in the near future, Sierra Nevada will have to complete several important projects at once. Next year, she should conduct the first launch of the system as part of the Dream Chaser and Shooting Star ships, and in parallel will work on a military version of the latter - Unmanned Orbital Outpost. Such a station can make its first flight in 2022. Perhaps, already in the first flight it will have a real payload.

In general, the UOO project is quite interesting and has good prospects. In just a few years, the “orbital outpost” will be able to show all its capabilities and enter full operation. The advent of such a technique opens up new possibilities for the Pentagon. Time will tell how they will be used, what it will lead to and how it will affect the US military space program.