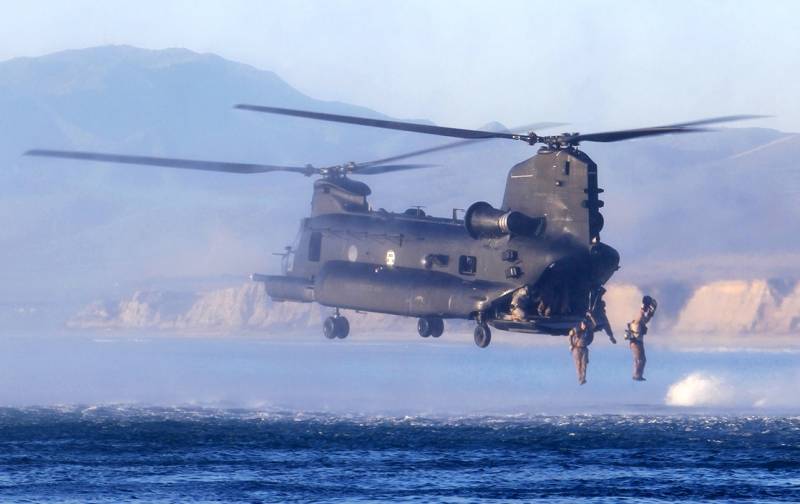 The United States Marine Corps Special Operations Command in its current form was formed only on February 24, 2006 and is the youngest such command. The US Marine Corps is quite numerous, but there are not many special forces in it. The staff of the United States ILCC Special Operations Command currently stands at approximately three thousand. Among all special operations commands, this is the smallest value.

The United States Marine Corps Forces Special Operations Command (MARSOC) was formed relatively recently. Initially, it was believed that the reconnaissance battalions in the ILC were enough to solve all the problems facing this American military branch. However, after the terrorist attacks in the United States in 2001, a reappraisal of values ​​took place in the country and the army. Then it was decided to separate separate elite special forces in the corps, which would be integrated into the SOCOM US Special Operations Command.

As a result, after the September 11 attacks and changes in American politics, the process of forming a new command began. This process was completely completed by 2006, when the US Special Forces Command Special Operations Command was officially formed. At the same time, the personnel of the new command were initially recruited precisely from the fighters of the reconnaissance battalions of the Marine Corps. Since their inception, MARSOC fighters have been involved in the global war on terrorism around the world.

According to data from February 2019, over the 13 years of its existence, the new Special Operations Command of the ILC has carried out three hundred deployments in 17 countries of the world, while special forces have received more than 300 state awards. During the same time, 41 commandos and two specially trained dogs were killed during the fighting and the training process. 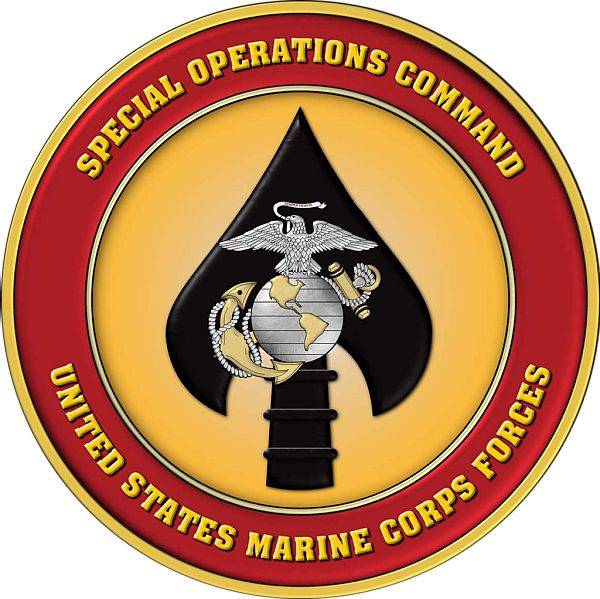 USCM Special Operations Command Emblem
The current headquarters of the US Marine Corps Special Operations Command is Camp Lejen, a military base located in Jacksonville, North Carolina. It is on this basis that the main forces and governing bodies of special operations of the ILC are deployed. Currently, the command is led by an American of Korean descent, Major General Daniel Yu. The general is famous for the fact that in 2014 he commanded all parts of the United States Marine Corps in Afghanistan in Helmand Province, at that time there were about seven thousand troops under his command. Currently, the Commission for Special Operations of the ILC has a little more than three thousand personnel, including about 200 civilian specialists.

Organizationally, the Special Operations Command of the ILC consists of a regiment of marine corps raiders of a three-battalion composition, a support group for marine raiders and a training center for training marine raiders. It is the regiment of naval raiders that is the main striking and fighting force of the Special Operations Command of the ILC. The regiment got its name in honor of the elite units of the US Marine Corps during the Second World War.

Sea raiders lead their own history since World War II, when an elite division of marine raiders was formed as part of the US Marine Corps. The soldiers of this unit were light infantry, including the ability to land from conventional rubber boats and operate behind the front line behind enemy lines. In its modern form, the regiment was re-formed in February 2006. A three-battalion regiment (1st, 2nd and 3rd) is based on two bases located on different US coasts. In addition to the base, in North Carolina, regiment units are based on the Pacific coast at the Pendleton Marine Corps Base Camp in San Diego County, California. The total number of the regiment is approximately 1,5 thousand people.

The main combat unit of marine raiders is the Maritime Special Operations Group (MSOT), each such group consists of 14 people. Of these, four people - this is a headquarters group, five people each - two tactical detachments identical in their capabilities. Each battalion of marine raiders consists of four companies in four such groups. 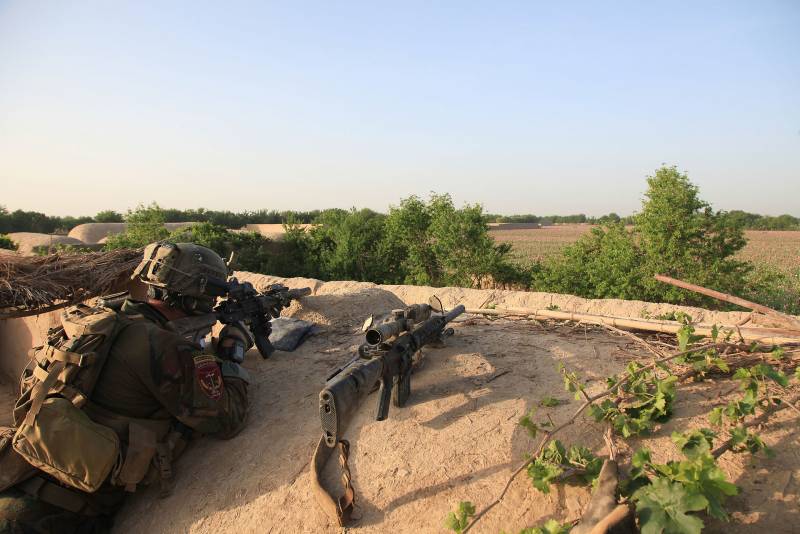 Marine Raiders in Afghanistan
The fighters of the naval raider regiment are trained in direct combat operations, special intelligence, methods of waging an unconventional war (guerrilla warfare), and the fight against terrorism (including those that can be used to combat modern maritime piracy). They can also be used to suppress rebellions and fight rebels, including in other countries, conduct information operations and provide assistance to security forces.

That is, they are able to solve all the same problems as the soldiers of other units of the American special operations forces. But with its own specifics - in particular, with a course in scuba diving and rescue on water. Also, the fighters are trained in the operation of small boats and small landing craft. At the same time, special forces of the US Marine Corps also undergo parachute training, they can be parachuted.

The combat debut of the Marine Raiders in the 2007st century took place in Afghanistan, where special forces have been involved in combat operations since 2015. Also, sea raiders took part in the rescue of hostages during a terrorist attack on the Radisson Blu hotel in the capital of Mali in November 2016. They took part in the liberation from the terrorists of the Iraqi city of Mosul in 2017, and already in XNUMX helped to liberate the city of Maravi in ​​the Philippines.

The support group for marine raiders is organizationally similar to a regular regiment consisting of the headquarters of the group and three battalions (1st, 2nd, 3rd) support for marine raiders. Support battalions are deployed along with battalions of marines and provide the latter with vital support in a number of important areas. In particular, the units solve issues related to logistics, communication support and communications, fire support, information and analytical support. 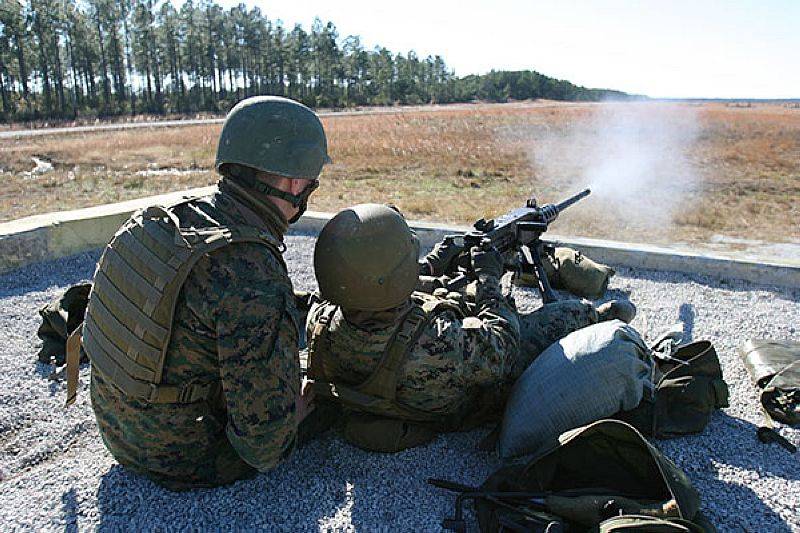 Marines from the Marine Raiders Support Group. Shooting training with a 12,7 mm machine gun
Units can conduct reconnaissance, as well as engage in mine clearance. Support battalions include well-trained dog handlers and trained dogs. Also in the composition there are separate groups for strengthening firepower, as well as spotters for fire, including aviation spotters.

In addition to special training, fighters of the Marine Raider Support Groups undergo the usual training of marines and are trained in combat skills in the infantry school. That is, they are practically familiar with the methods of warfare in urban areas, methods of patrolling the area, marksmanship skills, as well as methods of information warfare. It should be highlighted and the fact that all fighters of special units of the marine corps are familiar with foreign weapons and learn to put it into practice.