Japanese White Paper: Interaction with the United States and the “Revisionist Powers" 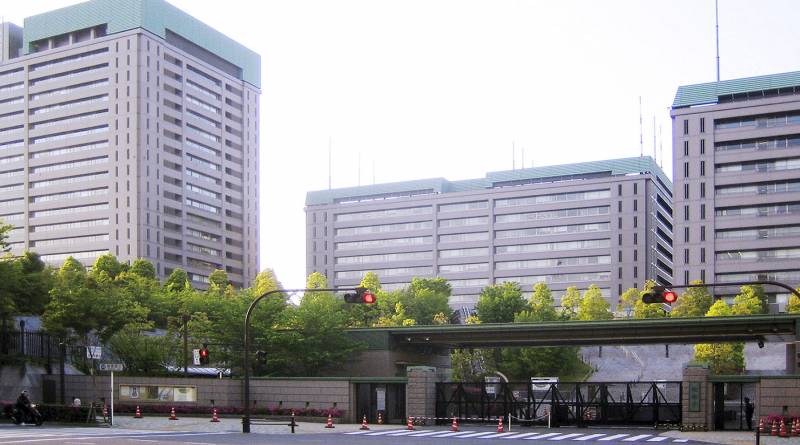 The central apparatus of the Ministry of Defense of Japan

The Ministry of Defense of Japan annually publishes a White Paper, a report describing the current situation, the threats and challenges, as well as ways and strategies to ensure national security. The other day a new such document was published for 2020.

The authors of the report note that around Japan and in the whole world there are a number of characteristic trends that can threaten security. New threats are added to already known threats. Some challenges are complex, and the forces of one state are insufficient to respond to them.

It is noted that the problem of rivalry between countries in the political, economic and military fields is becoming increasingly relevant. The situation is exacerbated by “hybrid” strategies and “gray zones” that require a special reaction. Various technological advances are of great importance in the field of security. New technologies are also able to influence the course of hostilities.

A fundamentally new factor this year was coronavirus infection. The disease imposes restrictions on military activities and can affect the security of countries. For this reason, it is necessary to monitor the situation.

The "White Paper" notes the peculiarities of the situation around the Japanese islands. Near Japan are several large states that have high military potential and continue to build it. At the same time, there are no workable formats for international security cooperation in the Indo-Pacific region. 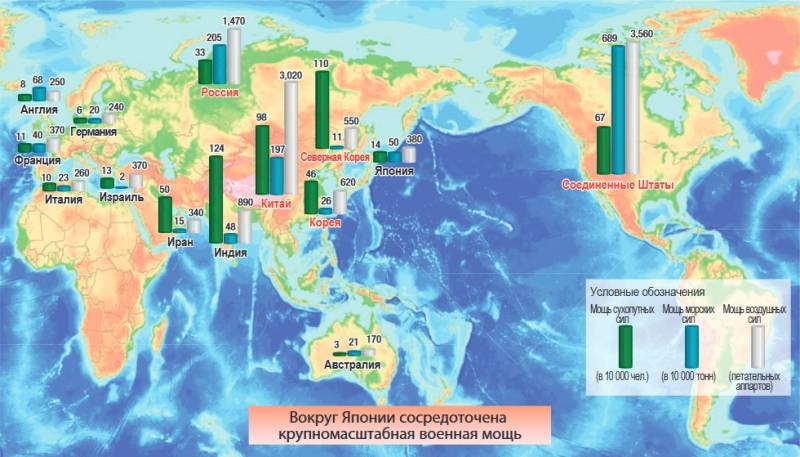 Among all the countries of the region, three are considered as potential adversaries: China, Russia and the DPRK. The first two in the report are called "revisionist powers." Allied Japan, the United States, for obvious reasons, did not receive such an epithet.

The Japanese Ministry of Defense is concerned about the military and economic activities of China. By the middle of the century, Beijing intends to build a “first-class armed force,” for which it is increasing defense spending, and is also continuing extensive military construction. The observed measures lead to the strengthening of the capabilities of A2 / AD, as well as to the growth of the potential for action in remote regions. The development of the army is carried out through the creation and development of new technologies. The army also actively interacts with non-military structures.

Japan expresses concern about the increased activity of the PLA near its territories and water areas, including in disputed areas. The risk of a military solution to the issue of the Senkaku Islands remains; construction of artificial islands in the South China Sea continues for deployment aviation and ships. The PRC also goes to more remote areas of the Indian and Pacific Ocean, including in the framework of cooperation with foreign countries.

Considering Russian activities, the Ministry of Defense of Japan notes the general processes of modernization of the armed forces and the intensification of their work in the Far Eastern region. New models and systems are being developed in various fields, right down to space and electromagnetic weapons. Active work of the armed forces continues even with the spread of the coronavirus. 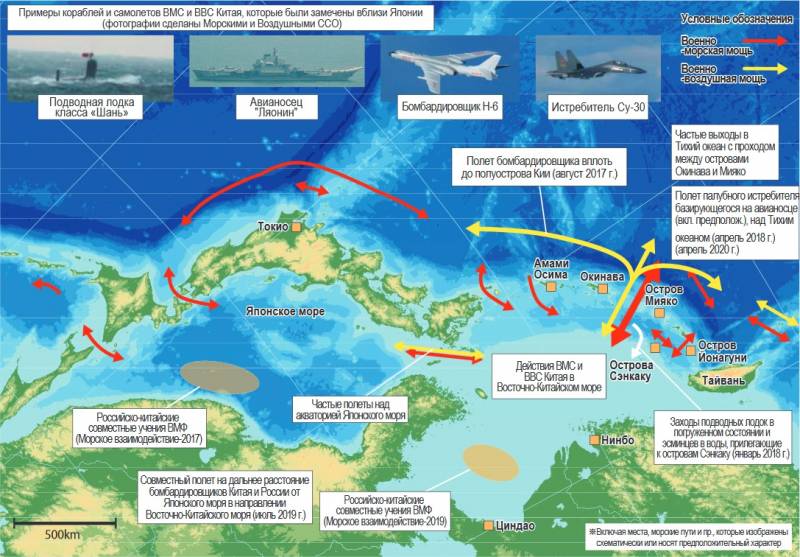 Activity of third countries near Japan
The White Book draws attention to the strengthening of cooperation between Russia and China in the military sphere. Both countries deny the possibility of creating a full-fledged military alliance, but regularly conduct joint exercises. Documents on military-technical cooperation were also signed.

Separately note the activities of Russia in the "original Japanese northern territories." The authors of the White Paper recall the recent patrols of the Kuril Islands by airborne forces, and also indicate the deployment of new units and the conduct of exercises.

The United States is still considered the main ally. With their help, Japan is going to confront the "revisionist powers" in the Indo-Pacific region. In recent years, the United States has been paying particular attention to this region, which should affect the situation and security in it.

Cooperation with the United States is the basis of Japan’s national security policy. Within its framework, various meetings are held at different levels, regular consultations and general coordination of joint actions. Joint work is ongoing in various fields, and such interaction is proposed to be expanded.

Separately, the question of the deployment of American troops in Japanese territories is considered. Such placement of parts works for joint security, but it affects the local infrastructure and living conditions of the population. It is proposed to reduce the burden on Japan due to various measures. In particular, the construction of a new territory near Fr. Okinawa to host military installations. Also, over the past few years, the United States returned to Japan more than 4000 hectares of territories. 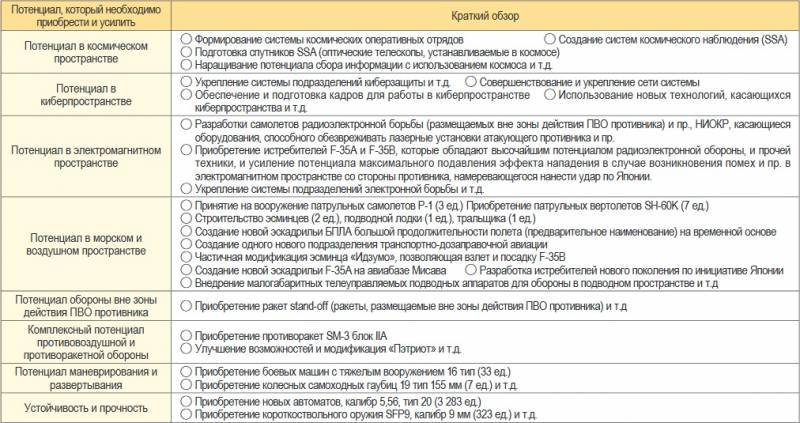 At the end of 2013, Japan adopted the National Security Strategy. Its main provisions are the policy of "active pacifism", international cooperation in peacekeeping, etc. At the end of 2018, another document was adopted - the Main National Defense Program, which defines military development and strategies for the next decade. New documents of this kind have not yet been adopted, and ensuring the country's security is carried out in accordance with existing ones.

The current security course provides for the preservation and development of the Self-Defense Forces, capable of responding to any aggression - both independently and with the help of allies. In view of the new challenges, it is proposed to build up the capabilities of the Force using the most advanced technologies. Self-defense forces must master space, cyberspace, electromagnetic systems, etc. At the same time, the need to develop “traditional” spheres is not ruled out.

There is a medium-term military development plan for 2019-2023. It provides for the strengthening of human resources, the completion of relevant construction projects and the launch of new ones. In addition, the plan requires a review of the structure and contours of the management of the Self-Defense Forces in order to better match the current situation.

All of these measures and programs require appropriate funding. The White Paper indicates that there has been a steady increase in the defense budget over the past eight years. So, in FY2020 5,07 trillion yen (approx. 47,2 billion US dollars) was allocated for defense. The growth compared to the previous year was 61,8 billion yen ($ 575 million).

The new “White Book” is minimally different from the previous one published in September last year. The main differences are the listing of recent international events, new international events, etc. A separate new topic was the notorious coronavirus, which affects political and military processes. 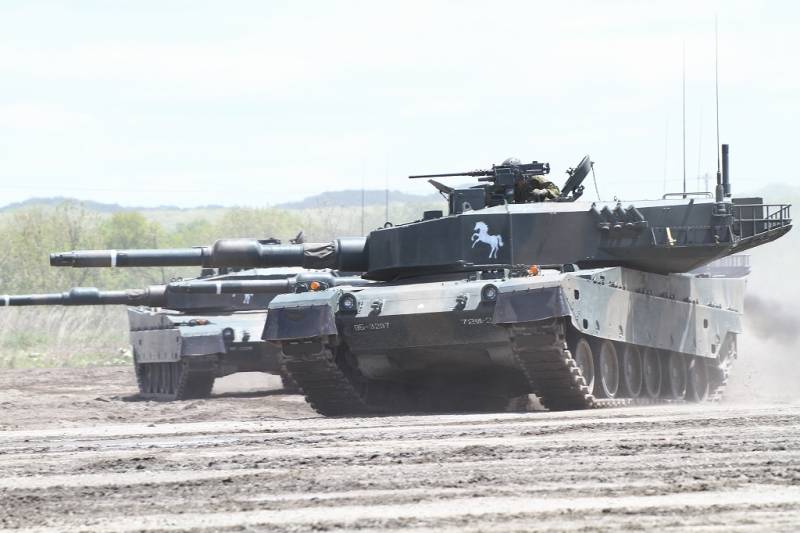 On the whole, Japan maintains its course of "active pacifism" and intends to defend itself against possible aggression from unfriendly countries. The list of potential aggressors remains the same for many years. Japan also has a long-standing and reliable ally, which they are not going to refuse to help, although some issues in relations with the United States require clarification.

Japan's military potential remains extremely defensive. Measures are being taken to develop it, including taking into account current trends and current challenges. At the same time, cardinal restructuring with serious offensive capabilities is not planned. Such a reform will be contrary to existing legislation, and in addition, will go beyond the adopted framework of the defense budget, which will threaten other areas.

The situation in the world is constantly changing, and countries are faced with new challenges, come into confrontation, etc. The Japanese "White Book" notes all these phenomena, but does not offer fundamental changes in the Self-Defense Forces to combat them. Apparently, in the near future Japan will retain its characteristic military-political position, and the new White Books will again not be seriously different from the previous ones.

Ctrl Enter
Noticed oshЫbku Highlight text and press. Ctrl + Enter
We are
Predators on the FrontierSituational analysis of the death of the MH17 flight (Malaysian Boeing 777), made on the basis of engineering analysis from 15.08.2014
Military Reviewin Yandex News
Military Reviewin Google News
16 comments
Information
Dear reader, to leave comments on the publication, you must to register.