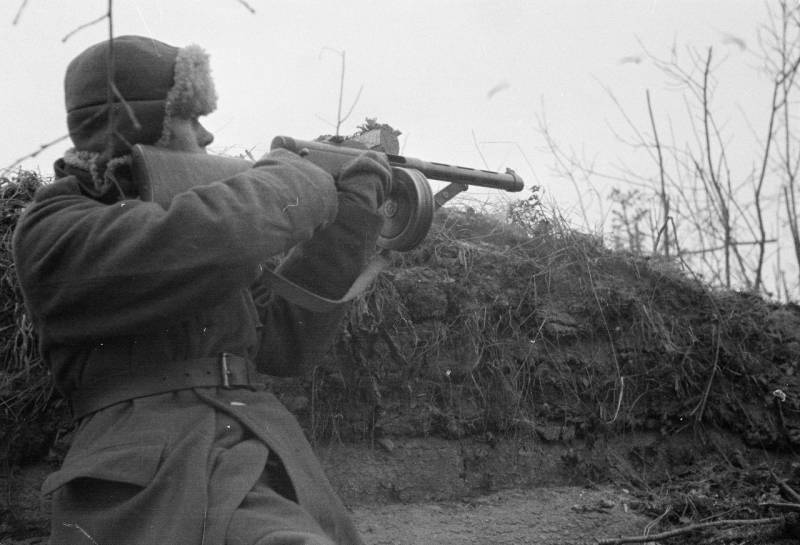 It was a great success for Finland that in the 1920s, designer Aimo Lahti became interested in the design of submachine guns. Over time, the designer managed to create a series of small arms weapons. And his 1931 Suomi submachine gun became a truly successful weapon, turning into a serious threat to the Red Army during the years of the Winter War of 1939-1940. At the same time, an unprepared person can easily confuse the Finnish submachine gun with a drum magazine with the Soviet Shpagin submachine gun of the 1941 model, so these weapons of the two warring countries turned out to be similar in appearance.

The creator of the Finnish automatic weapons was self-taught and had no special education, so Finland was very lucky in this regard. Aimo Lahti came from an ordinary peasant family. The future designer of small arms and major general of the Finnish army was born in the village of Viyala in 1896, today it is the territory of the small city of Akaa. Aimo Lahti was the eldest of five brothers. Perhaps that is why, after graduating from the 6th grade of the school, he went to work at a glass factory. So he could help his family.

It is believed that it was at this time, having bought a rifle of the Berdan system with the money earned at the glass factory, the future designer was seriously interested in small arms. After serving in the army and not having worked for a long time on the railway, Lahti became the armourer of the Finnish army. In 1922, he substantively became acquainted with automatic weapons, having studied the German MP-18 submachine gun, which was difficult to attribute to successful models. Based on the experience gained, the self-taught designer designed his own Suomi M-22 submachine gun, which, after refinement in the 1920s, turned into the serial Suomi Konepistooli M / 31, or KP-31. It is noteworthy that the weapon received the name of the country, the self-name of Finland - Suomi.

In addition to submachine guns, Lahti created a successful modernization of the Mosin M-27 rifle system, nicknamed "Spitz" due to the characteristic front sight. Aimo Lahti also created and secured the launch of the M-26 light machine gun, which also had a drum magazine for 75 rounds. He created the designer and the Finnish Lahti L-20 39 mm anti-tank rifle, which could effectively deal with all types of Soviet light tanks. But still, the Suomi submachine gun remained a truly successful and massive weapon of the designer. 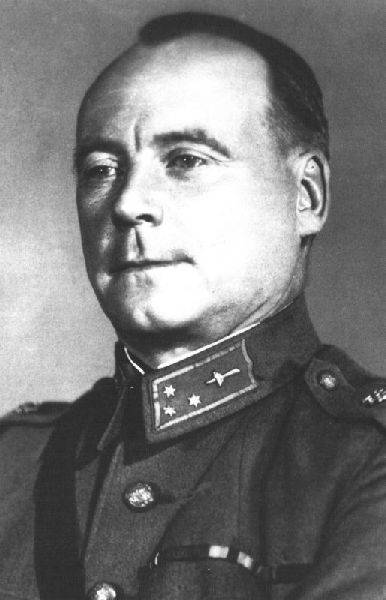 Small Arms Designer Aimo Johannes Lahti
Until 1953, the total production of Suomi KP-31 submachine guns amounted to almost 80 thousand units, for small Finland these are very large numbers. At the same time, the Finnish military and police directly received almost 57 thousand Suomi submachine guns, and the rest were exported. Weapons were bought in large quantities by Switzerland, Bulgaria, Croatia, Estonia, and Germany acquired it during the war years. Serial production under license over the years has been deployed in Denmark, Sweden, Switzerland.

In general, the device of the Finnish submachine gun can be called typical of the first generation of such weapons, which were developed on the basis of the German MP-18 and other early PP models. As the main cartridge, Lahti initially chose the 9x19 mm Parabellum pistol cartridge, widely distributed by then in the world. Despite the abundance of common places, the Finnish model differed from its predecessors and competitors in its own features that could not be found in weapons of other countries of the world.

A distinctive feature of the Finnish submachine guns was the high quality of production, when creating weapons, metal cutting machines were widely used. Good production is noted by many modern researchers. True, this approach had a drawback. For example, the receiver was fully milled, which led to an increase in the mass of the product. With a drum store, Suomi weighed nearly 6,5 kg. Also, weapons could not be called technological in the sense that it was difficult to launch them into mass production in a total war. The cost of the submachine gun was also quite large, which left its mark on the production of weapons.

Structurally, the Suomi submachine gun consisted of a fully milled round-shaped receiver, a solid wooden box, a barrel, a removable casing on the barrel and a trigger. Aimo Lahti placed a fuse in the front of the trigger guard, resembling a L-shaped part. The fuse also served as a translator of fire modes. 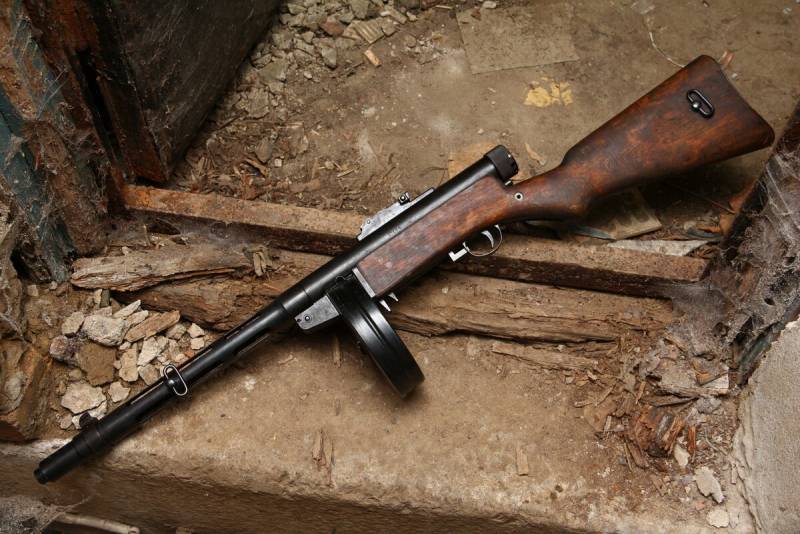 Submachine gun Suomi KP-31
The automatic reloading of weapons worked due to the recoil of the free shutter from recoil during firing. Shooting from a submachine gun was conducted from the open bolt, while the firing pin is fixed in the cup of the bolt, the barrel of the weapon does not lock when firing. To slow down the rate of fire necessary to increase the accuracy of the fire, a model of a vacuum shutter brake was implemented in the model. The receiver, the cover of the receiver and the shutter were so tightly fitted that the shutter moved like a piston in a cylinder, air breakthrough between the shutter and the walls of the receiver was almost completely absent. And directly in the back plate of the receiver, the designer placed a valve that released air only from the inside out.

Due to the system implemented by Lahti with a slower shutter speed, it was possible to reduce the mass of the shutter itself, as well as to increase the accuracy of fire from a submachine gun, especially with single shots. In this case, the weapon was equipped with a sector sight, which was adjusted to fire up to 500 meters. Obviously, such values ​​were redundant. Like most of the submachine guns of the Second World War, the weapons turned out to be really effective at a distance of no more than 200 meters, especially in the automatic firing mode.

An important feature of the Finnish submachine gun, which distinguished it from competitors from other countries, was a removable barrel casing and the barrel itself. This design feature of the weapon gave Finnish soldiers an advantage in battle, when it was easy to change and change the barrel itself. With the availability of spare barrels, this allowed the soldiers not to be afraid of a possible overheating and failure of the weapon. The overheated barrel and casing could be easily changed directly during the clash. The relatively long quick-detachable barrel (314 mm) also provided the weapon with good ballistics. For comparison: in PPSh, the barrel length was 269 mm.

It is important to emphasize here that some of the design decisions that related Suomi with light machine guns were dictated by the fact that the Finnish army lacked automatic weapons. At the initial stage of its creation, the new submachine gun was seriously considered as a manual ersatz submachine gun and weapons of fire support of the squad in short-range combat. 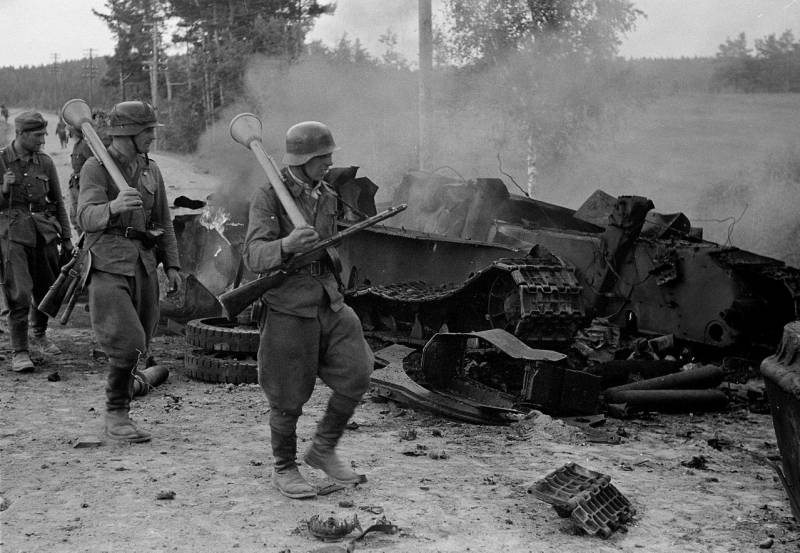 Finnish soldiers with a Suomi submachine gun and panzerfausts against a blown up tank
The store’s receiver with a Suomi submachine gun had an unusual “open” design at that time, which made it possible to use various large-capacity stores. Especially for this model in Finland, several types of stores were created, among which the most famous was the drum magazine for 70 rounds of the Koskinen design, adopted for service in 1936. Also, the weapon could be equipped with a 40-round disk magazine and a 20-round box magazine. Without a magazine and cartridges, the submachine gun weighed about 4,5 kg, with an equipped drum magazine for 70 rounds, the weight of the weapon was already approaching 6,5 kg.

The Suomi KP-31 submachine gun turned out to be an ideal weapon for a war in winter conditions, the weapon was unpretentious and reliable. This model was used by the Finnish military during the years of the Winter War of 1939-1940, and then more massively - during the Second World War. At the same time, at the end of World War II, the Finns managed to use their submachine guns against their recent allies during short-lived military operations against German troops in the Lapland War.

The Finnish Suomi submachine gun made a great impression on the Red Army men and commanders of the Red Army, although at that time in the Finnish army there were no more than four thousand KP-31s. Despite their small numbers, the Finns defended themselves quite skillfully, demonstrating a good level of training and education of personnel. Against this background, they used their few submachine guns quite skillfully, so the Red Army paid attention to this automatic weapon. In the Soviet divisions that participated in the war, initially there were no submachine guns at all, which, however, was offset by the proliferation of semi-automatic and automatic rifles and the limited use of Fedorov assault rifles. Already during the conflict, Degtyarev submachine guns (PDP) began to arrive in units. This was an example of feedback between the howling army on the one hand and the high command and the military-industrial complex on the other. 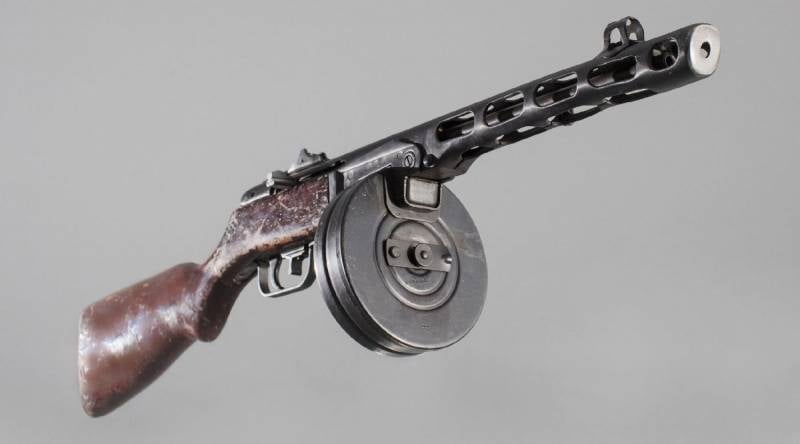 PPSH-41
Familiarity with Finnish tactics and feedback on the use of the Suomi submachine gun by the Finns became a real impetus for the intensification of the development of such weapons in the USSR, as well as the deployment of mass production and supplying the army with new weapons. At the same time, plans to establish mass production of submachine guns existed in the Soviet Union even before the Soviet-Finnish War, but this military conflict became a catalyst for this process, clearly confirming and proving the effectiveness of such weapons in combat conditions.

Also on the model of the Finnish submachine gun KP-31 in the USSR, in the short term, an own drum shop was created for the later versions of the PPD and PPSh-41, designed for 71 rounds. This drum store for many years will be the hallmark of Soviet automatic weapons during the Second World War.