Constantinople world. Russian victory in the Sea of ​​Azov 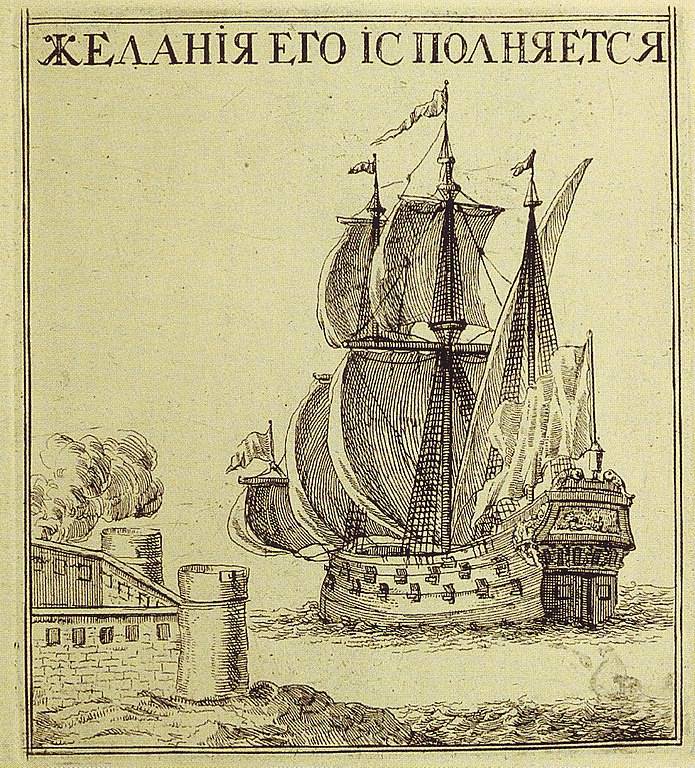 The ship "Fortress" on the engraving of Adrian Shkhonebek

320 years ago, on July 14, 1700, the Constantinople Peace was concluded. Victory in the Russian-Turkish war. The return of Russia to Azov and the Sea of ​​Azov.

The government of Princess Sophia (ruled Russia in 1682-1689) continued the course towards restoring the position of the Russian state in the Black Sea region. Such a policy met national interests: military-strategic, economic. On the other hand, Sophia and her favorite, Prince Vasily Golitsyn, pursued a policy of rapprochement with Western Europe. In 1684, the Holy League was created: the union of the Holy Roman Empire (led by the Austrian emperor), the Commonwealth and Venice against Turkey. The Allies planned to expel the Ottomans from Europe. The mighty Ottoman Empire was already in crisis, but still retained the position of a great naval power. Therefore, they decided to attract additional forces to the union - Russia.

In 1684, negotiations began on Russia's accession to the Holy Alliance. However, the matter was slowed down due to the position of Poland. Moscow expressed its readiness to oppose the Ports, but demanded the official concession of Kiev by the Poles. It is clear that the Polish side did not want to concede. Negotiations took place for two years, only in April 1686 the Eternal Peace was concluded between Russia and the Commonwealth. Poland recognized the Russian Left-Bank Ukraine, Kiev, Zaporozhye, Smolensk and Chernigov. Poles received a ransom for Kiev. The right-bank part of Little Russia remained under the rule of the Polish crown. Polish authorities pledged to provide Orthodox religion freedom. Moscow tore the world with Turkey and the Crimean Khanate, entered into an anti-Turkish alliance.

Thus, Russia became closer to the countries of Western Europe on the basis of anti-Turkish policy. In the future, this alliance became the basis for the Russo-Polish alliance against Sweden. In 1687 and 1689 Vasily Golitsyn twice led the Russian army to the Crimea, but without much success. Affected by the lack of a rear support supply base near the peninsula. The area between the possessions of Russia and the Crimean Khanate was devastated long ago ("Wild Field"). Crimean troops used scorched earth tactics. They set fire to the steppe, the wells were poisoned. The large Russian army was forced to turn back due to lack of fodder, water and the outbreak of the epidemic.

In 1689, Queen Sophia was overthrown by the supporters of Tsarevich Peter. The Naryshkin government came to power largely in the wake of criticism of unsuccessful campaigns in the Crimea, so the first years of the war, in fact, was stopped. The young king himself was busy with various entertainments, including naval ones. The fighting continued only by the Cossacks. However, Peter Alekseevich quickly realized that Russia, a country of ancient maritime traditions, has an extremely limited access to the sea. In the north-west, access to the Baltic was closed by Sweden. The whole Black Sea region with the mouths of the Kuban, Don, Dnieper, Bug, Dniester and Danube was held by Turkey and the Crimean Khanate. Only on the White Sea coast, hundreds of miles from the main vital and economic centers of the Russian kingdom, the great power had a single port - Arkhangelsk.

The great Russian Tsar Ivan the Terrible understood the need for a breakthrough to the Baltic or to the Black Sea. True, I could not realize this difficult task. Realized the need for a breakthrough to the sea and young Peter. The sovereign set the first task of Moscow’s foreign policy to access the Sea of ​​Azov and the Black Sea. Peter decided to change the direction of the main blow: to attack not the Crimea, but Azov at the mouth of the Don River and the Dnieper fortresses of the Ottomans. The direction of the blows was correct: with victory, Russia received the mouth of the Don and Dnieper, access to the Sea of ​​Azov and the Black Sea. In 1695, Peter led one army to Azov, and the second governor Sheremetev to the lower reaches of the Dnieper. They could not take the Azov. Affected command errors and lack of fleet. The Ottoman garrison was not blocked from the sea and constantly received reinforcements and supplies. The Russian army had to retreat. Sheremetev fought successfully: won several fortresses from the enemy.

Peter quickly studied and worked on errors. He launched a large-scale work to create a flotilla. Most of the military and transport ships were built in the Voronezh region and in the village of Preobrazhensky near Moscow. Mobilized carpenters, blacksmiths and working people throughout Russia. Masters were called from Arkhangelsk, Vologda, Nizhny Novgorod and other cities and places. Attracted soldiers, archers, Cossacks, gunners and peasants. Materials were brought here from all over the country: wood, hemp, resin, iron, etc. In winter, parts of ships and ships were built, in the spring they were assembled at the Voronezh shipyard. The first two sailing 36-gun ships, over 20 galleys, etc. were built. As a result, in the center of the Russian Empire, an “naval military caravan” —the first combat formation of the revived Russian fleet — was formed exclusively in a short time and far from the sea. At the same time, ground forces were strengthened and doubled. Up to 1500 transports (plows, baroque, boats, etc.) were prepared for transportation.

April 23, 1696, the first transport echelon began moving downstream the Don. They were followed by other combat and transport vessels. In May, Russian troops besieged Azov. At the same time, a Turkish naval convoy with reinforcements and ammunition was defeated. Russian ships cut off the Turkish fortress from help from the sea. The Turks sent a rather strong squadron to Azov, but the Ottomans did not dare to enter the battle. The fortress was deprived of help from the sea, which played an important role in its fall. After some time, the position of the Turkish garrison became hopeless, on July 18, 1696, the Ottomans capitulated. The whole course of the Don became open to Russian courts (For more details, see the articles on VO: "How the Russian army stormed Azov"; Part 2). 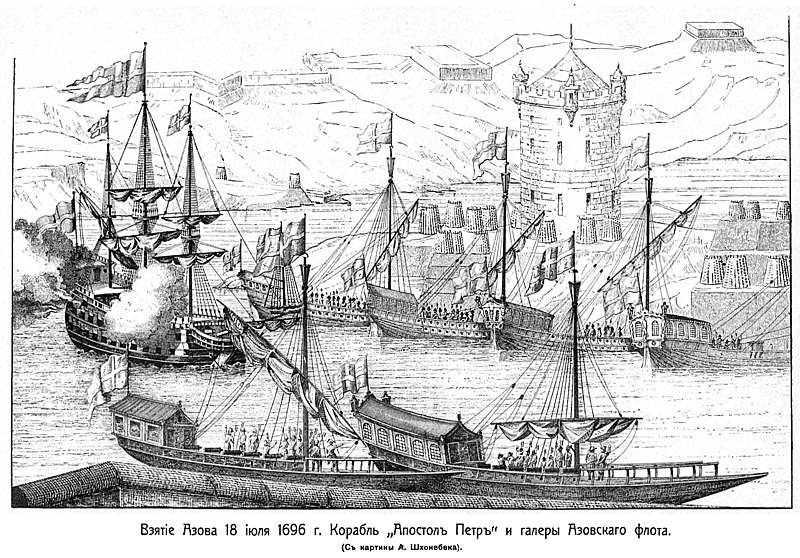 Creation of the Azov fleet and victory

After the loss of Azov, Port did not want to accept defeat; the war continued. To maintain an important strategic point and develop the offensive, Russia needed a strong army and navy. In the autumn of 1696, the Boyars' Duma decided: “There must be ships for the sea ...” The creation of a regular sea fleet began. Peter introduced a special naval duty, which extended to landowners and merchants. The country was mobilized to create a fleet. At the same time, related industries developed: the production of timber, iron, cannons, etc. According to the tsar’s program, it was planned to build 52 ships with 25–40 guns each (then their number was increased by another 25). New shipyards were built. In fact, Voronezh became the cradle of the Russian fleet. By 1699, most ships were built.

True, their quality was far from perfect. The landowners, united in the “kumpanism” group, cared for a formal solution to the problem, had no experience in such matters, which negatively affected the quality of shipbuilding. Therefore, the construction of ships by the kumpanisms began to be abandoned. Landowners were allowed to make a cash contribution, and ships were built at government shipyards. So, in Voronezh created the Admiralty Court. In 1700, the Admiralty Order was established, later the Admiralty Board. That is, there was centralization in the construction of the fleet. The hope of foreign specialists was justified only partially. Many of the "masters" turned out to be adventurers and deceivers, they came only for money.

Peter took an active part in the Great Embassy of 1696-1697, was looking for new allies in the fight against the Turks. But in Western Europe at this time they were preparing for the War of the Spanish Succession. Turkey, exhausted by the war and a number of heavy defeats, began negotiations. In January 1699, the Karlovitsky Peace was signed. Austria received Hungary and Transylvania, Poland returned part of the Right-Bank Ukraine, Venice secured Morea and Dalmatia. Russia concluded a two-year truce with the Turks. Peter at this time was carried away by a new goal - a breakthrough to the Baltic. In Europe, a new coalition was formed - anti-Swedish. The Russian Tsar took an active part in the creation of the Northern Union: Russia, Denmark, Poland and Saxony against Sweden.

An experienced diplomat, the head of the Ambassadorial order Emelian Ukrainians, was sent to Constantinople for negotiations. His embassy was sent by sea. In the summer of 1699, the ships Scorpio, Dissolved Gate, Strength, Fortress, Good Connection and several galleys arrived from Azov to Taganrog, the first naval base of the Azov fleet. The Russian ambassador arrived aboard the Fortress. On August 14, the Russian squadron, led by Admiral Golovin, was anchored. For four days, the ships passed the Sea of ​​Azov and approached the Kerch Strait. After some delay, the Turks gave permission to enter the Black Sea. The Russian squadron returned to the base, and the Fortress headed for Istanbul. On September 7, in the capital of Turkey, a Russian ship stood up against the palace of the Sultan. The appearance of the Russian fleet in the Sea of ​​Azov caused great surprise in Constantinople.

Peace talks lasted about a year. Porta flatly refused to give Russia access to the Black Sea. At the same time, the Western ambassadors, for example, English and Dutch, supported Turkey in this matter. The peace of Constantinople was concluded on July 3 (July 14, 1700. It was a victory for Russia. Azov and its environs (10 hours horseback riding) departed to Russia as new fortresses: Taganrog, Pavlovsk (now Mariupol), Mius. Russia returned to Turkey land in the Dnieper, but the territory was subject to demilitarization. Russia received diplomatic representation in Constantinople equal with other European powers. Moscow was freed from the old tradition of paying tribute to the Crimean Khanate. But the passage of Russian ships to the Black Sea was closed. The agreement ensured the neutrality of the Ottoman Empire in the impending war with Sweden.

Ctrl Enter
Noticed a mistake Highlight text and press. Ctrl + Enter
We are
"Eternal Peace" between Russia and the CommonwealthDiplomat and reformer. Prince Vasily Vasilyevich Golitsyn
14 comments
Information
Dear reader, to leave comments on the publication, you must to register.