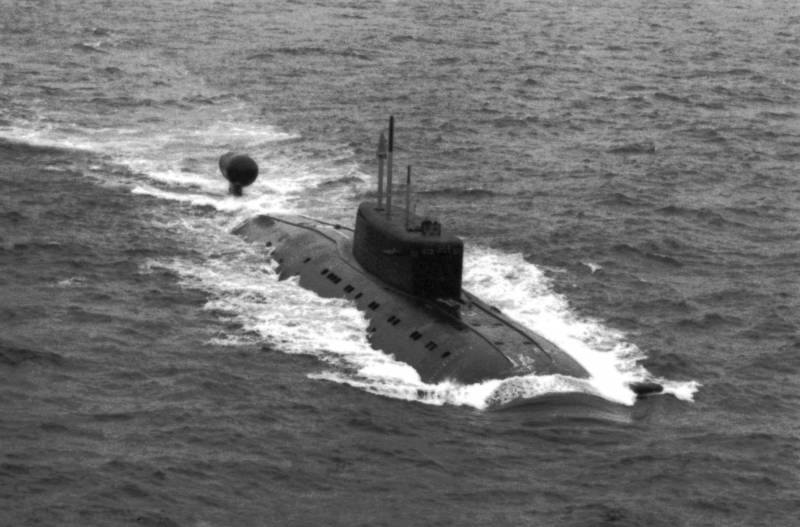 This has not happened for a long time

NATO Secretary General in an interview with media agency Redaktions Netzwerk Deutschland (RND) complained about the increased activity of the underwater fleet Russia in the North Atlantic. Statements were made along with concern about the deployment of 9M729 Novator cruise missiles, which are part of Iskander-M mobile systems. From Kaliningrad, according to Jens Stoltenberg, these missiles easily reach European capitals. Equipped with a nuclear warhead, they pose an unprecedented threat to NATO. At the same time, the secretary general realizes that now a simple calculation of the number of missiles the enemy will have nowhere: the principles of warfare are undergoing fundamental changes. In this case, Stoltenberg’s phrases about the need for dialogue aimed at new disarmament, and not at an arms race, are on duty. President Putin’s reluctance to give at least some respite to the collective West from the period of the fight against coronavirus can be called innovation.

These words made during the conversation can be interpreted in different ways, but it is obvious that Russia is also accused of pandering to the pandemic. In general, a little departing from the topic, it is worth noting the style of interviewing Stoltenberg office RND. It would seem that democratic values, especially in the field of media freedom, should have been free to German journalists and allowed to look at the issue from different points of view. However, this did not happen, and China and Russia in this dialogue were almost enemies No. 1 for the European Union. Why, for example, not ask Mr. Stoltenberg about the need for the Baltops 2020 and Dynamic Mongoose 2020 exercises in the midst of a pandemic? The fact that such large-scale maneuvers at their own borders divert a lot of resources and attention from Russia, which could be given to the fight against coronavirus. Obviously, the biased opinion of the interviewer is another sign of the notorious freedom of speech in the West. 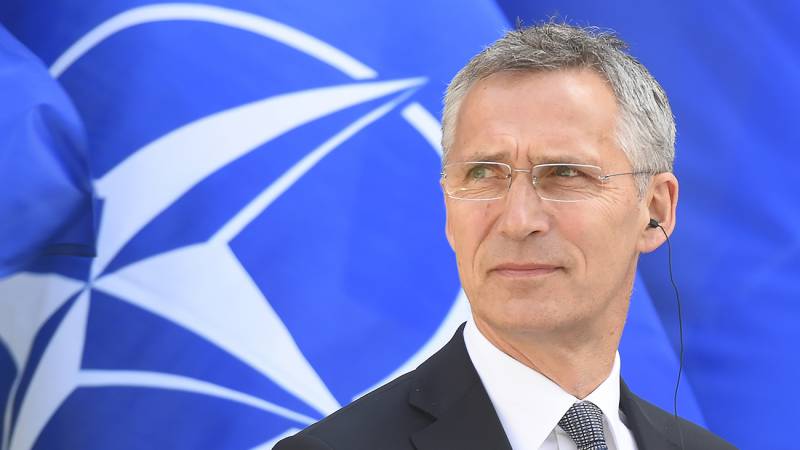 Jens Stoltenberg Source: file.liga.net
One of the reasons for NATO's special attention in Russia recently has been the large-scale submarine fleet exercises held at the end of 2019. Like any military maneuvers, the exercises were, firstly, to demonstrate the strength and capabilities of the domestic submarine fleet, and, secondly, to work out coordination in conditions close to combat. The Wall Street Journal was one of the first to analyze in detail the activities of at least 10 submarines in the immediate vicinity of NATO fleets. Here, the recent words of Vice Admiral Alexander Moiseev, the commander of the Northern Fleet, came in handy to American journalists:

“Last year, our multi-purpose submarines worked out a number of tasks with deep-sea diving in various areas of the neutral waters of the Norwegian Sea. Submariners of the Northern Fleet successfully operated in the Atlantic and the Arctic Ocean ”
.
The maneuvers of submarines become longer and extend to a large area, noted, in turn, in the command of NATO. In this connection, rhetoric about the unprecedented “underwater” exercises of Russia at the end of last year is heard more and more often in Western countries: they have not seen this since the Cold War!

What are they afraid of in the West?

NATO countries have long lived in a kind of military vacuum in their North Atlantic waters, which, as you know, are of strategic importance. The situation is changing over time. The Faroe-Icelandic anti-submarine line in general, according to the Americans, is becoming one of the goals of the Russian submarine fleet. When in October last year they tracked the exit of eight Russian submarines from the base on the Kola Peninsula, the Norwegian Broadcasting Corporation (NRK) directly accused Russia of aggression. The Norwegians felt that everything was started not in the format of exercises, but with the goal of a “military operation” to break through the anti-submarine line.

"Norwegian intelligence told NRK that Russia wants to show the United States its ability to threaten the US east coast with an air defense system that allows strategic submarines to launch ballistic missiles at targets in the United States with this operation."
Approximately these categories were thought then in NATO countries. Then really two submarines of Project 945A Condor, under the names Nizhny Novgorod and Pskov, worked out a deep-sea dive in the waters of the Norwegian Sea. Not only are the submarines, nicknamed the “submarine fighters,” quiet and quite capable of breaking through the Sound Surveillance System (SOSUS) anti-submarine line, they are also armed with new deep-sea technology. In particular, the NATO naval command has great doubts about the invulnerability of submarine cables connecting the US and Europe with information channels. According to experts from the aforementioned RND, the destruction of these cables, on which almost the entire Internet and trade in trillions of dollars depend, could become part of the hybrid war so beloved by Russia. That is why Americans are currently developing the new Affordable Mobile Anti-Submarine Warfare Surveillance System (AMASS). This mobile system will strengthen SOSUS at the Faroe-Icelandic border and will be a lot of sonar buoys scattered throughout the water area. There is another solution: the NATO fleet is increasing the number of patrol ships in the North Atlantic. 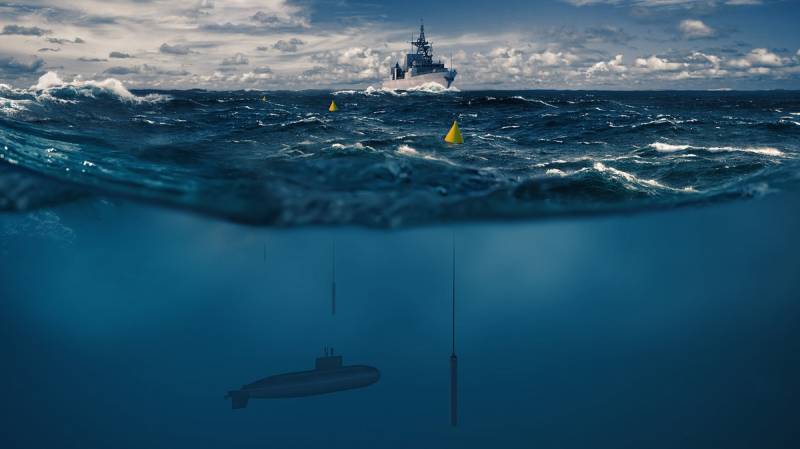 Affordable Mobile Anti-Submarine Warfare Surveillance System (AMASS). Source: militaryaerospace.com
Already, the joint naval power of Russia and China is closely approaching the influence of the US Navy. US sailors have recently considered the East Coast and the Atlantic as less secure for themselves. Especially when it comes to the upcoming armament of submarines of the Northwind class with Zircon hypersonic missiles. European and American journalists in this case, like classic "fried" hunters, frighten the public with a virtual lack of an adequate response to such a Russian threat. They are trusted and afraid. In evidence, there are pictures of the activity of the Russian and Chinese fleets in world sea waters. A colorful installation is applied to the Pentagon budget request for 2021 with the words:

“Our rivals in the global arena continue to build up their naval forces, expand their operations areas and cooperate with each other. "We need to protect much more from the sea-gaining adversaries who will soon challenge our economic security and our way of life in general."
It is not entirely clear from the figure over what period the activity of the fleets of Russia and China was taken, but the presence of domestic naval forces in all strategically important waters is quite obvious. 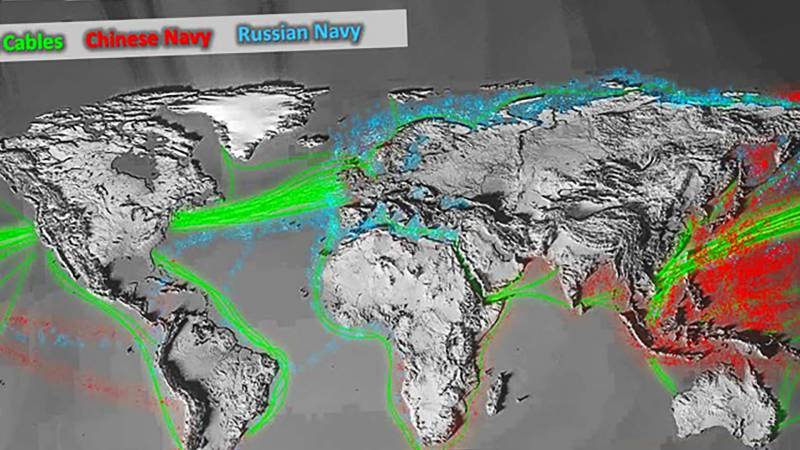 Map of the Pentagon, reflecting the military activity of Russia and China in the oceans. Source: thedrive3.imgix.net
If Europe only strengthens patrolling in the area of ​​Russian activity and warms up the public, then the Americans are ready for a symmetrical response. Demonstration of the possibilities of using nuclear weapons. The war program is called: Global Power Mission. The carriers of global power are the strategic B-52H bombers cruising over the Atlantic, as well as flying to the Kaliningrad region. Trials in February this year of Trident II ballistic missiles from the USS Maine (SSBN 741) Ohio class submarine also became part of the Russian sobering-up program. Obviously, the NATO hegemon does not intend to listen to the words of Jens Stoltenberg about the development of new concepts of disarmament.

Ctrl Enter
Noticed oshЫbku Highlight text and press. Ctrl + Enter
We are
Undisclosed details of NATO’s response to Iskander-M ammunition upgrade. In an attempt to replay the RV&ASituational analysis of the death of the MH17 flight (Malaysian Boeing 777), made on the basis of engineering analysis from 15.08.2014
Military Reviewin Yandex News
Military Reviewin Google News
33 comments
Information
Dear reader, to leave comments on the publication, you must sign in.