FFG (X) Frigate Design and Construction Program for the US Navy 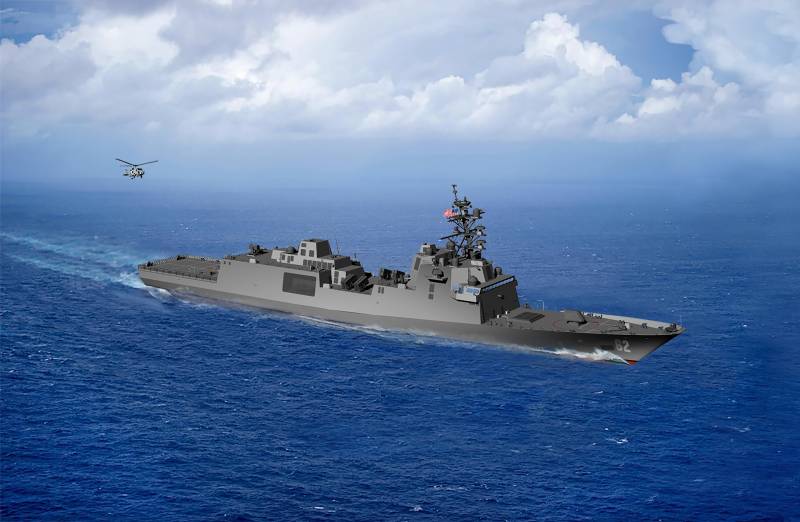 The expected appearance of future FFG (X). US Navy Graphics

After the not-so-successful LCS program, the US Navy decided to launch a new project, the purpose of which again is to create warships for the coastal and marine zones. Recently, as part of the new FFG (X) program, the competitive phase has ended, and the Navy has chosen a developer. In addition, the timing of the appearance of the new frigate and its technical features are already known.

The FFG (X) program was launched exactly three years ago - in July 2017. Its goal was to create a promising frigate capable of replacing unsuccessful ships of two LCS series in the future. The Navy plans to build up to 20 new ships by the fortieth years.

FFG (X) presented a number of requirements of various kinds. First of all, the fleet noted the need to create a new frigate based on an existing project - to reduce the cost and terms of development and construction. The minimum necessary set of equipment and weapons was also set to solve the assigned range of tasks.

By February 2018, the circle of program participants was determined. Five companies and associations with various projects have joined FFG (X). They received contracts worth $ 15 million for the development of preliminary designs, which were then planned to compare and choose the best.

Austal USA proposed a frigate trimaran based on the existing LCS Independence-class project. General Dynamics in collaboration with Bath Iron Works and Navantia (Spain) has developed a modification of the F100 project. Huntington Ingalls Industries Offers Upgraded National Guard Cutter Coast Guard Boat The American company Marinette Marine, together with Lockheed Martin, created the LCS Freedom variant of the ship, and together with Fincantieri - a modification of the "European" frigate FREMM.

In May 2019, the association of Lockheed Martin and Marinette Marine left the FFG (X) program. Shortly after this, the customer specified the requirements and received the final versions of preliminary designs. In September, the designers determined the price of their ships, after which the process of analysis and selection of the winner began.

In early April, the Minister of the Navy spoke about the possible name of the ships of the new series. The head office can get the name USS Agility (FFG-80) - “Dexterous”; accordingly, the entire project will be called Agility-class. Then the Intrepid, Endeavor, and Dauntless ships may appear (The Valiant, Swift, and Fearless). However, such names for ships are not yet approved and may change.

On April 30, 2020, the U.S. Navy announced the winner of the competitive stage. It was a project from Fincantieri / Marinette Marine based on the frigate FREMM. They signed a contract with companies to develop a technical project and build the first ship - more than $ 795 million was allocated for this. It is curious that weapons and other equipment are not included in this amount, the fleet will order them separately. With all of these expenses, the parent FFG (X) will build $ 1,28 billion. 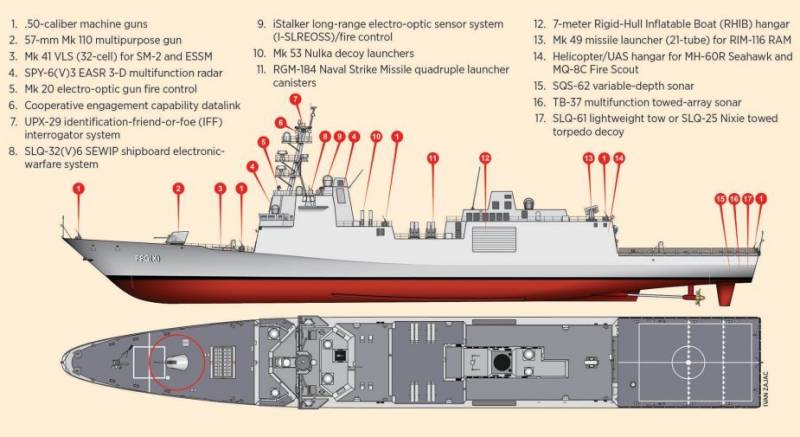 The main features of the future frigate. US Naval Institute Graphics
Under the terms of the contract, it will take about two years to complete the design and prepare for construction. The laying of the head FFG (X) will take place no later than April 2022. The delivery of the ship to the customer is scheduled for mid-2026, and it will reach initial operational readiness only in 2030.

In 2021, the Navy plans to order the construction of the first production frigate. They are going to accept him at the end of 2026 with the beginning of full service at the turn of the decade. In 2022, the first contract for two ships should appear immediately. Such contracts are going to be signed annually, up to 2030. As mass production is established, the cost of ships will decrease. So, the first serial will cost a little more than 1 billion, and the second (third in the series) will not be more expensive than 900-920 million.

The last of the 20 ships of the FFG (X) Agility-class will be completed in the second half of the thirties, and then they will enter service. The total cost of construction, taking into account design work and the purchase of equipment, will exceed $ 19,8 billion at current prices. The current contract and option involves spending $ 5,58 billion.

FFG (X) from Fincantieri and Marinette Marine is a revised version of the frigate FREMM in the version for the Italian Navy. This will be a ship with a length of 151 m, a width of 19,8 m with a normal draft of less than 8 m. Displacement - 6,7 thousand tons. A multi-tier superstructure with a characteristic profile is placed on the case of traditional contours. On it are located both a mast with antenna devices, and part of the weapons.

The use of a CODLAG type power plant is reported, but its composition is not specified. The Italian FREMM uses 4 diesel generators of 2,15 or 2,8 MW each (on different ships of the series), as well as a pair of 2,5 megawatt electric motors. There is also a 32 MW gas turbine engine. Perhaps the American FFG (X) will keep such a power plant. With its help, it will be possible to obtain a speed of more than 30 knots and a range of 6800 nautical miles.

At the request of the customer, FFG (X) receives the combat information and control system COMBATSS-21 - a derivative of the serial Aegis CIUS. The main means of the electronic complex will be the radar AN / SPY-6 (V) 3 EASR with three AFARs on the superstructure, designed to search for targets and control weapons. Navigation radar - AN / SPS-73 (V) 18 NGSSR. Requires the installation of a set of sonar systems in different designs.

On the deck in front of the superstructure is the Mk 110 gun mount with a 57 mm cannon. Around the perimeter of the deck, machine guns of large and normal caliber can be mounted to protect against small surface objects.

Before the superstructure is placed the universal vertical launcher Mk 41 with 32 cells. It will be complemented by the Mk 49 launcher with 21 RIM-116 RAM anti-aircraft missiles. On the superstructure, it is proposed to mount one or two NSM anti-ship missile launchers. The frigate’s ammunition will include a variety of missile weapons, but it will be based on missiles. 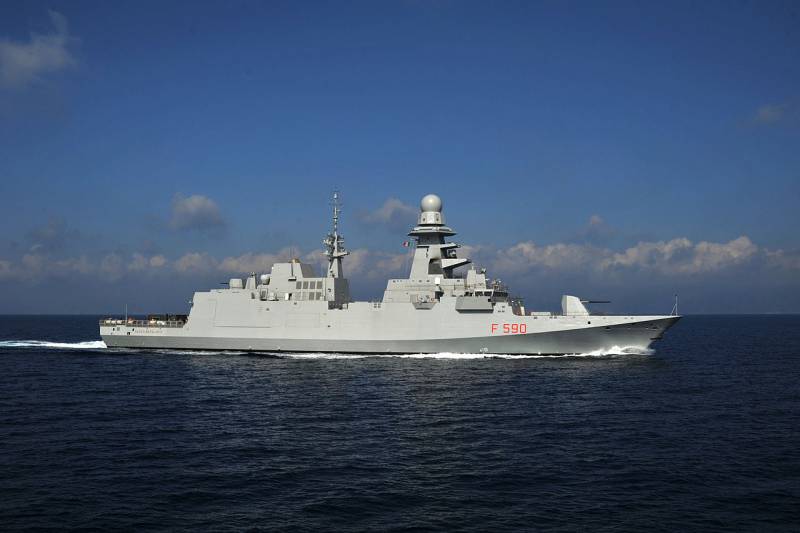 Frigate Carlo Bergamini F590 - FREMM lead ship for the Italian Navy. Wikimedia Commons Photos
FFG (X) will be able to carry one MH-60R helicopter and / or unmanned aerial vehicles such as the MQ-8C. It also provides for the transportation of a pair of inflatable boats.

The crew will include 140 people. The crew for the Agility-class is likely to be permanent and independent of tasks or staff aviation groups - unlike the Italian frigates FREMM.

According to the plans of the US Navy, promising frigates FFG (X) will have to work independently and in ship groups, in coastal and marine areas. Due to the availability of a wide range of artillery and missile weapons, they will be able to perform various functions and provide both protection of the warrant and defeat of the assigned targets.

It is assumed that the main tasks of the FFG (X) will be to participate in the air defense and anti-aircraft defense of a ship group, for which there are appropriate weapons and equipment on board. In this case, the frigate will work in a single information-control loops and exchange data with other ships. Also, the specific composition of cannon-machine gun weapons will allow you to effectively deal with small surface targets - boats and boats, including with a massive attack.

In terms of characteristics and capabilities, the Agility-class project compares favorably with the unsuccessful LCS ships for which it was created. At one time, it was argued that LCS, having a modular architecture, can receive any necessary equipment and weapons. However, it was not possible to fully reveal such a potential due to a number of problems.

FREMM-based FFG (X) is initially a “normal” surface ship without any revolutionary ideas and solutions, but equipped with all the necessary systems. In addition, the basis of the new American project is a well-mastered ship in the series and in operation. The Italian Navy already has eight such frigates, and new ones are expected.

A matter of time

In general, the FFG (X) program and the project from Fincantieri and Marinette Marine at the moment look interesting and promising. The result of this work will be the appearance of a successful and massive ship with sufficient characteristics and capabilities, but without overly bold decisions. Against the background of existing LCS, this will be a real success.

However, cash ship replacement will take place only in the distant future. The FREMM modernization project to the requirements of the U.S. Navy is still being developed, the laying of the head frigate will take place next year, and the initial operational readiness will be achieved only in 2030. Accordingly, the entire series of ships will turn into a combat-ready force in 15-20 years.

Until the fleet in the coastal zone, one will have to rely on existing and under construction LCS ships - despite all claims to them. To date, two dozen such military units have received the Navy, and their total number will reach 35 in the future. Thus, the real effect of the FFG (X) program is being delayed for a long time, and the criticized LCS project is still relevant.