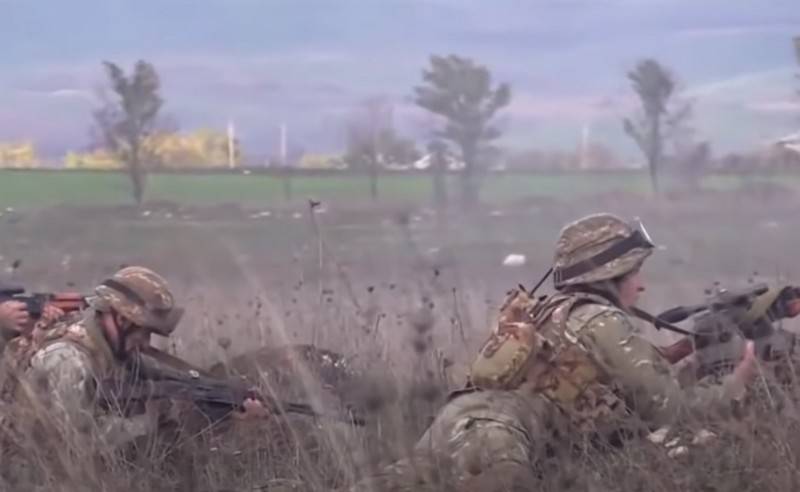 Yesterday's armed clash on the Armenian-Azerbaijani border continued. Baku accuses Yerevan of today's mortar shelling of the border village, in Yerevan they deny all charges.


The Ministry of Defense of Azerbaijan accused the Armenian military of mortar shelling of the village on the border territory. According to the Azerbaijani military, the armed forces of Armenia used 120-mm mortars to shell the territory of the village.

Armed forces of Armenia fired at a village of Agdam in the Tovuz region from 120 mm mortars. At present, the operational situation along the front line is under the control of our troops. Our troops are taking a tougher response against this provocation of the enemy
- the press service of the Ministry of Defense of Azerbaijan said in a statement.

Shelling with varying intensity is carried out from the Azerbaijani side, all enemy attempts are neutralized. Armenian armed forces do not fire at Azerbaijani settlements. Only engineering infrastructures and technical means of the Armed Forces of Azerbaijan are targeted
- stated the press secretary of the Armenian Ministry of Defense Shushan Stepanyan.

Meanwhile, the Azerbaijani Defense Ministry reported an increase in the death toll of military personnel during the armed clash on July 12. Currently, three dead and five wounded soldiers of the Azerbaijani army are reported. The Armenian Ministry of Defense continues to maintain that there are no losses on their part.

Recall that on July 12, a clash took place on the Armenian-Azerbaijani border in the Tovuz region, resulting in losses on both sides. At the same time, Baku and Yerevan were accused of escalating the conflict of each other.
Ctrl Enter
Noticed oshЫbku Highlight text and press. Ctrl + Enter
We are
Weekly summary of November 11-17 on the military and social situation in the DPR and LPR from the Mage military officerNew war in the Caucasus be?
Military Reviewin Yandex News
Military Reviewin Google News
83 comments
Information
Dear reader, to leave comments on the publication, you must to register.