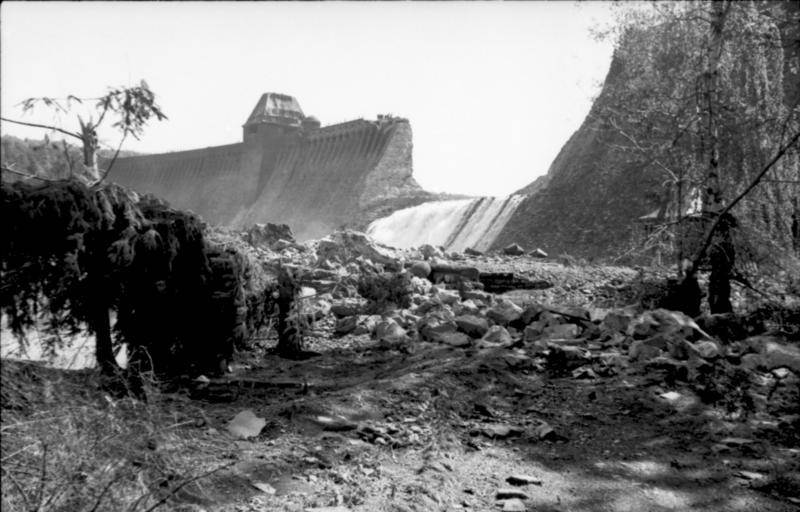 This operation of the British Royal Air Force remained in stories codenamed Chastise. The meaning of this English word is translated “punishment”, “punishment” or “flogging”.


The operation was carried out by British pilots from the 617th squadron on May 17, 1943. Subsequently, this unit received the unofficial name of Dambusters (dam destroyers) and began to be used to deliver high-precision strikes on enemy infrastructure.

With the help of specially designed “jumping bombs” they managed to break through the dams of the hydroelectric power plants on the rivers Eder and Myeon, as well as slightly damage the dam in Zorp. By the way, the dam in Myeon at that time was considered the largest in Europe.

As a result of the air raid at the hydroelectric station, about one and a half thousand people died, mostly foreign workers who were forcibly stolen to Germany. Water washed away several settlements, mines, factories and airfields of the Ruhr region. Other businesses also suffered. They were cut off from the routes of delivery of raw materials and materials, and also deprived of the supply of electricity. The breakthrough of dams adversely affected the German economy. The German war machine felt its consequences until the very end of the war.

19 British bombers took part in the bombing, of which eight did not return to base. Details of the operation are preserved thanks to the memoirs of the commander of the 617th squadron Guy Gibson. Although he died in 1944, before he reached the victory, he managed to manage to describe this very famous British air raid aviation times of the second world war. The Minister of War Industry and Armaments of the Third Reich Albert Speer, mentioning this operation, praised its negative significance for Germany:

With just a few bombers, the British came close to accomplishing their mission and achieved much greater success than when they sent thousands of planes to bomb.

The game of "pancakes"

The creator of this unique Royal Air Force operation was British aircraft engineer Barnes Wallis. The main highlight was the design of the bomb itself and the method of its use.

It was quite difficult to blow up the dam. Not only because it was durable, but also because of the protective anti-torpedo nets installed on the dams.

As told in the BBC, Wallis figured out how to get around the defense, remembering how in childhood he played "pancakes" on the shore of a pond. This game is also known in Russia. You just need to run a flat stone parallel to the water so that it bounces repeatedly, touching its surface.

The engineer figured out how to make a five-ton drum-shaped bomb slide over the surface of the water. Before dropping, a special engine spun the bomb, it, bouncing on the surface, reached the dam, and then rolled down it to the depths, touching the dam, and there it exploded. True, this principle was not disclosed in Gibson's book for reasons of secrecy.

For the idea to work, the bombs should be dropped at a precisely calculated distance from the dam and low altitude. In this case, the aircraft must move at a certain speed. To fulfill these conditions, specially designed devices were used. For example, the height was determined by the convergence at one point of two rays of searchlights mounted on the nose and tail of the aircraft.

It was necessary to fly in a straight line at a speed of 390 kilometers per hour, not paying attention to the fire of German anti-aircraft guns, at an altitude of 18 meters with bombs suspended under the fuselage. This was a difficult and dangerous task.

Preparation and implementation of the operation

To complete the mission, British-made Avro Lancaster Mk III bombers were selected. These excellent aircraft had two significant flaws. They were not able to climb to great heights, and their defensive weapons were extremely weak. But both of these minuses did not interfere with the successful completion of the task.

Lieutenant Colonel Guy Gibson, who at that time was only 25 years old, formed crews from the same as he, young, but already experienced combat pilots. They prepared for the operation for several weeks.

And finally, on May 17, 1943, this famous air raid took place. 19 “Lancaster” at low altitude in three waves moved towards the Ruhr. One of them, touching the sea surface, lost his bomb, so he had to return. Two more planes flying over the Netherlands caught hold of power lines and crashed. Another German gun shot down on the road.

And although in the end the British lost eight aircraft, they managed to achieve the goal and flood the valley.

Was the operation successful?

There is no consensus on whether the bombing can be called successful.

For example, Reich Minister Albert Speer recalled that the Germans managed to restore the dam by October 1943. At the same time, he was surprised that the British aviation did not prevent the restoration work, which was much easier than breaking through the dams.

On the other hand, the bombing did not harm the enemy’s manpower, but led to the death of prisoners of war and forced laborers driven from all over Europe.

The purpose of the air raid was completely different. The task was to drain the water from the reservoirs, drain the shipping channels, cut off the supply of electricity to the enterprises. In other words, the British planned to paralyze the work of the German war industry.

And for some time they succeeded, and in the conditions of warfare it meant a lot.

Be that as it may, Guy Gibson and the other pilots from the 617th Royal Air Force squadron did everything possible to bring the victory over the Nazis closer. At least that's what the Western press writes. Lieutenant Colonel Guy Gibson then managed to stay alive. But the very next year he died in an air battle. And the squadron headed by him went down in history under the name "Dam Destroyers".

Ctrl Enter
Noticed oshЫbku Highlight text and press. Ctrl + Enter
We are
Diplomats of the People's Commissariat of Defense: on the eve and during the warNight of heroes
Military Reviewin Yandex News
Military Reviewin Google News
44 comments
Information
Dear reader, to leave comments on the publication, you must to register.