August 4 2012
22
In the US, they are working on the creation of an aircraft that can fly at a speed of 20 times the speed of sound. Military theorists believe that the use of hypersonic technology in combat aircraft can make a revolution, which at one time made the technology "Stealth". In addition to speeds of greater or equal speeds in 5 Mach, hypersonic aircraft will be able to perform maneuvers using aerodynamic forces, as well as plan for a longer distance than traditional aircraft, as the planning process in this case becomes "dynamic." Active attempts to create full-fledged hypersonic aircraft have been made for almost 50 years (in the USSR, it was the Spiral project), but so far there has been no real success in this direction.

Known for its generally futuristic projects, the United States Agency for Advanced Defense Science and Technology (DARPA) had already failed the test flights of the HTV-2 unmanned aerial vehicle Falcon Hypersonic Technology Vehicle twice a year before last. Both times this drone made an "unplanned controlled descent into the ocean."

Hypersonic airframe called HTV-2 - Falcon Hypersonic Technology Vehicle, developed and tested by renowned company Lockheed Martin under the auspices of the Pentagon Advanced Research Programs DARPA, was designed to move in the upper atmosphere at a speed that would exceed speed sound in 20 times. The first tests of this unit began on April 22 2010 in the United States at the Vanderberg Air Force Base, located in California. The Minotaur IV launch vehicle successfully brought the test apparatus to the calculated point, after which the hypersonic glider separated from the rocket and set off on its own independent flight.

Soviet project of the hypersonic plane "Spiral"
During the test flight, the HTV-2 was to be controlled by the autopilot and perform a series of maneuvers, such as turns, rotation, and others. However, after 10 minutes from the beginning of the independent flight of this unit, all ground tracking stations and control satellites initially lost the telemetry signal from the HTV-2, and later the connection with the aircraft was completely lost.

After losing the connection, the device was still in the air for about half an hour, having covered the distance in 6 500 km during this time. After which the test Falcon HTV-2 fell into the sea and drowned. The causes of the accident apparatus remained unexplained. The accident with the Falcon HTV-2 aircraft jeopardized the second stage of testing that was supposed to take place in the 2011 year, but the tests did take place.

Strangely enough, the second Falcon HTV-2 aircraft, which was sent on an 11 flight in August 2011, reiterated the fate of its predecessor, albeit with some differences. As in 2010, the launch was carried out from the US Air Force Base Vanderbeng. The delivery of the device to a low near-earth orbit took place without incident, after which it separated from the launch vehicle and began a downhill descent to the earth's surface. At this time, the device was supposed to exceed the speed of sound in 22. The total flight time should have been about 30 minutes, during which time the unit should have traveled 6600 km from the separation point from the Minotaur IV rocket. 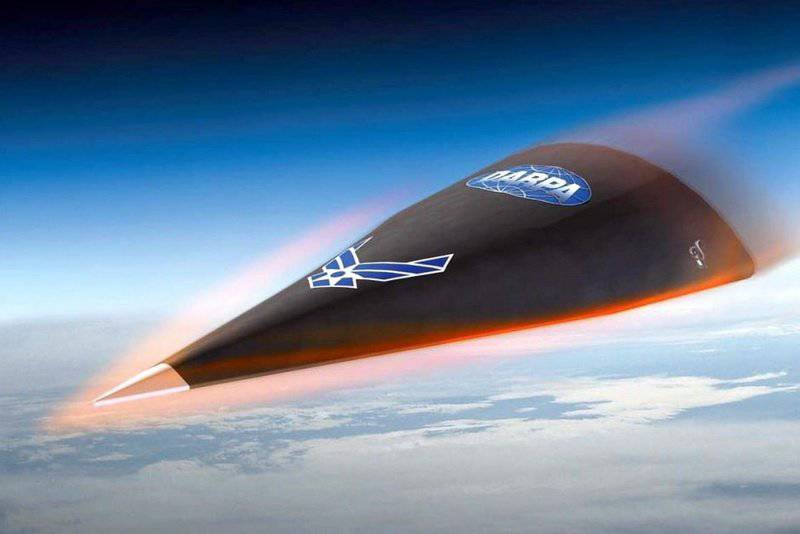 HTV-2 - Falcon Hypersonic Technology Vehicle
After the first unsuccessful tests in 2010, thorough studies were carried out, which included studies of the shape of the apparatus in the wind tunnel. Upon completion of these tests, a number of changes were made to the design of the HTV-2 hypersonic glider, which were designed to ensure a reduction in the thermal load on the body of the device and flight stability. However, it appears that the measures taken were not enough. With 9, with a few minutes of independent flight, communication with the hypersonic device was lost. As a year earlier, the device completed its flight as well as its predecessor.

Despite another setback, the agency DARPA tried to present everything that happened on the positive side. Agency Director Regina Dugen said that DARPA will learn from its mistakes and will not stop developing in this direction. The following tests, which DARPA organized on November 18 on 2011, were more successful than the previous ones. Then a new planning hypersonic combat unit AHW - Advanced Hypersonic Weapon or "Advanced Hypersonic weapon”Made a flight and, in 30 minutes, traveled 3 500 km. Along a non-ballistic trajectory, planning to a calculated point not far from Kwajalein Atoll on the Marshall Islands.

At present, the Pentagon’s promising research programs are continuing to work on creating hypersonic weapons and aircraft systems that are capable of reaching any point on the globe in an hour of flight. Not so long ago, the agency announced the launch of the next project under the Integrated Hypersonics program. This program will be based on the experiments and the result of all previous tests and studies. The project involves the creation of a hypersonic X-plane - HX hypersonic aircraft, which should be prepared for testing in the 2016 year. 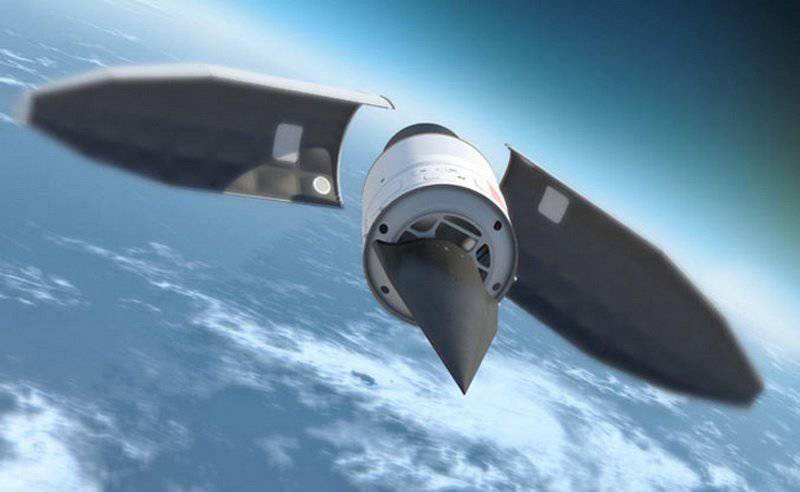 HTV-2 - Falcon Hypersonic Technology Vehicle
In a published press release entitled “Hypersonics - The New Stealth,” DARPA reports that new hypersonic speed flights will be the technology that fundamentally “changes all the rules of the game” in the field aviationthat have been formed over the past few decades. At the same time, the Integrated Hypersonics program description and the press release issued by DARPA contain an insignificant amount of technical data related to the promising HX aircraft. But even in these documents, attention can be paid to the phrases: "rocket engine, the use of which will help to ensure high maneuverability in hypersonic flights", "self-healing design of the next generation."

Such scant information presented leaves a large number of questions unanswered, especially if we take into account the not very positive experience that Americans have already received when trying to implement the Falcon Hypersonic Technology Vehicle project (HTV-2). It should be noted that the technical implementation of the Hypersonic X-plane - HX project will encounter even more difficulties, primarily technical ones, than the implementation of HTV-2 projects. The main difficulty lies in the fact that any aircraft that moves in the air at a speed of about 24 thousand km / h is exposed to the strongest thermal effects. The surface temperature of the apparatus can reach 2000 degrees Celsius.

Currently, after a not quite successful test series, the DARPA agency plans for a relatively new hypersonic HX aircraft seem very fantastic, and before the HX aircraft can go to the field at a speed 20 times faster than the speed of sound, it will take quite a long time . In order to proceed to the first stage of the implementation of the Integrated Hypersonics program, the Agency for Advanced Defense Science and Technology plans on August 14 2012 to hold a press conference at which some details about the technical component of the project will be announced. Also within the framework of the conference it is planned to hear presentations from representatives of leading manufacturers of space technology, who will share their options for developing a new hypersonic aircraft.