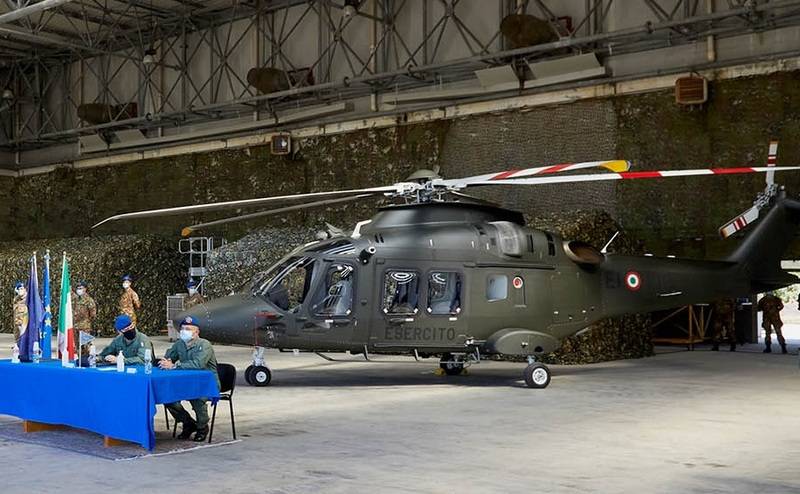 The Italian army received the first AW169 training helicopter from two ordered under the contract of the Italian Ministry of Defense on December 20, 2019. The helicopter was delivered in the commercial configuration ABC (Addestratore Basico Commerciale) as a training one and received the military designation UH-169B.


Both helicopters UH-169B (the second will be delivered soon) will go into service with the 2nd Army Regiment aviation "Sirio" Italian Ground Forces based in Lamezia Terme (Calabria). These machines will undergo training for the flight and instructors for the multi-purpose AW169MA (Multiruolo Avanzato) helicopters planned for the serial delivery of the Italian army aviation under the program of the new light multi-purpose helicopter Light Utility Helicopter (LUH).

As part of the LUH program, the Italian Ministry of Defense signed a contract in April of this year for the supply of the first 15 new AW169MA helicopters for the Italian army with delivery in 2022-2023.

The commercial helicopter AW169 has been serially produced by AgustaWestland (now Leonardo Helicopters as part of Leonardo) since 2015. Maximum takeoff weight - up to 4850 kg, equipped with two Pratt & Whitney PW210A turboshaft engines with takeoff power of 1000 hp each. and is capable of carrying up to 7-10 passengers. To date, about 100 commercial vehicles have been delivered, and the total order book was more than 220 units.

It is noted that this is not the first order of a commercial AW169 helicopter. In the “militarized” modification of 22 AW169 helicopters, the Italian Finance Guard (Guardia di Finanza) ordered in November 2018, the Argentinean gendarmerie ordered another helicopter.

Ctrl Enter
Noticed oshЫbku Highlight text and press. Ctrl + Enter
We are
Rating of the most significant contracts of Russia for the export of drug products concluded in 2012The 20 rating of the largest arms deals, decisions on which were made in 2012
Military Reviewin Yandex News
Military Reviewin Google News
2 comments
Information
Dear reader, to leave comments on the publication, you must sign in.