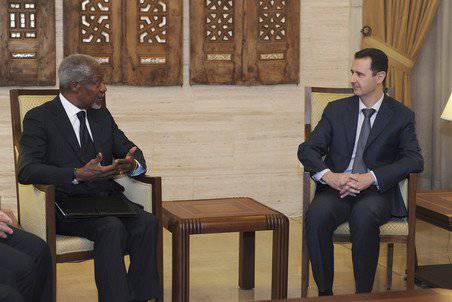 It would seem that 13 years have passed since the NATO bombing of Yugoslavia. However, people still continue to die through the fault of the Nato-Fascists, who organized the barbarism. During the clearance of the unexploded NATO bomb in southern Serbia, two sappers were killed. It was a cluster bomb killer. And how much more explosives lie in the long-suffering Serbian land! Already after the bombing, more than 200 people died from it. Who allowed this barbaric military operation, which continues to kill people after so many years?


One of those who did not even try to stop the hand of the aggressors then was the then UN Secretary General Kofi Annan.

And this year, the world community commissioned him as a new mission - the UN special envoy to resolve the conflict in Syria.

At first, it would seem, his mission had a chance of success. She was supported by the UN Security Council, Russia and China actively assisted her, and she accepted the proposals of Annan and the Syrian leadership. And in April, even a brief and fragile resemblance of a truce was established.

But ... that's it, what's the similarity? Why did this happen?

Imagine the unlucky cook: he put the pot on the stove, poured water, added salt and sugar, and stirred diligently. But nothing comes out of him - he forgot about the most important thing - to put cereals.

So the hapless peacekeepers "forgot" about the most important thing, without which the settlement is impossible: that the truce must concern both sides!

All this time we have heard in the west heart-rending cries that “it is necessary to increase pressure on the government of Bashar al-Assad in order to force him to fulfill Kofi Annan’s peace plan.” But, unfortunately, I have never heard: “We need to influence“ the Syrian free army so that the rebels fulfill Kofi Annan’s plan ”.

Always, no matter what happens in Syria, whether supporters or opponents of the government, ordinary civilians who are not involved in politics, or foreign journalists died - the West accused only one side - the leadership of Syria. It even went so far as some zealous media blamed Bashar Assad for the death of their closest associates on July 18. True, the United States did not support this version, and the State Department spokesman later even stated that he agreed with the suicide bomber who committed this.

But not one of them has ever condemned any bloody atrocities committed by “fighters for democracy,” even if they themselves took responsibility for their attacks. Like, they can, they are fighting for freedom.

So how can you hope for the implementation of any peace plan, if there is a game with only one goal, if only one side is forced to the world? Does the other side receive support - informational, political, and moral? It is clear that with such a "peacemaking" porridge can not be cooked.

So, what was the Annan plan and who tried to fulfill it?

The plan consisted of 6 points:
1) on the immediate cessation of violence by the government and opposition forces;
2) on the organization of the process of monitoring the situation in the country;
3) unimpeded delivery of humanitarian aid;
4) on the support of the mission of the UN Special Representative and the League of Arab States Kofi Annan;
5) on the unacceptability of external interference in the internal affairs of Syria.
6) about the beginning of a broad national dialogue

1. The Syrian government has abandoned offensive operations against the rebels. The army had hands tied. And the terrorists continued their attacks on the soldiers and civilians - and there were more than 4 thousands of such cases of violation of the Annan plan by the rebels.

2. Syria hosted an observer mission. They were met here as friendly as guests. They were settled in the best hotels of Syria, and the soldiers, often risking their own lives, provided them with security. While the rebels several times subjected observers shelling. For example, when in the beginning of June, in the province of Hama, the rebels tried to arrange a provocation, the “second Hulu” - to massacre and blame government forces - observers who tried to come there to assess the situation - the rebels were shot at. After all, they were counting on a lightning success of provocation and did not want the lie to be exposed too quickly. Observers were also attacked in other areas - I personally saw the UN mission in Homs and the burned-out UN car in the Midan quarter — the rebels did, while the army defended and protected the observers - it was responsible for them.

3. As for humanitarian aid, Syria allowed the Red Cross mission to problem areas, but again, too often the mission was attacked by insurgents, particularly in Homs.

4. Kofi Annan himself was very hospitable to Syria - he was received several times at the highest level, by the President of Syria. He gave a press conference in Damascus, he was given all the conditions. His mission was welcomed by the leadership of Syria, despite the fact that it created many problems for the Syrian army. The rebels, from the very beginning, hesitated for a long time before at least formally accepting his plan, then, gritting their teeth, were forced to do so, but constantly stated that they refused to carry it out, under various pretexts.

5. Despite the fact that the unacceptability of foreign intervention is contained not only in the Annan plan, but is an inviolable pillar of international law, it is the forces hostile to Syria who blatantly violate this principle, supporting the Syrian militants, putting constant pressure on the Syrian government, introducing stifling sanctions. And the rebels, knowing that the people do not support them, and therefore they have no chance of defeating on their own, call on the West to introduce a no-fly zone over Syria. Just like in bled blood of Libya.

6. The Syrian Government welcomes the national dialogue. A new constitution was adopted in a nationwide referendum. Parliamentary elections held on a multiparty basis. Two representatives of the opposition entered the government - Kadri Jamil and Ali Haydar. These are those oppositionists who did not run through the bushes with machine guns and did not sit out in Turkey and Paris. These oppositionists waged a political struggle in their homeland, by legal means. But Western-backed rebel terrorists are not satisfied with such opposition. They killed the son of Ali Khaydar for the fact that the politician agreed to participate in the elections. And these scumbags from the very beginning were not going to conduct any negotiations, they openly declare that they need the head of Bashar al-Assad.

As we see, all the points of Kofi Annan’s plan strictly followed the Syrian leadership and refused to carry out “freedom fighters”.

And why did they refuse to carry out the plan, supported by the UN Security Council? So, they sensed the support of powerful forces, otherwise where did such self-confidence come from?

Of course, in such circumstances, the Annan plan could not work. The United States and Western countries, which formally supported the plan, agreed to this not without Russia's participation, from the very beginning expressed skepticism about him - but they wanted and want to blame for their breakdown not on their militants, but on the legitimate President of Syria.

Russia’s regrets about leaving Annan (first by V. Churkin and then V. Putin himself) were expressed by the Ministry of Foreign Affairs of Syria, which accused the state of Annan’s mission of hindering the situation in the country.

And what voices in connection with this sound in the West?

The White House did not find anything better than ... blaming Russia, China and Bashar Assad for disrupting the mission of Annan.
Assad is guilty of not being surrendered to the mercy of the rebels and the forces behind them. Well, Russia and China are to blame for not allowing a new “crusade for democracy” to be launched yet and not giving permission for breaking another country with Tomahawks and cruise missiles.

In one of the previous articles, I wrote about the release of Italian citizens abducted by gangsters by the Syrian army and wondered if the Italian ruling circles would show elementary gratitude for saving the Italians? The answer did not hesitate to wait: Italian Foreign Minister Giulio Terzi said that “Annan’s departure confirms the need for pressure on Bashar al-Assad.” Although the same minister thanked the Syrian army for saving the abducted Italians, from whom, by the way, the “revolutionaries” took away all the property, everything that they had earned in a few years of a contract in Syria. Mr. Terzi, why don't you declare the need to put pressure on the so-called "opposition"?

The French ruling circles that were actively inciting the conflict in Syria were also quick to join the general chorus: the permanent representative of France to the world organization, now the chairman of the Security Council, Gerard Aro, said that in his opinion the mission of observers should be curtailed. And this may mean that the supporters of military intervention will untie their hands.

Kofi Annan, who was out of Pilate’s hands and washes his hands, finally said that Assad “will have to leave sooner or later.”

Mr. Annan, we all have to leave once, and not only from the post, but someone leaves with his head held high, and someone - bent over, "with a tail between his legs."

Unlike the chairman of the previous mission - the observation mission of the League of Arab States of Sudanese General Ahmad Dhabi, who gave an honest report and was dismissed by Qatar pressure on Sudan - Kofi Annan could not leave with dignity and name the true culprits of his failure.

The people of Syria are concerned with the departure of Annan restrained and almost indifferent. Here people are worried about completely different problems. Here is your grief. After all, the rebels continue to kill, they do it every day, killing both the military and civilians. So, they shot one of the best civilian pilots aviation Syria, Feraz Asafi. This happened when he was driving along the road from the airport to Damascus. The terrorists ambushed. This is another bloody act from their plan to destroy the best national cadres ...

And yesterday, an attack was made on the Palestinian Yarmuk camp in a suburb of Damascus. The terrorists coolly opened fire on people. Killed 12 people, dozens of injured. This is revenge for the Palestinians not supporting the insurgency.

And in the village of Al-Khajeb, Aleppo province, an almost curious incident occurred. The rebels tried to undermine the building of local government. But one of the improvised explosive devices detonated at the time of its installation. There was an explosion, which killed all the unlucky bombers. Fortunately, there were no people in the building, and therefore, apart from the bandits, there are no dead. But the building suffered a lot of material damage.
And so every day: explosions, abductions, murders ... So many ordinary Syrians hope that as a result of Annan’s departure, the army will have more “hands free”, and it will be able to more resolutely fight terrorism. And compared to this, even the threat of external aggression fades.