Landing ships of the Russian Navy will go to Syrian Tartus 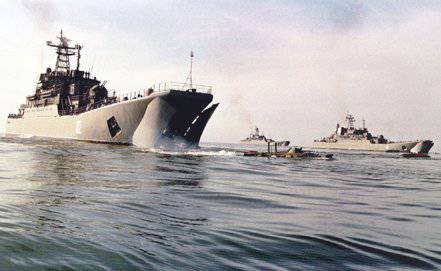 ITAR-TASS. Large landing ships / BDK / Northern fleet from the composition of the United Inter-Navy Group of the Russian Navy, located in the Mediterranean Sea, in the coming days they will go to the logistics point of the Russian Navy in the Syrian port of Tartus. This was announced today to reporters by a source in the General Staff of the Armed Forces of Russia.


"It is planned that at the end of this - the beginning of the next week, three BDKs of the Northern Fleet - Alexander Otrakovsky, George Pobedonosets and Kondopoga - will visit Syria with marine units on board. Due to the limited capabilities of the mooring infrastructure of Tartus, two ships will enter directly to the port and will be at the pier, and the third will drop anchor in his raid, "said the agency interlocutor.

"Onboard each BDK there is a reinforced company of marines numbering about 120 people with regular small arms - machine guns, machine guns, grenade launchers, flamethrowers, as well as military equipment - floating armored personnel carriers ensuring their operations on the sea coast", - informed the source.

"Our ships will enter Tartus to replenish their stocks. They will stay there for several days and then head for the northeastern part of the Mediterranean Sea, so that after passing the Black Sea straits, on August 12 enter the Black Sea and arrive at the naval base Novorossiysk, "the source said, without specifying whether Russian marines would remain in Tartus to ensure the security of the logistics point.

"Currently, these three BDKs in the United Inter-Fleet Grouping of the Navy are located in the eastern part of the Mediterranean Sea, on the day of the transition from Tartus," the source said.

According to ITAR-TASS, the Office of the Press Service and Information of the Ministry of Defense of the Russian Federation, on Thursday, 2 in August, the United Inter-Fleet Group of the Navy started to perform tasks in the eastern Mediterranean. It operates as part of the squadron of warships / OBK / Northern Fleet - BDK "Alexander Otrakovsky", "George the Victorious", "Kondopoga" and the Baltic Fleet OBK - patrol ships "Yaroslav the Wise" and "Fearless."
On Tuesday, 31 July, the Defense Ministry’s Press and Information Office informed that warships of the Northern Fleet stationed in the Mediterranean as part of the United Inter-Fleet Group of the Russian Navy, on August 12 for the first time after a long break will enter the Black Sea and will visit the Novorossiysk military marine base.

“The Turkish authorities informed the Russian military ships through the Black Sea straits / Bosphorus / Dardanelles / diplomatic channels about the planned 11-12 aisle,” the military department said. "Alexander Otrakovsky", "George the Victorious" and "Kondopoga" - fully corresponds to the order defined by the Montreux Convention / on the total displacement of a detachment of ships at the time of passage of the Black Sea Strait / ".

"A visit to the Novorossiysk base by a squadron of warships of the Northern Fleet is one of the tasks of the long-range ocean voyage of the group, carried out with the aim of making an inter-fleet transition.

Inter-fleet transitions of warships in the last 10 years are common practice in combat training of the Russian Navy. At various times, the inter-fleet transitions were made by the Peter the Great heavy nuclear-powered missile cruiser / from the North to the Pacific Fleet /, the Moscow-based Guards missile cruiser / from the Black Sea to the Pacific Fleet /, and the Tomsk multi-purpose nuclear submarine / from the North to the Pacific fleet /, recalled to the Ministry of Defense.
Ctrl Enter
Noticed oshЫbku Highlight text and press. Ctrl + Enter
We are
Russian amphibious ships will visit the Syrian port of TartusThe Ministry of Defense of the Russian Federation denied the information about the evacuation of personnel from a military base in Syrian Tartus
Military Reviewin Yandex News
Military Reviewin Google News
50 comments
Information
Dear reader, to leave comments on the publication, you must sign in.