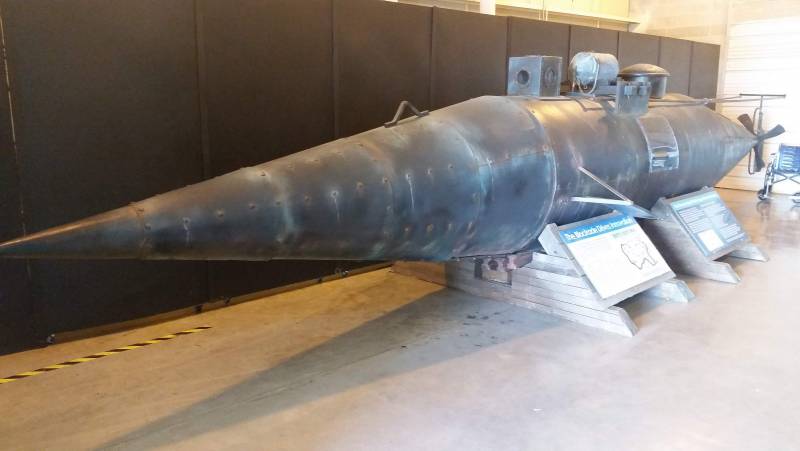 During the Civil War in the United States, both sides of the conflict tried to create new types of weapons and equipment, and did not ignore the submarine fleet. In the shortest time, several submarines of various kinds were created, and the Confederates were especially distinguished in this matter. They were the first to conduct a real combat operation using a submarine - it was the ship HL Hunley.

Enthusiasts get down to business

In the prewar period, the possibility of building a submarine capable of covertly approaching a surface target and delivering a subversive charge to it was actively discussed in technical circles. Work on a real model of this kind for the KSA Navy started at the end of 1861 - almost simultaneously with the development of the future USS Alligator submarine for fleet Union.

The main enthusiasts of the submarine fleet in the United States were Horace Lawson Hanley (chief designer), James McClintock (chief sponsor) and Baxter Watson from New Orleans. At the end of 1861, they developed and laid the experimental submarine Pioneer. In February 1862, the boat began to test on the river. Mississippi, and these events took about two months. However, at the end of April, the enemy offensive forced the designers to flood the Pioneer and leave the city. 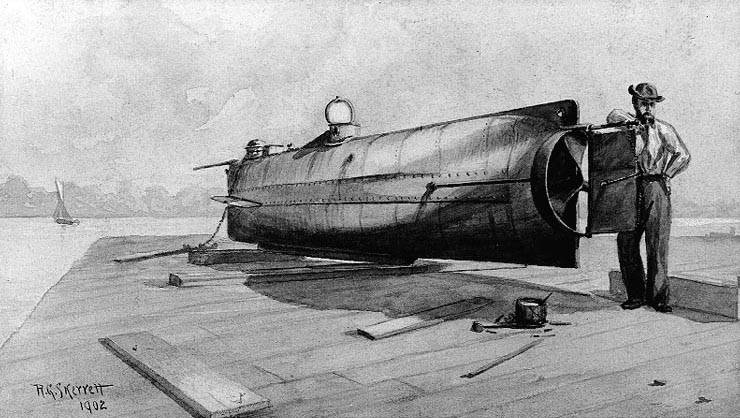 Submarine HL Hunley performed by artist R. Skerett, 1902. Picture from the archives of the Naval Historical Center / history.navy.mil
Enthusiasts moved to the city of Mobile (Alabama) and began work from scratch. Using the experience of the previous project, they constructed an improved boat Pioneer II or American Diver. Due to numerous delays, the "American diver" was launched only at the beginning of 1863.

After tests lasting several weeks, they decided to use it in a real operation. The submarine was supposed to secretly approach one of the enemy ships that participated in the naval blockade of Mobile, and undermine it. However, this plan could not be implemented. Even at the stage of entering the operational area, the submarine was damaged and sank. The crew escaped, but the recovery and recovery of the ship was considered inappropriate.

After two failures, only one of the founders, H.L., remained in the enthusiastic team. Hanley He decided to continue working, and soon another project appeared. Initially, the third submarine carried harmless working names such as Fish Boat ("Fishing Boat") or Porpoise ("Porpoise"). Later, she was named for the developer - HL Hunley. However, the boat was never officially accepted as part of the Navy, which is why it did not receive a CSS Hunley type designation.

The scheme of the submarine. Figure Naval Historical Center / history.navy.mil
"Hanley" had a very simple design, even against the background of its predecessors. It was a single-hull submarine with a sturdy boiler-iron hull. The body had a cross section close to elliptical. The fore and aft ends were made in the form of fairings. On top of the boat there was a pair of turrets with hatches, on the sides - depth wheels, aft - a propeller and rudder. Product length did not exceed 12-13 m with a maximum width of less than 1,2 m and a height of 1,3 m. Displacement - approx. 6,8 tons

In previous projects, H. Hanley and colleagues worked on the possibility of using various engines, but eventually abandoned them. All of their submarines received a “manual” power plant. Along the central part of the hull was a crankshaft that the submariners were supposed to rotate. Through gear, he connected to the propeller. Such a system was notable for simplicity, but did not allow to obtain a speed of more than 3-4 knots.

Depth control was carried out using the side steering wheels. The submarine carried dumped ballast on the bottom - in an emergency, you could get rid of it and quickly emerge. The strength of the hull allowed you to dive only a few meters. 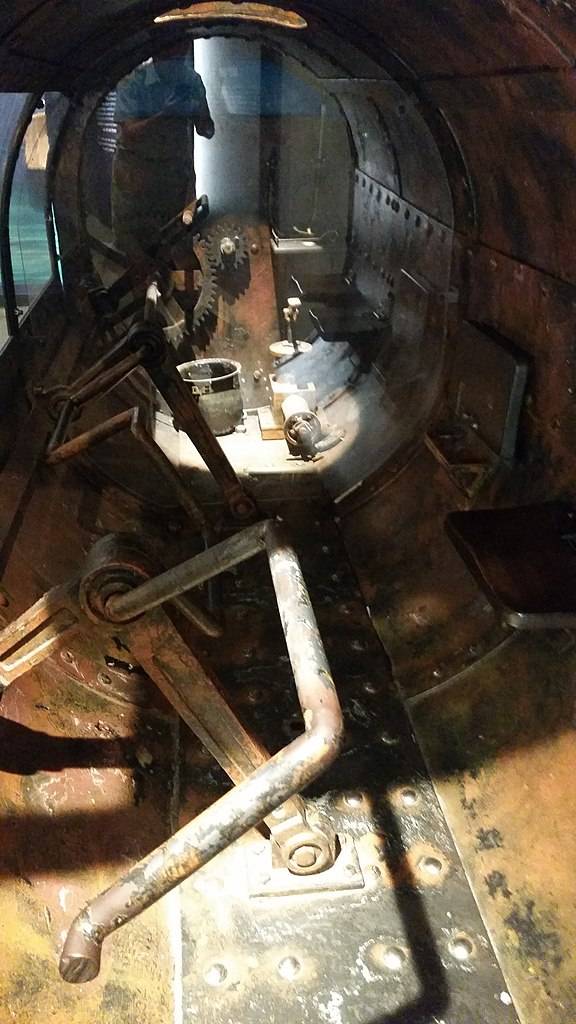 The interior of the modern replica Hanley, view of the stern. The crankshaft and the simplest gearbox are clearly visible. Wikimedia Commons Photos
The crew consisted of eight people. Seven had to work with the crankshaft and provide movement. The eighth was the commander and the helmsman. He was also responsible for building the combat course and carrying out the attack.

Initially, the "Fishing Boat" was supposed to carry a towed mine on a cable. It was assumed that on a combat course the submarine would have to sink and pass under the target. In this case, the warhead will remain near the surface and will hit the enemy ship. However, this scheme was not reliable enough, and they decided to equip the submarine with a pole mine. It was a copper container with 61 kg of black powder, suspended on the 6,7th pole. It was possible to dump mines with subsequent remote detonation using a cable.

Construction of the future HL Hunley began in early 1863 in Mobile, and in July the ship was launched. The first checks were successful, including target ship training attack. The fighting qualities of the submarine were demonstrated to the command of the KSA and received good reviews. Shortly thereafter, the Hanley was transported by rail to Charleston, South Carolina, for further testing and development of combat use. 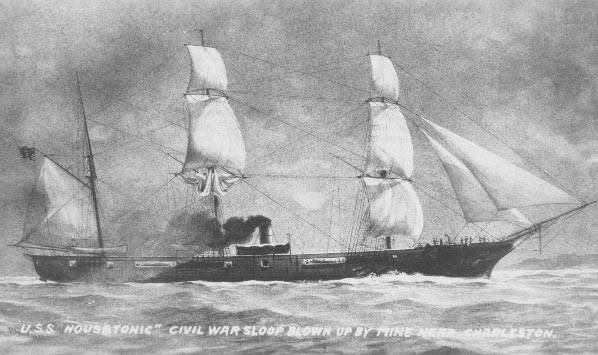 USS Housatonic Dinghy Figure Wikimedia Commons
Naval tests were carried out by a crew of volunteers led by Lieutenant John A. Payne. Supervision and support by H.L. Hanley and his colleagues. The first trips to the sea were successful, and now diving became the main task. Such a test was planned for August 29.

An accident occurred while preparing to dive. During horizontal movement on the surface, the boat commander accidentally stepped on the depth rudder control lever. The ship began to sink, and through the open hatches, water began to flow into the hull. In a matter of minutes, the submarine sank. Lieutenant Payne and two sailors were able to escape, the remaining five died. 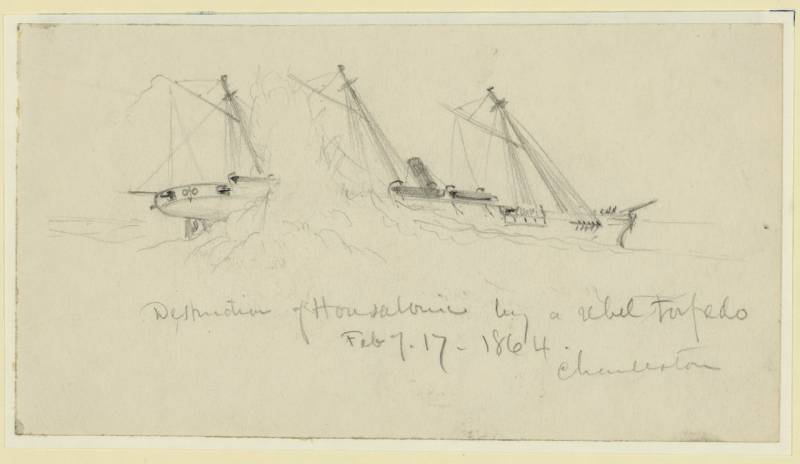 Attack on the USS Housatonic sloop. Drawing by William Wade from the Library of Congress collection, 1864
Soon, HL Hunley was raised, the dead submariners were buried. After some preparation, the boat was again taken out for testing. Until a certain time they passed without problems. October 15, 1863 conducted a training attack in the water. This time the crew was headed by H.L. Hanley While reaching the target, the submarine began to draw water and sank, taking the entire crew to the bottom, including its creator.

The ship was too valuable to be left at the bottom. The submarine was again raised and repaired, and then brought back for testing. Fortunately, in the following events, there were no casualties or material losses. Given the tragic experience, the Confederates were able to work out the issues of driving and combat use of a new model. Now it was necessary to organize a real military operation.

On the evening of February 17, 1864, the Hanley submarine, under the command of Lieutenant George E. Dixon, secretly left Charleston Port and headed for the 1260-ton USS Housatonic Sailing and Steam Sloop, which participated in the city’s naval blockade. The combat mission was simple - deliver a pole-mine to an enemy ship, detonate it and secretly return to the port. 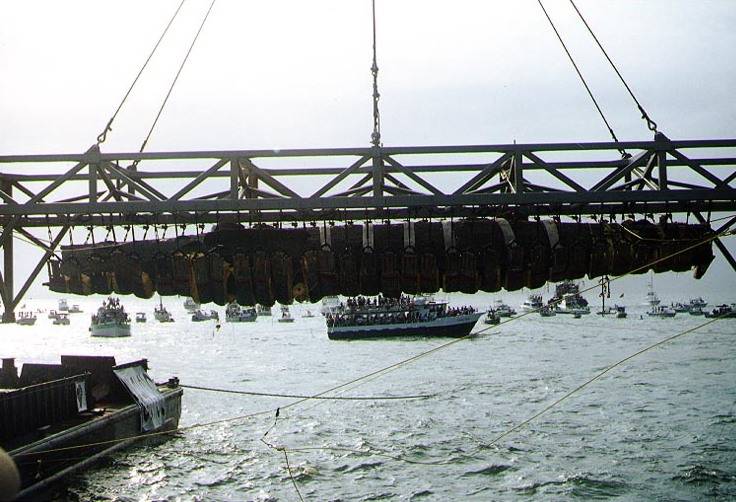 Rise of a sunken submarine, August 8, 2000. Photo by Naval Historical Center / history.navy.mil
Confederate submariners were able to establish a charge on board the sloop and lay on the reverse course. As a result of a mine explosion, a large hole appeared on board the USS Housatonic. In a matter of minutes, the ship scooped up water and sank. Five crew members were killed, dozens were injured and injured.

Shortly before the explosion, a light signal from a submarine was seen on the shore. Her crew reported successful charge installation and soon returning home. However, HL Hunley never returned. Thus, the Hanley became the first submarine in the world that successfully completed a combat mission and sank a surface ship, and at the same time was the first to fail to return from the campaign.

At the crash site

The search for the exact location of the death of HL Hunley and the crew of J. Dickson lasted long enough and ended only in 1995. The ship was only a few meters from its own mine, which undermined the USS Housatonic. A study of the remains of the boat on site allowed us to draw some conclusions and offer certain versions. 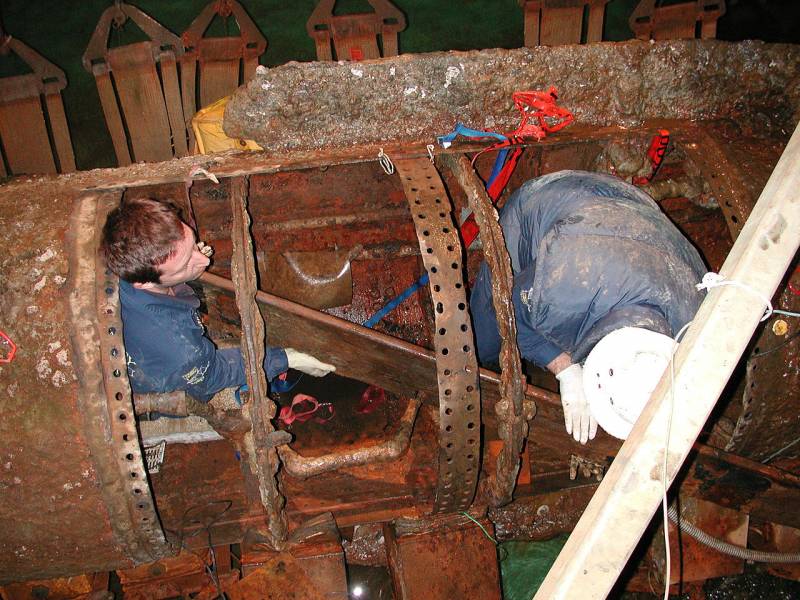 Restoration work, 2005. Photo by Naval Historical Center / history.navy.mil
In 2000, the wreckage of the Hanley with all the precautions raised to the surface. The remains of the crew were buried after the examination. The submarine was sent for conservation, and a few years later they completed restoration and conservation. Now the boat is in the separate exhibition pavilion of the Warren Lasch Conservation Center (North Charleston), available for excursions. To avoid damage, it is stored in a pool with a stabilizing solution. A copy is also built that does not require special conditions and therefore is in an open exhibition.

Numerous examinations, studies and experiments ultimately made it possible to establish the cause of the death of the submarine. HL Hunley did not have time to retreat to a safe distance, and when the mine exploded, she took on the shock wave. After passing through the water, the hull of the boat and the air inside it, the wave weakened a little - but even after that it was able to damage the boat and cause internal injuries to the crew. Having lost consciousness, submariners could not engage in the struggle for vitality.

During its short “career”, the submarine of the Navy of the KSA HL Hunley went to the bottom three times. In these incidents, 21 people died, including the chief designer. She managed to participate in only one real operation, during which she sent to the bottom a sufficiently large ship of the enemy, but she died and practically did not affect the course of the war. 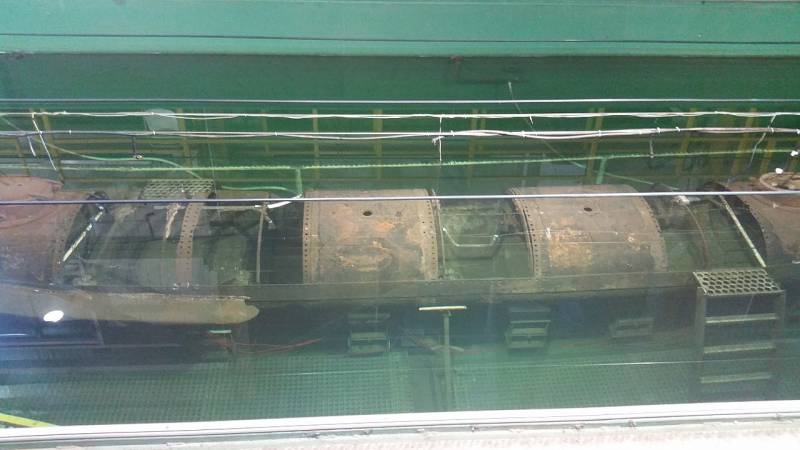 Submarine HL Hunley in a special pool. Wikimedia Commons Photos
From the point of view of design or combat use, the project of H.L. Hanley was clearly unsuccessful. To some extent, it can be justified by the lack of experience and the necessary components, the need to search for optimal solutions, etc.

However, the negative experience of the project has confirmed some things that now seem obvious. The Navy of the KSA learned that the construction and use of submarines is extremely difficult, responsible and dangerous. Any design flaw or crew error can lead to disruption of the operation and loss of life.