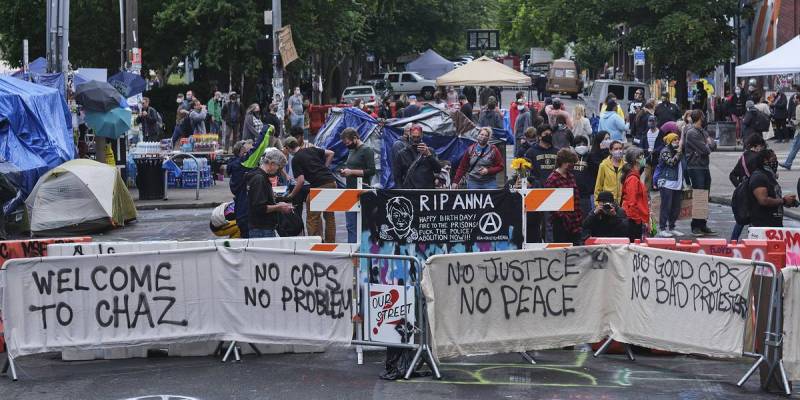 Anarchy is immortal. This becomes clear as soon as big shocks occur in the world. Nestor Makhno also said that it is possible to shoot all anarchists, but it is impossible to destroy anarchy. The ideology of the denial of power coming from above, and the struggle for the liberation of man from all forms of oppression will always find a response in hearts and minds.


The pandemic, quarantine, and especially their consequences with the Maidan “in an American way” raised such a foam that resuscitation of anarchism was almost inevitable. So far, not as a clear program of action, but ... The contrast between decisions and actions of authorities at various levels turned out to be too convincing in spring and early summer 2020.

And it is no longer surprising that it was at the lowest levels that things never differed with words, where people found real help and support. And the higher the power level, regardless of which country, the more mediocre and straightforward both decisions and concrete actions were. Let us leave China behind the brackets with its unique law-abidingness of the masses and so far the dubious results of the battle with COVID-19.

When the “white question” so sharply arose in the United States and in many countries of the old continent, it became clear that the ghost was wandering around Europe again. But not communism, but, most likely, anarchism. The image of anarchy and anarchists was successfully vulgarized by Soviet cinema, but this did not prevent the anarchy from being reborn over and over again as an ideology in demand. 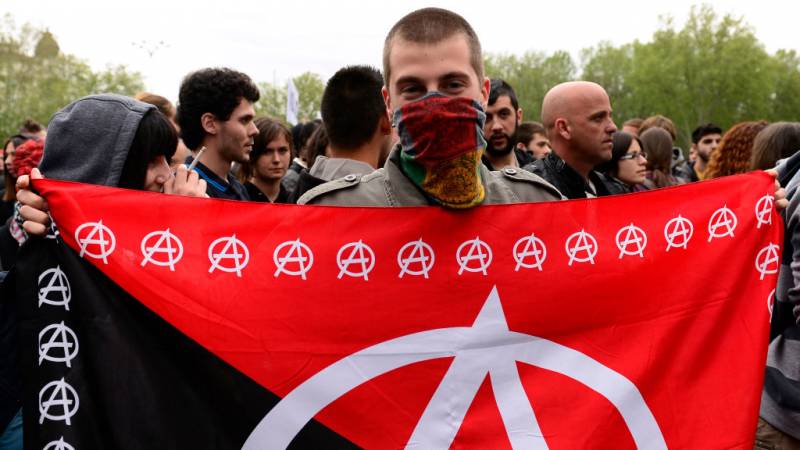 In Russia, anarchism always woke up locally, but around the world - regularly and very effectively. Although the "revivalists" just as regularly and aggressively replicated precisely their cinematic image. But Europe, by the way, using concrete examples in Spain of the 30s, nevertheless, managed to accumulate some practical experience for a different perception of anarchy.

And along with this, and to understand that even in the most simplified view, anarchism does not at all imply a complete denial of all power. It is primarily about the priority of lower-level authorities over higher authorities, to which only the most important functions are delegated, those that are not delegated to the top are simply impossible.

From the encyclopedic definition of the ideology of anarchism, which was based on the ideas of P. A. Kropotkin, it follows:

“Anarchism rejects only coercive law, not the law in general. Since the cultural environment is part of a person’s self-identification, and the law protects the cultural environment, people have the right to live under the rule of law if they want to. ”
Most crises of the beginning of the third millennium almost invariably led to a jump in the popularity of leftist ideas, primarily Marxist ones. However, the mass unrest that has swept both the old continent and its overseas branches today does not bear clear signs of a class struggle. And this despite the fact that the poor seem to be once again ready to confront the rich.

The current protests themselves, which are extremely massive, are not so much provoked by a pandemic and the direct consequences of global quarantine as they represent (after several weeks of “struggle”) a primitive release of steam. And in this situation, the demand for forgotten ideological models is always growing by leaps and bounds.

Little power does not happen much

It was no coincidence that many people were delighted with the unexpectedly high efficiency of “small power”, with which the whole world was able to visually become acquainted with the wave of self-isolation and salvation of destroyed social medicine. It is no longer a secret that COVID-19 was best handled in small countries, for example, in Iceland, Andorra, Liechtenstein and Luxembourg.

Against the backdrop of a real tragedy in northern Italy, they managed to avoid terrible losses in the tiny San Marino, which was almost at the epicenter of the coronavirus crisis. The negative exception in the form of the Principality of Monaco is primarily due to the fact that there was not, and still is not, any real opportunity to close the borders.

The reason for this, by the way. the suspicious loyalty of the principality’s authorities to gentlemen who regularly and publicly opposed the presence of a “rogue” in Monte Carlo.

Real successes and achievements in the fight against COVID-19 are no secret to anyone, and in addition, the enviable proximity to the people of hundreds and thousands of “helmsmen” in the field. “Helmsmen,” unknown to anyone in the big media. But they were armed with all the best that was and was in anarchism, and about which most Russians have no idea whatsoever.

However, with the foam after quarantine to the surface surfaced and all is not the best either. What is worth at least all these dances around the coffin of an inveterate felon with the setting fire to a couple dozen American states. Or mass buying up weapons in a quiet, loyal and turbid brainwashing California. But this is also a ghost of anarchism, brought to the absolute, when there is already nothing above an individual person. Not even families - individuals!

And this despite the fact that in the USA there are “more trunks than goals” for a long time, but this did not deprive every local sheriff of a full and unconditional credit of trust from the sponsored population. Now it seems that deprived. Well, with the trust in the police there, for many years things have been much worse than in Europe and even Russia.

The bewildered man in the street, who is not eager to go out with Molotov's cocktail, wants to catch on. For something. Faith helps not everyone. To recall Marx or Che Guevara is already old, not fashionable for a long time, and as they say, "it will not work." Under the leftist kookies, there was almost no more proletariat left who had nothing to lose but their chains.

Today, the public is simply frankly disappointed in all kinds of “liberty ideas,” which directly lead the “golden billion” to extinction. Well, those who are smarter do not hide their desire to learn or remember what the great anarchists once unsuccessfully tried to teach the world, starting with Bakunin and Kropotkin and ending with Commander Che. 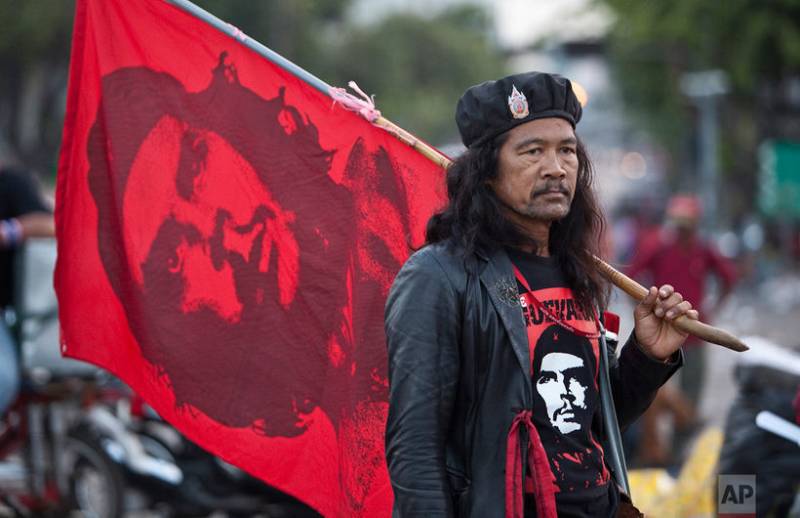 At the origins of anarchism

By the way, the latter generally rejected the ideas of anarchism, leaning more toward the victorious in Celestial Maoism, but in practice he realized the ideas of global anarchy right up to the notorious export of revolution. But many are now very attracted by the plain explanation of the foundations of anarchy, where, excuse me for repeating, the lower the level of power, the higher the level of its competence.

We repeat: practical anarchy is when only that which cannot be transferred there is transmitted upstairs. It is no coincidence that leaflets with a short course of the anarchist, and not the terrorist bombers, are more demanded than ever at current demonstrations and mass actions. Forced to repeat again, but in Russia the familiar image of the anarchist is still not forgotten. 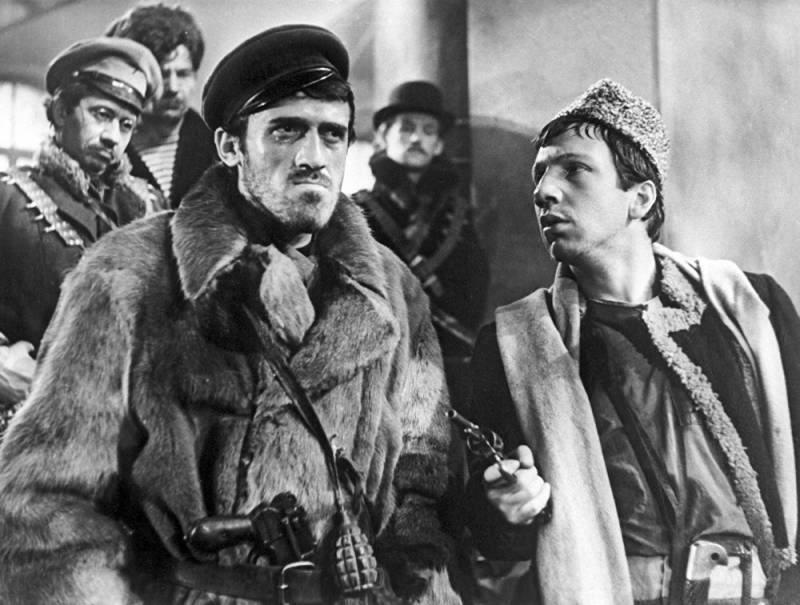 Anarchists. Frame from the movie "Emergency Order"
The image of the unbridled urban morphinist or the drunken sailor was either from the battleship, or from the low-speed barge, created by Soviet cinema and spread around the world. While campaigning for anarchy, or rather, for the priority of the lower powers, the real anarchists in terms of discipline and organization could give a hundred points ahead to any political rival.

Recall in conclusion two characteristic episodes. When in February 1921, Prince Kropotkin, the recognized leader of not only Russian but also world anarchism, died in Dmitrov, near Moscow, the Bolsheviks decided to make a broad gesture. They released from prison all the famous anarchists who were ready to carry the coffin with the body of Peter Alekseevich to Moscow itself. 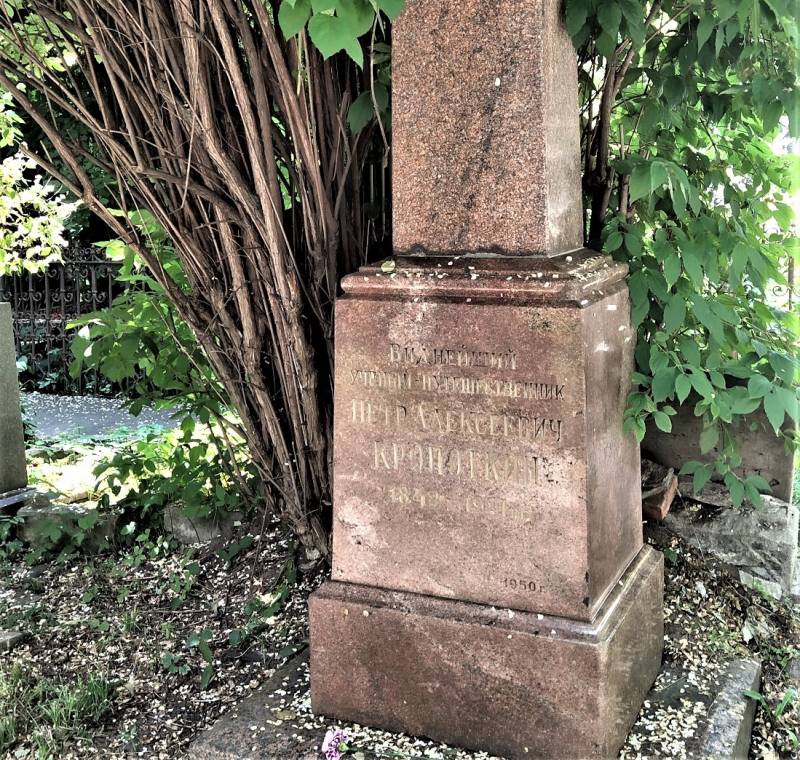 Grave of P. A. Kropotkin at the Novodevichy Cemetery
Kropotkin said goodbye for two days: hundreds of delegations arrived from Moscow factories, factories and institutions, thousands of ordinary people came. Anarchists, including prisoners, who, after the funeral at the Novodevichy cemetery, all in an organized manner returned to their cells, stood on the guard of honor near the tomb.

Another example is connected with the civil war in Spain, when the anarcho-syndicalists, who relied on the self-government of factories, factories and rural communities, turned out to be no less stubborn fighters for "Red Spain" than the communists. One of their legendary leaders, Buenaventura Durutti, was at the head of the three-thousandth “iron column”, which was distinguished by truly iron discipline, which almost recaptured Zaragoza from the Francoists.

Western historians call this native of Aragonese Leon, a Catalan metalworker, simply a bandit, but it was he, along with his comrades-in-arms, who heroically fought for Madrid. Durutti fell from the traitor's bullet in 1936, when it was still very far from the defeat of the republic.

By the way, a politician such as Vladimir Ulyanov-Lenin, who was prone to ruthless dictatorship, was no stranger to the best ideas of anarchism. The phrase attributed to him about the cook sounds in the work “Will the Bolsheviks Hold State Power” in a slightly different way:

"We know that any laborer and any cook are unable to immediately take control of the state."

The fact that Mayakovsky remade it into his famous one: “We will learn how to cook a state for each cook” is not as important as the fact that in a known form Lenin attributed the phrase to none other than Trotsky. The idea of ​​attracting the masses to the management system is important in itself. Starting, of course, from below, which, incidentally, was to be brought to life under the Soviet regime - the power of the Soviets.

But in fact, a good cook is, in fact, that same effective manager, probably better than those whom we in Russia have been intensively planting in management for many years. And the state, and all that is possible and impossible. It is difficult to judge how the best ideas of anarchism have worked in our days: propaganda clearly ignores this topic. But the fact that they are again in demand is a fact, it seems, is already indisputable.

Ctrl Enter
Noticed oshЫbku Highlight text and press. Ctrl + Enter
We are
Situational analysis of the death of the MH17 flight (Malaysian Boeing 777), made on the basis of engineering analysis from 15.08.2014Results of the week. “In our cooperative, the board is always agreed”
Military Reviewin Yandex News
Military Reviewin Google News
125 comments
Information
Dear reader, to leave comments on the publication, you must to register.