APU do not spare neither their own nor others 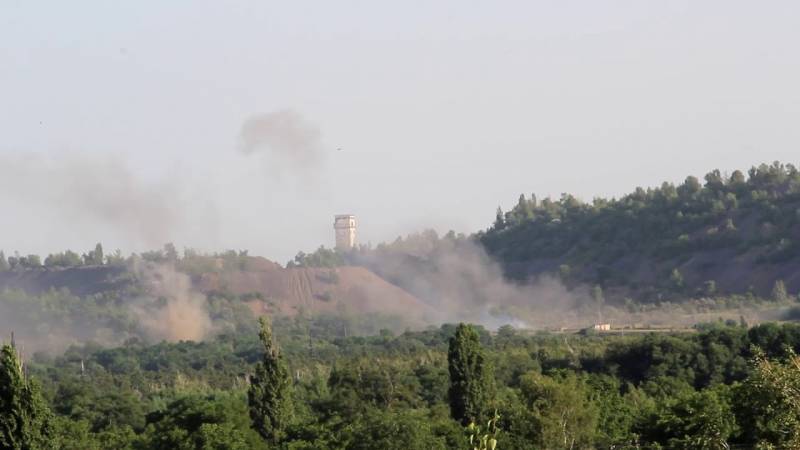 APU continue to shell Gorlovka from large calibers. On the night of Monday, July 6, hollowed all night. According to the calculations of the NM DPR, the enemy used artillery and mortars: 16 shells of 152 mm caliber, 33 of 122 mm caliber, 17 min of 120 mm caliber and 34 mines from 82-mm mortars. Fortunately, there were no casualties among the defenders of the Donbass and the civilian population, however, during the shelling, two sections of the Seversky Donets-Donbass canal were damaged, as a result of which several thousand residents of Gorlovka were temporarily left without water.

The canal infrastructure is one of the priority targets, and Ukrainian artillery not only regularly fires at the canal’s technical facilities, but also traditionally hunts repair crews that are involved in repairing the destroyed one. It is noteworthy that not only “separatists” drink water from the canal, but also residents of the part of the former Donetsk region occupied by Ukraine. The canal continues to Mariupol, so any downtime in its work is fraught with interruptions in water supply for both residents of the DPR and for those who, by misunderstanding, are still called Ukrainians.


On the brink of disaster

Ukrainian "heroes" with manic persistence hammer the channel "Seversky Donets - Donbass" for the seventh year. The damage to the facility has already led to serious problems with water supply: even in Slavyansk and its environs, where the canal begins, water is supplied on schedule, morning and evening, and regularly disappears for several days. The canal infrastructure, which already has 100% exhausted its operational resource, has been seriously damaged and there is nothing to repair it. Kiev does not allocate money for repairs. Individual sections need to be changed as a whole. The management of the channel in the uncontrolled territory estimated that 6,5 billion hryvnias (about 18 billion rubles) are needed for this.

A significant part of the Seversky Donets-Donbass canal lies on the territory of the DPR, often along the demarcation line, and is therefore subject to regular shelling. Repair work does not stop. Donetsk makes serious allocations for the restoration of water supply, but until the APU stops deliberately destroying infrastructure facilities, this process will be endless. At some point, the destruction of pumping and filtering stations can lead to the fact that the water simply stops flowing through the channel.

If this happens, most likely, Donetsk and a number of other settlements of the DPR will be forced to urgently organize additional water filtration measures, limit consumption to the maximum and use all alternative sources of water supply. It is likely that the DPR will be able to avoid a catastrophe - if only because there is a chance that part of the water will continue to flow through the channel by gravity, and there are still alternative sources. But in the millionth Mariupol, which is completely dependent on the "Seversky Donets - Donbass", a real humanitarian catastrophe may well take place. Especially if the misfortune happens in the summer.

It is not entirely clear whether Kiev is so indifferent to these problems, or Ukraine is simply no longer able to control its units on the demarcation line. The Armed Forces of Ukraine demonstrate complete disregard for all residents of Donbass, regardless of whose territory they are in (by the way, similar problems exist in the LPR), successively disrupting the ceasefire and violating the agreements.

It is noteworthy that all international humanitarian and public organizations fully aware of the problem are limited to useless statements - instead of applying sanctions against Kiev. Actually, it has long become clear that no one is going to pull Ukraine, especially since the center is far from always able to control what is happening on the front line. It remains only to wait. What? Large-scale drought, pestilence, and smooth water? And then - a water truce? Or wait for the coercion of Ukraine to peace? Most likely, we will see a drought and a humanitarian catastrophe much earlier.

Ctrl Enter
Noticed oshЫbku Highlight text and press. Ctrl + Enter
We are
Armed Forces of Ukraine are ready for a new round of aggression: night self-shelling near Mariupol and new counter-battery radars from the USASituational analysis of the death of the MH17 flight (Malaysian Boeing 777), made on the basis of engineering analysis from 15.08.2014
Military Reviewin Yandex News
Military Reviewin Google News
23 comments
Information
Dear reader, to leave comments on the publication, you must sign in.