How the Russian army, led by Rumyantsev, crushed the Turks at the Battle of Larg 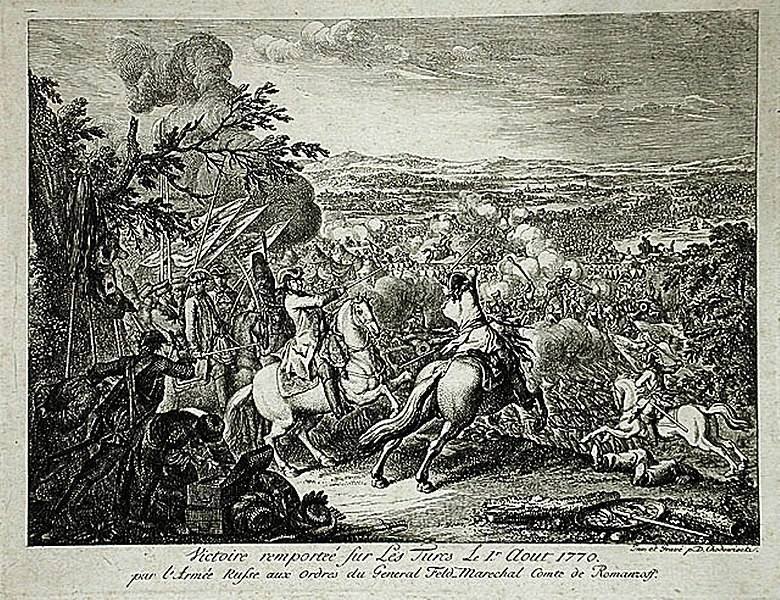 Rumyantsev in the battle with the Turks

250 years ago, on July 7 (18), 1770, a battle took place on the Larga River between the Russian army of General Rumyantsev and the Ottoman troops of the Crimean Khan Kaplan-Girey. Despite the numerical superiority, the Turks and Crimean Tatars were defeated and fled.

The situation before the battle

In the spring of 1770, the Turkish army, with the support of the Crimean cavalry, went on the offensive. The small corps of General Repnin, located in Moldova, which suffered serious losses from the plague epidemic, could not resist the enemy and retreated. Russian troops retreated under the pressure of superior enemy forces and secured their positions at the Ryaba Grave. Enemy cavalry blocked Repnin's detachment.

To help the advanced corps came out with the 1st Army Rumyantsev. On June 17, 1770, Russian troops defeated the large Tatar-Turkish army at the Ryaboy Graves ("The defeat of the Turkish-Tatar army at the Ryaba Grave") The enemy fled. However, soon the troops of the Crimean Khan were strengthened by the Turkish corps. Turks and Tatars took a position near the Larga River, the left tributary of the Prut. The number of the Ottoman army reached 80 thousand people (65 thousand cavalry and 15 thousand infantry) with 33 guns. The Ottoman command chose a convenient position. Turkish troops were stationed across the Larga River, on a high plateau. From the north (front), the Turks were covered by the impenetrable ford river Larga, from the west - the rivers Balash and Prut, from the south and southeast - the river Babikul. There were no serious natural obstacles from the northeast and east, and this was the most vulnerable spot of the Turkish camp.

The Turks strengthened their position with four retransachements (a fortification in the form of a shaft with a moat in front). The most dangerous direction was reinforced by a strong horseshoe-shaped retranschement so that the enemy could not get around the position on the right. All field fortifications were occupied by Turkish infantry. The cavalry were located behind the right flank.

After the battle at the Ryaboy Grave, Russian troops rested for two days. June 19, 1770 the army again went forward. July 4, Rumyantsev’s troops were located at the heights of the river. Largs. The Repnin division was located on the left flank, the Baur division was on the right, behind them were the main forces. The Russian army numbered about 38 thousand people with 115 guns. Tatar cavalry tried to attack the Russian camp, but was repelled with the help of light cavalry with field guns.

Rumyantsev needed to defeat the troops of Kaplan-Girey before joining him with 150 thousand army of the great vizier. On July 5, a military council was held. The decision was unanimous - to attack, despite his superiority in strength and strong position. The Russian commander-in-chief decided to launch a defensive attack from the front and deliver the main blow to the weakest right wing of the enemy. From the northern direction, the division of Lieutenant General Plemyannikov was advancing (6 thousand soldiers with 25 guns). Plemyannikov’s division was to divert the attention of the enemy, and then, during the attack of the main forces, deliver an auxiliary strike.

The right wing of the enemy army was hit by the vanguard of Quartermaster Baur (about 4 thousand soldiers with 14 guns) and the division of Lieutenant General Repnin (11 thousand people with 30 guns). Behind them were the main forces under the leadership of Rumyantsev himself - about 19 thousand people (11 thousand infantry and 8 thousand cavalry). To hide their plans, the Russians lined up 8 km from the enemy camp. The infantry was built in several squares with 2-4 thousand soldiers each. The cavalry was located between the square, also covered the flanks and rear. Artillery was attached to the divisions, part was in reserve. As a result, Rumyantsev skillfully chose the enemy’s weak spot and secretly concentrated his main forces there. At the same time, the enemy was distracted from the front. 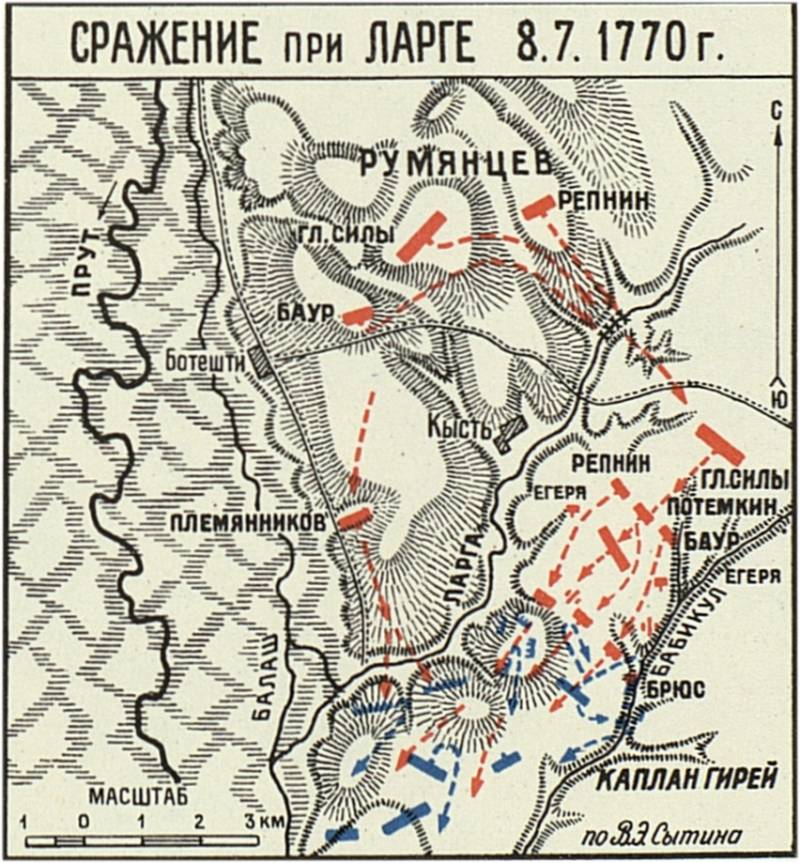 The battle of Larg. Source: L. G. Beskrovny. Atlas of maps and diagrams on the Russian military stories

On July 5, Turks and Tatars led by Abdy Pasha launched a strong attack on Russian positions. At first they piled on Repnin’s division, then on Baur. The attack was repelled. Having received reinforcements from the camp, the Ottomans again attacked the Russian right flank. The situation was dangerous. The Turks squeezed our advanced light forces. It was corrected with a counterattack by the detachment of Major General Weisman. He received additional rangers from the main forces, two battalions of rangers, and, with the support of the cavalry, delivered a strong blow to the enemy. Also, Russian artillery caused great damage to the enemy. The Ottomans retreated.

In order to mislead the enemy, the Russian troops observed a disguise. Tents were left in the camp. With the onset of darkness, when the troops began the maneuver, bonfires were left in the camp. On the night of July 7, the main forces of the Russian army crossed the Larga river according to previously induced crossings. Russian troops went to the enemy camp. Ahead rangers in a dense chain went huntsmen. In the first line were the square of Repnin, Potemkin and Baura. In the second line of power Rumyantsev, in the third - cavalry. Light cavalry was located behind the left flank. Artillery (7 batteries) moved between the square in the first line.

By 4 o’clock in the morning, Russian troops, having knocked down the enemy’s advanced posts, reached the right flank of the Turkish position and, with the support of artillery fire, launched an attack. Baur’s troops captured the first trench, then, receiving reinforcements, and the second. Repnin's soldiers attacked the third trench. The enemy offensive from the right flank was unexpected for the Ottomans. They began to hastily transfer troops and artillery from the front to the attacked area. It was used by Russian troops from the front. Plemyannikov’s division broke into the enemy camp from the north. The Tatar cavalry tried to counterattack along the Babikul River to bypass the left flank of the Russian army and go to the rear. However, this attack was not successful. Russian cavalry, artillery and ranger battalions with strong fire stopped the enemy. Crimean cavalry was upset and fled.

In order to strengthen the blow, Rumyantsev threw second-line troops into the battle. Parts were advanced due to the flanks of the first line. The front of the attack was expanded, the blow was strengthened. By noon, four enemy fortifications were captured. Turks and Tatars, unable to withstand a well-organized attack, were demoralized and fled from the camp. The Russian cavalry was too heavy and could not catch up with the enemy and complete the rout. The enemy threw all the artillery (33 guns), banners and convoy. The Ottoman army lost over 1 thousand people killed and 2 thousand prisoners. The losses of the Russian army were insignificant - 90 people were killed and wounded.

In this battle, Rumyantsev used new tactics. The army advanced with several marching columns, which became parts of the future battle formation. This facilitated the combat deployment of troops. The troops marched without slingshots, which they had previously defended from enemy cavalry. The bayonet was recognized as the main defense of the soldier. The army was divided into divisional and regimental squares (previously the troops were lined up in one large square), which made it possible to advance and maneuver forces. The success of the Russian army was facilitated by the use of the loose ranks of rangers in front of the main forces. Artillery under the command of General Melissino was actively used. Among the distinguished commanders, Potemkin, Gudovich, Kutuzov, Mikhelson, Ferzen, Lassi and others became famous later.

Ctrl Enter
Noticed oshЫbku Highlight text and press. Ctrl + Enter
We are
The defeat of the Turkish-Tatar army at the Ryaba GravesBrilliant victories of the Russian army under the leadership of P. A. Rumyantsev over the Turkish-Tatar troops: the battles at Ryaba Mohyla and Larga
16 comments
Information
Dear reader, to leave comments on the publication, you must to register.