How the Khmer Rouge defeated the Vietnamese: the forgotten war of 1978 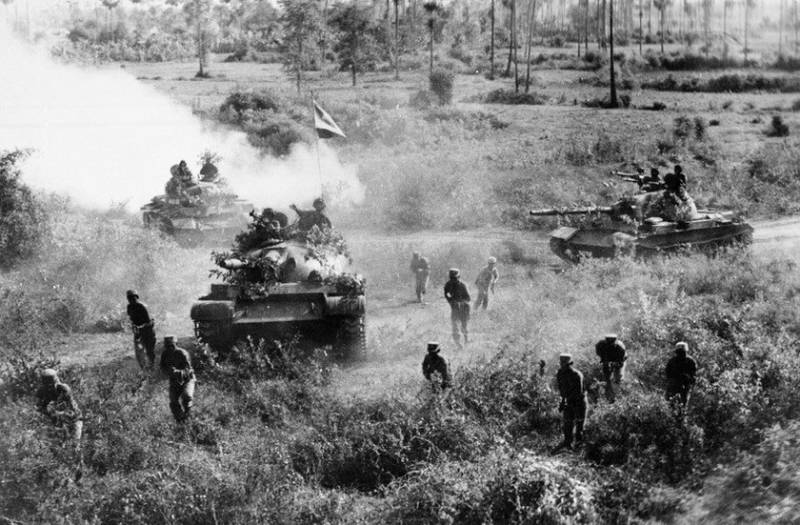 It is difficult to find photographs of precisely this short and unsuccessful war of 1978 for Vietnam. And in general, in the black and white mess of the photo archive of the Indo-Chinese wars, it is difficult to make out who is who. This Vietnamese photo shows how the forgotten battles of early 1978 could begin.

В stories a number of wars there are white spots, forgotten events and whole battles that seriously hinder the understanding of the course of the whole war. Sometimes a whole chain of events is replaced by a simple propaganda myth.

A few years ago, I explored the war in Cambodia that was of great interest to me, about which we had little knowledge in essence. I do not need to talk about Oleg Samorodny and his book, since he mainly retold stories from the corridors of embassies (interesting and informative in their own way), and he had an indirect relation to purely military events. Having studied the history of the war in Cambodia, I became preoccupied with the sources. I needed a source that would cover the war day after day. But, since it was impossible to get to the Vietnamese military archives, and the Khmer Rouge military archive was either destroyed or disappeared somewhere (according to some reports, it was taken to Hanoi after the capture of Phnom Penh in early 1979), it was necessary to find some third-party source . And he was found: the Singapore newspaper The Straits Times, whose full-text archive was posted on the website of the Singapore National Library. I rummaged through it with a search, read all the messages that mentioned khmer rouge (their usual name at that time), and wrote down everything at least somehow informative. Journalists usually received information from a newspaper office in Bangkok, which, in turn, was supplied with information by Thai intelligence. She was very interested in everything that was happening in Kampuchea, since Thailand was the first country where the battered Cambodians were beaten in the next round of armed showdown. Due to the difficulties of working with agents, Thai intelligence pushed for radio interception.

Radio interception - Thai intelligence - The Straits Times newspaper. This is how information from the battlefield and from parts of the fighting parties got to the pages of the newspaper. Not everything was accurate and complete, but each message was supplied with an exact release date for the newspaper. This allowed me to compile a chronological table of events, and the geographical points mentioned in the messages allowed me to arrange events on a map. From the pieces of information, a rather interesting picture of the history of the Cambodian war was formed, in which forgotten battles were discovered that were not mentioned by any other source. These are battles that took place from September 1977 to June 1978, that is, the entire dry season of 1977/78, when they usually fight in Cambodia.

These events are forgotten because of their, so to speak, indecentness. Glorified in battle and defeating the Americans, the Vietnamese army suffered a complete defeat and retreated. She was beaten, and by whom? The Khmer Rouge, which only 5-6 years before, the Vietnamese themselves picked up in the jungle, armed, taught to fight! That is, it was a great shame. It’s hard for us to imagine, well, for example, as if the DPR army had defeated the Russian army — that’s a disgrace of about this scale. It is clear that Vietnam was not at all eager to talk about it. I am also sure that the entire propaganda campaign against Pol Pot, which painted him in the blackest colors and began at the end of 1978, appeared to justify the invasion of Kampuchea and to hide the shame of the previous defeat.

This story was described in more detail in my book Radio Interception War. The history of the communist war in Cambodia. "

Unclear background of the conflict

How the long communist war began between Kampuchea and Vietnam (this was a unique case when the Communists fought on both sides, at least initially, until the Khmer Rouge renounced communism in 1981), is still not clear. Countries were of the same ideology, allies, comrades in arms etc. Vietnam was pro-Soviet, Kampuchea - pro-Chinese, but objective reasons for the battle were not visible.

I will not delve into this issue, especially since it requires additional searches; I can only say that, in my opinion, the Vietnamese and Kampuchean communists were pitted by anti-communist rebels. They were decent. For example, in southern Vietnam in 1978, Fam Nam Ha detachments operated, and then the former Commodore of South Vietnamese fleet Hoang Koh Min created an entire army of the National United Liberation Front of Vietnam. In May-June 1977, there were strange skirmishes on the border in the Ha Tien area with troops coming from Kampuchea, about which Singaporean journalists directly wrote that they were "Cambodian or Vietnamese rebels." In September 1977, the fighting west of Ha Thien acquired a large scale, with about 5 Vietnamese soldiers, artillery and aviation. At the same time, in September 1977, Khiu Samphan congratulated the Vietnamese comrades on Independence Day.

I think that the Kampuchean anti-communists acted like mummers of the Khmer Rouge, and they managed to mislead both sides by planting hostility that soon turned into a large-scale war. At the end of December 1977, a major battle involving artillery and aviation broke out in the Svayyeng province of Kampuchea; the Vietnamese lost about 2 thousand people, but began to develop an offensive inland Kampuchea in the province of Takeo. Apparently, this was the first battle between the Vietnamese and Kampuchean troops.

Perhaps the background was still not very clear, as the newspaper reported on December 7, 1977 that Pol Pot and Chinese Deputy Prime Minister Chen Yu Wei for some reason traveled to the Cambodian-Vietnamese border and examined some points there. Reliable facts are clearly not enough for us to understand the background of the Vietnam-Kampuche conflict.

Soon, six Vietnamese divisions crossed the border and captured all of eastern Kampuchea to the Mekong. On January 3, 1978, Phnom Penh radio reported that the front was about 100 km from the city, and the capital could be captured within 48 hours. Relations between Kampuchea and Vietnam were severed, the Vietnamese embassy was expelled.

The Vietnamese attacked with two wedges, in the north along highway number 7, first to the northwest with a turn to the south; and in the south, along Highway 2 almost exactly north, through Takeo to Phnom Penh. That is, ticks. The Khmer Rouge kept a large enclave in the province of Svayrieng, in a ledge deep into Vietnamese territory, along Highway 1. In principle, the situation did not look particularly difficult for the Vietnamese. They captured the ferry across the Mekong to Neak Luong, from where Phnom Penh was within easy reach.

According to estimates by U.S. intelligence in the newspaper, there were about 60 thousand Vietnamese people with tanksand Khmer Rouge - 20-25 thousand people. Any military analyst could, taking all circumstances into account, bet that the Vietnamese would soon be entering Phnom Penh. And I’d be mistaken. On January 6, 1978, the Khmer Rouge launched a powerful counterattack and on January 8 actually defeated the Vietnamese. Radio Phnom Penh reported Vietnamese losses of 29 thousand people killed and wounded, about 100 tanks were destroyed. 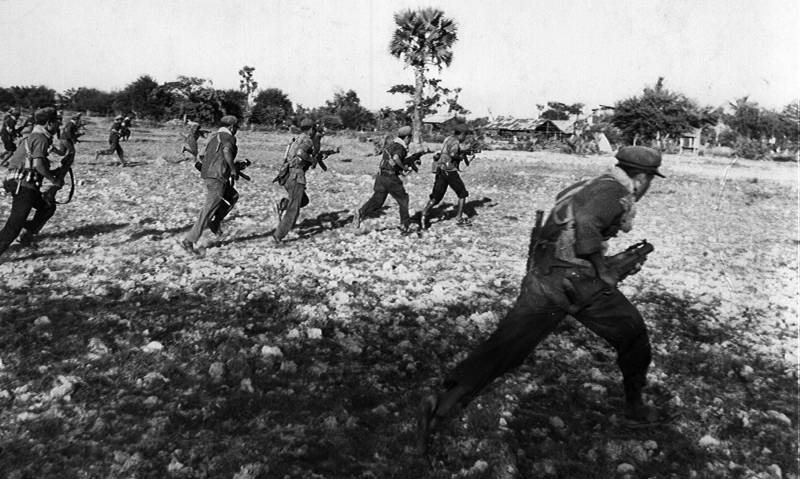 Khmer Rouge attack. But this is precisely the photo of 1975, and three years later they were better armed, had equipment and artillery
Most of them, 63 cars, were burned by the Khmer Rouge in battles on Highway 7. For several days there were conflicting reports about who won, but on January 13, 1978, the Deputy Foreign Minister of DRV, Wo Dong Zang, offered Kampuchea peace talks to end the “fratricidal” war. " So it became clear that the Khmer Rouge actually kicked the ass of the Red Vietnamese.

Later, American intelligence also reported that the Vietnamese retreated and now occupy a strip of about 20 km inland Kampuchea from the border. The Khmer Rouge on January 9, 1978 launched an offensive in Vietnam, captured the provinces of Kien Zang, An Zang, Long An and January 19 attacked the city of Ha Tien - the seaport. The Vietnamese lost the main rice-producing province in South Vietnam - An Zang, despite the fact that the situation in the south of the country was close to starvation. Kampuchea also got it; the Vietnamese damaged the Phnom Penh-Kampongsaom railway to the port, where Chinese weapons and ammunition went. 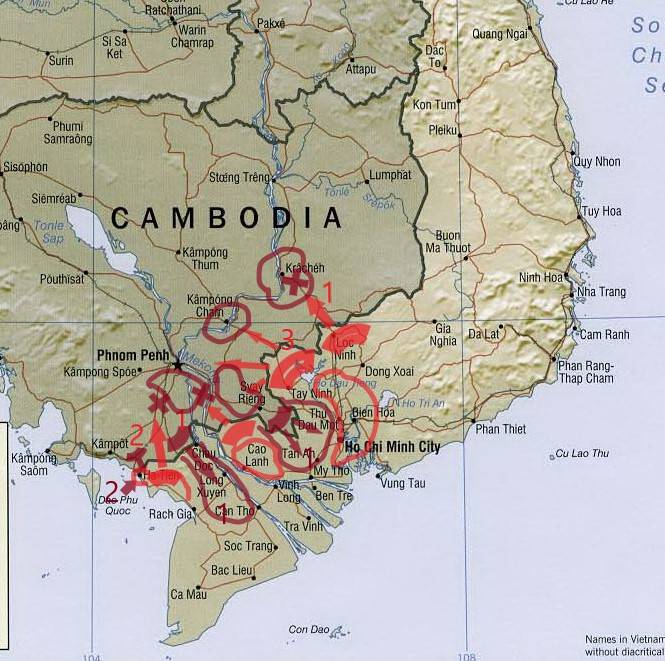 For some time, both sides did not launch large-scale attacks, but exchanged sensitive blows. In February 1978, a large group of Vietnamese, with the support of 30 tanks, helicopters and aircraft, tried to advance on Phnom Penh along the Bassak River, from the south. The offensive was repelled, and the Vietnamese group retreated.

The Khmers in the province of An Zang very successfully repelled the Vietnamese attacks, but they already had the strength to attack and capture the city of Ha Thien, despite the fact that the city center was only 2,5 km away. Khmer Rouge tried to solve the case by landing. Around March 10–13, 1978, a Khmer Rouge battalion landed west of Ha Thien and attempted to advance. The attempt failed.

Meanwhile, the Vietnamese gathered for a large-scale offensive a group of about 200 thousand people. But the Cambodians were lucky. On March 16, 1978, in the province of Kampongtyam, Colonel Nguyen Binh Tinh, an officer in the headquarters of the 5th Vietnamese division, was captured. He spoke of plans for an upcoming offensive in the provinces of Svriyeng, Preyweng and Kompongtam, east and northeast of Phnom Penh, in April 1978.

The officer told the truth, and on April 13, 1978, the Vietnamese went on the offensive, which ended in the loss of 8-10 thousand people for them, burned tanks, a plane shot down and the offer of a ceasefire in early June 1978. The battles went on for a month and a half, but almost nothing significant was reported about these battles in the newspaper. 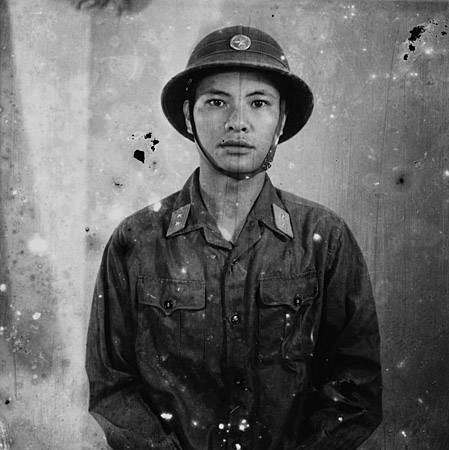 An unknown Vietnamese officer (most likely a lieutenant) in S-21 Tuol Sleng Prison in Phnom Penh; apparently captured by this unsuccessful war for the Vietnamese
After this setback, Vietnam began to prepare for a more serious attempt to invade Kampuchea, which was associated with a propaganda campaign against Pol Pot, the organization of an anti-Polpot uprising in the eastern zone of Kampuchea (the Vietnamese managed to persuade the entire leadership of the Eastern zone and large rebel groups were formed there) and creating powerful aviation superiority. This attempt was successful and culminated in the capture of Phnom Penh on January 7, 1979. Although this success was a prologue to pulling into a long, bloody and almost inconclusive war with partisans in western Kampuchea, along the border with Thailand.

The reason for the defeat of the Vietnamese in 1978 was, of course, in the Vietnamese themselves, who made serious mistakes. Firstly, the underestimation of the enemy, although shortly before that the Khmer Rouge had switched to a divisional structure, received new weapons from China and were trained by Chinese instructors. Secondly, the plan to take Phnom Penh to the ticks with tank attacks along the roads was not bad only at first glance. In fact, the Vietnamese forces inevitably extended into a long column, extremely vulnerable to flanking attacks; since along the roads there was a terrain impenetrable for equipment, the movement of tanks and vehicles was possible only along the highway. This mistake was made in Kampuchea more than once before the Vietnamese. Thirdly, the shown carelessness. The Khmer Rouge, initially showing very little resistance, allowed the Vietnamese to drive deeper, stretch themselves into the convoy, and then they defeated and destroyed them with flank attacks from both sides.

This all had a shocking effect on the Vietnamese and led to the fact that the Vietnamese leadership was ready to grapple with Paul Then seriously, after having slandered him. This forgotten war, unsuccessful for the Vietnamese, changed a lot in the further course of the communist war in Indochina.