Camouflage Gilly Costume: From Hunting to War and Back 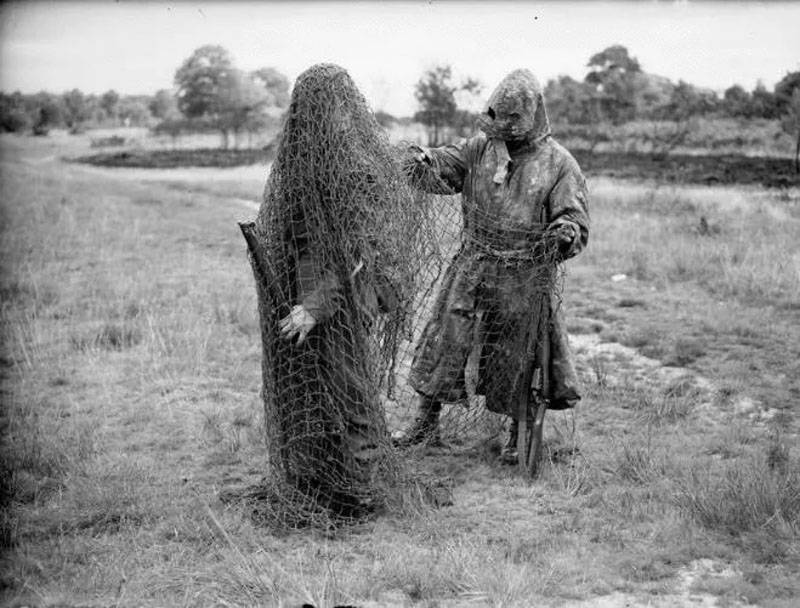 The stereotypical image of a sniper, secretly approaching the firing position and waiting for hours for his goal, is inconceivable without a “gilly” camouflage suit. This item of equipment is of great interest from different points of view - from stories origin and development to the specific application.

Many attributes of peaceful life were created for the army and only then went beyond its borders. The Gilly costume is an exception. It is believed that the first gillie suit was created in Scotland at the end of the XIX century. and intended to help hunters.

According to the traditions of that time, hunters were accompanied by huntsman assistants who were supposed to track the game, drive it, etc. These assistants were called "gilly"; such a nickname hinted at "Gile du" - forest spirits from Scottish folklore, dressed in leaves and moss. For a long time, gill huntsmen began to produce various camouflage tools that allowed them to work quietly on the ground. 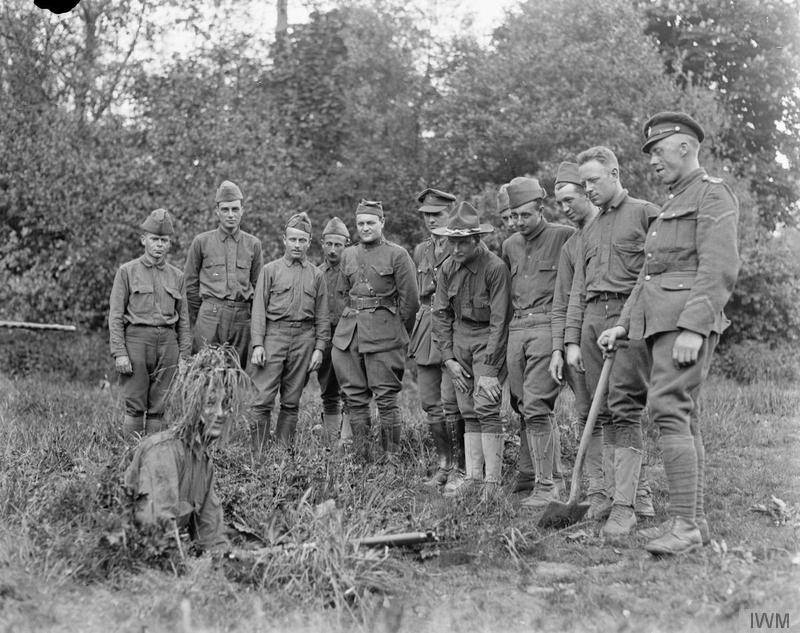 American soldiers on the fronts of World War I, 1918. In the foreground is a sniper in a gilly cape. Photo Imperial War Museum / iwm.co.uk
Over time, by the end of the XNUMXth century, certain camouflage means were transformed into full-fledged costumes. Usually long cloaks or cloaks of burlap with hoods were used, unevenly cut along the edges and / or with hemmed flaps. Also, the basis for the costume could be a grid on which pieces of fabric, bunches of grass or threads, etc. were fixed.

In general, it was then that the main features of the gilly suite were formed, which have not undergone changes to this day. The costume should hide the hunter's figure as much as possible, blur its silhouette and merge with the surrounding area.

From the hunt for war

In January 1900, specially for participation in the Second Boer War, the Lovat Scouts Regiment was formed, staffed mainly by Yeomen and hunters from Highland. This was the first unit of the sharpshooter snipers in the British Army. 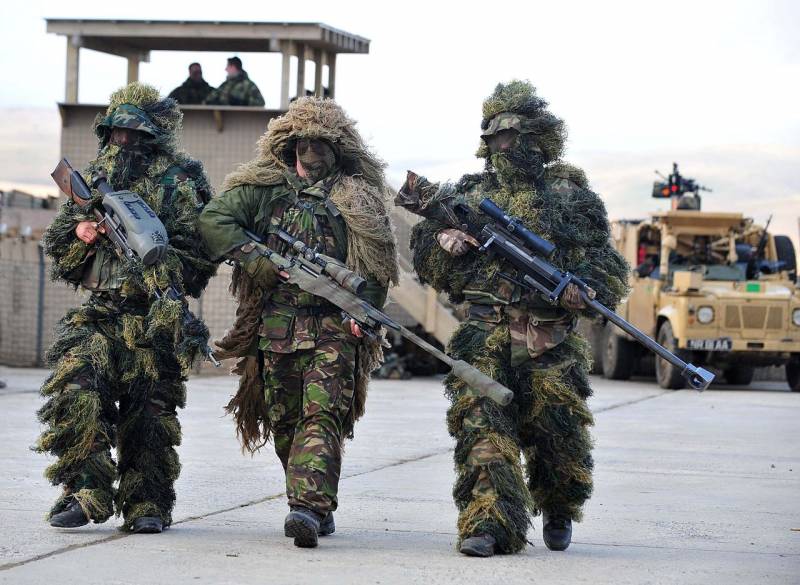 UK and France snipers at the 2012 Boars Head exercises. Fighters use different types of disguises. UK Defense Photo
The soldiers of the regiment were good shooters, and also had extensive experience in ambush hunting - all this could be useful at the front. In addition, they took with them to the war some elements of civilian hunting equipment, including camouflage suits. Thus, the Lovat Scouts became the first well-known army unit to use the gilly in a real conflict.

Although the conditions of South Africa differed significantly from the landscapes of Scotland, camouflage suits were useful to fighters. After minor alterations to local conditions, the gillies could again effectively hide the arrow and merge with the terrain. According to the results of the battles, the Lovata Scouts received the highest marks - and camouflage suits played a significant role in this.

During the First World War, the British army began to create its own school of sniping, which, among other things, provided for the creation and modernization of camouflage means. Scout suits were improved and actively used in all formations. Factory production was established, but often snipers had to make costumes on their own - as well as modify them for a specific area. 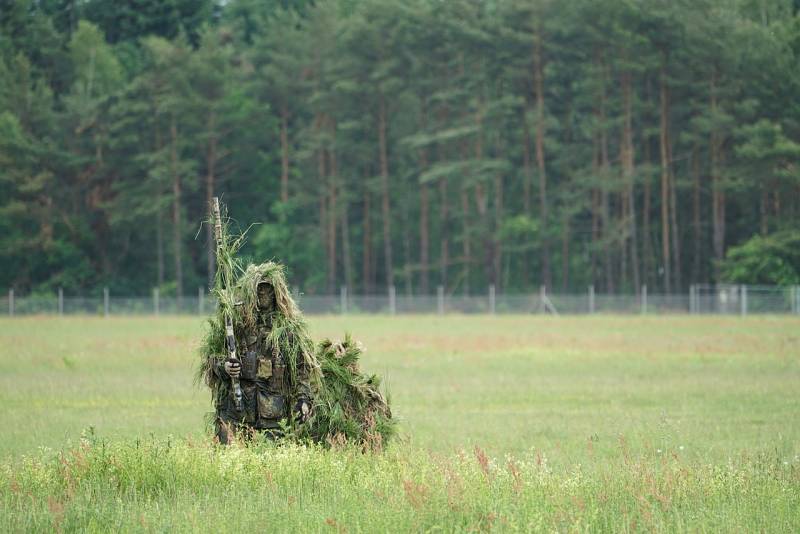 KSK special forces sniper pair, Germany. Wikimedia Commons Photos
The British experience did not go unnoticed. Snipers of other countries began to make their own options for gilly, first at a makeshift level, and then with the help of sewing organizations. Quickly enough, everyone realized that a sniper in a camouflage suit in a competently prepared position was practically invisible - and at the same time capable of inflicting the most serious damage on the enemy.

The experience of the First World War was actively used in the interwar period and in the next global conflict. Snipers of all countries received or made independently various types of gillies. So, Britain and the Commonwealth countries continued to use sophisticated multi-element capes or cloaks with hanging rags. Red Army snipers received camouflage uniforms - monotonous or camouflage capes and jackets, which were independently supplemented by leaves, bunches of grass, etc.

After the end of World War II, sniper work retained its high value, and special equipment remained in service. Camouflage suits continued to evolve - primarily through the use of new materials and configurations. Sacking, canvas and cotton gave way to other fabrics. Dense textiles were replaced with fine mesh. Strips of woven material gave way to imitation grass. 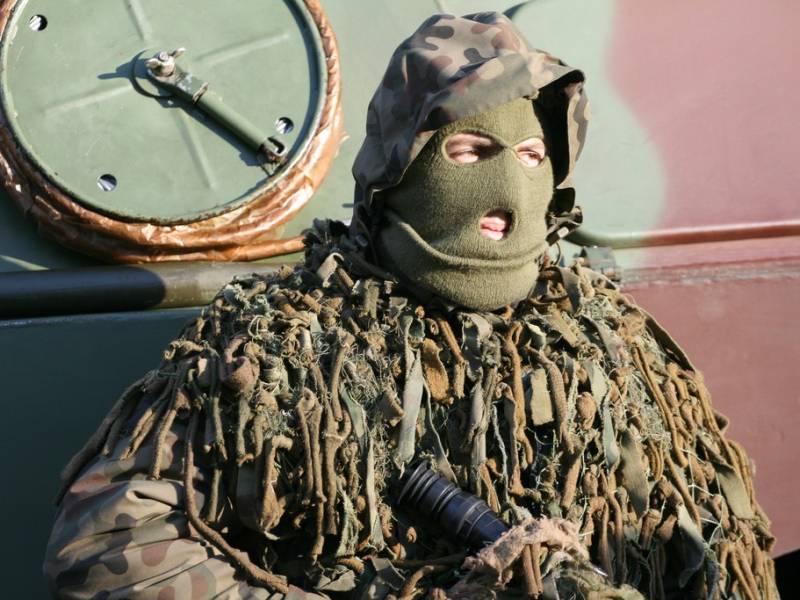 Polish sniper. Wikimedia Commons Photos
Also developed new color schemes for camouflage, adapted to the conditions of various potential theaters of war. Unlike standard army camouflage, sniper equipment should more accurately match the terrain - both the success of the work and the survival of the shooter depend on it.

The emergence of new surveillance tools suitable for use in the dark, presented new requirements for gilly. Materials and / or impregnations for the fabric were required that did not stand out against the background of the terrain even with minimal lighting. Also, there was a problem of thermal insulation so that the sniper did not “glow” due to the generated heat.

Old Gilly costumes were afraid of fire. Numerous flaps and fluffy elements of burlap, dry grass, etc. easily caught fire and threatened the shooter's life. By the end of XX century. both fire-resistant materials and special impregnations appeared. Modern gillies of this kind do not ignite and do not support combustion. 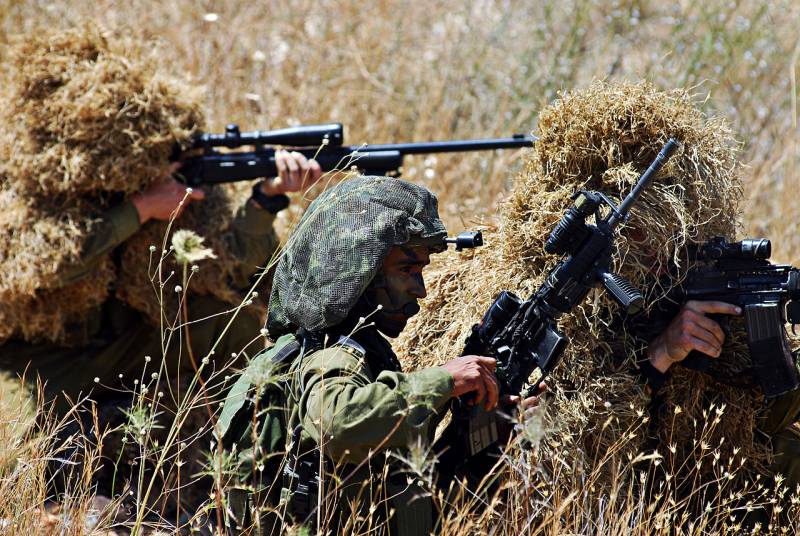 Israeli arrows. You can clearly see how their camouflage is adapted to the terrain. Photo AOI
Gilly "classic" look with time appeared in our country. For their characteristic appearance, they were nicknamed "Hobbies" and "Kikimors." The authors of these nicknames did not know Scottish folklore, but built associations in the same way as hunters of the late XIX century.

In battle, in hunting and in sports

Currently, camouflage suits of a characteristic look continue to be widely used in various fields. Gilly still remain an attribute of the Scottish rangers and retain their place in the armies and power structures of all developed and developing countries. The costumes are well established and are unlikely to be abandoned in the foreseeable future.

The use of gilly in the armies has become a real advertisement. Thanks to army snipers, such equipment was of interest to a wide range of hunters in different countries. As a result, quite a long time ago the gilly suite ceased to be an exclusively Scottish hunting tool.

Numerous movie militants about snipers and other cool guys from special forces contributed to the popularity of gilly outside the armies. In this case, it turned out to be useful not so much a masking action as an unusual spectacular appearance, which differs sharply from standard army uniforms. 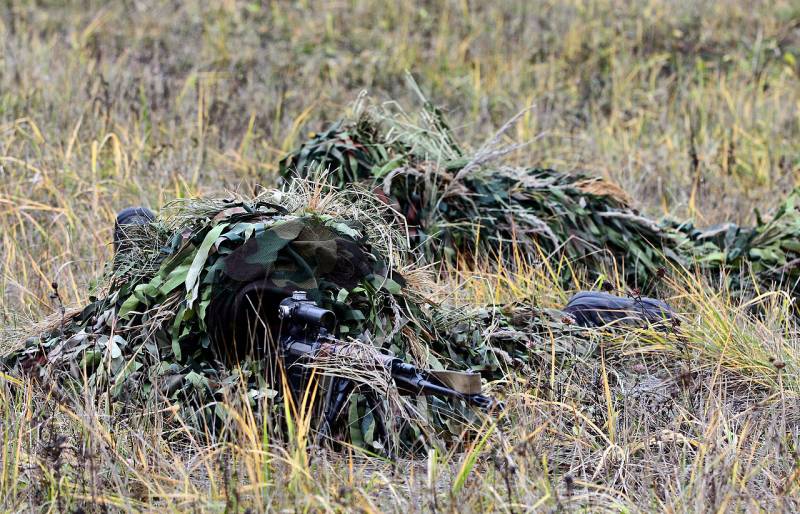 Russian snipers from the 4th Guards tank Kantemirovskaya VV division, 2012. Photo by Vitalykuzmin.net
The emergence and development of military sports games led to additional demand for army equipment in general and for camouflage suits in particular. So, there are snipers in airsoft and hardball. They also have to disguise themselves, at least for entourage or to imitate fighters of specific units.

The first camouflage costumes, which are the ancestors of modern "gilly-suites" and "goblin", appeared at the end of the XIX century. and intended only for peaceful purposes. In the future, such costumes fell into the army - and do not leave it for more than a century, but at the same time they are spreading in other close areas.

Over the past century, a characteristic furry costume has become widespread and actively developed. Apparently, in the foreseeable future he will retain his place and will not go anywhere. This means that the enemy and game will still have to be careful, because any pile of foliage, grass or moss may turn out to be a sniper ready to fire.

Ctrl Enter
Noticed a mistake Highlight text and press. Ctrl + Enter
We are
Sniper craft basicsAn-12 in Afghanistan
14 comments
Information
Dear reader, to leave comments on the publication, you must to register.