Ukraine has become a threat to LDNR and Russia 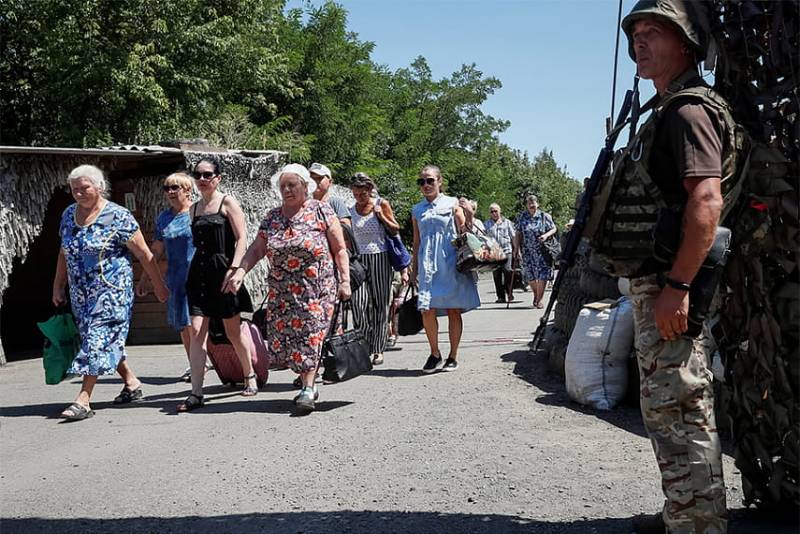 In Ukraine, they recognize: half a step remains before the full return of all recently lifted quarantine restrictions. The number of patients with coronavirus almost doubled. Now we are talking about record numbers: from 600 to 1000 cases per day. On Wednesday, July 1, the number of detected cases in the Lviv region reached 153 people (this is reported by the Ukrainian press). In total, on July 1, the number of cases amounted to 855 people, and the total number of patients with coronavirus, according to the Ukrainian Ministry of Health, is 24,3 thousand against 13,6 thousand cases in early June. Ukraine is now in the “red zone” in incidence: the number of patients is about 58 people. per 100 thousand people. These indicators can be underestimated. So, the chief sanitary doctor Viktor Lyashko claims that health care can not even figure out the exact number of deaths from a coronavirus: the Ministry of Statistics, which submits reports only once a month, counts.

Moreover, over the entire period of the spread of the disease in the DPR, 1166 cases were recorded; 716 people are currently under treatment. In the LPR, 504 cases of infection were recorded. Republican doctors report that at the moment the situation is completely under control, however, if communication with Ukraine remains open, the situation may change dramatically.

On July 1, LDNR opened borders with Russia. At the same time, residents of Donbass entering the territory of the Russian Federation must undergo a mandatory 14-day isolation, but there are no guarantees that the authorities will be able to keep track of the movements of visitors. At the same time, there is a checkpoint in the LPR near the village of Luganskaya on the demarcation line, and in the DPR, under pressure from the sudden problem of the public, there is a full discussion of alternative ways to open CPVV in Yelenovka. What exactly is being discussed is not yet clear. Most likely, the authorities can simply bend under the pressure of citizens striving for Ukraine and do not give a damn about their own decisions, as well as about the safety of the population. Moreover, today in the DPR there are problems with places for observing people entering from Ukraine, and if their number grows, there will simply be nowhere to place them. We will have to dissolve people in their houses in the hope that they will adhere to a regime of self-isolation.

If the circulation of people between LDNR and Ukraine continues, it is logical to assume that this will negatively affect the epidemiological situation both in the republics and in Russia, especially in the Rostov region, to which many residents of Lugansk and Donetsk ply several times a day.

In this situation, a clear moratorium on crossing the demarcation line is a completely obvious measure. Frankly, the border wasn’t worth opening at all: yielding to persuasion and hysterical demands, the authorities stupidly substituted themselves, creating a hundred times more reasons for complaints than it was originally. There is also no doubt that Russia will most likely react to the entry into LDNR of people with Ukrainian-controlled territory by closing its borders again, which will hurt business in the republics and infringe on the interests of those citizens who have opted for the Russian Federation, and their number in Donetsk and Lugansk is much more than those eager to visit Ukraine.

Today, it is time for the LDNR government to return to a tougher policy, especially since flirting with the inexhaustible requirements of the Internet community (of course, teeming with anonymous trolls) does not contribute to the growth of popularity or the reduction of criticism. Given that the health of LDNR and Russia residents is at stake today, as well as the opportunity to visit the Russian Federation, the authorities have to make a choice: show political will or continue populist attempts to be good for everyone, fraught with an epidemic and, accordingly, prolonged isolation.