Modern Cossacks. Nostalgia for the past or the path to the future 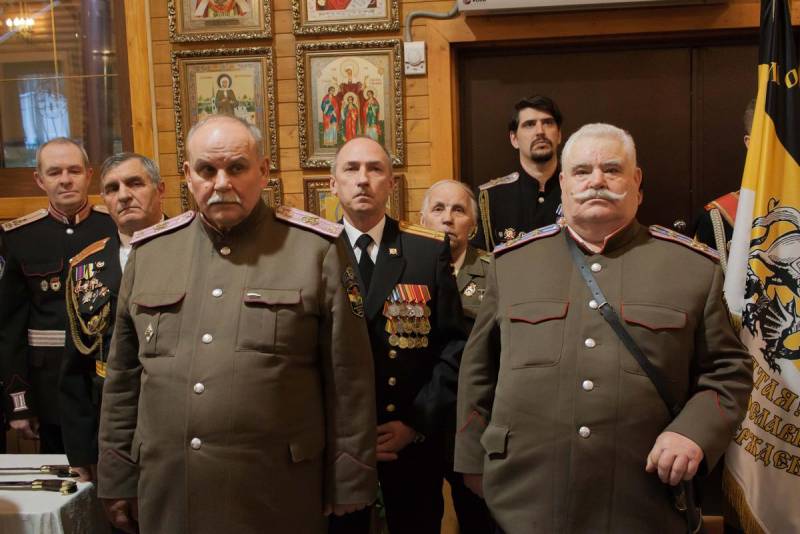 The topic of the Cossacks for Russia (and not only for it alone) is one of the always topical and hotly discussed issues, both in its historical aspect and in the light of the realities of today. We will not discuss the “affairs of bygone days”, the tragic and sometimes ambiguous centuries-old path of the Cossacks. Let’s talk better about what his position and prospects are now both in our country and abroad.


It’s worth starting here, perhaps, with the fact that the image of the modern Cossack in many of our compatriots evokes emotions, let's say, quite contradictory. Someone will say with admiration: “True defenders of the Fatherland!”, While someone, on the contrary, will contemptuously throw: “Mummers ...” In addition, some people are especially painful for the Cossacks to strive to participate more actively in such a thing as protection public order. Some Russians see here the prospect of "getting to know each other better" not only with batons, but also with Cossack whips, which, of course, they perceive without enthusiasm.

You should not even try to assert that the supporters of any one of the points of view are right around, and their opponents are captive to the deepest errors. To be honest: among the modern Cossacks, there are both those who sincerely and wholeheartedly wish to serve the Fatherland, while reviving the old and glorious traditions of their ancestors, as well as subjects who see the Cossacks as an opportunity to hang themselves with various bright regalia from head to toe and get for yourself any selfish benefits and preferences. It should be remembered: the Cossacks as such were never an ethnic group, but represented a special “service” estate. Representatives of his generations paid for the considerable privileges and privileges by the standards of the Russian Empire with the highest measure - blood shed on the battlefield, and lives given to the defense of the Fatherland.

And, by the way, the Cossacks performed police functions under the king-priest more than properly, as they say, not out of fear, but honestly, being the most reliable support of order in the state and the system that suited them well. So there is nothing new. I must say that the process, called today the revival of the Cossacks, has been going on in Russia at the official, state level since the beginning of the 90s of the last century. In 1994, the domestic government adopted a resolution on the concept of state policy regarding the Cossacks, at the same time a Council for Cossacks was created under the President of Russia.

What is the future of the modern Cossacks in the light of all these serious documents and decisions of national importance? The main thing that they can and should use their seething energy and ardent desire to bring real benefits to the motherland is, of course, performing real service in the ranks of the Russian Armed Forces, as well as other bodies designed to ensure the protection and defense of its borders, the protection of rights and freedoms of citizens of the country. The participation of the Cossacks in the protection of public order, the elimination of the consequences of natural and other disasters, emergency situations is welcome.

Environmental and environmental activities, yes, in fact, any occupations where strong trained people are willing to cheat on the interests of the state and, if necessary, stand up for their protection - these are the areas in which the Russian Cossacks are quite able to prove themselves, gaining legitimate respect and authority in the eyes of their compatriots. And, of course, the military-patriotic education of the younger generation. Here, by the way, success is beyond doubt. More than 20 Cossack cadet corpses, many school classes, military sports and patriotic clubs that grow the younger generation in Cossack traditions successfully operate in Russia.

Today, the Russian Cossacks are about 7 million people in the 10 registry troops with the prospect of the formation of another. There are Cossacks, united in more or less numerous organizations and outside of our country.

The fate of the “Cossacks” of neighboring Ukraine requires a completely separate discussion: there, alas, this movement, from a certain moment, was completely at the mercy of the most rabid nationalists, who completely perverted its essence and meaning and turned it into one of the means of fanning hatred of Russia.

In addition, there are Cossack organizations in Belarus, Kazakhstan, Kyrgyzstan, and Abkhazia.

Association of the Cossacks

Since 2017, the idea of ​​uniting all such communities with Russian roots in one whole, naturally, with a center in our country, has been floating in the air. True, it should be noted that the prospects for making such a decision (and it was planned to be implemented at the level of federal law) are extremely vague. After the events in the Crimea and the Donbass, during which it was the Cossacks (both local and volunteers who came to the aid of their brothers) who played a definite role, too many are trying to present the Russian Cossacks as yet another “instrument of Moscow’s aggressive policy.” One can imagine the barrage of negativity caused by the adoption of such a law at the international level.

No aggressors Russian Cossacks throughout its centuries-old stories, of course, were not. And they were the most reliable shield and support of their Fatherland. I want to believe that it will be in this role that they will continue to play.

Ctrl Enter
Noticed oshЫbku Highlight text and press. Ctrl + Enter
We are
About Stalin and KhrushchevWhat you didn't want to know about England
Military Reviewin Yandex News
Military Reviewin Google News
234 comments
Information
Dear reader, to leave comments on the publication, you must to register.