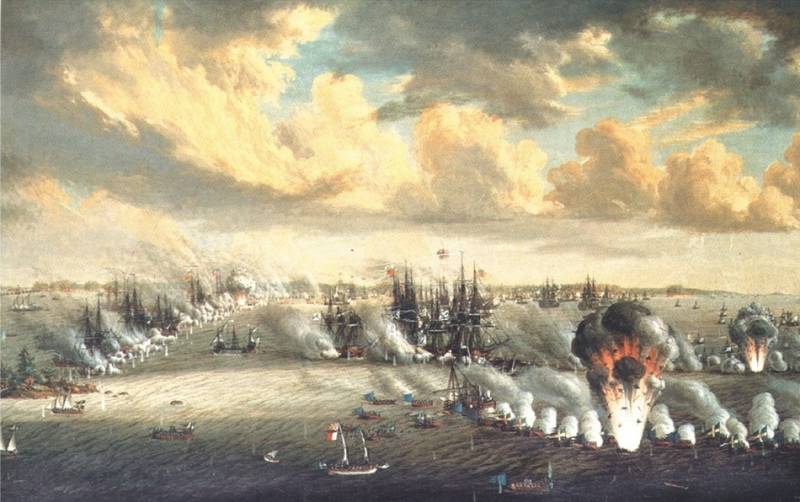 230 years ago, the Second Rochensalm battle took place. The Swedish fleet inflicted a heavy defeat on the Russian rowing flotilla under the command of Prince Nassau-Siegen. This allowed Sweden to make an honorable peace with Russia.

During the Vyborg battle (“How Chichagov missed the opportunity to destroy the Swedish fleet”) The Swedish ship and rowing fleet at the cost of heavy losses was able to break through and avoid complete destruction in the environment. The sailing ships of the Swedes went for repair in Sveaborg. The rowing fleet under the command of King Gustav III and the flag captain, Lieutenant Colonel Karl Olaf Kronstedt, remained in Rochensalm (Svenskzund). There was already a Pomeranian skher division - 40 ships. The Swedish command significantly strengthened the defense of the naval base. In particular, artillery batteries were placed on the islands. Swedish ships secured themselves in the raid with a powerful L-shaped system, anchoring. The Swedish flotilla numbered about 200 armed vessels, including 6 frigates and 16 galleys, according to various sources, 12,5-14 thousand crew members. The Swedes had here about 100 gunboats with 450 heavy guns. In addition, there were a large number of transports.

Thus, the Swedish flotilla stood in a strong position south of the large raid. The northern passage was blocked up, blocked. Between the large ships stood galleys and gunboats, on the flanks beyond the islands - bombardier ships. The islands have batteries. Flanks covered gunboats.

The Russian rowing fleet, which pursued the enemy, was commanded by Vice Admiral Karl Nassau-Siegen. The brave naval commander longed for victory. The prince had already beaten the enemy in Rochensalm in August 1789. The Russian ships approached Rochensalm on the night of June 28 (July 9), 1790, and decided to attack the enemy on the move, despite the unfavorable wind for our ships. Obviously, the Russian command underestimated the enemy, believing that the enemy was demoralized and would not show strong resistance. They also counted on superiority in naval artillery. Therefore, the Russians did not even conduct reconnaissance. The Russian flotilla numbered about 150 vessels, including about 20 rowing frigates, 15 medium vessels, 23 galleys and shebeks, over 18 thousand people.

Prince Nassau decided to attack from only one side (during the first battle of the Rochensalm attacked from two sides). In the morning, Russian ships attacked the southern flank of the enemy. At the forefront was Sliz with gunboats and floating batteries. In the midst of the battle, when our sailing vessels began to go in the first line, in the intervals between the ships of the rowing fleet, the gunboats of Slizov, due to the strong exhaustion of the rowers and the wind, were thrown onto the galley line. Story mixed up. The Swedish ships took advantage of this, went on a rapprochement and opened strong fire, which caused serious damage to the Russian ships.

The active fire of Russian floating batteries corrected the situation for a while. The ships began to take their places, the battle flared up with new force along the entire line. However, the wind intensified and interfered with the movement of our ships. The pitching did not allow aimed fire. Rowers fell from exhaustion. Swedish ships were anchored, shelling the enemy from behind the islands. The Russian flotilla suffered losses. After a five-hour stubborn battle, when part of the enemy flotilla began to bypass our ships, the Russian gunboats began to retreat south.

As a result, this time the superiority was on the side of the Swedes. The weather was unfavorable, Russian ships were thrown off by strong winds, their movement and maneuvering was difficult. The Russians came under heavy fire from coastal batteries and anchored Swedish galleys and gunboats. Then, skillfully maneuvering, the enemy gunboats switched to the left wing and attacked the Russian galleys. The Russian system was mixed, the retreat began. During the erratic retreat, most of the Russian frigates, galleys and shebeks were broken on the rocks, capsized and drowned. Some Russian ships anchored and resisted. But the enemy had the advantage, and they were burned or boarded.

On the morning of June 29 (July 10), the Swedes themselves attacked and drove the broken Russian flotilla away from Rochensalm. The Russians lost about 7400 people killed, wounded and captured. 52 ships were lost, including 22 large. The Swedes captured the Russian flagship - Katarina. The Swedish fleet lost only a few ships and about 300 people.

The commander of the Russian flotilla, Prince Nassau-Zigensky, admitted that the cause of the main defeat was his self-confidence and frivolity. He sent the Russian Empress all the awards and decorations bestowed on him. But Catherine was gracious and returned them with the words: “One failure cannot eradicate from my memory that you were 7 times the winner of my enemies in the south and in the north.”

It is worth noting that Rochensalm could not have a serious impact on the course of the campaign. The Russian armed forces retained the initiative. Having received reinforcements from Kronstadt and Vyborg, the Russian rowing flotilla returned to Rochensalm and blocked the Swedes. The Russians were preparing for a new attack on Rochensalm. The Russian army in Finland led an attack on Sveaborg, where the enemy's sailing fleet stood. The Russian ship fleet blocked Sveaborg. That is, the continuation of the war led to the complete defeat of Sweden.

However, the battle unsuccessful for the Baltic Fleet had major political consequences. The prestige of the king of Sweden and his fleet in Europe, shaken after Revel, Krasnaya Gorka and Vyborg, was restored. The battle of Svenskzund (in the Svenskzund Strait) is considered the most brilliant victory in the naval stories Sweden. The Swedes were able to start peace negotiations on equal terms. Catherine II, who from the very beginning looked at this conflict as an annoying obstacle in the war with Turkey, also did not want to continue the campaign. On 3 (14) August 1790, the Werel peace was signed. On behalf of Russia, the agreement was signed by Lieutenant General Osip Igelström, and on Sweden by General Gustav Armfelt. The two powers decided to maintain the status quo; no territorial changes occurred. Russia refused some formulations of the Nishtadt and Abo treaties, according to which Petersburg had the right to intervene in the internal affairs of the Kingdom of Sweden.

The Swedish monarch Gustav II wanted to achieve from Catherine II territorial concessions in Finland, and that Petersburg made peace with the Ottoman Empire. However, the Russian empress categorically refused. Stockholm had to come to terms and abandon the alliance with Turkey. Gustav quickly changed his tone and began to ask to restore fraternal relations. Rochensalm was a great success for Sweden, exhausted by the war. The Swedes did not have financial and material opportunities to continue the war. Swedish society and the army wanted peace. At the same time, Catherine the Great, wanting to restore friendly relations with her cousin ("fat Gu"), rendered him financial assistance. Gustav was preparing for a new war - with Denmark and revolutionary France. True, he did not have time to start a new war. Such a zealous king is already tired of the Swedes. In 1792, he became a victim of a conspiracy of the aristocracy (the king was shot dead).

Ctrl Enter
Noticed oshЫbku Highlight text and press. Ctrl + Enter
We are
Russia's struggle with Swedish revanchism at the end of the XVIII century. Rosensalm and VyborgLife and Adventures of Prince Nassau-Siegen, Russian Admiral
Military Reviewin Yandex News
Military Reviewin Google News
8 comments
Information
Dear reader, to leave comments on the publication, you must to register.