The death of the Russian army in the battle of Klushin 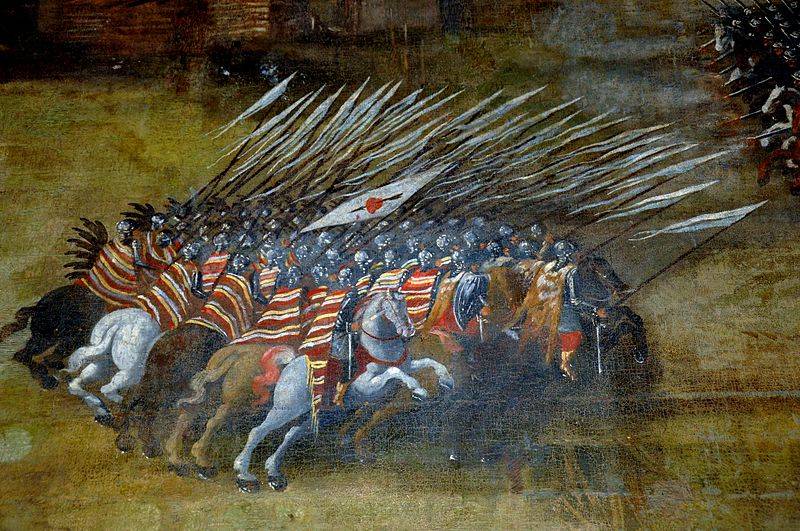 Attack of the banners of the winged hussars at the Battle of Klushin. Shimon Bogushovich painting

410 years ago, a battle took place between the Russian-Swedish army and the Polish troops. The battle of Klushin ended in disaster for the Russian army and led to the fall of Tsar Vasily Shuisky. In Moscow, the power was seized by the boyars, who let the Poles into the capital.

At the beginning of the XVI century, the Russian state was swept by the Time of Troubles, caused by subversive actions of part of the elite against the ruling Godunov dynasty and external interference. All this overlapped with a number of socio-economic problems and natural disasters that worsened the situation of the common people more than usual. The country was seized by riots, Godunovs were killed, the impostor seized the capital city, behind which stood Poland and the papal throne.

When False Dmitry was killed, the Time of Troubles did not end. New impostors appeared, the country was robbed and raped by a variety of gangs of Poles and Lithuanians, thieves' Cossacks. Tushinsky the thief besieged Moscow with his army. The country, in fact, broke up into two Russia, one swore allegiance to the Moscow Tsar, and the other to the "thief king" False Dmitry II. Tsar Vasily Shuisky, unable to cope with Tushino and Poles on his own, decided to seek help from Sweden. Shuisky needed Swedish mercenaries to free the capital from the siege.

The Swedes did not want that its competitor in the struggle for the Baltic region, Poland, intensified due to Russia. It was obvious that in the development of the current situation, the Poles would capture Smolensk, Pskov, possibly Novgorod and other cities. They even put their prince in Moscow. All Russia was subject to polishing (on the model of Little Russia). Sweden was threatened by an intensified Polish-Lithuanian Commonwealth. As a result, the Swedish throne decided to help Shuisky. It’s clear that it’s not free. Bargaining has begun. Negotiations with the Swedes were led by the royal nephew Skopin-Shuisky. In February 1609, an agreement was concluded in Vyborg with Sweden. The Swedes sent several thousand mercenaries under the command of Delagardi to help the Moscow Tsar, who were generously paid. Sovereign Vasily Shuisky renounced his rights to Livonia, and Sweden was promised the eternal possession of the city of Korel with a county.

In the spring of 1609, the Swedish army approached Novgorod and, with the support of the royal governor Choglokov, routed the Tushins. After that, the northern Russian lands and cities were cleared of gangs. Then the troops of Skopin-Shuisky and Delagardi moved to the rescue of Moscow. Skopin, having received help from Smolensk, defeated the enemy near Tver, and occupied Pereyaslavl-Zalessky. However, the Swedish mercenaries, when 130 miles were left before Moscow, refused to go further under the pretext that they were paid only for two months, and not for four, and that the Russians did not clear Korela. Tsar Vasily ordered the Korela to be cleared for the Swedes and gave the Swedes a large sum of money.

Meanwhile, Poland entered the war against Russia. The entry of Swedish troops into Russia was the reason for the war. Although large detachments of Polish lords, nobles and adventurers ravaged the Russian land since the time of the first impostor. In September 1609, the Polish-Lithuanian army besieged Smolensk (The heroic defense of Smolensk; Part 2) A large corps of Little Russian Cossacks arrived here. The Polish king promised to "restore order" in Russia at the request of the Russian people themselves. Smolensk fortress, despite the fact that the most combat-ready part of the garrison was aimed at helping Skopin, withstood enemy attacks. Poles planned to take the fortress on the move, there were few infantry, and there was no heavy artillery for a long siege (they had to be brought from Riga). A long siege began.

Tushino camp was falling apart. False Dmitry, who became hostage to the Polish lords, fled to Kaluga and began to gather a new army. The Tushino Patriarch Filaret, nobles and Poles sent an embassy to Sigismund. The Polish king himself wanted to take the Moscow throne, but decided to deceive the Russians and began negotiations on his son Vladislav. In February 1610, an agreement was adopted. Vladislav was to become the tsar (although Sigismund retained the opportunity for himself to become a Russian sovereign), the Russian faith remained untouchable. As a result, the Tushino camp finally collapsed. The Cossacks fled wherever, partly to their native places, partly to Kaluga, partly simply to “thieves”. The Poles reached for the royal camp. Partly Russian noble Tushins went over to Vasily, the other part with Patriarch Filaret (he was captured on the way by the Russian-Swedish troops) moved to Smolensk to Sigismund.

In March 1610, Skopin-Shuisky and Delagardi solemnly entered Moscow. Ordinary city dwellers with tears fell to the ground, beat their foreheads and asked to clear enemies of the Russian land. Contemporaries compared Skopin's reception with the triumph of David, whom the Israelites honored more than King Saul. However, Tsar Vasily was pleased with his nephew. The brother of the tsar, Prince Dmitry Shuisky, the unfortunate royal governor who did not win a single battle, behaved differently. Tsar Vasily did not have sons; daughters died in infancy. Dmitry was considered the heir to the throne. In Skopin, Dmitry saw a competitor whom the people loved. With the mess of that time, Skopin could well have taken the throne. A young national hero, beloved by the people and warriors, a talented commander.

On the occasion of the victory, feasts were held almost every day in Moscow. On April 23, 1610, a young commander was invited to a feast at the Vorotynsky on the occasion of the christening of the son of Prince Ivan Vorotynsky. The godfather was to become Skopin. The godmother was the wife of Prince Dmitry Shuisky, Catherine (daughter of the oprichnik Malyuta Skuratov). From her hands the commander took a bowl of wine at the feast. After drinking it, Shuisky suddenly felt ill, blood poured from his nose. After a two-week illness, he died. Contemporaries blamed Skopin for Vasily and Dmitry Shuisky, who feared for their power.

Skopin’s death was a disaster for Vasily Shuisky. Russia lost the best commander at that time, whom the soldiers adored. There were rumors in the capital about the assassination of Skopin-Shuisky by the king and his brother, demoralizing the troops. At this time, a campaign was being prepared for liberation from the siege of Smolensk. The king appointed his mediocre brother Dmitry the army commander. Apparently, he hoped for other governor and Swedes. 32 thousand Russian soldiers and 8 thousand Swedish mercenaries (Swedes, Germans, French, Scots, etc.) moved to Smolensk. Previously 6 thousand a detachment of the tsarist voivode Valuev and Prince Eletsky occupied Mozhaisk, Volokolamsk and walked along the big Smolensk road to Tsarev-Zaimishch.

The Polish king sent part of his troops under the command of the hetman Zholkevsky to meet the Russian-Swedish rati. Only about 7 thousand soldiers, mostly cavalry, without infantry and artillery. The rest of the Polish army continued the siege of Smolensk. Stanislav Zholkevsky was the most talented Polish commander. He was already an old military leader, beat the Swedes, Cossacks and Polish rebels. June 14, 1610 Zholkevsky besieged Tsarevo-Zaimishche. The governor Valuev sent for help to Shuisky, who was in Mozhaisk with the army. The Russian army slowly began the offensive and became a camp near the village of Klushino, the governors were “scared” of the heat. 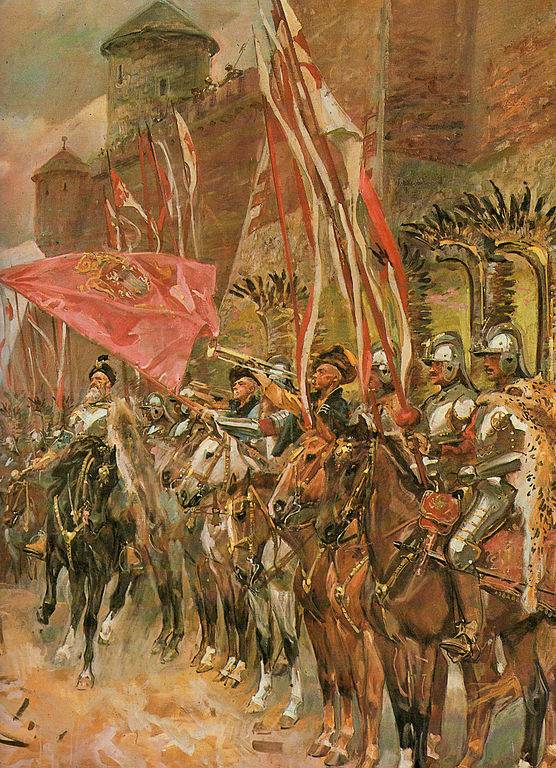 Zholkevsky divided his corps. A small detachment (700 soldiers) continued the blockade of Valuev in Tsarevo-Zaimishte. The main forces went to Klushin, 30 miles from Tsarev-Zaimishch. The Polish commander took a big risk. Under skillful leadership, the allied army could crush a small Polish corps. Risk is a noble cause. Zholkevsky took a chance and won. At this time, the allied commanders, Dmitry Shuisky, Delagardi and Horn, were drinking, confident in a future victory. They knew that the enemy was small and planned the next day to launch an offensive and topple the Poles. On the night of June 24 (July 4), 1610, Polish hussars attacked allies who did not expect an attack. At the same time, crossing the dense forests was difficult, the Polish troops stretched out and concentrated for a long time, which saved the Allies from immediate defeat. Two single Polish cannons (falconet) stuck in the mud.

Russian cavalry fled. The infantry settled in Klushin and met the enemy with strong gun and cannon fire. At first, the mercenaries stubbornly fought back. Shuisky and Delagardi ruined stupidity and greed. On the eve of the battle, the mercenaries demanded the money they deserved. Shuisky had money in the treasury. But the greedy prince decided to postpone the payment in the hope that after the battle he would have to pay less. Zholkevsky learned about this from defectors. At the critical moment of the battle, when the Russians could come to their senses and use great numerical superiority, the Polish commander offered the mercenaries a large sum. The Scots, French and Germans immediately sided with the Polish hetman. Other mercenaries were promised life and freedom if they did not fight against the Polish king, and they left the scene of the battle.

Upon learning of the betrayal of the mercenaries, the Russian commander shamefully fled. Other governors and warriors followed. The army fell apart. The Swedish soldiers, led by Delagardi and Gorn, went north to their border. The Poles did not bother them. Thus, Zholkevsky won a complete victory. He captured the entire Russian artillery, banners, wagon train and treasury. Valuev in Tsarevo-Zaimishche, learning about the terrible defeat, surrendered and kissed the cross to Prince Vladislav. Following the example of Tsarevo-Zaimishch, Vladislav was sworn to Mozhaysk, Borisov, Borovsk, Rzhev and other cities and settlements. 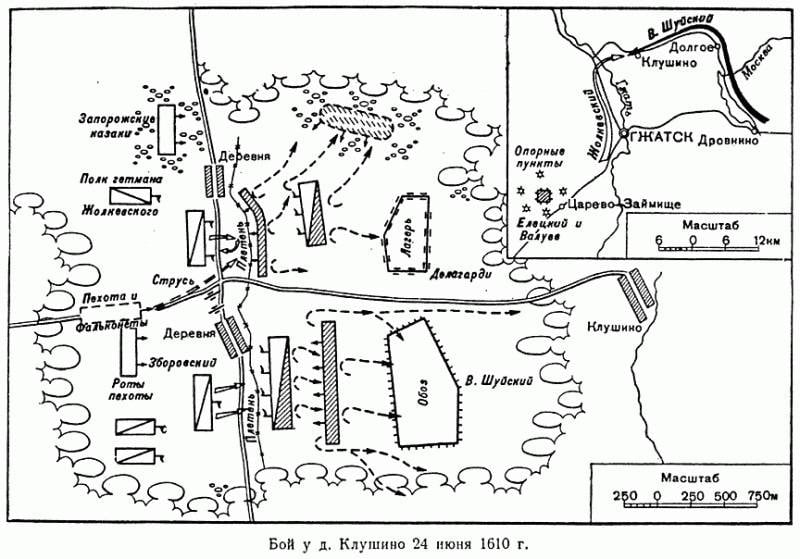 The scheme of the battle at the village of Klushino on June 24, 1610. Source: E. A. Razin. History military art
It was a disaster for Tsar Vasily. About 10 thousand Russian soldiers joined the Zholkevsky army. True, Zholkevsky himself could not take the Russian capital, he did not have enough strength. Near Moscow, Shuisky had about 30 thousand more soldiers. True, their morale was low, they did not want to fight for the Shuiskys. Vasily Shuisky in a panic asked for help from the Crimean Khan. The Tatar corps with Kantemir-murza approached Tula. Cantemir took the money, but did not want to fight the Poles. He ravaged the neighborhood, captured several thousand people full and left.

In Moscow, a conspiracy was led against the tsar, led by the princes Fedor Mstislavsky and Vasily Golitsyn. They were joined by former Tushino boyars led by Filaret, whom Vasily spared. July 17 (27), 1610 Vasily Shuisky was overthrown.

On July 19, Basil was forcibly tonsured a monk. "Monk Varlaam" was taken to the Miracles Monastery. The Boyar Duma has created its own government - "Semiboyarschinu". The boyar government in August concluded an agreement with the Poles: Vladislav was to become the Russian Tsar. In September, Polish troops admitted to Moscow. Shuysky was taken to Poland as a trophy and forced to take an oath to Sigismund. 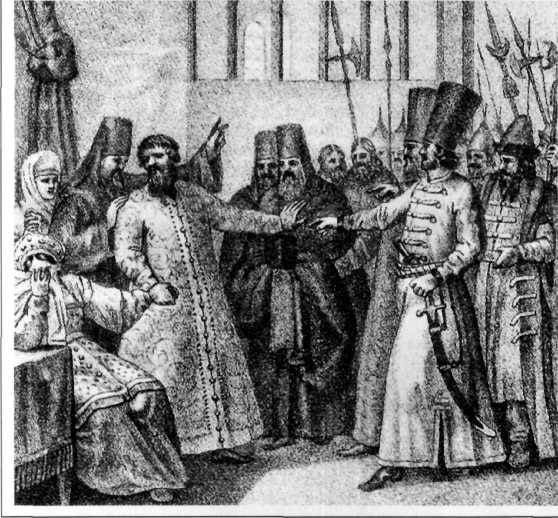 Ctrl Enter
Noticed oshЫbku Highlight text and press. Ctrl + Enter
We are
How did the Polish invasion begin? Completion of the liberation of Moscow by the army of Skopin-Shuisky: the battle on the Karinsky field and near DmitrovCossacks in Time of Troubles
Military Reviewin Yandex News
Military Reviewin Google News
22 comments
Information
Dear reader, to leave comments on the publication, you must to register.