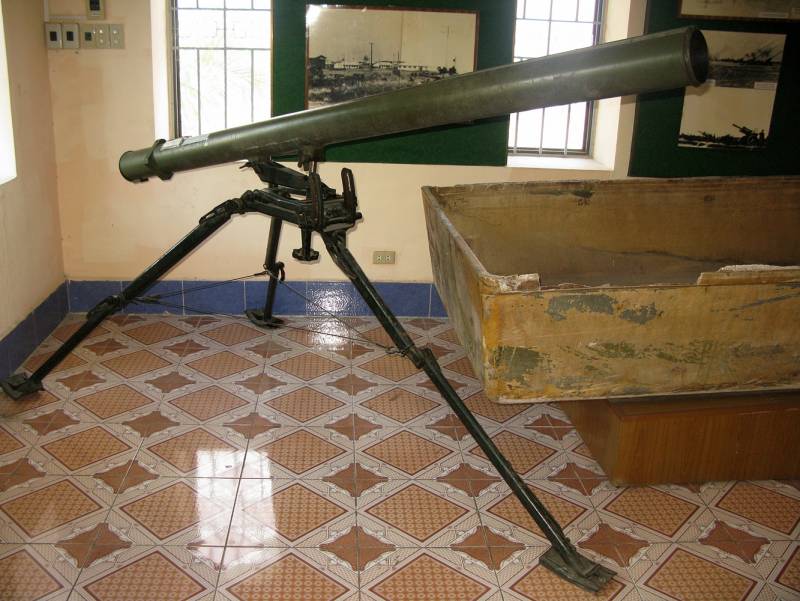 Launcher 9P132 in one of the Vietnamese museums. Wikimedia Commons Photos

The USSR actively supported North Vietnam with the supply of material parts. Among the other samples supplied to the ally was the Grad-P light reactive system, created at his request. This product combined small dimensions, ease of use and the power of shells of the Grad full-size multiple launch rocket system.

In 1965, the leadership of the Democratic Republic of Vietnam addressed the USSR with an unusual request. The Vietnamese army needed a new artillery system with increased projectile power, but easy to handle and suitable for transportation over complex landscapes. Preference was given to reactive systems that have already shown their potential.

The Soviet leadership went towards a friendly country and launched a new project. A group of domestic enterprises headed by NII-147 (now the NPO “Splav”) was instructed to create a lightweight weapons complex, unified with the 9K51 Grad MLRS. The new product received the code "Grad-P" ("Partizan").

Already in July 1965, an experimental launcher and shells for it were presented for joint tests. According to their results, Grad-P was recommended for production in a series. In addition, the command considered it possible not only to send such a system abroad, but also to take into service the domestic special forces. 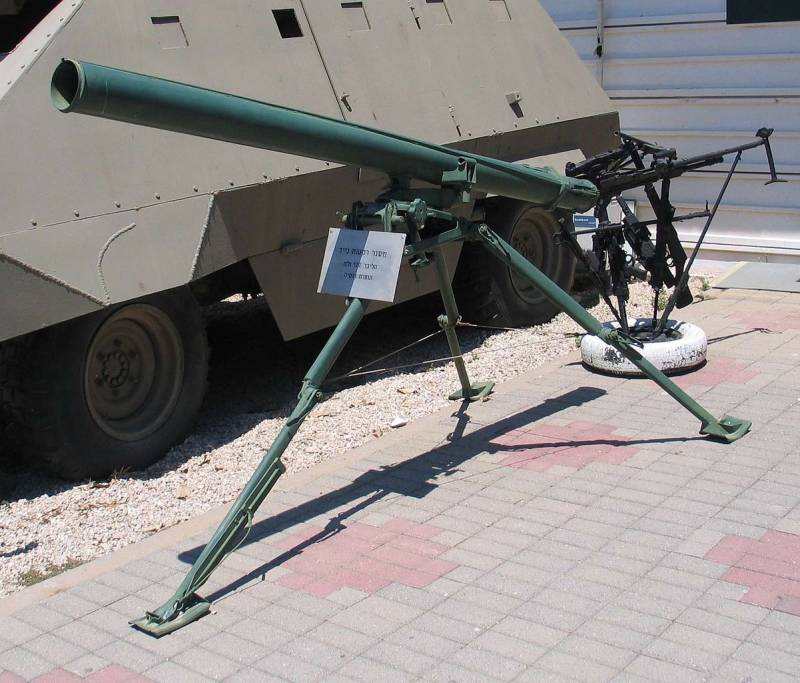 Trophy "Grad-P" in Israel. Wikimedia Commons Photos
At the end of that year, mass production began. The first 20 reactive systems and ammunition for them were completed by the beginning of 1966. In the following months, another 180 items were assembled. By the end of spring 1966 they were sent to a foreign customer. During the second half of the year, another order was executed for 200 complexes. The plan for 1967 provided for the manufacture of 300 Grad-P products with storage - if necessary, they were planned to be delivered to one or another customer. They were mainly shipped by the DRV, and further mass production continued.

The basis of the Grad-P system was the 9P132 launcher. When it was created, the need to reduce dimensions and mass was taken into account when obtaining sufficient combat characteristics. In addition, the product was made collapsible, which simplified transportation over difficult terrain.

The main component of the installation is a tubular guide-barrel of 122 mm caliber with a U-shaped spiral groove. In fact, this part is a “Grad” trunk, shortened to 2,5 m. On the rail there were means of an electric launch control system.

The barrel was fixed on the cradle of a simple design, mounted on the machine. The lightweight machine had three folding legs; the front was equipped with a coulter. There were manual horizontal guidance mechanisms. Horizontal movement of the trunk was carried out within a sector with a width of 14 °. Vertical interference - from + 10 ° to + 40 °. For aiming, the PBO-2 sight and the compass were used.

The shooting was carried out using a sealed remote control with a cable 20 m long. When the start button was pressed, the remote control generated an electrical impulse responsible for igniting the projectile engine. During the launch, the crew was at a safe distance from the installation.

The design of the projectile 9M22M. Figure Missilery.info
The barrel-guide had a mass of 25 kg, the machine - 28 kg. They were transported separately in two packs; a few more packs were given for ammunition. It took no more than 2-2,5 minutes to assemble or disassemble the launcher at the firing position. Calculation system - 5 people. In the stowed position, the calculation numbers separately carried the barrel, machine tool and several rockets.

The first ammunition for Grada-P was the 9M22M missile, developed on the basis of the M-21OF product for the basic Grada. The new shell had a length of 1,95 m and was distinguished by a collapsible body. The warhead with the warhead was borrowed unchanged from the M-21OF; the engine compartment was a shortened version of the existing one. In the tail were stabilizers deployed in flight. The projectile weighing 46 kg carried 6,4 kg of explosive and could show a range of up to 10,8 km.

In 1968, NII-147 and other enterprises modernized Grada-P, during which a 9M22MD long-range projectile was created. In general, he retained the basic design, but received an increased engine charge with the replacement of the brand of gunpowder; nozzles also changed. The firing range was brought up to 15 km. However, the use of 9M22MD required additional preparations. A weight of at least 50 kg had to be placed on the front leg of the machine - otherwise the installation could roll over due to the greater energy of the projectile.

Also, specifically for the "partisan" system, a 9M22MS projectile with incendiary equipment was developed. The missile part of the projectile was taken unchanged from 9M22M, the combat part was borrowed from the full-sized 9M22C for Grad. According to flight characteristics, an incendiary shell corresponded to a high-explosive fragmentation. 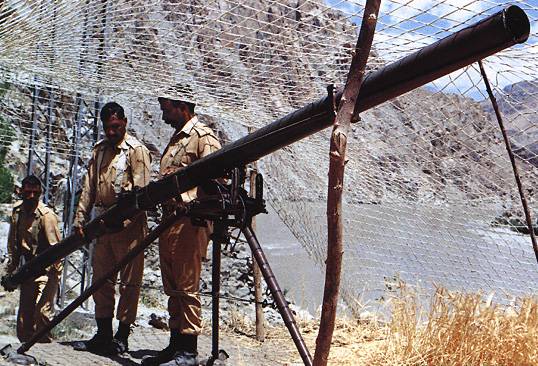 Iranian copy of the Soviet Grad-P. Photo Missilery.info
If necessary, the 9P132 installation could launch standard projectiles of Grad MLRS, which was confirmed by testing. However, the specifics of the launcher did not allow to realize all the advantages of such ammunition. Similar methods of using Grada-P turned out to be inappropriate.

The first Grad-P products were sent to the DRV at the end of 1966. In just a few months, the Vietnamese gained experience in their operation, and by the end of the summer of 1967 made proposals for modernization and further development of the design.

A request was made for an additional reduction in the mass and dimensions of the complex. They also asked to increase the firing range - this was done in the 9M22MD project. There were complaints about the reliability of the firing controls. They suggested making a new launcher with three or four rails to reduce the intervals between launches and, accordingly, the risks for the calculation.

Some of the proposals were implemented, while others did not advance beyond the tests. So, at the test site, the modification of the 9P132 product with a trunk shortened to 2 m was checked (weight decreased by 2,8 kg). Such a reduction in barrel length did not impair the accuracy and accuracy of the fire. They also collected a double-barreled version with shortened guides. Tests have shown that such an installation is more complicated and heavier, has limitations on the aiming angles and requires an increase in calculation. All this was considered unacceptable, and the installation was left single-barrel.

The first serial "Grad-P" went to the DRV and immediately found application in various operations. Supplies of such weapons lasted until the early seventies. It was transferred more than 950 complexes and thousands of shells for them. Depending on the need, Vietnamese artillerymen used both standard and extended range projectiles and Grad rockets. 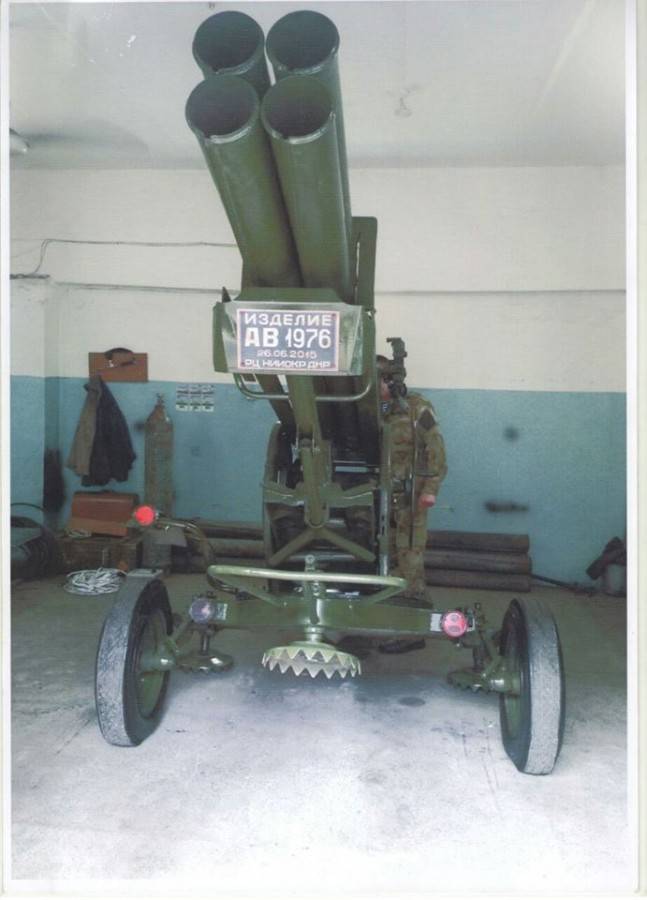 "Fantasy on the theme" performed by gunmen of the DPR. Photo by Ru-artillery.livejournal.com
Light launchers and shortened missiles were regularly used in firing raids on enemy targets with some success. Such weapons showed the best results when massed against large targets, such as airfields. The ability to disassemble and the relatively small mass allowed the system to be delivered to the firing position along mountain and forest paths, and then strike from an unexpected direction.

Subsequently, Grad-P was actively supplied to other friendly countries, and some of them used it in battle. In particular, the Cuban army became one of the operators - its gunners worked quite actively during the African conflicts. In the Middle East, the Palestinian Liberation Organization has become the main user. In addition, 9P132 were supplied to Iran and produced by them independently.

Partisan reactive systems are still used in local conflicts. So, since 2014, the use of such weapons in the Donbass conflict has been regularly reported. In the same period, the first cases of the use of "Grad-P" in Yemen are noted.

According to various sources, Grad-P also entered service with some special forces of the Soviet army, but it was not widely used. For their own needs, the USSR could use more advanced models.

The product "Grad-P" occupies a special place in stories Soviet missile weapons. It was created at the specific request of a foreign customer and therefore received a special look. At the same time, the system showed rather high operational and combat characteristics - although it could not be compared with full-fledged MLRS using standardized ammunition. However, practice has confirmed that such “partisan” weapons can be very useful in local conflicts.

The Grad-P system has long been discontinued, but still remains in service with a number of countries and armed groups. In addition, in current conflicts, reactive systems based on the Grada-P concept have become widespread. It is unlikely that the DRV military could imagine that their request for help would lead to the formation of ideas that are so tenacious and useful in certain conditions.