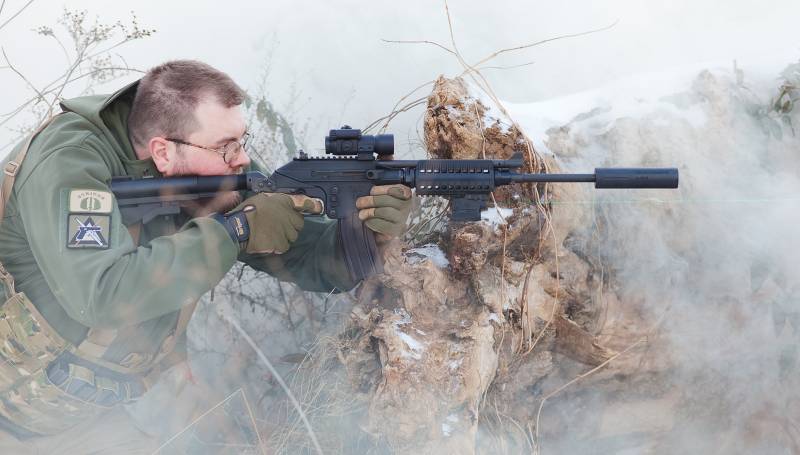 One of the Kel-Tec SU-16E rifles in action

Believe me, means known
So that finally everything at once fell into place.
No one will say anything bad, but who decides to say
Immediately and immediately fall.
Dear boy. 1974 Music by D. Tukhmanov, lyrics by L. Derbenev

Weapon and firms. Within the framework of this cycle, many samples of the most original small arms of our time have already passed. Issued by both large firms and small producers, which, however, did not affect their quality. Such are people: they want a choice, and they are afraid of the opportunity to choose, they can’t decide to make this choice, swear that their eyes are wide, that it’s specially done to entice money, and yet they want the opportunity to have this choice. All the same applies to weapons. That is why dozens, perhaps already, hundreds of companies that exist on the most modern leasing equipment saturate its market with its most diverse models exist today. 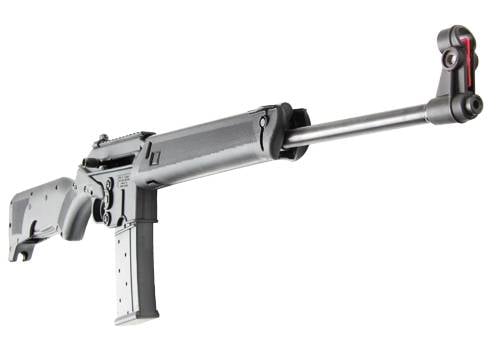 One of the first “dryers” - SU-16 for cartridges 5.56 × 45 mm
And at the forefront, as always, is the USP - a “unique selling proposition”, that is, what distinguishes one type of weapon from another. About one they write that this is the top of reliability, not inferior to the famous "Russian Kalashnikov", and "people-security people" are right there: they are attracted by the magic word: reliability! Say: “We have an original design!” And people who do not want to be like everyone else will stand in line for you. There are buyers of the "first minute", there are buyers of the "last". But the article is not about this, but that the innovative company, analyzing the potential audience and the market in this way, can always find its niche, even if it is very narrow, and successfully develop in this segment of it. Examples?

That's how they add up, and the butt can be used to store two stores
Yes, at least the American company Kel-Tec CNC Industries Inc., which is briefly called Kel-Tec. This company was founded by George Kellgren in 1991, it is located in Cocoa, Florida, and began to produce firearms in 1995. They started with semi-automatic pistols, then included rifles in their assortment, and then shotguns. George Kellgren, owner and chief engineer of Kel-Tec, is a Swedish designer who previously worked for Husqvarna, Swedish Interdynamics AB (in Sweden), as well as Intratec and Grendel, and was involved in the development of a number of firearms.

SU-16C folded
Well, today the company is engaged in the creation and production of a wide range of models of firearms, ranging from the same semi-automatic pistols to semi-automatic rifles and shotguns. And each new sample was developed by George Kellgren in accordance with the important, in his opinion, principle, according to which each new development should be innovative in its design and ... interesting to use.

With an elegant movement, the SU-16C rifle turns into ...
So, the company developed a carbine pistol with a retractable butt under the .22 caliber cartridge and with a magazine in the pistol grip CMR30 - compact and very convenient to use, with a Picatinny rail for the entire length of the receiver. Weight is only 1,7 kg, store 30 rounds. Barrel length 408 mm. Its feature is also a double, and also folding, shutter handle, both left and right. 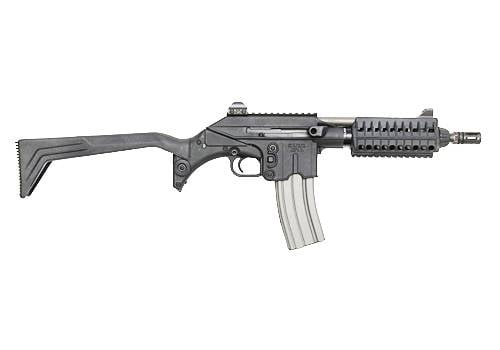 A very short drying model
The RFB rifle stands for Rifle, For-ejecting Bullpup, but there is a “bullap with extraction forward”. And the originality of the RFB lies in the fact that, using 7.62 × 51 NATO ammunition, it is equipped with a proprietary cartridge ejection system through the tube above the barrel forward. With a total rifle length of 698 mm, the barrel length is 470 mm. RFB is positioned by the company as the safest “bullpup” among all ever created, because the breech is separated from the shooter's face by two layers of steel 1,6 mm thick each. But even if a chamber rupture occurs, this again does not threaten the arrow: the device of the rifle is such that the gas stream rushes down through the store’s shaft and does not hit its face. The Hunter model had a barrel length of 610 mm, but without a flame arrester. Bipod, silencer - all this is installed on them! The fuse button is located on both sides. 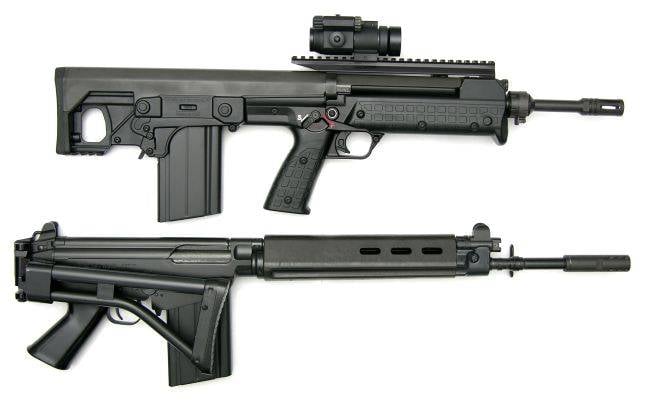 RFB rifle next to the FAL rifle
Was prepared and a whole series of rifles SU16 - SU16A, B, C, CA, D9. All very light, about 2 kg. All are semi-automatic, have a gas vent drive and use stores from the AR-15, but structurally the rifle is completely different. Thanks to the long shutter speed, its automation works very smoothly, and the shooting is accurate. On some rifles, the butt is made folding, which reduces the overall size of the weapon. But that is not all. Their fore-end is retractable and can turn ... into bipod! The rifle is also disassembled in an original way: the butt is folded out of it, the lid of the receiver is removed, after which the shutter with a gas tube can be removed.

Shutter and feed device for a cartridge or cartridge to the discharge line
In the area of ​​smooth-bore weapons, the company was noted for its exclusively original 12-gauge pump-action shotgun, also developed in several versions: KS7, KSG, KSG25, KSG Tactical and KSG Compact. The first of which was introduced in 2011. The weight of the first is 2,7 kg, the second is 3,1 kg, but KSG25 of them is the heaviest - 4,2 kg. All options are designed according to the “bullpup” principle and have a barrel-barrel magazine, a window for recharging which is located behind the pistol grip. All options differ in the number of cartridge tubes (KS7 - one, KSG - two), their length (KSG25) and, accordingly, capacity. 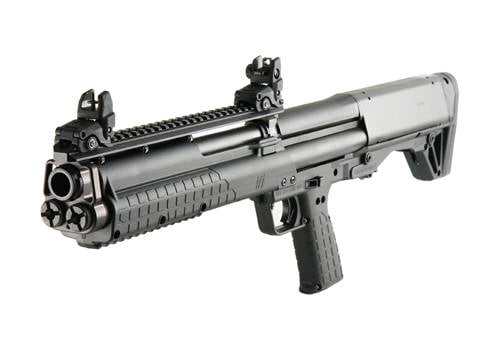 KSG. Left view
The most original is the KSG, although this is generally an ordinary smoothbore gun with pump-action reloading using a sliding fore-end, but it is made according to the “bullpup” scheme. And he has two tubular magazines that are horizontally under the trunk. Depending on the ammunition used, the number of cartridges of 12 caliber in stores may vary: 14 (7 + 7) cartridges of 12/70 caliber and 12 (6 + 6) cartridges of 12/76 caliber. Power when shooting comes from only one store. The magazine switch is located at the bottom of the receiver, behind the pistol grip. Moreover, if its leftmost or rightmost position indicates which magazine is serving, the middle allows the chamber to discharge when both magazines are full. The RSG25 has more capacity: 10 + 10 + 1 or 12 + 12 + 1, that is, 25 shots can be fired at its maximum! 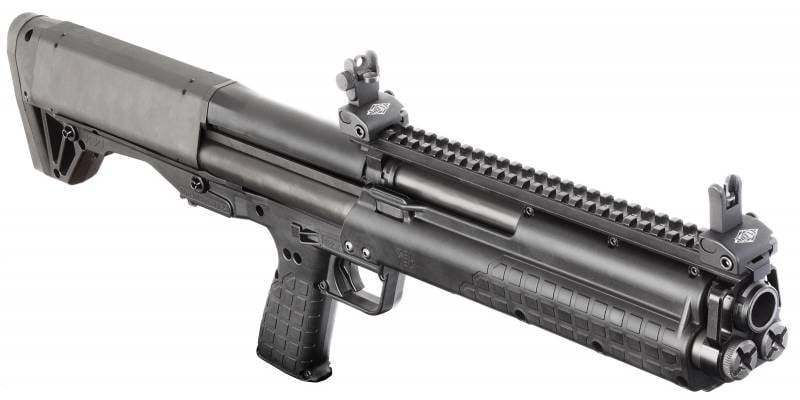 KSG. Right view
But perhaps the most original example from Kel-Tec is a pistol carbine - “clamshell” SUB-2000.

It was made on the basis of another carbine, SUB-9, through its maximum simplification, although its design did not differ in complexity. Well, SUB 9 was a development for a competition by the US Department of Defense, which needed a portable, light and cheap weapon to equip patrol and combat vehicle crews with it. The weapon passed the full range of all tests put to army weapons, but it was not accepted for service, including because of its too unusual appearance. But the money was spent, which means they had to be returned! So the designers did it this way: they simplified their competitive model even more, and so it turned out SUB-2000. 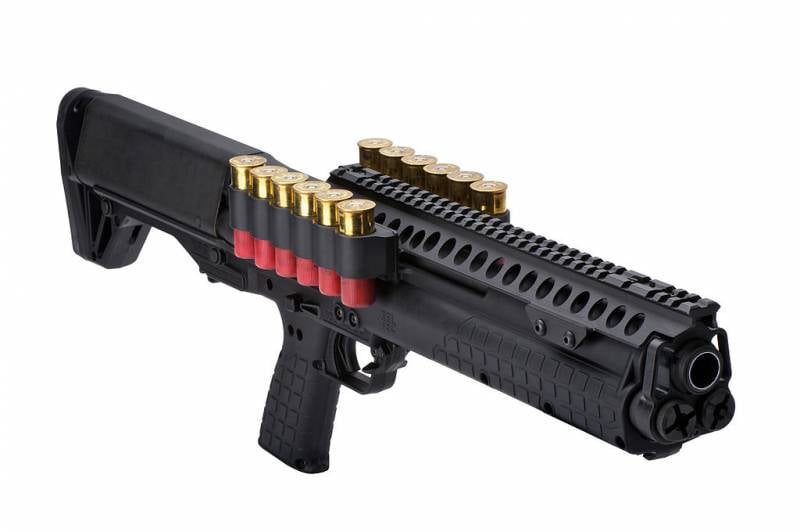 KSG2 with clips for extra cartridges
First of all, this weapon can be folded, in this position it is reduced in size by almost half. When folded, it can be put both in a backpack and in a travel bag, and it won’t take up much space in the trunk of a car, because its dimensions are only 40 by 10 centimeters. It can be folded in half a minute, and decomposed even faster, literally in seconds. 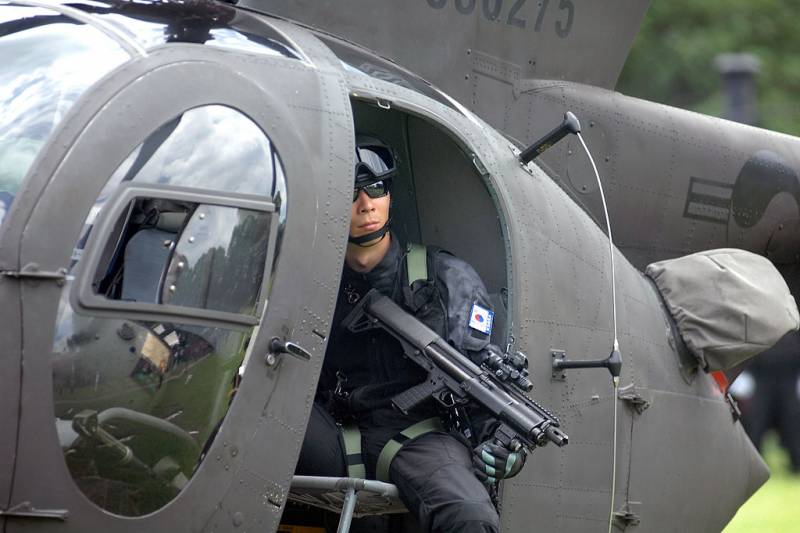 KSG in service with the South Korean Army
In fact, this carbine is a long pistol firing the popular 9x19 mm Parabellum cartridges, and with the receiver for magazines from the Glock 17 pistol, although magazines from other systems can also be charged with it. Its creators believe that thanks to this, the SUB 2000 will be interesting for travelers, including car travelers, for whom it can become an effective weapon of self-defense, as well as for hunting and entertaining and training shooting at the target. 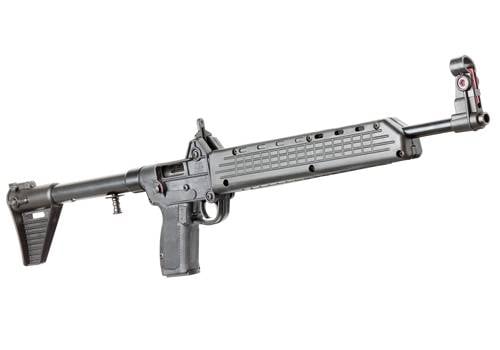 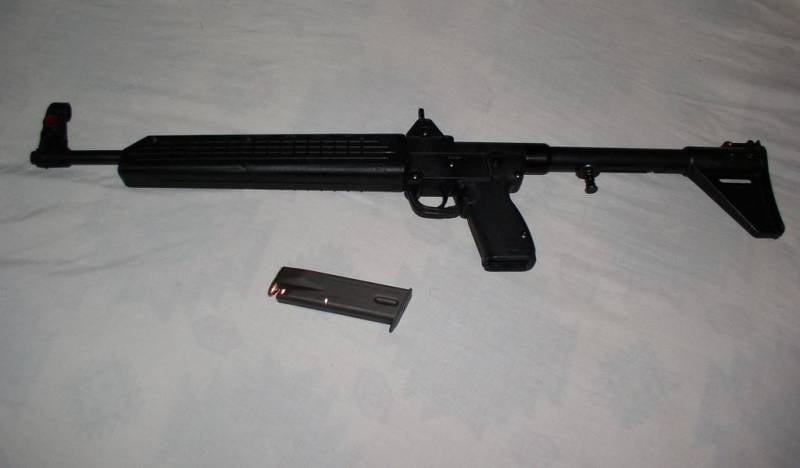 SUB-2000 with a 15-round magazine from the Beretta pistol
Automation of the carbine works on the principle of recoil of the free bolt, which has a long stroke, but the spring of which is shifted into the tubular butt, and is not located in the receiver, like most similar samples that are simply remade from pistols. USM trigger type provides fire with single shots and only self-cocking. But on the other hand, the effort of the platoon was made very minimal, which for non-automatic weapons gives a very high rate of fire - about 150 rounds per minute. The magazine is in the pistol grip, and the fuse with is located on the left side, above it. The sight is unusual and seems to be very simple, that is, unregulated, high, but it can fold back. But the huge fly at the end of the barrel, just like a Kalashnikov assault rifle, is very conveniently placed behind the butt. 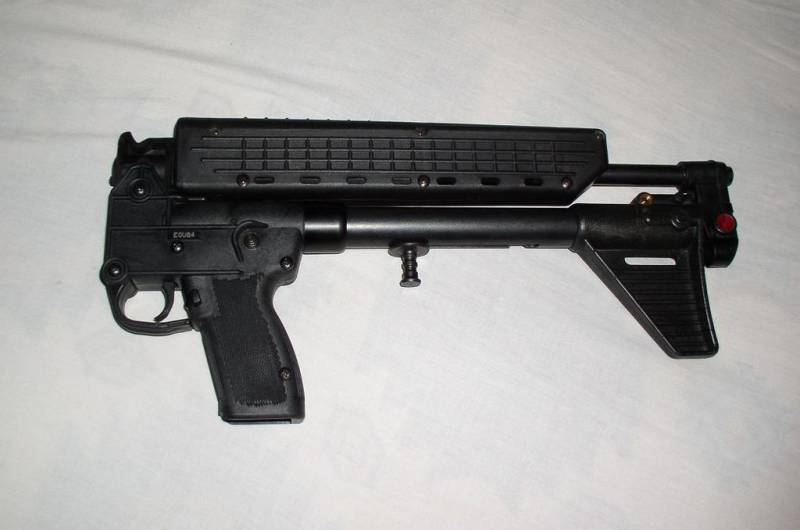 Folded
In addition to all these advantages, the price is also attractive in this weapon. The manufacturer recommends a price (in the USA) of $ 300 (which is comparable to the average price of a visit to a good restaurant)! And this is for a light, compact, rapid-firing, powerful enough, long-range enough (100-150 m) and ... killer weapons.