New, but not the best. Reflections on the new Vintorez

Since the beginning of the 90s of the XX century, almost immediately after the fall of the "Iron Curtain" on those interested history and the current state of affairs regarding small arms weapons The USSR and the new Russia collapsed a shaft of different information. All possible channels were open, and people suddenly began to learn about seemingly secret and unique samples developed by domestic designers.


The very first reaction to such information was euphoria: every sample is unique. Many people probably remember the series of articles in the suddenly appeared weapons and "somewhere nearby" magazines about "Russian whisper", "assault constructor for special forces", etc., etc. Time passed, unrestrained enthusiasm was replaced by more balanced estimates, and then louder and louder voices began to be heard about "hopelessly outdated", "not meeting modern requirements", "requiring modernization."

Omitting the question of by whom and on the basis of what arguments the decisions were made on the modernization of specific models, since this is a matter of a separate, long and thorough discussion, I would like to analyze in this material the result of the legendary modernization of faithfully serving the Soviet Union and then the Russian Federation " Vintoreza ".

The rifle was developed by the design team of TsNIItochmash under the leadership of Pyotr Ivanovich Serdyukov (08.12.1945/400/XNUMX). Designed to hit targets with a minimum level of unmasking shooter factors at ranges up to XNUMX m.

The rifle is automatic, allows firing as single shots, and bursts. The barrel is locked at six combat stops when turning the shutter. It is equipped with a PSO-1M2-1 optical sight and a 1PN51 night sight. On the receiver on the left side are marked the numbers of day and night sights, supplied with a rifle. The package includes five 10-charge magazines, an automatic belt 6Sh5 for carrying weapons, a cartridge pouch 6Sh18 for shops and spare parts, a pencil case with accessories for cleaning, an oiler and a ramrod.

Optical and night sights are mounted on a standard side bar located on the left side of the receiver. Installation and removal of sights are carried out without the use of a tool, they are carried out quickly and do not cause difficulties with the correct adjustment of the clamp. Contrary to popular belief, when reinstalling sights (even multiple), the battle of the rifle does not change. 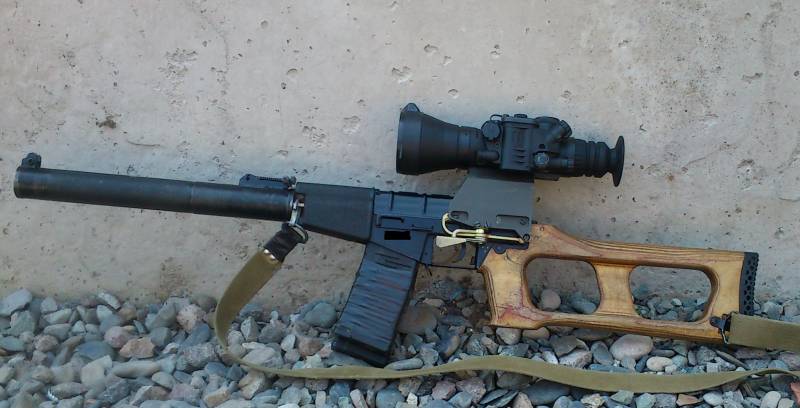 In addition to the optical, the rifle has a mechanical open sight, on the bar of which there are divisions from "10" to "42", corresponding to ranges from 100 to 425 meters. The resolution of the range setting is 25 meters.

All the splendor described above "stopped responding" and "required modernization." Immediate and, apparently, any. Including at all costs. 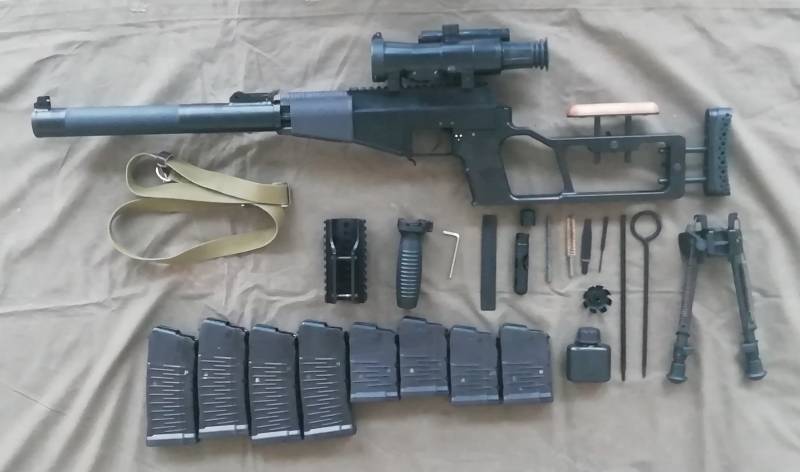 Of the visible changes, attention is immediately drawn to the new metal butt of the skeletal type with a butt pad adjustable in length and a cheek adjustable in height. The next visible difference is the lack of a side bar. Its function is now carried by the Picatinny rail mounted on the hinged lid of the receiver.

The PSO-1M2-1 sight now takes the 1P86 scope of variable magnification, which varies discretely, having two values: 1Х and 4Х.

Further changes relate to the configuration of the rifle. Now the set of the modernized Vintorez includes four 10-charge and four 20-charge stores. The latter is, obviously, a positive point, since firing from Vintorez and similar weapons is always carried out at short ranges, extremely rarely exceeding the 100-meter line, and in these situations the increased store capacity provides a significantly greater practical rate of fire. If before the fighters, by hook or by crook, sought to grab at least one “Valovsky” store on a business trip, now this issue can be considered closed. A little frustrating is the fact that the pouch for shops is not included in the package. I would like to believe that in the future this misunderstanding will be eliminated. As before, the kit includes a carrying strap for the rifle. In contrast to the 6Sh5 wide automatic belt that was previously included in the kit, which has high strength and is close to optimal rigidity, the BCCM is equipped with a narrow and extremely "nimble" belt. In addition, the VSSM rifle does not have a rear swivel, in connection with which the owner will have to fantasize on the topic "where to attach the belt." I must say right away that my imagination was not enough: it was not possible to find a place when attaching the belt to which the rifle was convenient to carry and the belt would not interfere with the manipulation of the weapon.

The bipod has become a completely new element with which the BCCM is equipped. The bipod is installed on the Picatinny rail. The slats are located on the bottom and on both sides of the split cage, which is worn on the muffler and fixed on it by tightening the cage screws. The design of the bipod and clips are such that the minimum height of the line of fire when firing from the bipod exceeds 220 mm and is excessive. "Creep" on the surface, minimizing the silhouette, when firing using the proposed bipod type "a la Harris" will not work. 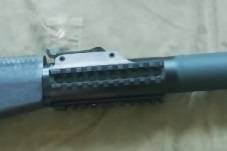 In addition to the bipod, other elements can be installed on the clip, for example, the handle included in the kit. The presence of a handle rifle in the kit is a moot point, since the rifle is not an assault weapon. To call the handle a drawback, of course, is by no means possible, but the desirability of installing it on a rifle is doubtful.

The last element that distinguishes the BCCM configuration from the previous Vintorez is an additional ramrod link. Now the ramrod is screwed in two parts and is almost twice as long, which makes it easy to clean the rifle muffler.

Ctrl Enter
Noticed oshЫbku Highlight text and press. Ctrl + Enter
We are
About Stalin and KhrushchevWhat you didn't want to know about England
Military Reviewin Yandex News
Military Reviewin Google News
52 comments
Information
Dear reader, to leave comments on the publication, you must to register.